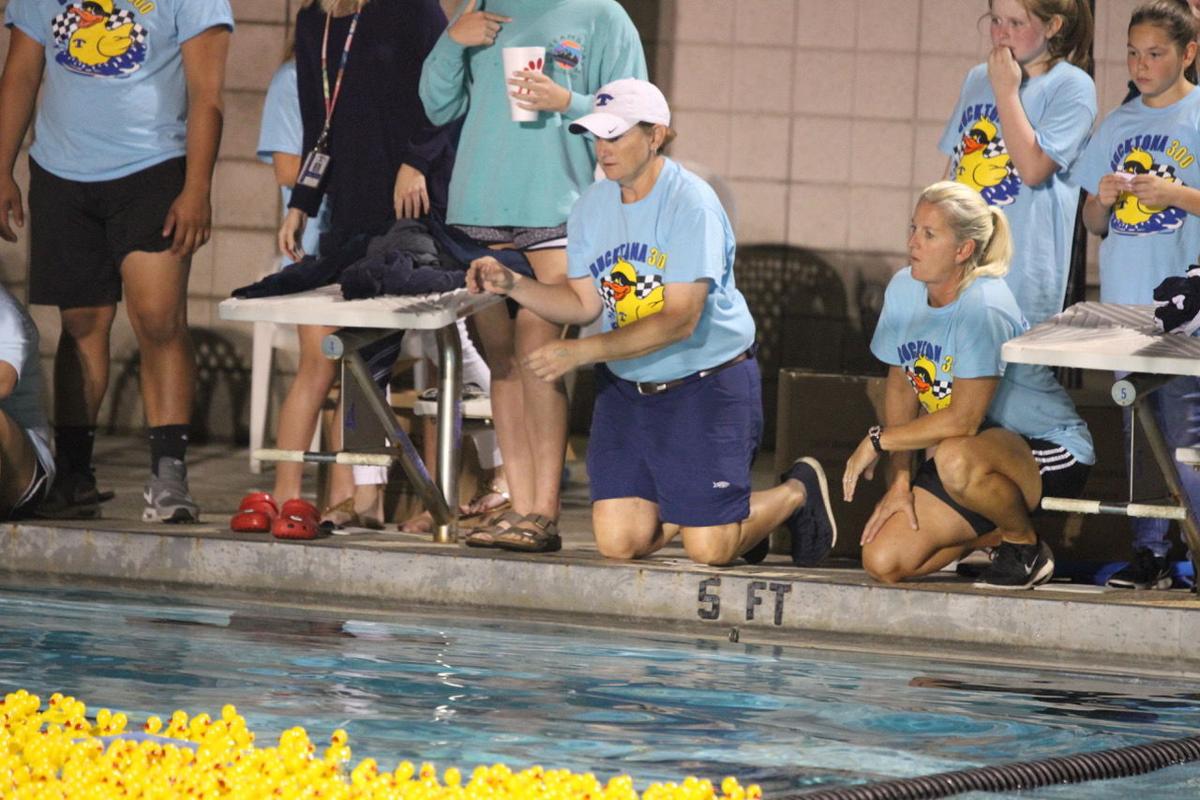 Ivey Vickers (left) and Teresa Walker wait for the winning duck to touch the finish line at the inaugural Ducktona 300 in 2018. 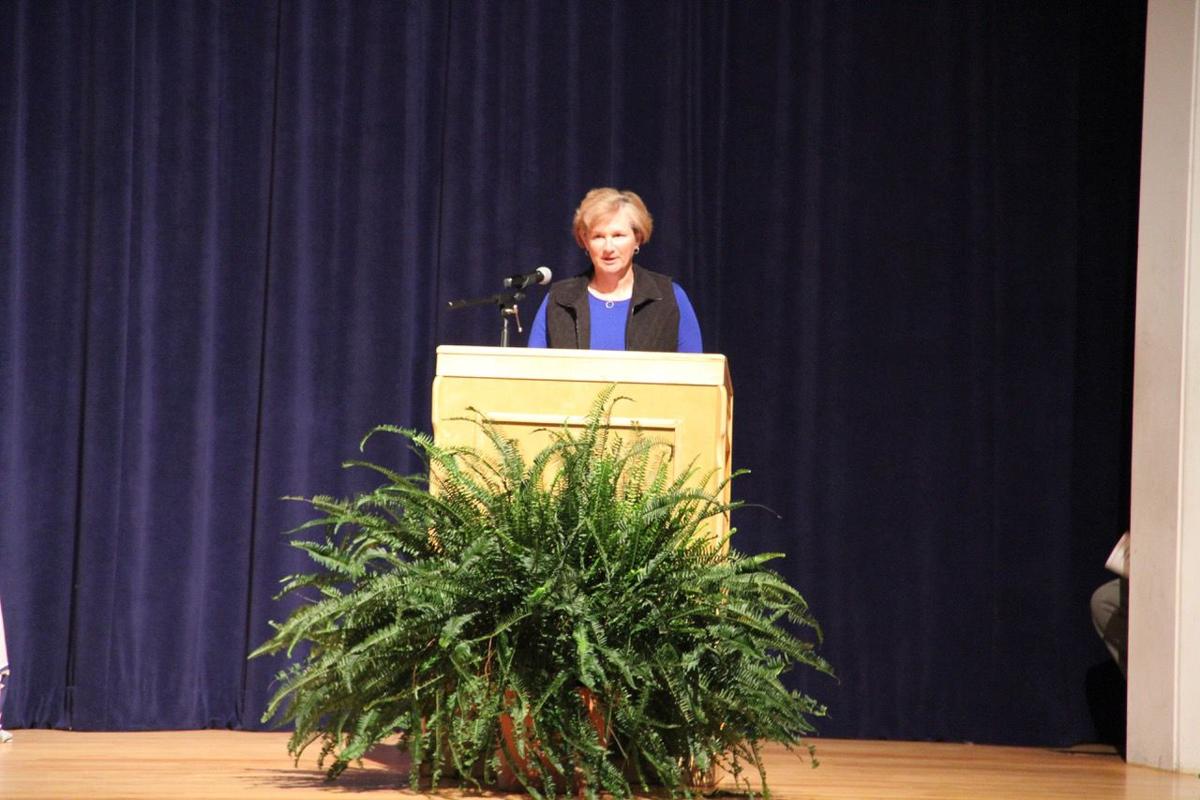 Ivey Vickers inducts her father Vic Vickers into the Tift Athletic Hall of Fame in 2016. 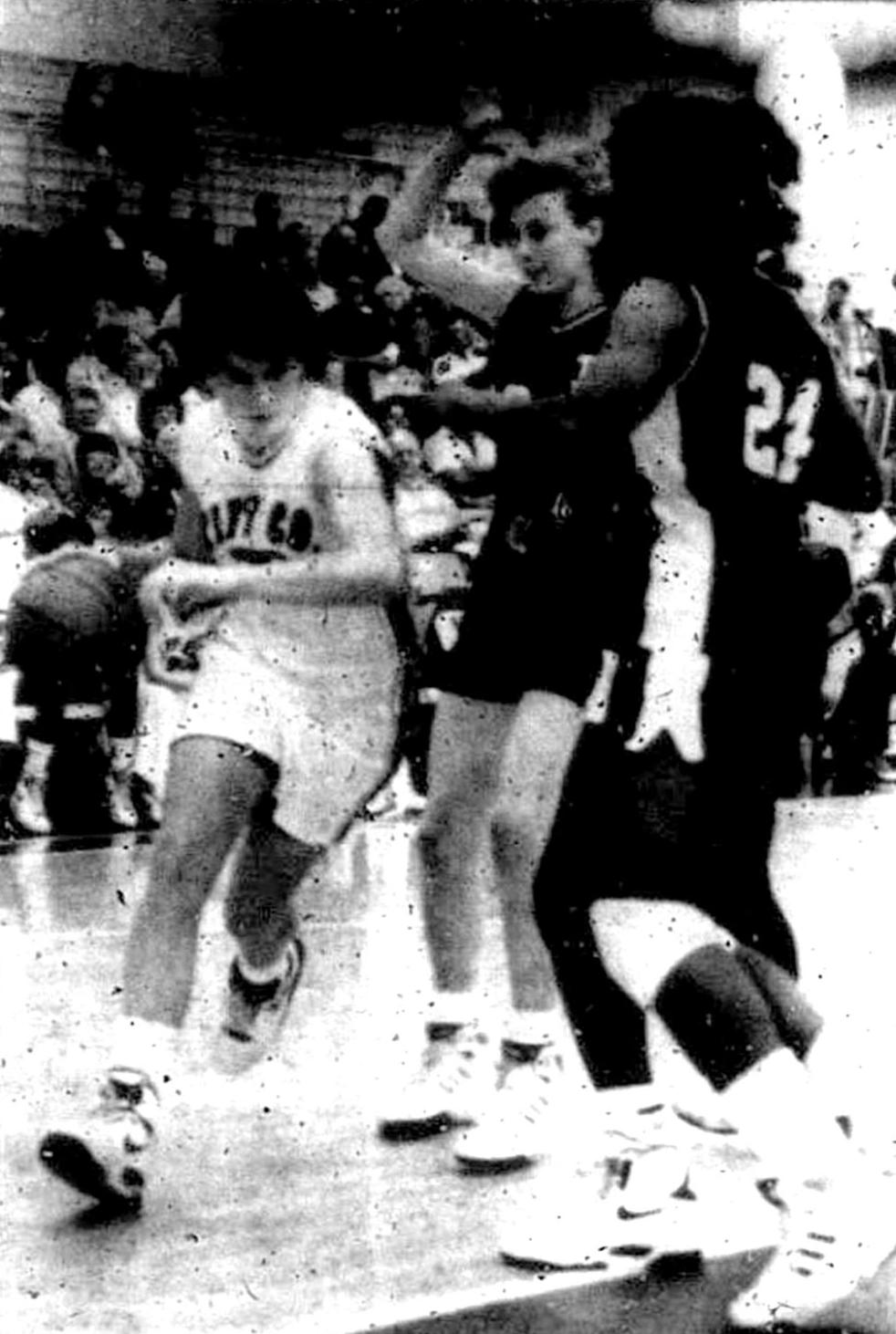 In this file photo from 1990, then senior Ivey Vickers, left, drives the baseline against Coffee in the 1-AAAA title game in Bainbridge. Vickers was held to eight points by the stingy Lady Trojans who repeated as region champions.

Ivey Vickers (left) and Teresa Walker wait for the winning duck to touch the finish line at the inaugural Ducktona 300 in 2018.

Ivey Vickers inducts her father Vic Vickers into the Tift Athletic Hall of Fame in 2016.

In this file photo from 1990, then senior Ivey Vickers, left, drives the baseline against Coffee in the 1-AAAA title game in Bainbridge. Vickers was held to eight points by the stingy Lady Trojans who repeated as region champions.

This is Part I of a series.

She’s played them. She’s coached about half of them to state tournaments. Currently, she head coaches tennis and swimming. Vickers is a football assistant. In the past she’s been a basketball assistant with the Lady Devils and head coached the sport at Irwin County as well as head softball coach at Tift and an assistant at Irwin.

None of this is really a surprise. You might say coaching is in Vickers’ blood.

“Both my parents were coaches,” she said. Her father, Vic, was an outstanding football player at Tifton High and coached softball and football. Mom, Ellen, coached girls basketball at Statesboro High before leading cheerleading and softball at Abraham Baldwin Agricultural College.

“So I spent my time around the ballfields and tennis courts.” When your parents coach, they tend to be around other coaches. They were also close to the Dees and Spurlin families, which also produced many coaches. “I was very blessed to be around different people,” Vickers said. It didn’t hurt, she said, that these friends coached many different sports, something she has always done.

With this early athletic foundation, it’s no surprise that she was around athletic fields from an early age. Vickers attended youth football games and she remembers hanging out at the old ABAC tennis courts with Coach Red Hill and attending basketball games. She on the road, traveling with her father when he coached youth softball with Jimmy Spurlin.

“We were all over the place,” she said.

Growing up around athletics allowed her to see some of Tift’s finest of that generation. Before she entered high school, Vickers watched the national powerhouse Tifton Tomboys softball team with Darby Cottle Veazey play and legendary athlete Ken Hobby played for her dad’s youth football teams.

Vickers said she was very fortunate to have great coaches as she grew up. There was Cottle, Nancy Anderson Mark, Neta Sparks, Margie York and John O’Brien at the high school. Bobby Simpson and E.B. Hamilton coached at Tift County Recreation Department. “Just an awesome period to grow up in,” she said. She’s remained close with high school coaches Roy McWilliams, Tommy Seward and Emmett Bowers.

As a high school softball player, Vickers played on three state champion teams. The only exception

was the state runner-up finish her freshmen year. She won multiple All-Region awards as a catcher and infielder.

Not just Vickers grew up at the end of the 1980s, but Tift County basketball did as well. York was hired away from Worth County for Vickers’ junior year. After York left, O’Brien started his long tenure with the team for the 1989-90 campaign.

Wins did not come often for York, but it was the start of the program’s reshaping. When O’Brien, with Vickers as his high scorer, took the team to state in 1990, it marked two big milestones: it was the Lady Devils’ first state appearance since 1976 and it was also their first winning record in any season since the same year.

“She probably got me in the best shape I’d ever been in,” said Vickers of York, who later won two state titles at Thomasville High. “She taught me a lot of fundamentals. She got me in shape for college basketball. I will probably be forever indebted to her for that.” Vickers said her teammates additionally had a big hand in her being able to play collegiately.

Vickers said that while the Lady Devils won two games, they learned a lot from York in her lone season. Then, “Johnny O came in and we had a lot of fun under him.”

Tift was blessed to have O’Brien, she said. The season started rough, four straight losses (one to a Berrien team that won the state title in the spring), but began picking up at the Savannah Holiday Classic. Tift won three of four games there, but it was not until the Region 1-AAAA-S sub-region tournament that they ever got on a roll.

Vickers scored 19 in and 16 in in upsets over Lowndes and Valdosta. It had been six years since they had won any postseason games. The Lady Devils then shocked Coffee for the sub-region crown. They edged Jordan of Columbus, 47-44, to qualify for state, before running into Baldwin in state’s first round.

Besides her coaches, Vickers received plenty of support from home. O’Brien recently shared old game tapes with Vickers. She said she could hear her parents yelling from the sidelines. Sometimes, they might have been too exuberant. Vickers recalled Shirley Strawter had to intercede on Vic’s behalf to prevent his ejection at Dooly County.

A year later and against Dooly at home, Vickers had a career high 30 points in a 90-46 win.

Vickers went from Tift County High to Valdosta State, where she was coached by the legendary Charles Cooper.

“I had gotten some offers to some other places, but we played Lowndes at Lowndes,” she said. Cooper, who had coached the Vikettes to 122 consecutive wins a decade earlier, was in attendance. “I happened to have a pretty good night (22 points in a 55-45 victory) and he called the next day and gave me an offer.”

Vickers said it was fun playing at Valdosta State, with a good senior year. She does admit to giving Cooper some headaches.

Camps helped shaped Vickers as a coach. In ninth grade, she learned about the Norman Carter Basketball Camp. Whereas Charles Cooper once won 122 consecutive games and four straight state titles at Lowndes, Carter had a streak of 132 and five straight with Taylor County.

Helping out at camp were coaches from all over the state. Among them were Baldwin’s Anderson Bentley, Chuck Miller of Henry County and George Eanes, whose high school stops included Sycamore and more notably at Brooks County.

The camp ran four weeks each summer, all day and all night. Her parents “packed me up for the summer and said ‘You’re gone.’” At camp, Vickers developed a close relationship with the coaches. So close that after she graduated from Tift County High, Vickers was asked to keep returning as an assistant. She went back for years, until Carter retired and the camp ended in 1996.

“It was a like a happy family,” Vickers said. “Those guys were like my fathers and grandfathers.”

Carter’s camp was one of the few in Georgia for women at that time and its reputation was such that Pat Summitt used it as a recruiting pool to bring players to the University of Tennessee.

Vickers keeps in contact with several individuals from the camp. She sends Facebook messages to Miller and when Tift played football at Baldwin in 2014, she met up with Bentley.

Following Valdosta State, Vickers made her first coaching stop as a graduate assistant at Georgia Southwestern, working under Kip Drown.

“He taught me more about being a basketball coach than I thought I would ever learn,” she said. “He’s probably one of the top basketball coaches that I’ve ever worked for.”

Drown had just arrived in Americus when Vickers began working with him. In seven years, the Lady ‘Canes went to five NAIA national tournaments, peaking with a second round appearance in 2000.  He left Southwestern for Grand Canyon. He coached at Colorado State-Pueblo before returning to the area at Georgia Southern, where he stayed from 2015-19.

Though she enjoyed working for Drown, Vickers soon came to a crossroads: “I was either going to be an assistant basketball coach in college or go work in high school.” The salary was better in the high school game. When Irwin County came calling, it was an easy decision, especially with the added benefit that she could come back to Tifton and be close to family.