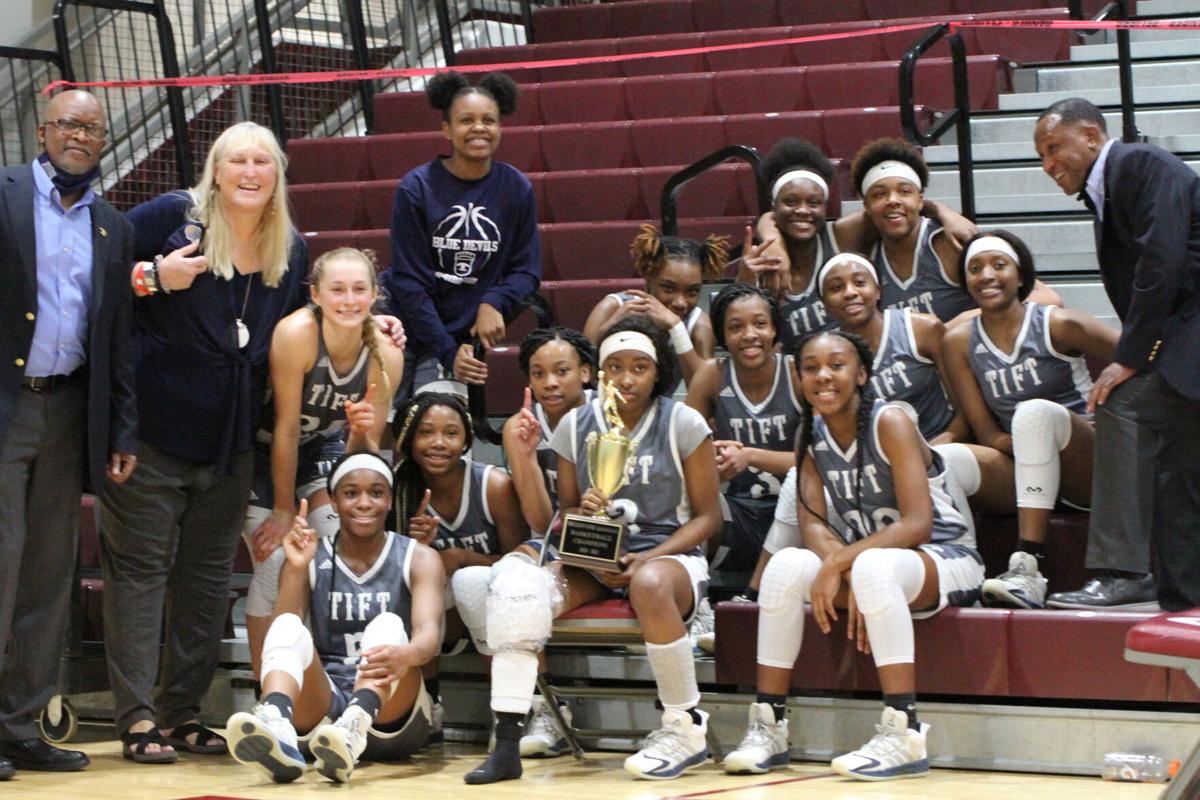 Lady Devils players and coaches with the Region 1-7A championship. Instead of posing on the court, they gathered around injured teammate O'ashia Cushion, who is holding the trophy. Cushion suffered a leg injury in the third quarter. 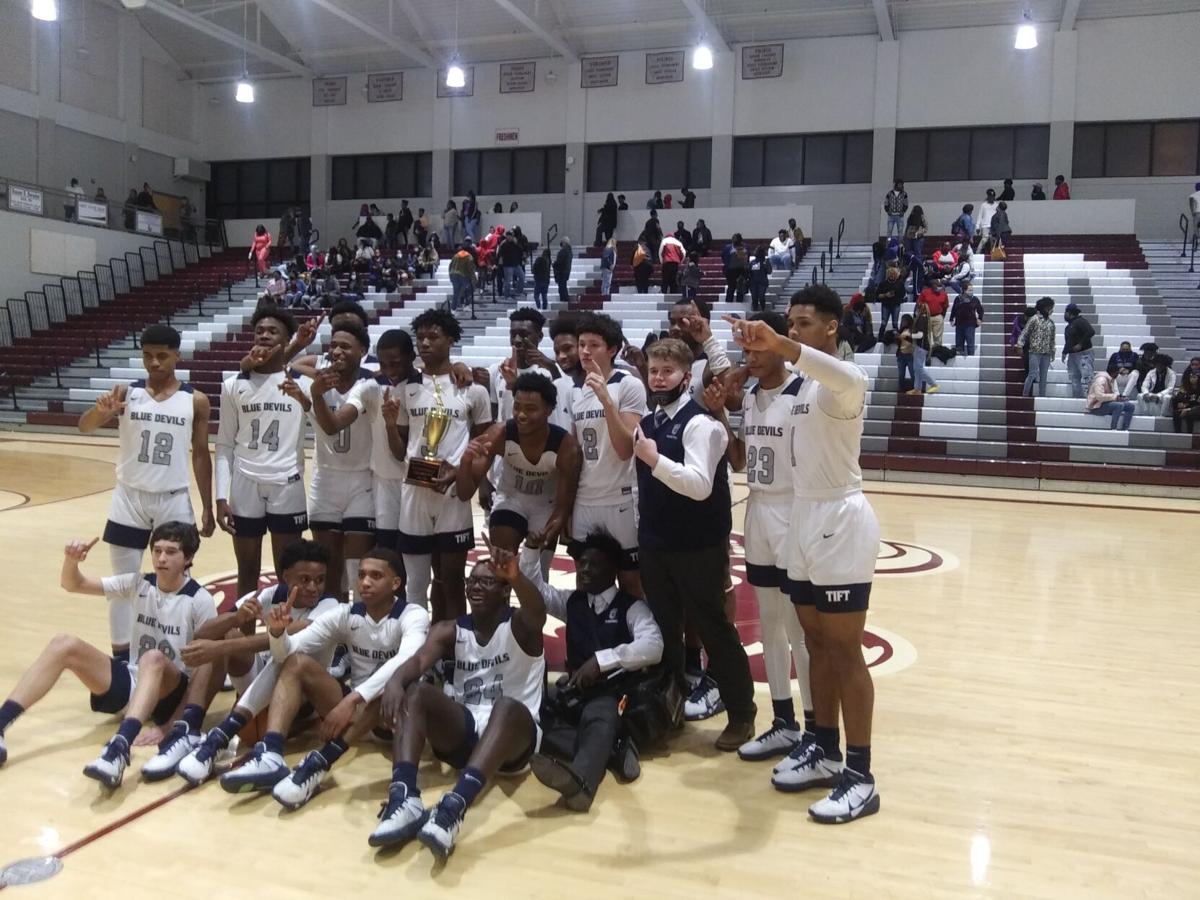 Blue Devils signal they're No. 1, as Torrance Galmer holds the Region 1-7A championship trophy. 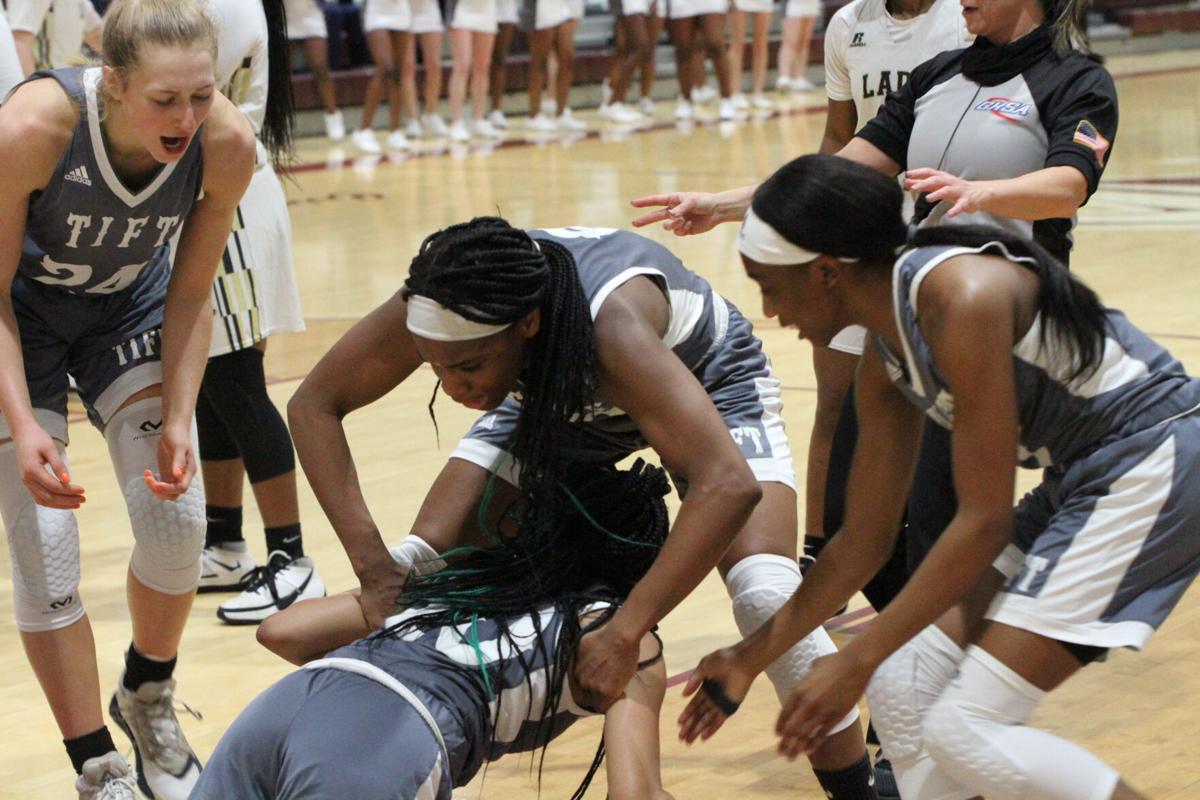 Sky McCrae (10) gets a lift from Shakiria Chaney while Cali Conner and Tamyra Carter offer their congratulations to McCrae, who scored despite being fouled hard enough to make her hit the deck. 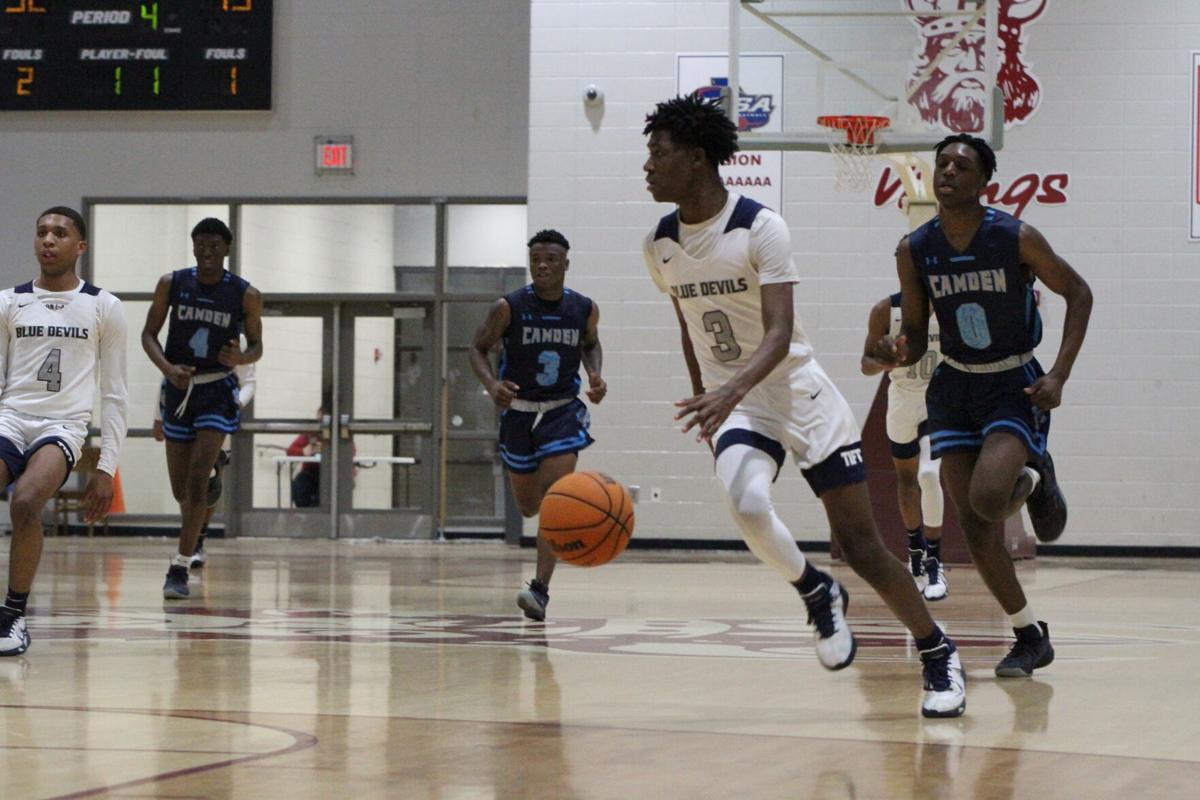 Lady Devils players and coaches with the Region 1-7A championship. Instead of posing on the court, they gathered around injured teammate O'ashia Cushion, who is holding the trophy. Cushion suffered a leg injury in the third quarter.

Blue Devils signal they're No. 1, as Torrance Galmer holds the Region 1-7A championship trophy.

Sky McCrae (10) gets a lift from Shakiria Chaney while Cali Conner and Tamyra Carter offer their congratulations to McCrae, who scored despite being fouled hard enough to make her hit the deck.

"It's good to get it back from Camden, since they got it from us," said Blue Devils head coach Tommy Blackshear. Camden won the boys region crown in 2020, snapping a streak of seven consecutive years Tift was on top.

"They worked so hard," said Lady Devils head coach Julie Conner, whose team won their second straight title. "I am so proud of them."

Tift County has hoisted at least one championship hoops trophy in every season since 2013, but Friday was the first time they swept the titles since 2016. The region titles were the 31st and 32nd in the history of the program.

Over the course of 64 minutes that made up the two region championship contests, a team from Tifton led 56 of them. That was 7:30 of the first quarter and the opening 30 seconds of the second.

That's not to say Tift waltzed at will. The first three quarters of both games were high-stress.

Colquitt's Lady Packers jumped out 3-0 on Carliss Johnson's three-pointer. Cali Conner tied it, 8-8, at 2:27, then Camille Singletary and Johnson scored five straight points. With 51 ticks left, Colquitt was up 13-8.

But as has been their wont all year, the Lady Devils went on a game-changing run.

Conner narrowed the gap on an easy bucket. Colquitt, however, had the ball on their end with four seconds left in the period. All they needed to do was inbound. That didn't happen.

Sky McCrae intercepted the inbounds pass and, quick as a flash, covered nearly 3/4 of the court in those four seconds, beating the buzzer with a basket under the goal. Tift trailed 13-12 at the quarter.

Tamyra Carter gave the Lady Devils their first lead at 7:25 (15-13), a three by the Colquitt bench. Shakiria Chaney and McCrae extended the run to 12-0 with points, McCrae doing so despite being fouled.

The Lady Packers went more than four minutes without scoring, then when Jamaya Moore broke the silence, Janie Ragsdale blocked shots on Colquitt's next two possessions. In between, Ragsdale scored and O'ashia Cushion made a three.

The half ended with a Carter drive to the basket and Tift up, 27-19.

Conner started the third with two more Tift points to bring the lead to double-digits. Johnson cut it to seven (33-26) with a shot behind the arc at 4:53, as close as the Lady Pack came in the second half.

"We've hung our hat all year on our defense and we played it tonight," said Conner. "It was excellent. It wasn't perfect, but we played a heck of a game."

The lead was soon back up to double-digits, even after a heavy blow to the Lady Devils.

Cushion went down with a leg injury at 5:43 in the third and had to be carried off the court. She did not return and while the team gathered around her on the bench during the trophy presentation, fortunately Cushion was walking around later.

With Cushion out and Burgess in foul trouble, it was up to Carter and McCrae to lead the offense. Conner praised both for stepping up.

Johnson was fouled behind the three-point line at 7:25 in the fourth. She made all three foul shots to give Colquitt a fighting chance at 41-32.

Tift was having none of that. The Lady Devils answered with 11 straight points, six by Chaney. The attack was fueled by defense.

Looking for any points they could get, Colquitt drove the lane. The ball was either swatted - usually by Conner, Chaney or Ragsdale - or fell short of its target. Every single time the latter, happened, Tift had the positioning on the glass, which led to an outlet pass to the other end for an easy layup.

The Lady Packers made only one shot from the field in the fourth. By that point, the lead was 19 points and far out of reach.

Chaney and Johnson tied for the scoring lead at 22 each, but Johnson's was not nearly enough. Chaney scored 16 in the second half.

Carter scored 9 for the Lady Devils and Conner added 8. Singletary contributed 10 points for Colquitt, but the rest of the team combined for only four points. Johnson and Singletary were the only two Lady Packers to score in the second half.

Blackshear reported he was feeling "pretty good" after the victory. A Tift County legend, he was sitting at home a year ago, hoping that someday he might get a chance to coach his Blue Devils again.

He was not expecting a blowout against the Wildcats after regular season games were decided by one and two points.

"To do it like that, to put an exclamation point on it," he said of the 14-point victory.

It took nearly half of the first quarter for Tift to score, a three by Torrance Galmer. The Devils' slow start was great for Camden County's defense. The problem, however, was with their offense.

Tift took an 8-0 lead before the Wildcats received a three-pointer by Eric Gaines. More problematic was that was their only points of the first period.

Thanks to hard work by Tift on the ground and on the boards, Camden's offense disappeared for chunks of the game. After Gaines came through, it was another five minutes before they scored again.

"We turned in a pretty good game," Blackshear said, "especially defensively. Especially for three quarters. That was the difference in the ballgame."

Up 11-3 at the quarter, Jatarion Warren powered up on an offensive rebound for a dunk a 13-3 advantage. The 'Cats scored six straight points, but then Tift had 10 of the last 12 scored in the half. Three of these were by Galmer, who nailed a three at the top of the key to make their lead 25-13 at the break.

Camden's best quarter was the third. They outscored the Devils, 19-15, and made their only serious noise of the night.

The trouble started because, oddly enough, the Blue Devils were too strong.

Warren thundered a dunk at 6:10 to make it 29-16. Amarion Jackson scored on the other end. As Tift returned the ball up the court, the referees noticed a problem: Warren dunked it so hard that the goal was now out of position.

Play was stopped at 5:28 in the third to address the problem, which required Lowndes officials (with an assist from Tift athletic director Rusty Smith) to bring the goal completely down to the ground. Once down, it could be safely moved back to where it originally was and brought back up.

Once the contest resumed, it was the Wildcats who took control.

Howard Attaway, Gaines and Aiden Olmstead increased Camden's run to 12 consecutive points and Tift's advantage was now narrowed to 29-28 with just over three minutes left in the third.

Tift, which entered as the region's No. 1 seed, then opted not to let Camden take their win away.

Jyamier Beckhom got a pass from Galmer and made a three by the Tift cheerleaders at 2:50. Olmstead picked up his fourth foul, then Beckhom hit another three, this one off an assist by Chrishon Stephens.

"We got a little nervous there, started throwing the ball away," said Blackshear. "But Beckhom hit back-to-back threes." Galmer, too, he said "got us back going again."

The Wildcats missed two free throws, then Attaway made two at 1:09. Six seconds later, Galmer was at the other end of the floor, drawing a defender and dumping a pass to McKyler Horne, who was fouled as he made a basket under the goal and added the free throw on top.

Warren's dunk at the end of the third looked to be the icing on the Devils' run, but at 40-32, they were just getting started.

A finger roll from Warren resulted in another three-pointer play when he was fouled at the beginning of the fourth.

Up 43-32 and with the ball after a Camden miss, Tift started a game of keep away that not only bled time off the clock, it broke the Wildcats' rhythm.

Galmer fed Tyler Parker for a dunk. Warren scored on an inbounds play.

Camden's offense was shut down the first 5:52 of the fourth quarter, even after they were awarded two free throws on a Devils' technical foul.

Hezekiah Jones posted up to make it 52-32 with three minutes left, putting the lead at its apex.

The Wildcats finished out the game on a 10-2 run, most of which saw them playing against Tift's bench.

Both Tift teams split with their opponents during the regular season and all four games were exceptionally close. No one won a boys game by more than two points; the biggest margin in either previous girls game was five points.