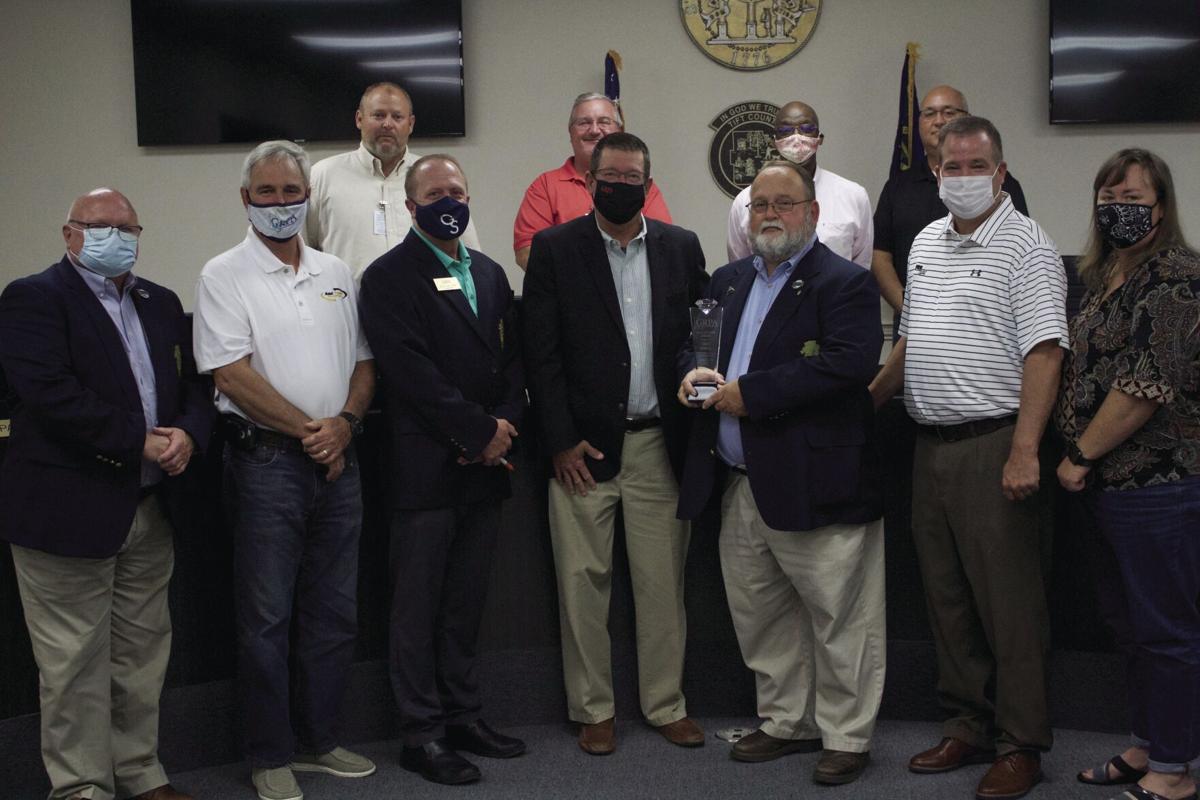 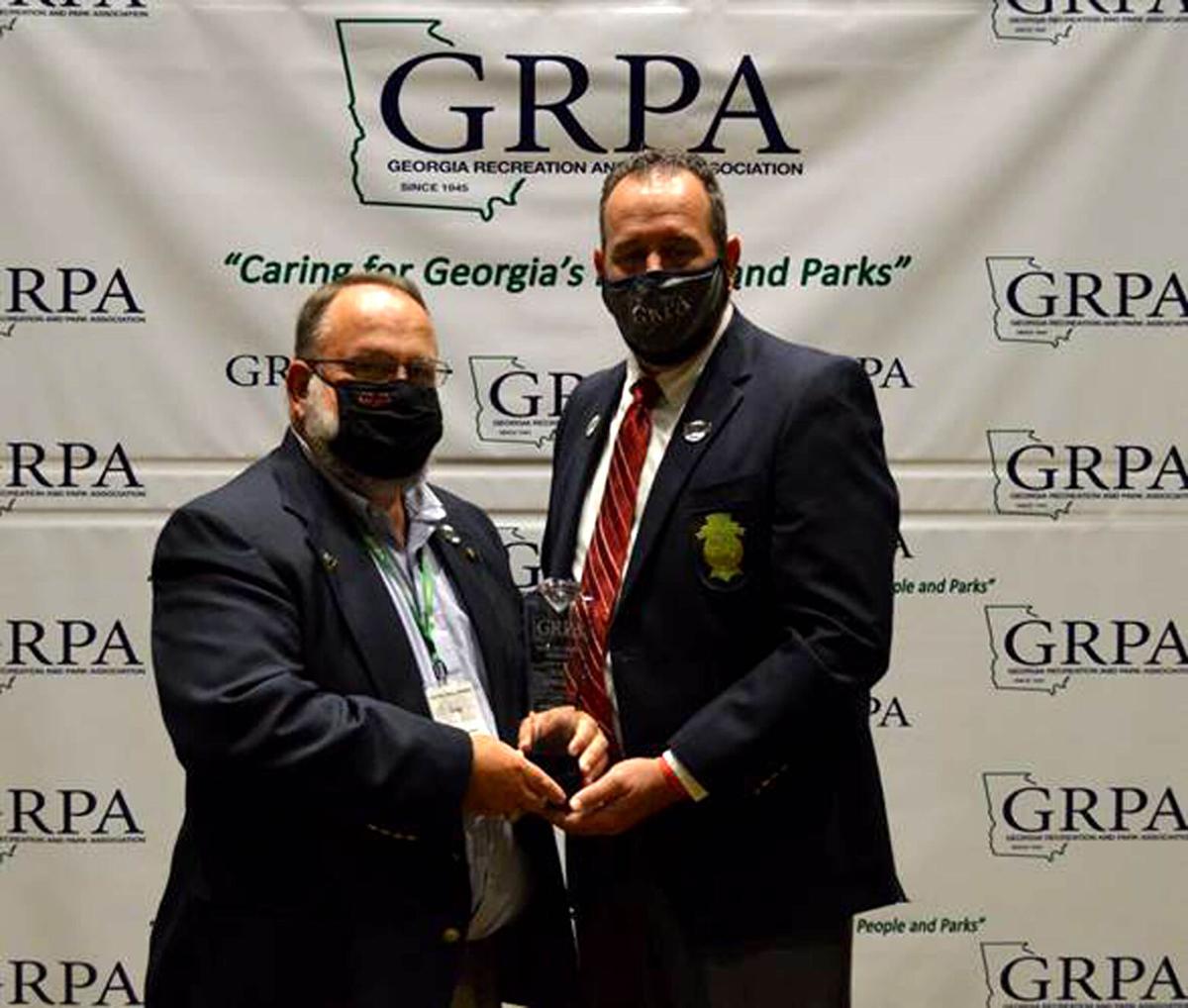 Craig Sowell receives his award from Craig Potter, current Georgia Recreation and Park Association President. Sowell was inducted into the GRPA’s Hall of Fame recently because of his lengthy contributions to youth athletics.

Craig Sowell receives his award from Craig Potter, current Georgia Recreation and Park Association President. Sowell was inducted into the GRPA’s Hall of Fame recently because of his lengthy contributions to youth athletics.

TIFTON — Nearly 40 years after he began working with the Tift County Recreation Department, Craig Sowell has achieved one of recreation’s ultimate awards. He was recently inducted into the Georgia Recreation and Park Association Hall of Fame.

GRPA Hall of Fame inductions are select. Usually only one or two names are inducted each year. Joining Sowell was Roswell’s Jeff Pruitt. Pruitt’s induction is posthumous.

“It’s quite an honor and humbling to be among that group,” Sowell said. Many of the members shaped his own career, such as Albany’s Brockey Brock, Wayne Gay and Melvin Cooper. He said he worked extensively with nearly every name on the list, dating back to the 1980s.

Sowell said he is the first inductee from Tift County, an amazing feat considering the county’s recreation history. Tifton hosts multiple state events each year. Sowell’s been a part of the Tift County Recreation Department since 1984 and took over as director in 1993.

Unfortunately, there isn’t a display as grand as the Baseball Hall of Fame in Cooperstown. “I think everything’s kind of up in an area in their office,” he said. The GRPA is headquartered in Conyers. His skill had already been recognized by the organization. Sowell served as GRPA President from 1999-00 and received the GRPA’s Professional Award in 2007.

The latest honor was a bit of a surprise.

Sowell only learned for sure that he was joining the Hall of Fame when he was presented with the award on Oct. 7. He was told that his attendance at the meeting was mandatory. “I kind of had an inkling that something was up, but I wasn’t sure,” he said.

Jeff Fussell, Recreation Manager for the Sumter County Parks and Recreation Department, inducted Sowell, who was presented with a cut glass award. “I was very blessed,” said Sowell.

Fussell said in his speech that he had known Sowell since 1992, from amateur softball.

“In those days, he was known as a man of integrity, high morals and exceptional character,” said Fussell. “Nothing about that has changed in 2020. While there are others who are worthy of the Hall of Fame, none more than this individual.”

Fussell spoke of Sowell’s range in athletics, his role on several different committees, and, his past as a square dance caller. Laughing, Sowell said, “I don’t know if I could do that anymore,” about his square dancing past. “I had a good time.”

In addition to his accomplishments, Fussell spoke about what Sowell has done for the organization. “He has spearheaded many task forces to help solve problems and find different ways to help our association grow,” he said.

“It was said when he received the distinguished professional award, that it is the highest recognition that our association can bestow on an individual,” said Fussell. “But I have to disagree. When you go into an organization’s Hall of Fame, you have reached the pinnacle.”

In his induction speech, Sowell said it was “very humbling” to be included and that it came “With support of God, my family, county staff and employees, citizenry, along with other recreation professionals that care enough to nurture me along the way together.”

Tifton’s Bobby Simpson and E.B. Hamilton helped him along, as well as others around the state.

“We have a great community and I am proud to serve as the Recreation Director,” said Sowell. “Together we can all still strive to make a difference each and every day.”