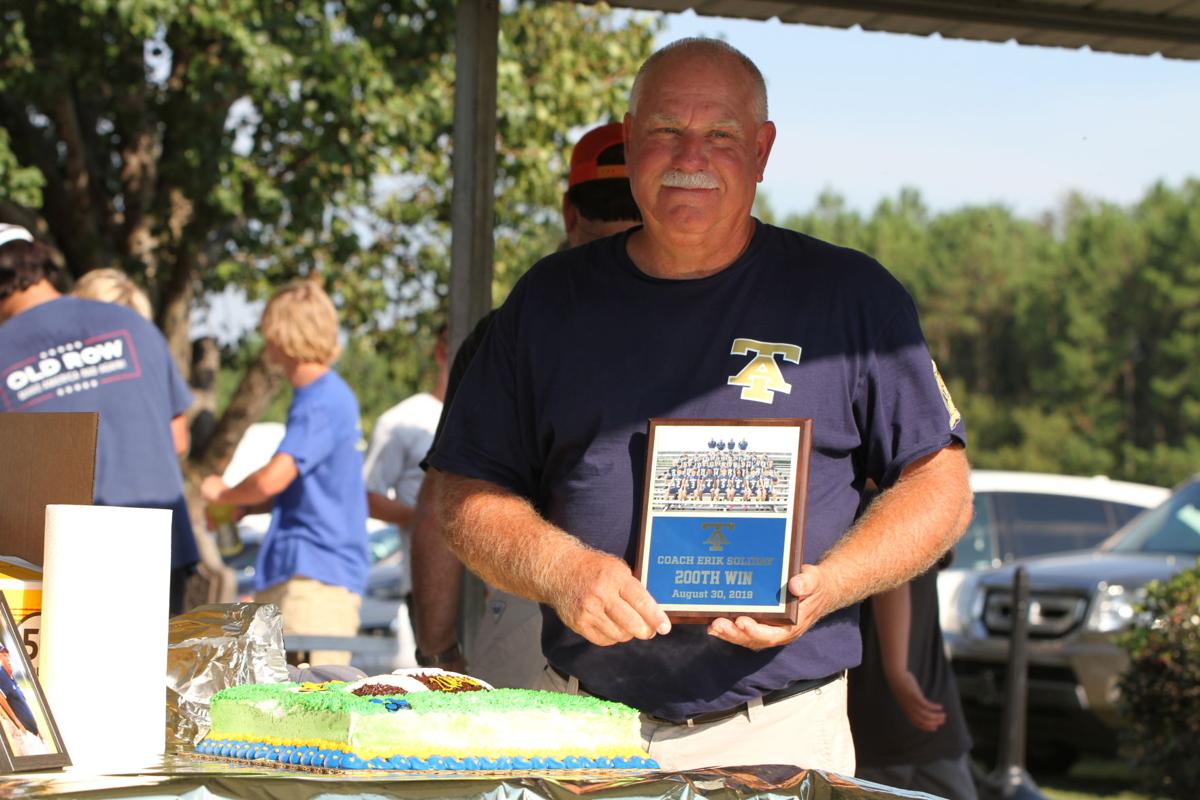 Erik Soliday poses with special cake and the plaque commissioned for his 200th career victory as a high school football coach Thursday at Tiftarea Academy. The Panthers helped to that mark with a win Aug. 30. 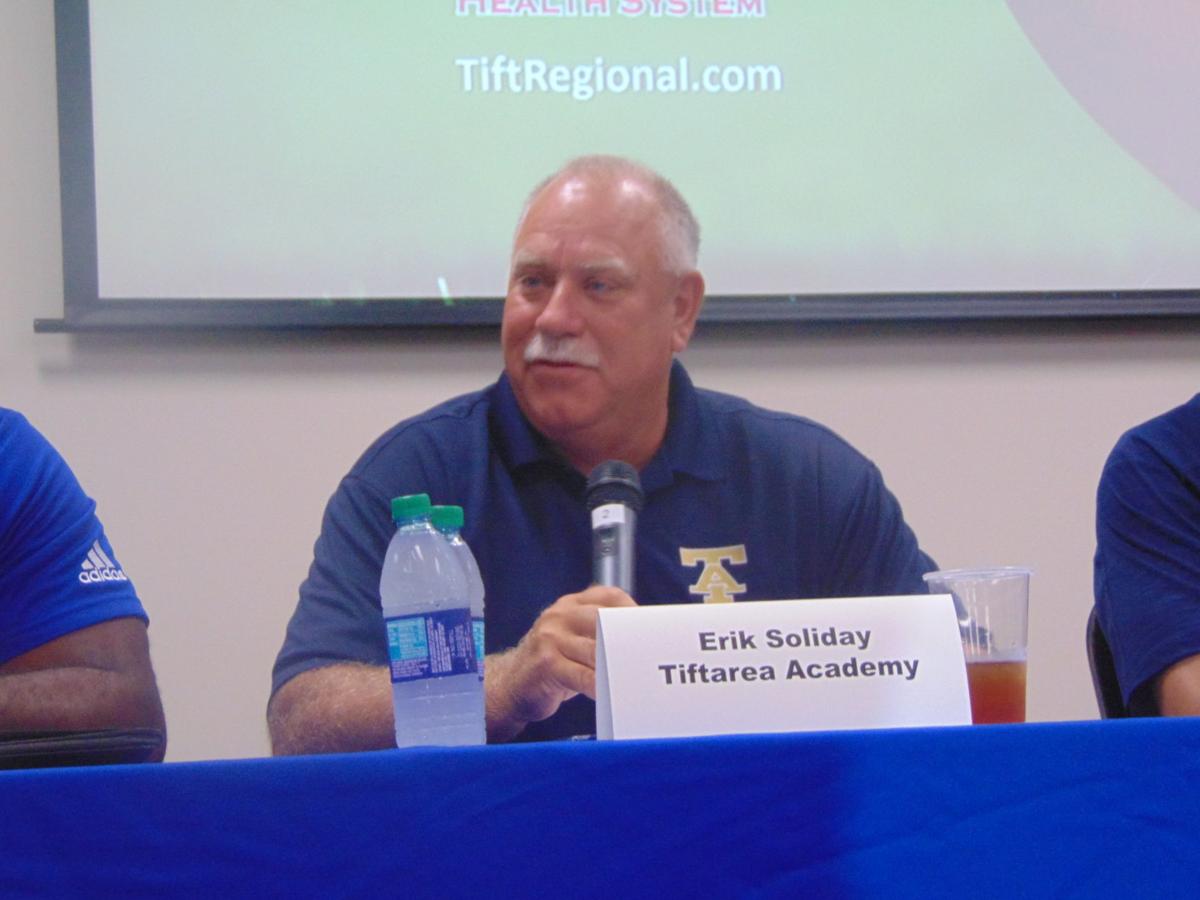 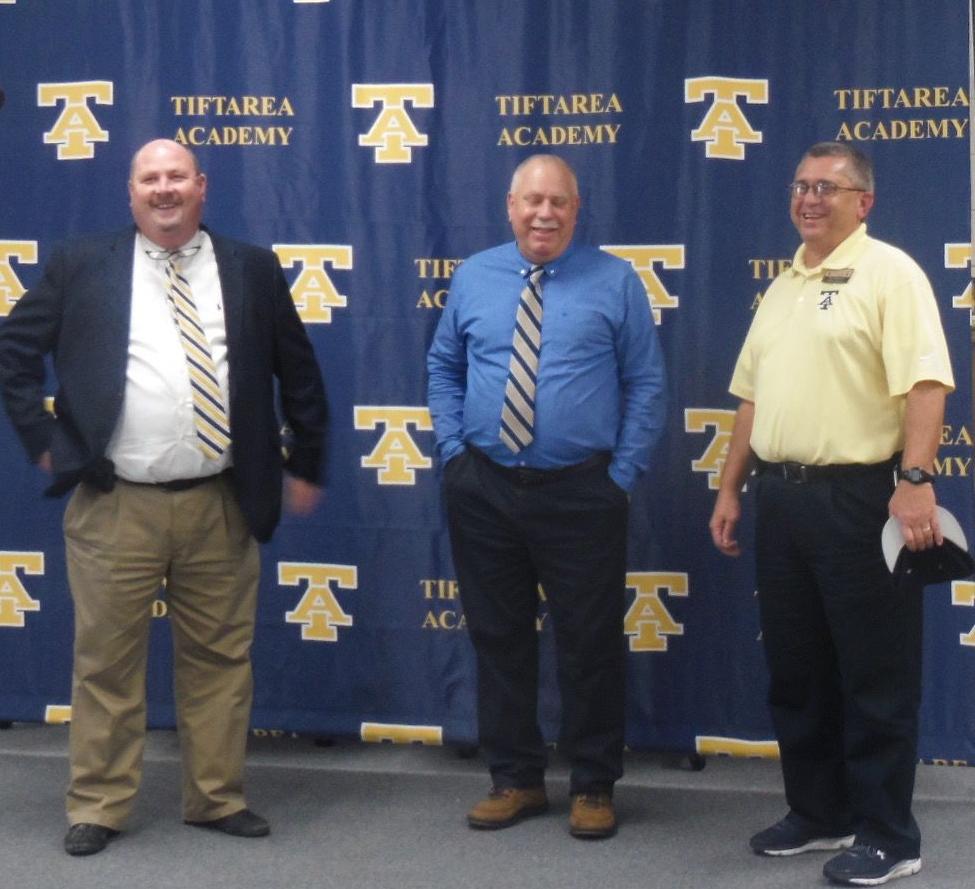 Erik Soliday poses with special cake and the plaque commissioned for his 200th career victory as a high school football coach Thursday at Tiftarea Academy. The Panthers helped to that mark with a win Aug. 30.

CHULA — It’s official. Tiftarea Academy has one of the most successful football coaches in Georgia high school history.

So, while Soliday and players toiled in the hot September sun Thursday, family, friends and colleagues clandestinely organized a party by the football field. Using the cover of cars parked for a middle school game, photos and balloons were put on display and a cake was delivered. Somehow, this group also managed to hide the aroma of porkchops on the grill.

When players — and finally, head coach — emerged from the locker room following practice, he was surprised with the spread and a plaque for his achievement.

In the rich history of Georgia high school football, the Georgia High School Football Historians Association can confirm that only 59 head coaches have achieved 200 wins. Only nine are currently working as head coaches. Since arriving at Tiftarea last year, Soliday has gone 13-1.

Ever humble, Soliday played down his role in the victories.

“I’ve never played in one of those 200 games,” he said. “The kids get all the credit for those wins. I’ve been along for the ride for most of them.”

Soliday said he did not really remember his first victory, which came 17-14 over Irwin County on Sept. 22, 1989. The win came from the toe of Chuck Hobby, who broke a 14-14 tie with a 28-yard field goal as time expired. Antonio Burgess and Cedric Carrithers scored the Rebels’ touchdowns.

A tie from that season sticks out more in his mind. A week before the Irwin game, the Rebels tied No. 2-ranked Wilcox County, 6-6. That, he said, got the season going.

Soliday’s earned two Georgia High School School Association state championships were at Americus — since combined with Sumter County — in 2000 and 2001. Leonard Pope, a tight end on those teams, went on to play professionally in the National Football League for seven seasons.

“I remember the championship games, of course,” said Soliday, “and a lot of the region championships.” The 2000 version of the Americus Panthers went 15-0, beating Washington-Wilkes in the finals, 14-0. A loss to Crisp County during the regular season was the only thing keeping them from two straight undefeated seasons. Americus defeated region rival Early County in the finals, 33-21.

Soliday said the most rewarding aspect of his coaching career has been, “Seeing all these kids come back. You get a chance to see them later as parents and adults, working.” He added, “Hopefully, you had a positive influence to get them where they’re at today. To me, that’s the most rewarding.”

Tiftarea should celebrate another milestone this season: the program has 249 wins. This week should have been an opportunity to get their 250th at Frederica Academy, but Hurricane Dorian intervened. With the hurricane projected to strike east Georgia, Governor Brian Kemp ordered evacuation of coastal counties. Frederica is located in Glynn County and cancelled school for the week. Tiftarea will have its shot at 250 next Friday at Westfield.

After semifinals appearance, Panthers look back, look ahead

KINGSLAND - Robert William Doedyns, 79, of Kingsland passed away Sunday, August 2, 2020, at his residence. Among his survivors is his wife, Joyce Blalock Doedyns of Kingsland. Arrangements are incomplete and will be announced by Bowen-Donaldson Home for Funerals.

ENIGMA - Steve "Sonny" Stinson, Jr., 81, of Enigma passed away Tuesday, August 4, 2020, at his daughter's residence in Ocilla. Arrangements are incomplete and will be announced later by Bowen-Donaldson Home for Funerals.