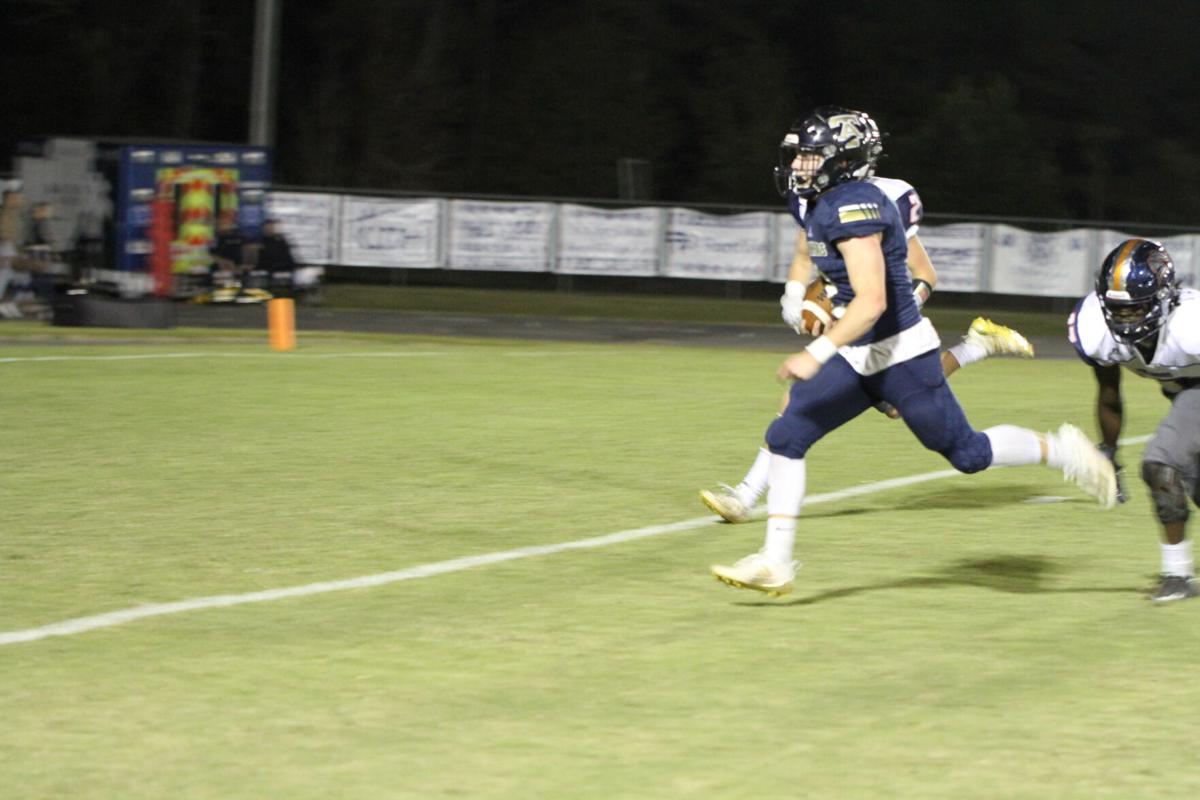 Dylan Harbort races for the end zone Friday, the first of six for him on the night. 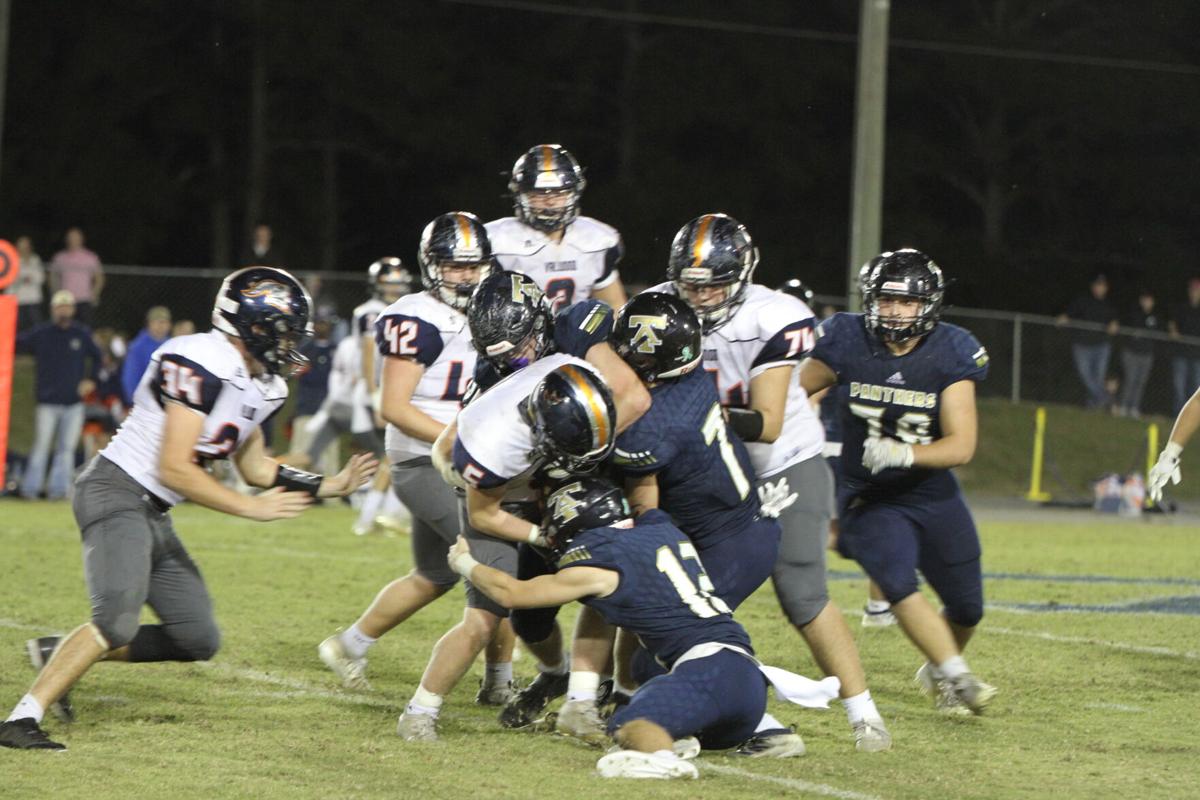 Ty Haskins and Matthew Malone had Valwood's Samuel Clements marked for a tackle, catching up with him behind the line of scrimmage in the second quarter.

Dylan Harbort races for the end zone Friday, the first of six for him on the night.

Ty Haskins and Matthew Malone had Valwood's Samuel Clements marked for a tackle, catching up with him behind the line of scrimmage in the second quarter.

CHULA - Erik Soliday likes this winning thing. His Tiftarea Academy Panthers had the band back together Friday night and assured themselves of a spot in the GISA Class AAA state playoffs following a 49-28 victory over Valwood.

"It feels a whole lot better, I can promise you that," said Soliday of everyone's mood. The Panthers came ready to play, he said. "They knew what was on the line."

It was a big win for the Panthers, who had skidded in recent weeks because of multiple injuries. Soliday was happy to see everyone contribute again. He must have been especially proud of one the returnees in particular: Dylan Harbort.

Soliday said he didn't keep up with how many touchdowns his quarterback scored against the Valiants.

"We just play," he said, as celebratory fireworks lit up a back corner of the campus.

That would be six for Harbort, two each in the first, second and fourth quarters.

Harbort did his scoring so quietly that his rushing yardage might be a surprise. He ended up with 34 carries for an unofficial 331 yards.

Harbort's big quarter was the third, which saw him soak up 171 yards and convert runs of 67 and 38 yards for touchdowns.

While Harbort was pushing through Valwood defenders, his defensive line kept pushing the visitors backwards. Despite rushing for two touchdowns, the Valiants finished with (-4) yards on the ground.

The game was close for a half. Valwood even briefly led. Very briefly.

Tiftarea jumped out to a 12-0 lead, but could not convert points after. Brock Blais put Valwood on the scoreboard late in the first. Pate Hogan added a touchdown run in the second and when Blais converted a 45-yard field goal at 3:28, they were ahead 13-12.

Everything changed when Blais put foot to football again.

The kickoff was a line drive, caught by Cason Peavy at his own 24. Peavy burst ahead, veered slightly to his right and no Valwood jerseys touched him as his completed a 76-yard return at 3:17.

Tiftarea initially converted a two-point conversion, a pass from Harbort to lineman Ben Matt, but offsetting penalties forced a replay. The pass failed, leaving the score 18-13.

Valwood would not get a chance to immediately retaliate.

Jayk Sailer's squib kick was fielded but fumbled when the returner was wrapped up. The Panthers recovered at Valwood's 39 and immediately set forth on a new drive.

Harbort's pass to Matthew Malone gained a first down at the 20, then Harbort ran for 10 more yards. Tiftarea bogged at the 7, however, and Sailer converted a 24-yard field goal with 27 seconds left in the half.

Two drives in the third quarter put the game away for Tiftarea.

After receiving the second half kickoff, Harbort began essentially a one-man crusade to lead the Panthers to paydirt. He ran the ball seven times on the eight-play drive, the last for an eight-yard touchdown at 7:52.

Sailer kicked the extra point - he was good on all four second half attempts - and it was now a 28-13 lead.

Hogan passed for a pair of first downs on Valwood's next possession, but he was also sacked twice by Matt, Ty Haskins and Mason Tyler. The latter sack resulted in a fumble and Tyler jumped on it at the Tiftarea 33.

On the next snap, Harbort ran up the middle for a 67-yard touchdown at 5:22, increasing the lead to 22 points.

Valwood came back. Demetris Rosier took the kickoff 50 yards to the 17. Hogan completed two passes, with a three-yard completion to Harrison Hamsley for a score at 4:18.

The Valiants couldn't gain any momentum, though, as they could not keep the ball out of Harbort's hands.

Tiftarea used up the last four minutes of the third quarter, driving down to the 5. On the first play of the fourth, Harbort went off right tackle for the Panthers to go up 49-20.

Harbort tacked on a last touchdown with a 20-yard sprint at 6:31.

Hogan led the Valiants down the field for one last touchdown, with Bay Moorman doing the honors on a four-yard plunge at 3:26. He also ran for a two-point conversion.

The Panthers converted two more first downs before running out the clock. Though Harbort ran 34 times, he appeared to still have plenty in the tank; his last run was for 21 yards to Valwood's 22.

Harbort's day started with a 24-yard touchdown run at 8:48 in the opening frame. Sailer's squib kickoffs then bit Valwood for the first time and Malone gathered up the pigskin at the 26.

Harbort ran four times and reached out of a tackle to get the ball over the goal line at 6:56.

Hogan followed with four completions for Valwood, who had first-and-goal at Tiftarea's 2. There, the defensive front stiffened. Moorman couldn't gain. Matt stuffed Hogan for a seven-yard loss, which was followed by Brock Hammmond and Wesley Malone combining for a nine-yard sack.

Blais came in for a 35-yard field goal with 38 ticks left on the clock.

Hogan-to-Hamsley picked up 47 yards in the second, leading to Hogan punching it in from the 2.

Parker Highsmith ended Tiftarea's next drive with an interception and Blais put Valwood ahead on his 45-yard kick.

Harbort completed 2 of 6 passes to go along with his rushing yards. Kameron Brown, another returner from injury, added 30 on the ground on five attempts.

"It makes a huge difference when you get a lot of your players back," said Soliday. "Confidence-wise, it makes a big difference."

Both sides of the line earned praise from their head coach.

"We really stepped it up on the offensive line," he said. Only once on 41 carries were the Panthers tackled in the backfield. "I thought defensively we played pretty well. We gave up a couple of plays here and there, but it's just one of those things with a good team (like Valwood)."

Hogan completed 23 of 30 attempts for Valwood for 296 yards and a touchdown.

Hamsley grabbed a touchdown on one of his 11 receptions for 133 yards. Moorman had a score on 21 rushing yards.

The win gives Tiftarea a 5-4 record to end the regular season. They will next play in the state tournament.

Valwood will have to wait and see for its fate. The Valiants were ninth in the power rankings coming in to Friday's game. The top eight teams advance to state.