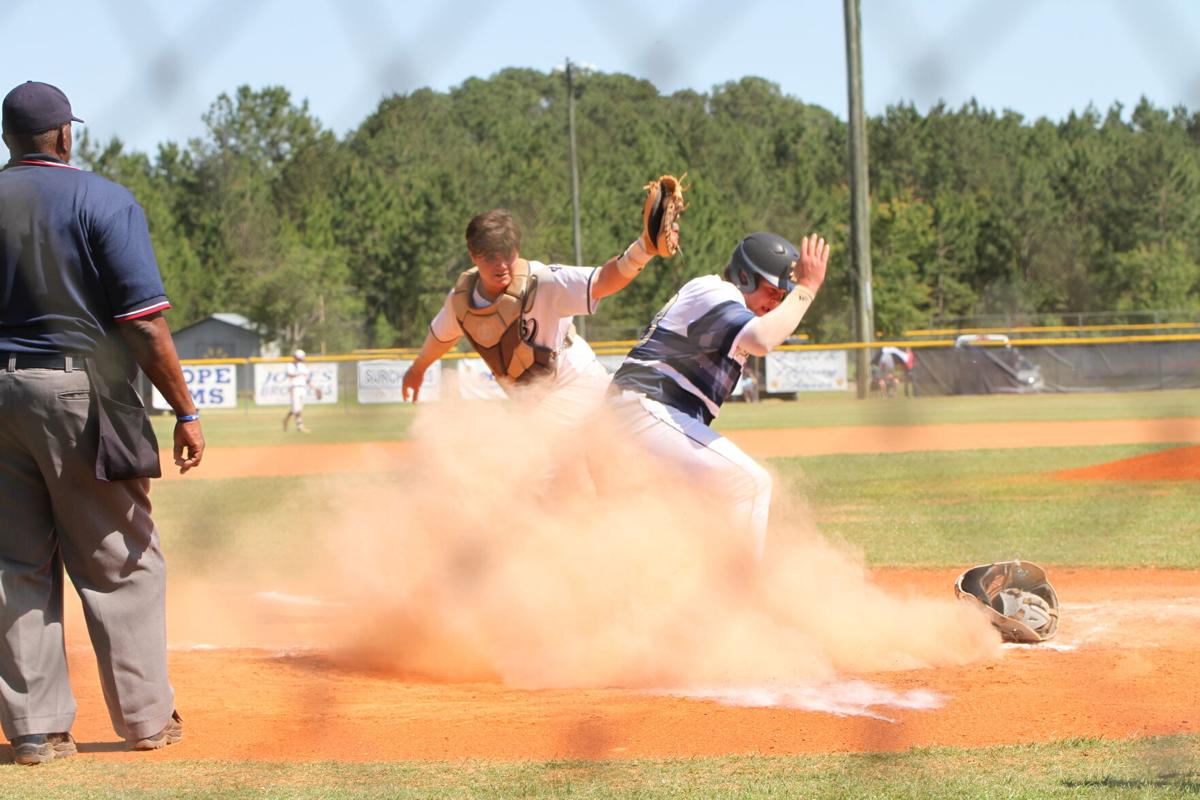 Ben Matt emerges from a cloud of dust to score the Panthers fourth run of the first inning of game three on Matthew Malone's base hit. Tiftarea went on to win, 14-4. 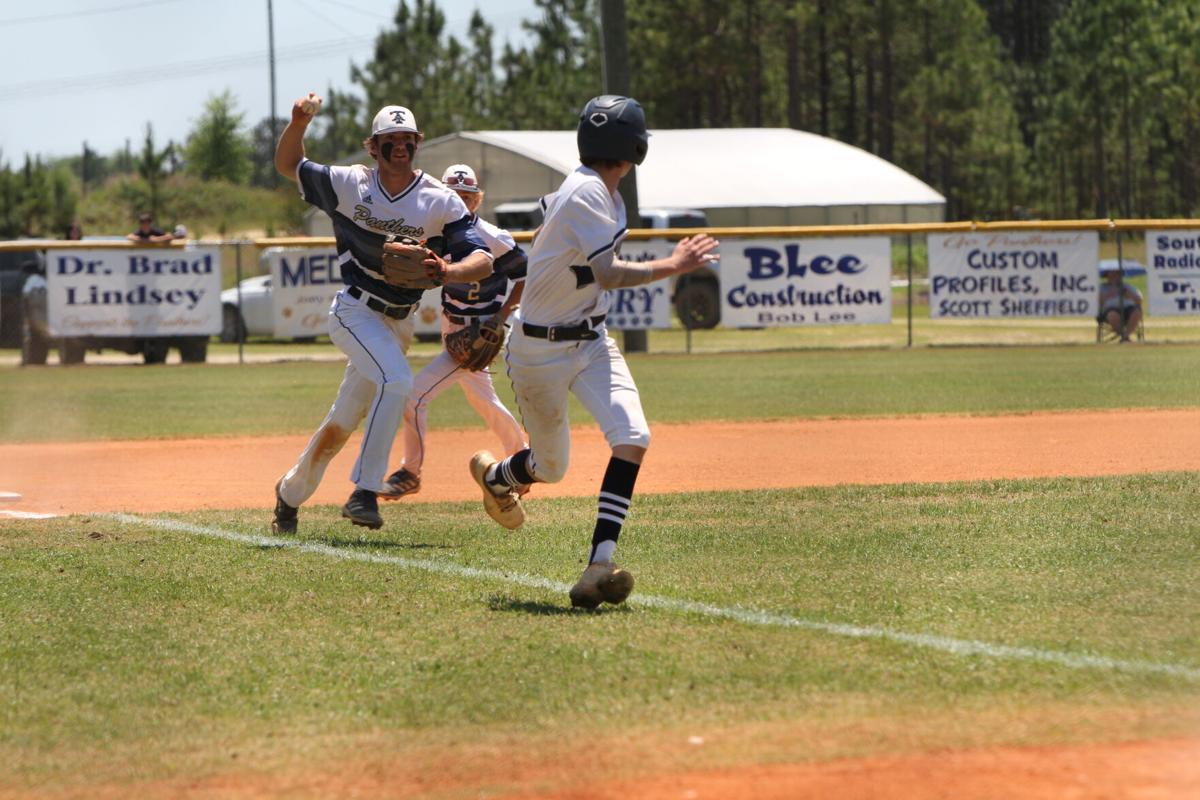 Hayden Murphy throws to catcher Brock Hammond during a rundown during the first game Saturday. Hammond ultimately tagged his man out. 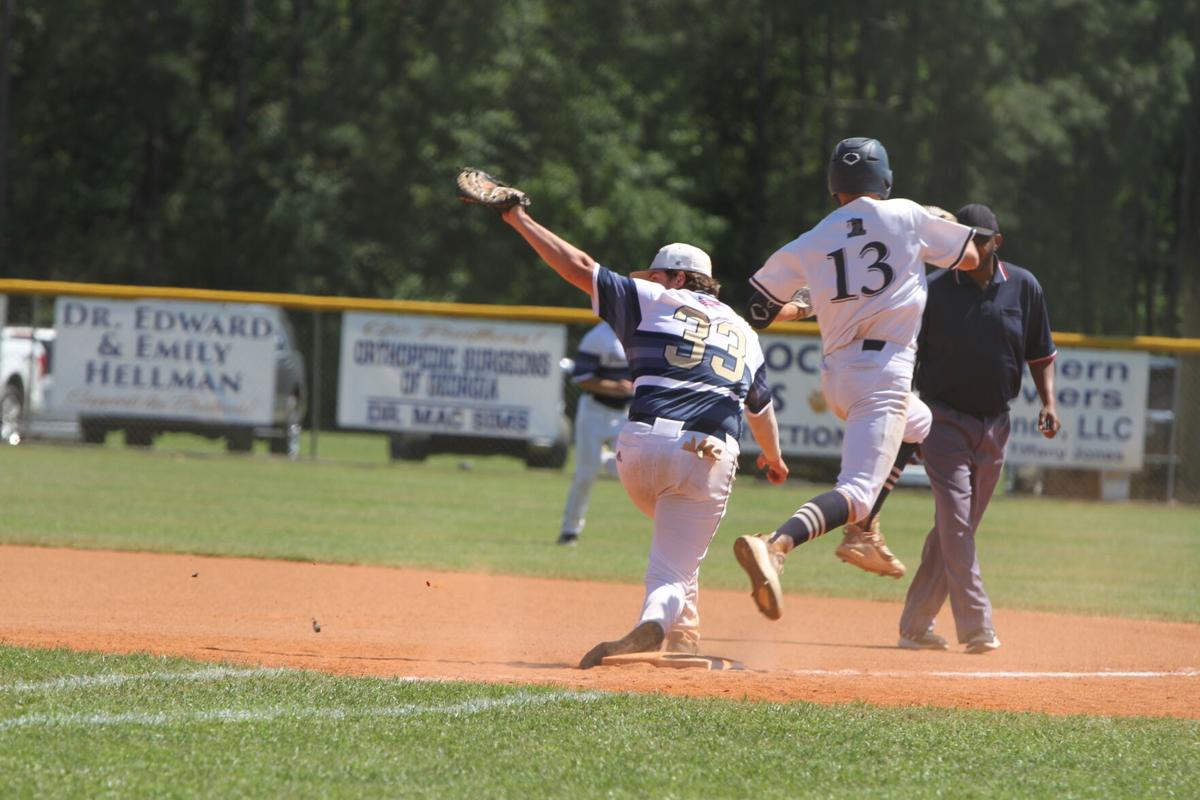 A big stretch by Ben Matt at first base to complete a first inning double play. The play, started by Hayden Murphy at third, was a big boost for Logan Moore for the start of his four scoreless innings in the final game.

Ben Matt emerges from a cloud of dust to score the Panthers fourth run of the first inning of game three on Matthew Malone's base hit. Tiftarea went on to win, 14-4.

Hayden Murphy throws to catcher Brock Hammond during a rundown during the first game Saturday. Hammond ultimately tagged his man out.

A big stretch by Ben Matt at first base to complete a first inning double play. The play, started by Hayden Murphy at third, was a big boost for Logan Moore for the start of his four scoreless innings in the final game.

CHULA - The Tiftarea Academy Panthers are back in the GISA Class AAA baseball final four in a rather unconventional doubleheader Saturday afternoon.

Tiftarea stayed alive with a 13-12 victory over the invading Knights, then used the powerful pitching of Logan Moore to jump out 13-0 over the first four innings of the deciding contest. Bethlehem kept alive with a four-run fifth, but the Panthers walked off the run-rule win on a balk.

"After all the offense we saw in both those (earlier) games," said Tiftarea head coach Chance Benson, a balk was not his predicted ending. His club moves on to host region rival Brookwood in the final four.

"That's going to be fun," he said. "Our region opponents in the final four is going to be a lot of fun and to host it in Chula since the first time I've been here."

"We're looking to break through the door."

Moore pitched in both games, mopping up the first and having just enough pitches left in him to be able to continue for the first four of the second.

It was not just a good day for Moore; Bethlehem is probably quite happy to not see Hayden Murphy again. The junior was 10-of-11 in the series, with hits in his first official 10 at-bats, two of them homers.

"It's unreal," said Benson of the streak. "He's a good ballplayer."

The only time Murphy did not stand at first after an at-bat was a sacrifice fly in the third game (which does not count against his average). The only at-bat that hurt Murphy's numbers, he reached anyway on an error. Bethlehem pitched around him once and Murphy was so hot, he got a double off an infield hit, one that coincidentally struck pitcher Bryce Peppers on the hand and rolled into the outfield.

The first two men got hits off Moore in Saturday's second game, but Murphy turned a double play at third base. Momentum abated, he polished off the Knights with a strikeout.

While that cooled off Barrow County-based Bethlehem, the Panthers found their fire never extinguished from the wild opener.

Murphy sent the second pitch he saw deep over the centerfield fence. Jayk Sailer singled and stole second. Brock Hammond singled him in, then Moore doubled to right, bringing in Kameron Brown (running for Hammond). Matt made it five straight hits on another two-bagger, then finally Matthew Malone cleaned him up on a single.

"The way this game started was unreal ... it was impressive. The kids came out ready to play. They were swinging," Benson said.

Up 4-0, Moore had plenty of cushion. Soon, it doubled.

In the bottom of the second, Murphy and Sailer started with hits. Murphy scored on a wild pitch, Sailer on a single by Hammond. Another wild pitch and a sac fly by Matt meant it was 8-0 through two.

John Austin Lee, Jam Presley and Sailer crossed in the third, Murphy, Hammond and an error plating them.

Over the 10-run threshold for the run rule, they received more help with two in the fourth, Malone and Presley. Hammond picked up his fourth RBI in as many innings.

Four scored in the fifth for the Knights. More were avoided on a nifty double play started by Presley, who flipped to Malone, then over to Matt to quell a bases loaded, one-out situation.

The game ended in the strange fashion in the bottom half, which was put in motion on a double by Levi Stanfill. Brown, pinch-running, was on third with two outs on Lee's grounder. Before Presley had a chance to walk it off with a hit, a balk was called, ending it without a play.

Hammond and Sailer were both 3-for-3 in the clincher. Murphy drove in two on two hits.

Former Major League pitcher Earl Wilson once described baseball as "A nervous breakdown divided into nine innings." High schools get seven frames, but the sentiment was the same in the opener.

Bethlehem got things going with a 1-0 lead in the first, Cody Craft driving in Ethan Guthas.

Tiftarea jumped ahead 3-1 in the second, which held to the bottom of the fourth. From there, the lead changed every half inning, until the Panthers went ahead 13-11 in the top of the seventh.

The three-spot in the second saw RBIs from Lee, Murphy and Sailer. Levi Stanfill, Lee and Murphy scored the runs.

Bethlehem got to starter Matt in the fourth. At one stretch, sixth consecutive players reached. Hilton, Trevor Slaick and Ty Whiting had RBI hits.

Tiftarea went to Presley to provide relief with two outs in the inning and his funky motion was able to slow down the Knights enough in an inning of work to give his team a fighting chance. They did not fail.

Down 6-3, the Panthers led off with fifth with a double by Murphy. Hammond, Moore and Matt had consecutive hits, Matt's a two-run double to deep right field. When Matthew Malone doubled to center, they went ahead 7-6.

Drew Stiles walked to start the bottom half and he came around on Hilton's single. Brady Logan and Hilton also came home during the frame. The Knights jumped back out to a 9-7 advantage.

At this point, however, everyone's bats were hot.

Four came over in the sixth for the Panthers, making it 11-9. Moore socked another double for two runs. Stanfill singled in Hammond and Malone hit a ball deep enough to left to sacrifice in Moore.

Now, it came time for pitching.

Logan drove in Parker Torres and Guthas batted in Logan to tie the game at 11-all with one out. Moore, who replaced Presley in the fifth, decided that was enough and finished with a strikeout and groundout to avoid further damage.

Sailer drove a ball to center in the top of the seventh. It was caught, but the Panthers went ahead as Presley scored. He'd led off with a single. Murphy, at third, was eliminated for the second out on an infield grounder by Hammond, but the locals pushed through one more crucial run.

Brown, courtesy running for Hamond, went to third on Moore's single. Matt smoked a base hit for a 13-11 score.

Moore got his first man in the bottom of the seventh, then Slaick walked. With two outs, he went to second on another walk. Cole Akins extended the game with a base hit and he and Torres were aboard with two outs. A double steal meant both were in scoring position.

Bethlehem hit a short fly to left, one that looked like it might fall, might be enough to win the game and the series. Out of nowhere, Malone ran in and made a sliding catch to send it to game three.

The Knights out-hit Tiftarea, 18-16. Thirteen players had multi-hit games, eight for Bethlehem. Torres had three hits to lead his team. Murphy was a perfect 4-for-4 and Moore was 3-for-4.

Bethlehem Christian's team is quite young, mainly freshmen and sophomores. Their hitting impressed Benson. "They're going to be good," he said.

Despite losing the first contest Friday, Benson said he knew his players could get the job done.