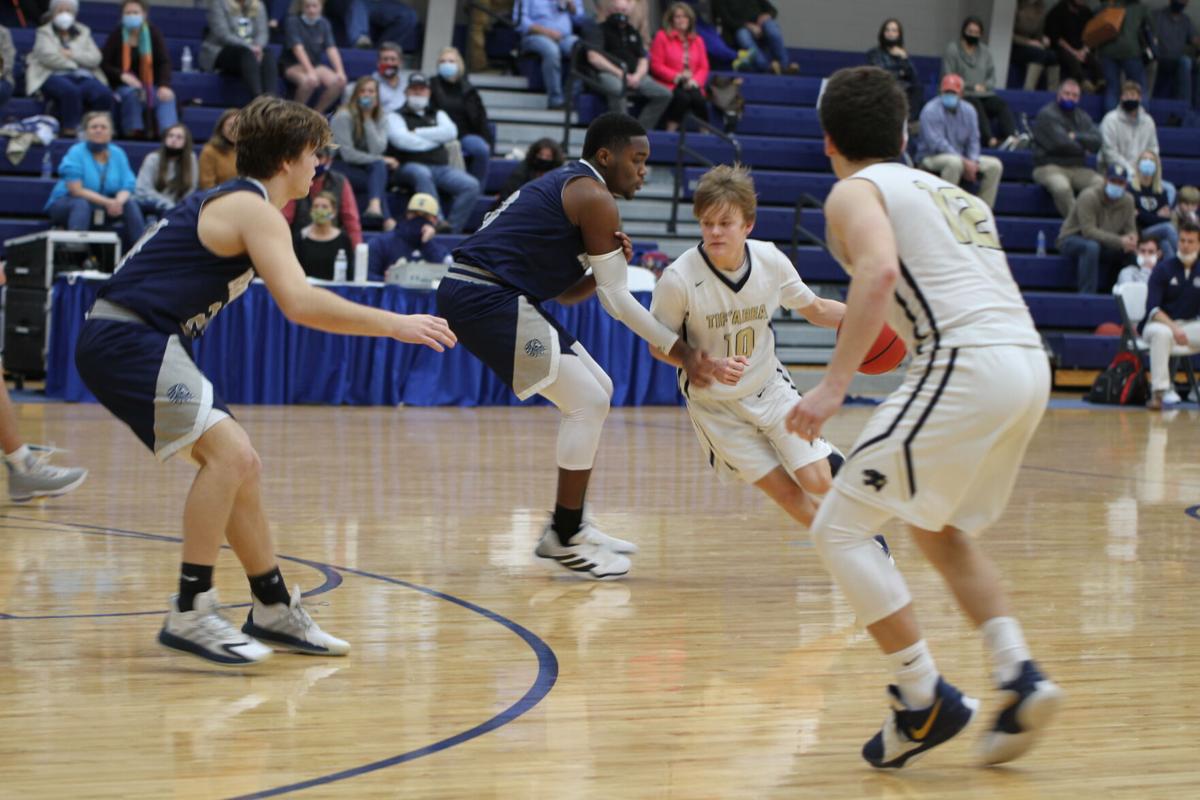 Colson Stewart (10) gives up size, but not guts, as he looks for an opening between two larger opponents. Dylan Harbort stands ready to take a pass, if needed. 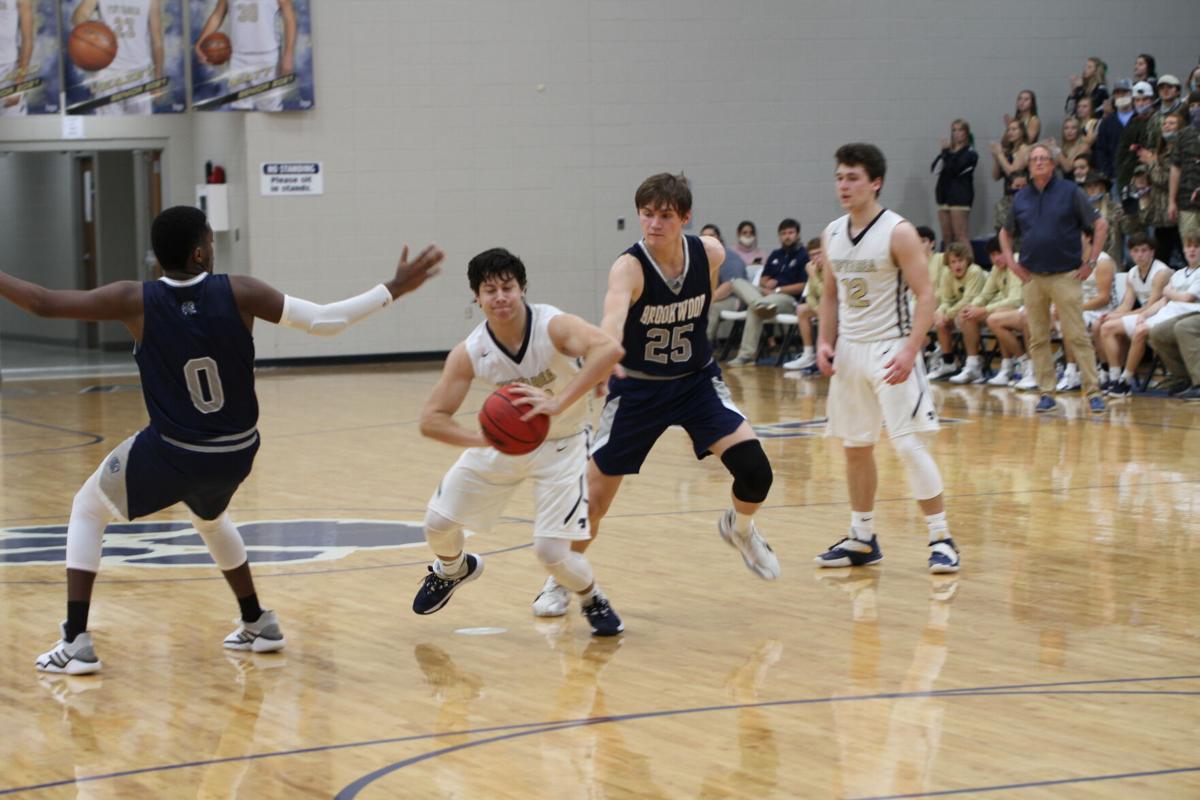 Mason Tyler ducks under and past Brookwood players looking for a steal. 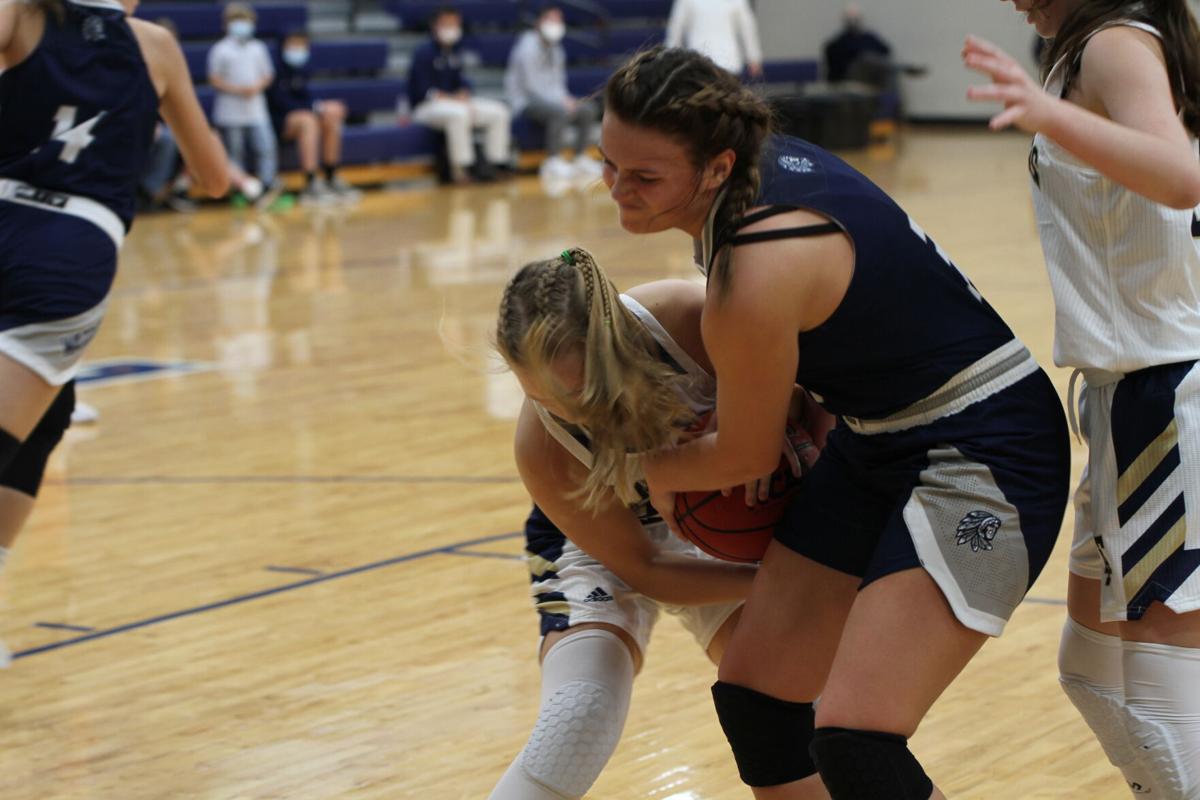 Grace Odom and a Brookwood player get into a tug-of-war under the Tiftarea basket during the first half.

Colson Stewart (10) gives up size, but not guts, as he looks for an opening between two larger opponents. Dylan Harbort stands ready to take a pass, if needed.

Mason Tyler ducks under and past Brookwood players looking for a steal.

Grace Odom and a Brookwood player get into a tug-of-war under the Tiftarea basket during the first half.

The Lady Panthers were not as lucky, falling to the visitors 69-60.

"We wanted to win them all," said Patrick, "but this is the most important one." With just four teams in the region, he said that any win is big. "We needed that one," he said.

Tiftarea kept hanging around Friday, down 13-10 at the end of the first quarter and 30-29 at halftime. The third period ended much the same, Brookwood ahead by a 43-40 count.

Ben Matt inched them closer, getting an assist off a Mason Tyler offensive rebound for the first poitnts of the fourth quarter. They tied it at 44-44 on Dylan Harbort's runner at 7:13.

Twenty-five seconds later, Harbort put the Panthers on top, 46-44 and everything began going their way.

After getting the ball back on a turnover at midcourt, the inbounds pass to Stewart almost saw him go backcourt. Stewart shoveled a desperation backwards pass to Cubbie Crosson, recovered, and made a three-pointer when Crosson flipped it back to him.

Stewart hit two free throws before giving Tiftarea its largest lead at 53-44 when he stole a pass and scored.

Kelton Lewis woke Brookwood up with a three by the bench at 4:28 and the Warriors began inching closer. Stewart drove the baseline for an easy score, but the Warriors followed with Dallas Forsyth's triple off an inbounds pass.

Crosson scored, then Brookwood made up another point on Davis Ledford's three. It was now 57-53.

Hayden Murphy hit three-pointer from the corner. Garrett Ledford countered with the same. The lead narrowed to 61-60 when Garrett Ledford made two quick baskets and locals were on edge when the Panthers missed a layup at the other end.

Brookwood attempted to hustle a pass to their end off the rebound and Stewart made a leaping interception. With 15 seconds to go, Stewart made both ends of a one-and-one for a scant 63-60 advantage.

The Warriors called time with 11 seconds left and set up their play. A three-pointer missed, as did an attempt under the goal and Tiftarea held on.

"It took a lot of heart tonight," Patrick said.

"Mason coming off the bench, giving us some minutes. Colson's injured and came back and played hard in the stretch. Hayden's the heart of the team. I'm proud of Cubbie. Cubbie played big minutes; he probably played the whole fourth quarter. You go on down the line."

The first quarter was back-and-forth, starting with Davis Ledford and Stewart trading threes. Brookwood scored the last two baskets of the frame.

Two minutes into the second, the Warriors were ahead 20-10 and the lead peaked at 24-12 when T.J. Thomas netted four straight points.

Tyler assisted Matt to start a little run, Murphy contributing five points to get them to within 26-21. Lewis pushed it back to 30-21, but Murphy and Harbort were warming up and when Harbort drove in for two points at the end of the half, the lead was down to a single point, 30-29.

Matt gave the Panthers a brief lead at the start of the third canto. Brookwood got back on top, but never by more than five points.

Stewart and Murphy paced the Tiftarea attack, with each prefering a half for his magic. Murphy scored to 10 of his 15 in the first half and Stewart had 14 of his 18 points in the last nine minutes.

Lewis' 14 were tops for the Warriors. Garrett Ledford scored 10 and Davis Ledford was close behind at 9.

Layups or free throws. Tiftarea head coach Amy Strenth said it seems like she has one or the other working in each game. Against Brookwood, it was free throws. They were 22 of 30 from the line.

Strenth said her squad made a nice run, but just could not overtake Brookwood.

Tiftarea led the contest 28-18 with five minutes to go in the second quarter, when Livi Mullis stole the ball and converted the layup. Barely three minutes later, the Lady Warriors were on top.

The 14-0 run featured lots of Eliza Eiford. She had half the points in the streak and Erin Lewis made a three-pointer. When the teams recessed for the half, Brookwood was ahead 36-30.

Threes in the third by Jordan Lewis and Eiford saw the lead balloon to 42-33, but Tiftarea was not out of it. They made 4-of-6 at the line and added an Elli Bryan basket to get to 42-40.

Later in the period, Ali Strenth and Mullis got them to within two points on three occasions.

However, Kendall Boggs scored a three-pointer to wrap up a 55-50 lead for Brookwood. Threes by Lewis and Eiford in the fourth, all but cinched the victory.

Bryan and Mullis scored the last four points, but with 50 seconds remaining, there was too little time to stage a bigger comeback.

Tiftarea trailed by five points in the middle of the opening quarter, but finished on a 13-2 run. Strenth, Bryan and Allee Cooper had four points each for a 21-15 lead at the end of the string.

A trio of Lady Warriors had a big impact on the final score. Eiford scored 18 points, Ella Grace Squires had 17 and Lewis added 15.

Bryan and Mullis scored 15 each for Tiftarea. Strenth notched 14.