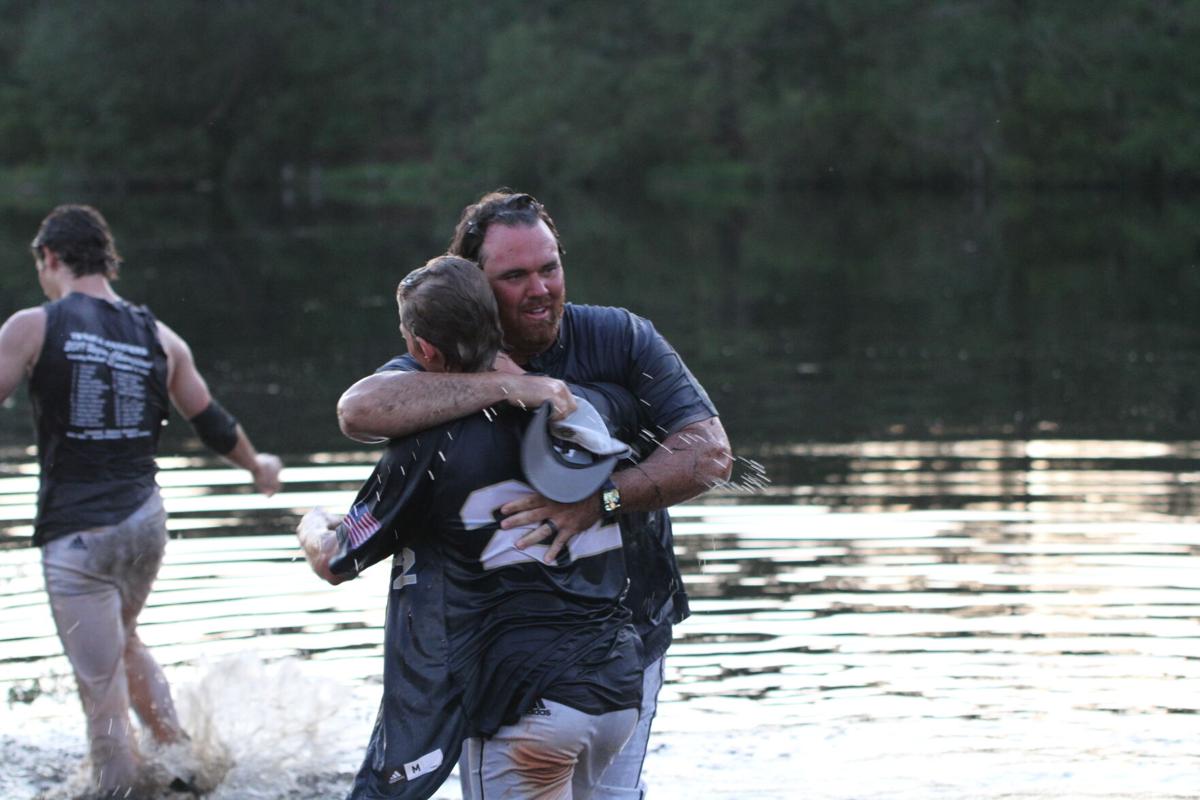 Tiftarea head coach Chance Benson hugs John Austin Lee on the banks of the school pond. Minutes after players jumped in, they picked up their leader and made sure he got soaked as well. 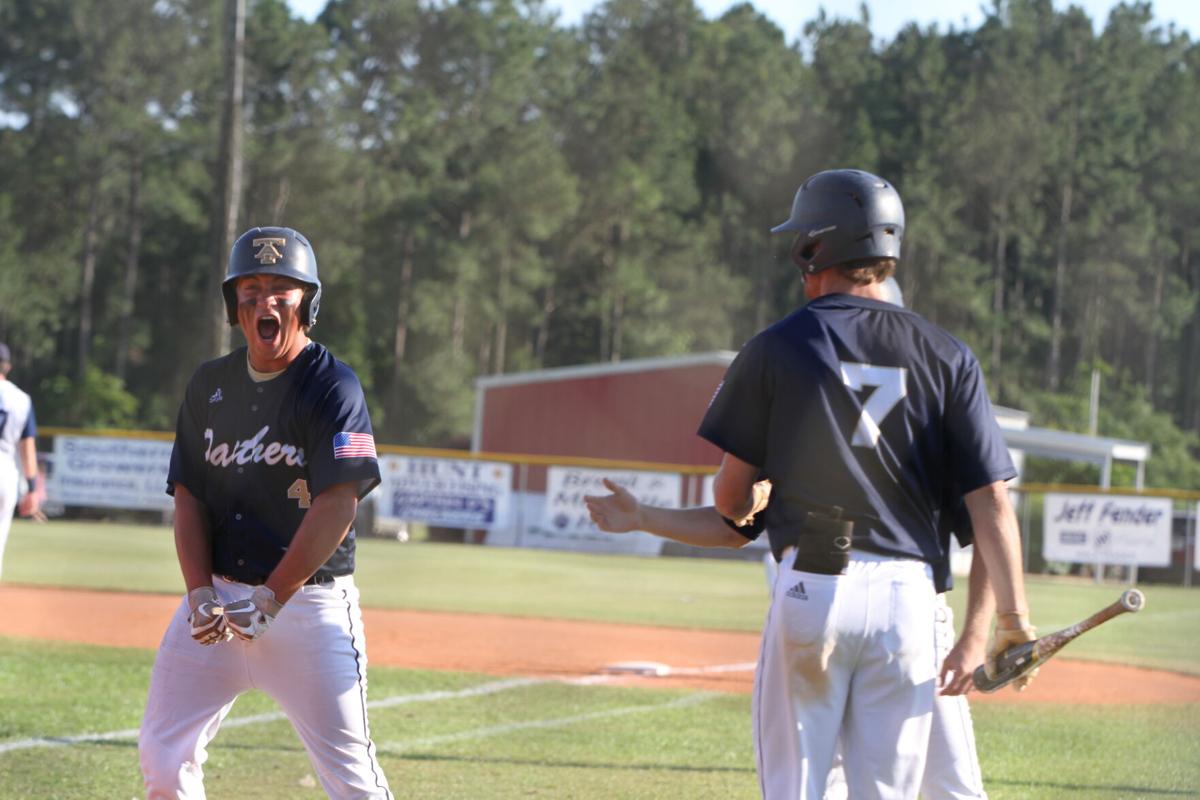 Levi Stanfill screams in delight after he was one of two runs to score on Jam Presley's second inning double.

Tiftarea head coach Chance Benson hugs John Austin Lee on the banks of the school pond. Minutes after players jumped in, they picked up their leader and made sure he got soaked as well.

Levi Stanfill screams in delight after he was one of two runs to score on Jam Presley's second inning double.

CHULA - First, the fence came down. Then, they went into the pond. Then, Tiftarea Academy baseball players picked up head coach Chance Benson and dunked him in the pond.

It was all part of a very happy celebration Saturday after the Panthers punched their ticket to the GISA state finals with an 8-3 victory over Brookwood School to win the series, 2-1.

Tiftarea will play at Mercer University May 21-22. They will learn their opponent Monday as John Milledge Academy and Pinewood Christian split games Saturday in Milledgeville.

"I can't think of a better group of kids," said Benson, before his bath. "They played their hearts out today and made so many big plays."

Mere seconds after speaking, the Panthers gathered Benson up and headed for the pond. There was a suggestion to toss in assistant Rob Flick as well, but Flick willingly made the plunge.

The celebration was the players' idea, Benson said.

"They said they were going to break the fence and jump in the pond."

Despite the final score, the contest was a very close one, tied 3-3 going into the bottom of the sixth.

The rally began quietly, Jam Presley working a walk with one out. A wild pitch with Hayden Murphy up moved him to second and, when Murphy blooped a single, runners were at the corners.

Murphy's hit did more than increase the chances of scoring. It was the last toss for reliever Parker-Madison Mirick, who was near the 120-pitch series limit for pitchers.

Seconds later, Sailer sped home on a wild pitch, making it 6-3. Brock Hammond followed with a sharp single and Justin Moore came in as his courtesy runner.

That brought up Logan Moore.

What happened next will no doubt become legendary. Moore crushed a pitch that kept flying and kept soaring, bouncing off the top ridge of the batter's eye in deep center. Benson said he had never seen a fall fly that far in that stadium.

Ben Matt singled and Levi Stanfill walked. However, that was the end of the scoring after Matt was thrown out trying to advance on a wild pitch. Brookwood got a strikeout to send it to the top of the seventh.

Murphy started the seventh with only 22 pitches until he reached the count limit. He only needed 12 to finish out the save.

He struck out his first man on three pitches, got the next to fly out to John Austin Lee. Jacob Lauderdale kept the Warriors chances going with a double, but Murphy coaxed a fly to Sailer in center, setting off the celebration.

Tiftarea's hitting provided the final boost. Defense and pitching were the story for the first six frames.

Zack Counts began with a double and McLendon singled. Runners were at first and third with no outs and it looked like starter Logan Moore was in deep trouble.

Brookwood rapped a ground ball to Murphy at shortstop. He tossed to Presley for one out and Presley went to Matt at first for the second. Then Matt happened to notice a wandering runner.

Matt threw to Hammond at the plate to chase the man back to third. Hammond then threw to Presley, helping cover, for a tag and a triple play.

The Panthers scored their first two in the bottom of the second.

A single by Stanfill and an error off the bat of Matthew Malone set up a double by Presley that dropped under the right fielder's glove.

Brookwood countered with three in the third, all runs scoring on a bases loaded double by McLendon. Collin Clark singled and Christopher May and Counts had reached on errors to fill the bags.

Tiftarea avoided further trouble when a potential sacrifice fly turned into a double play when Sailer nailed the runner at the plate.

Malone squared the score in the fourth. He doubled, was bunted to third by Lee and scored on a soft roller by Presley to second.

The big pitching moment of the game came in the fifth.

Moore threw a valiant four innings, but a leadoff single by Counts spelled the end of his night. McLendon walked and Lauderdale made first on an error, loading the bases again with no outs.

Matt, now in to pitch, buckled down, and perhaps had his finest moment on the mound. He struck out his first man, he fanned his second and left Brookwood with a zero when a fly to Sailer ended the inning.

"That's unreal," said Benson of the triple play and Matt's comeback happening in the same game.

The pitch count was a big factor Saturday, especially after a violation stirred the public school playoffs 24 hours earlier. Thomasville was forced to forfeit their quarterfinals victory over Callaway after one of its pitchers went over the limit.

Brookwood was forced to go its bullpen in the third when Lauderdale hit the pitch limit. Benson was even more careful, lifting Matt for Murphy in the sixth when Matt had a 2-1 count on a batter.

Tiftarea had eight hits in the game, by eight different players. Counts, McLendon and Clark each had two hits for the Warriors.

Benson said it was a shame someone had to lose Saturday. Tiftarea had won the first game of the series, 6-1, before a sixth-inning spark allowed the Warriors to come back to tie the series.

Chance Benson goes into the pond