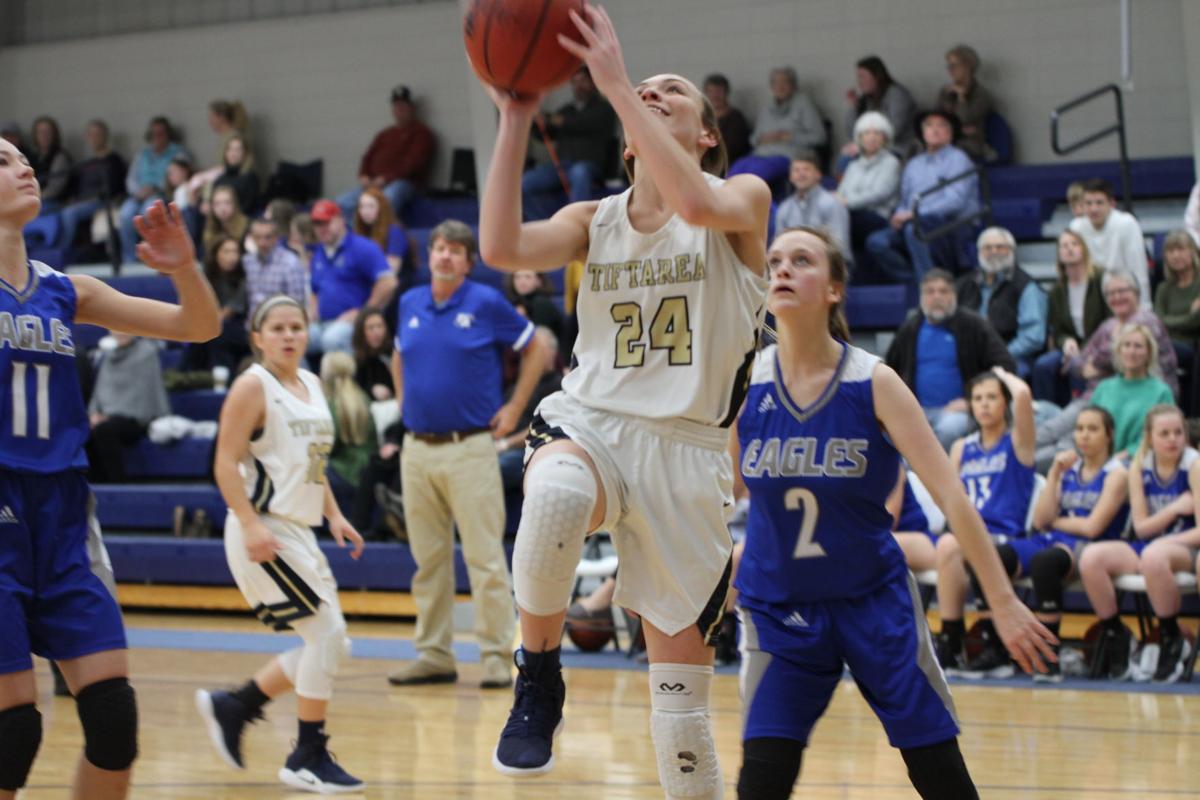 Tiftarea's Ally Pate drives in for a first half lay-up against Terrell Academy Friday. 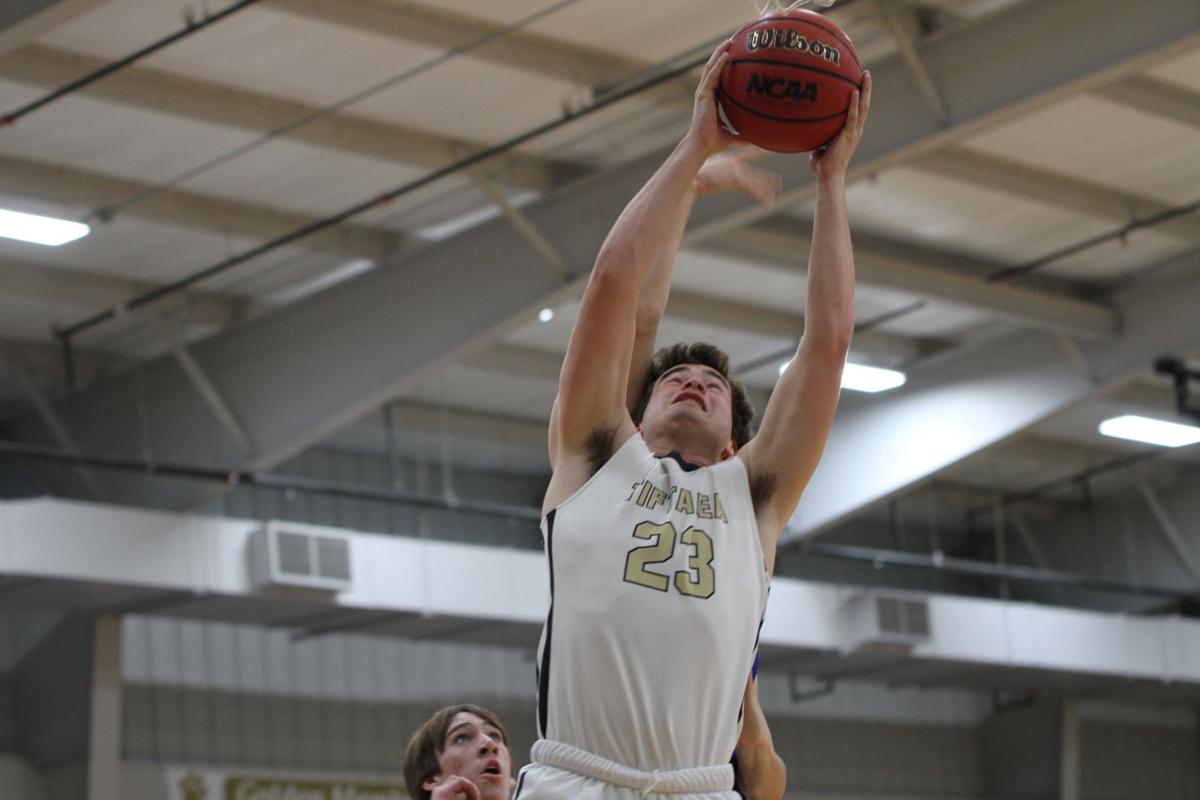 Tiftarea's Ally Pate drives in for a first half lay-up against Terrell Academy Friday.

CHULA - The Tiftarea Academy Lady Panthers broke a skid, but the Panthers found the going a bit rougher Friday as the teams split games with Terrell Academy.

The Lady Panthers used odds in their favor to beat Terrell, 41-39, while the Tiftarea boys dropped a 73-30 decision to the Eagles.

Tiftarea Lady Panthers head coach Amy Strenth said she and assistant Rob Flick had recently been working on what to do in late-game situations when they were up three points. It happened to work out Friday they could give their idea a try.

Carlie Strenth made two free throws with 27 seconds remaining in the game for a 41-38 Tiftarea lead.

At their end, Terrell took a shot and missed. Allee Cooper grabbed the rebound for the Lady Panthers, but had the ball stripped by Laiken Daniel. Terrell called time with 6.9 seconds on the clock. The plan then went into action.

Terrell inbounded to Daniel, who was immediately fouled at 5.2 seconds. This was Tiftarea's eighth team foul and sent Daniel to the free throw line for a one-and-one opportunity. She made the first, but missed the second.

Ali Strenth rebounded and was fouled. At 3.7, she missed a one-and-one on her end of the floor. Terrell grabbed the ball, but in their haste to quickly get it up the floor, Ali Strenth stole it away and dribbled out the clock.

Head coach Strenth said she and Flick opted to foul Terrell quickly because of the odds. With a one-and-one, the Lady Eagles might only get one shot. Even if Daniel made both, Tiftarea would have had the ball out-of-bounds — and the lead — with five seconds to play.

"He's been huge to me," she said of Flick's help on the bench.

Tiftarea and Terrell seesawed all night. One took a lead, but the other always came right back.

Elli Bryan and Bailey Jones put Tiftarea up 5-0. By the end of the first quarter, the Lady Eagles were ahead 12-11, courtesy of Kate Douglas' three as time expired.

It was more of the same in the second. Jones assisted Ally Pate for the Lady Panthers to go up four points, 18-14. Douglas had another long shot to go ahead 23-21. Bryan tied it 23-all on a Cooper steal and assist, but again Terrell's late points game them the advantage. It was 27-23 at the halftime.

Tiftarea chased Terrell throughout the third, but finally saw things swing their way in the fourth.

A Bryan shot knotted the score at 34-34. Cooper made a three off an inbounds play and roles reversed. Terrell had to switch to pursuit and points suddenly became difficult to obtain.

Bryan's 14 paced Tiftarea, which used only seven players in the victory. She was the only Lady Panther to hit in double-digits, though Carlie Strenth scored eight.

Head coach Mike Patrick admitted his team ran out of gas in the second half. This game was a night after one in Damascus ended in overtime. Tuesday, they had played Southland Academy in Americus.

The Panthers hung with the Eagles for 16 minutes. Adam McKinney's three-pointer started things off and though Terrell quickly jumped out to a lead, the locals were right there.

Ross West hit a three-pointer for a 10-5 score, but Banks Johnson answered with a pair of free throws. Dow Johnston returned a miss and when Sellers Veazey scored off an assist from McKinney, the Panthers were up 11-10.

The Panthers had an even better run in the second. Terrell again had a lead, but within a minute Crosson's three-pointer had them back ahead. This expanded to 22-16, courtesy of threes by Crosson and Gray Patterson.

At 3:10 in the second, Cameron Jones made a runner. The Eagles went ahead 23-22 and it turned out to be for keeps.

Tiftarea trailed 30-24 at halftime, but a rotten string of luck started the third frame and continued into the fourth. Patrick's Panthers constantly battled but the basketball seemingly refused to go into the net.

Further against them, "We didn't get any loose balls," said Patrick, whose team picked up another injury. John Adam Copeland tweaked an ankle during play.

Crosson finished with 11 for Tiftarea.

Nick Chambless led Terrell with 23 points, 15 coming in the third quarter. Joining him in double figures were Garrett Sloan (11), Cameron Johnson and Jones, the latter two with 10 each.

Not all news was bad for the Panthers Friday. Thursday night, they won their third game of the season, outlasting Southwest Georgia Academy, 77-68 in overtime.

The Lady Panthers dropped a 46-42 game to SGA. Carlie Strenth had 14 points and Cooper netted nine.

Tiftarea goes to Valwood Tuesday for the final GISA Region 3-AAA game of the season. Should Tiftarea win the boys game, they will host the region play-in game, which would also be against Valwood.

The Panthers and Lady Panthers will be home next Thursday for Senior Night against Crisp Academy.