Elli Bryan zips past a Citizens Christian defender. Bryan, who has had to don a protective mask since being injured against Echols County, scored 11 points for Tiftarea. 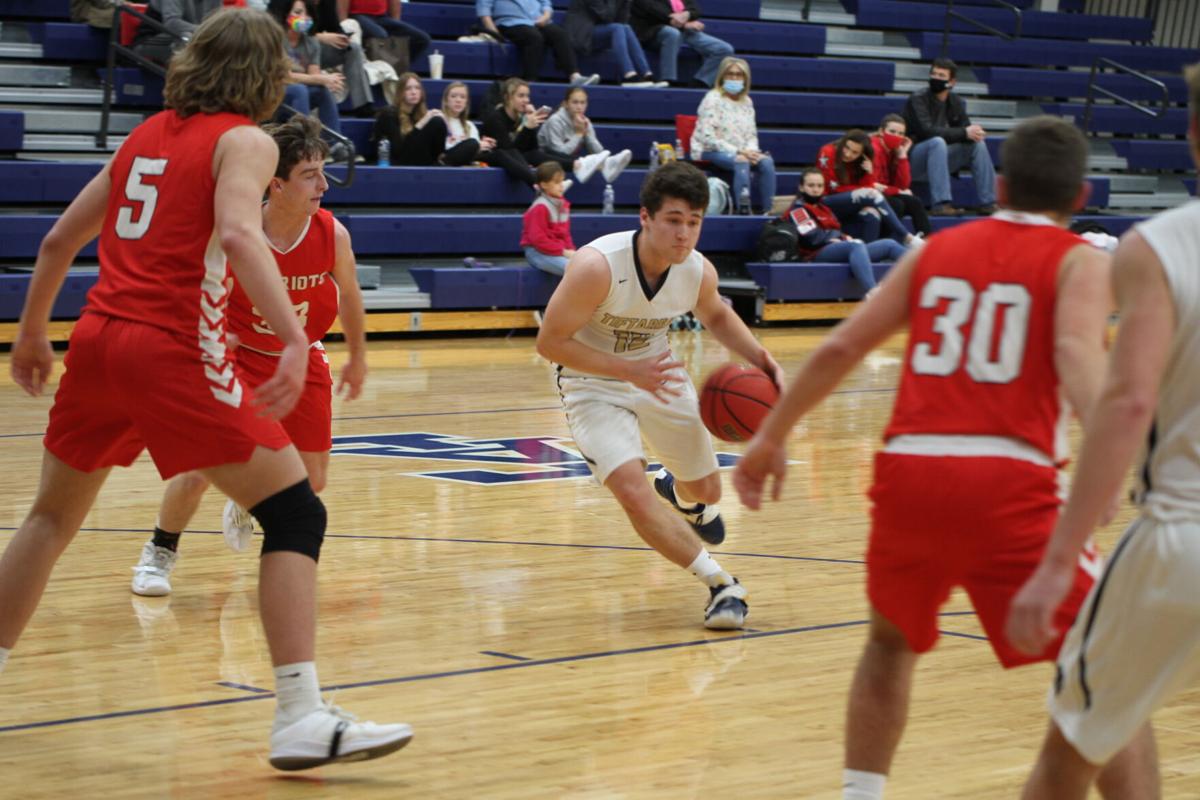 Dylan Harbort slides in between three Citizens Christian defenders before pulling up for a first quarter jumper. Harbort scored 9 points on the evening.

Elli Bryan zips past a Citizens Christian defender. Bryan, who has had to don a protective mask since being injured against Echols County, scored 11 points for Tiftarea.

Dylan Harbort slides in between three Citizens Christian defenders before pulling up for a first quarter jumper. Harbort scored 9 points on the evening.

Citizen Christian's Abbie O'Steen had hit a three-pointer at 5:18 in the third quarter and Tiftarea was now down 12 points, 35-23. They had not been playing well, enough for head coach Amy Strenth to raise their game.

The words finally sunk in. They not only cut into the lead, but when Allee Cooper's three-pointer swished the net with nine seconds to go in the third quarter, Tiftarea was ahead, 42-41.

Tiftarea went on to win 58-53, a split night, as the Panthers could not maintain any momentum in a 65-59 loss.

"I told them that wasn't the group of players who came to practice every day," said Strenth.

The path the rest of the way was not easy.

The Lady Patriots scored the first two baskets of the fourth to regain the lead.

Livi Mullis returned an offensive rebound, then Cooper stepped up again at 6:10. CCA went silent for the next two minutes, allowing Ali Strenth and Elli Bryan to score, Bryan on a scoop layup.

"We played hard the second half," Strenth said. It also helped, she said, that they stayed out of foul trouble.

Addie Vickers got Citizens Christian back into it, then Bryan, Strenth and Cooper scored in a row to go ahead 56-47. That nearly wasn't enough.

Back-to-back baskets by Emma Rish meant it was 56-53 with 1:01 to go. Thankfully, Cooper assisted Grace Odom on a jumper with 10 seconds later that Strenth said "sealed the deal." That turned out to be the end of the scoring.

Tiftarea jumped out to 5-0 and 13-5 leads in the first frame Tuesday, but soon found themselves locked into a battle.

A free throw by Anslei Reyes tied it up at 19-19. Cooper and Mullis scored, but the visitors responded with eight straight points to close out the half. CCA then scored the first eight of the third before the Lady Panthers found their feet.

Cooper scored nine points after halftime and had 15 overall. Others in double-digits for Tiftarea were Strenth (12) and Bryan (11). Rish had nearly half of her team's total at 24 points.

"We'd get a run, we'd get it down to three or four or five and then all of a sudden, they'd come back and hit a three," said head coach Mike Patrick.

Tiftarea and Citizens Christian were neck-and-neck for most of the contest. Down 19-15 at the end of the first, the Panthers started the second with a slash to the bucket by John Adam Copeland.

"We broke their press," said Patrick, "but we didn't convert every time like we should have."

Ben Matt deposited a Patriots save attempt under the basket for an easy two points. Fifteen seconds were on the clock and it looked like Tiftarea might have the final say in the half. They did not as Will Waldron put two points through the hoop. Six-tenths of a second remained. The Patriots went into intermission ahead 38-29.

It looked like the Panthers could break CCA's hold over them. They shot out of the second half with five points, courtesy Hayden Murphy and Stewart. They pulled as close as 40-37 on a Matt basket at 5:02.

Six quick points went on the scoreboard of the Patriots to end the threat. The Panthers trailed 49-43 going into the fourth.

Stewart stepped up again by going coast to coast early in the first minute of the fourth frame. Waldron and Amerson pushed the advantage back up to nine points. With 1:56 left, it was 59-51. The Panthers tried one last push.

Dylan Harbort stepped back for a three-pointer with 25 seconds left. The Patriots missed the front end of a one-and-one and Harbort corraled the rebound and tossed ahead to Stewart for a layup with 11 seconds left to make it 63-59.

Tiftarea fouled to send the Patriots back to the line. This time, they didn't miss, Amerson hitting both shots to close the door.

"Brooks kept us in the game early," Patrick said. "Colson hit some shots."

Amerson's 21 paced CCA. Walker Altman was close behind with 16 points and Dease had 10.

Tiftarea will be back home Thursday for Senior Night against Georgia Christian.