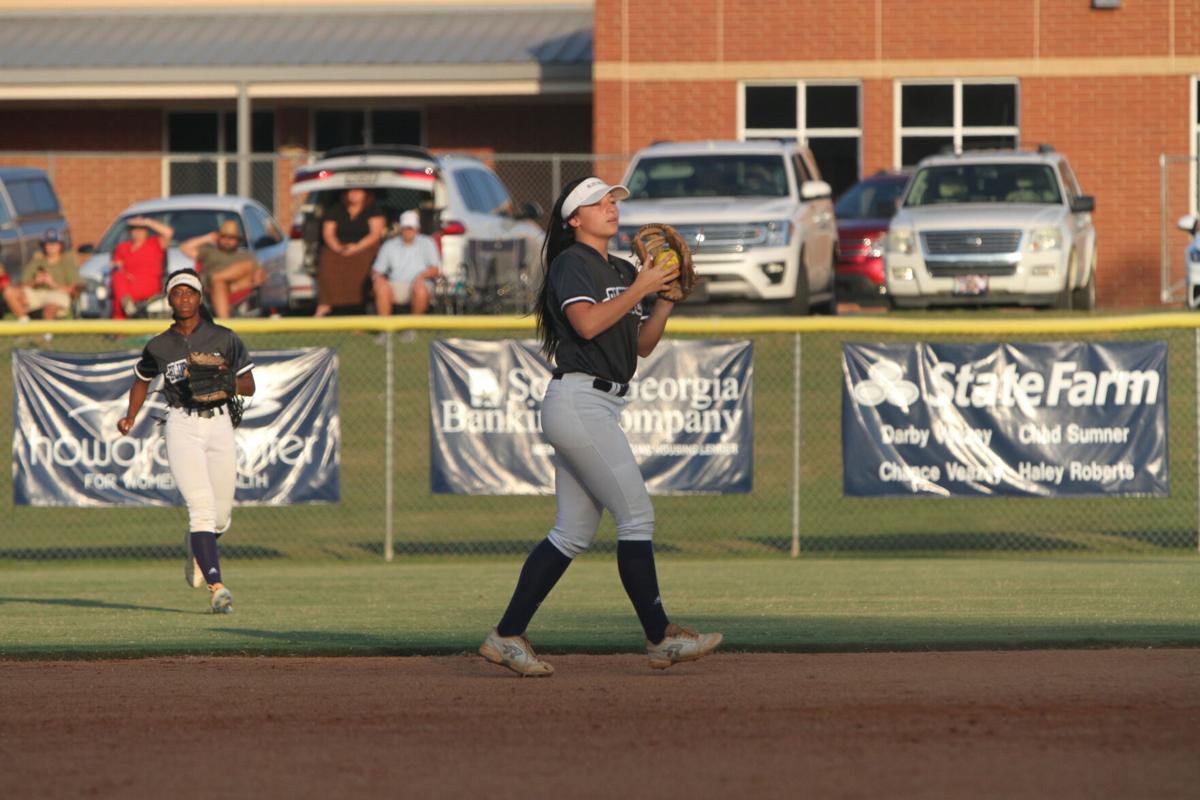 Meg Branch catches a pop fly for the final out of Tift's 5-2 win Wednesday. 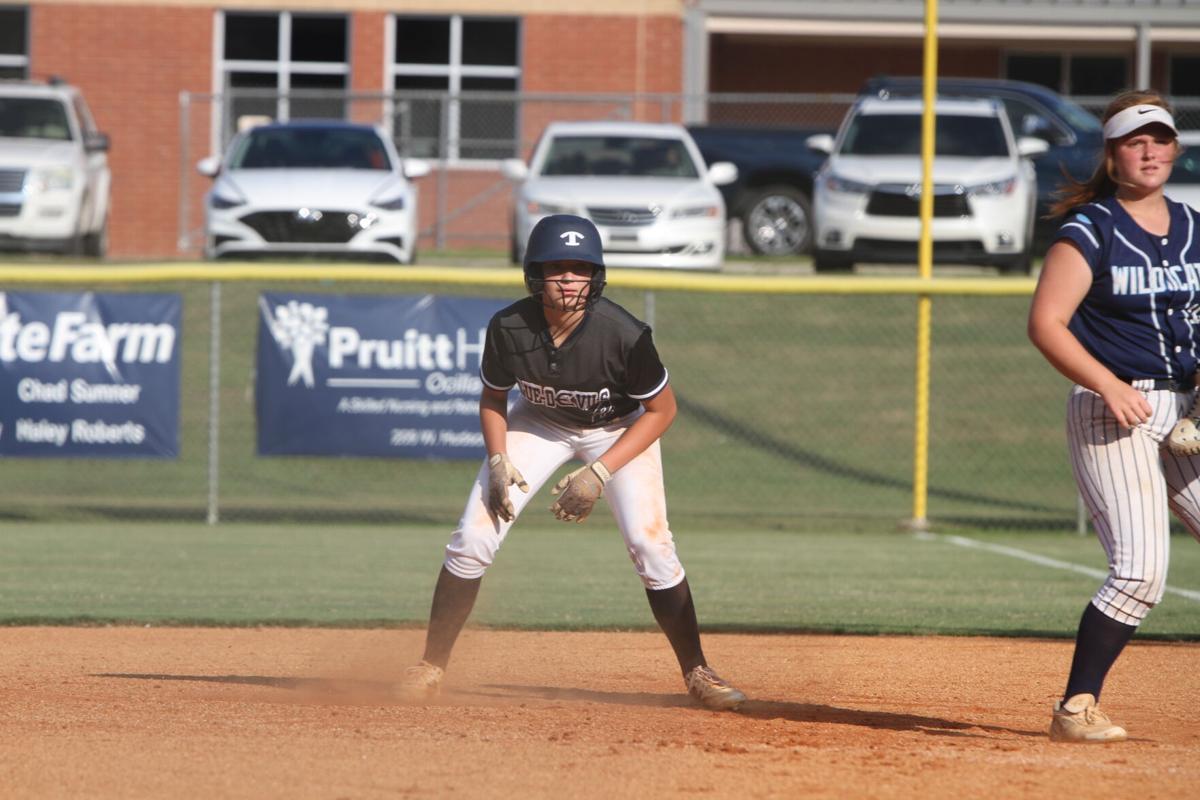 Camden Anders take a lead off first base. It was her RBI single that gave the Lady Devils a lead they never relinquished. 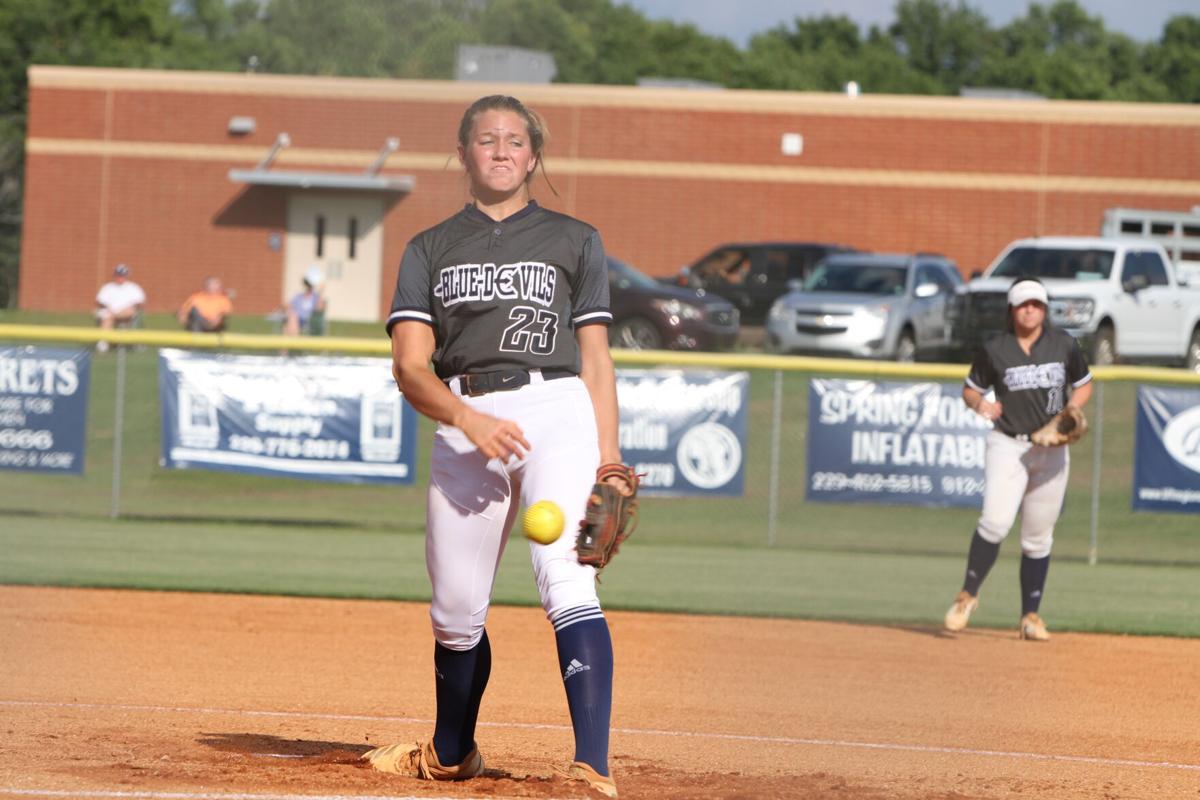 Meg Branch catches a pop fly for the final out of Tift's 5-2 win Wednesday.

Camden Anders take a lead off first base. It was her RBI single that gave the Lady Devils a lead they never relinquished.

Oct. 15 update: GHSA brackets list Tift as going to Brookwood for the first round of state.

TIFTON - Perhaps it's fate. One of those things that are meant to be. Camden Anders does damage against Camden County.

Wednesday afternoon, Anders broke a 2-2 tie with a single in the bottom of the fifth inning. Tift County went ahead 3-2, then added a couple more runs for a 5-2 victory.

"It's funny," said head coach Taylor Barber. "Probably the three biggest hits she's had all year, they were against Camden." At Kingsland earlier this season, Anders drove in two runs in one game of a doubleheader and started a rally in the other.

The victory Wednesday was the third and final game to determine third place in Region 1-7A. Tift won 2-1 in the opening game Tuesday, but Camden County came back, 6-5, making a third game necessary.

Both teams advance to the state playoffs. The Lady Devils will go on the road to face the No. 2 team from Region 4, a team yet to be announced. Newton, Brookwood and Parkview are all vying for places 2-4 behind region champion Grayson.

All three teams sport 6-6 records after Newton dropped a doubleheader to Grayson Wednesday. The tiebreaker for the region is unknown, but Newton has a 1-2 record against Parkview and is 2-1 versus Brookwood. Brookwood is 2-1 against Parkview.

"I'm proud of them," said Barber of his Lady Devils. "We played about as crisp defensively as we can. It shows them, if we play crisp, you're going to find yourself in some ballgames."

Neither team recorded a 1-2-3 inning in the contest, but even after combining for six hits in 2.5 innings, no one had crossed home.

That started to change when Paige Hill doubled to left to start of Tift's half of the third. Camden got an infield out, then Bailee Williams doubled to right-center to go ahead 1-0. Williams' alert baserunning allowed her to go to third on a grounder to third, which allowed her to easily score on Gracee Wood's single.

However, like they had often Tuesday, the Lady Wildcats came back and knotted the score in the fifth.

Michael Walton poked a single and went to second on a sacrifice by Khrysta Jordan. With two outs, Lexi Foskey extended the inning on a walk and both runners were cleaned up on Kourtney Whitten's double. A grounder to Wood at shortstop ended the inning.

The Lady Devils did not let the momentum carry any further.

Josie Bullington socked a one-out single to right and Wood reached on a walk. The two were still there with two outs, but rather than let Camden escape, they rallied.

Morgen Ray's grounder to third was bobbled and all hands were safe. Up to the plate stepped Anders with the bases loaded. She found a hole in left field and Bullington came home.

Madison Smith was in the batter's box when a pitch got away and Wood came in to make it 4-2.

This time, there would be no return from Camden. "We hit them in the mouth. We got hit back in the mouth and we never got tight," said Barber.

Hill got a strikeout in the sixth and left a runner at first. Her teammates provided a little insurance in the bottom half.

Williams rapped a sharp single, moved up on a wild pitch and took advantage of another infield grounder to get to third. Wood came through with a hit for one more run.

Jordan bunted her way on in the seventh, but Ray caught a foul fly, Hand snagged a ball in left field and Meg Branch secured the win on a pop fly to second. "She's been lights out this year," said Barber of Branch's defensive work.

Tift accumulated 12 hits in the game and every player reached base at least once. Hill, Williams, Bullington and Wood had two hits each. Wood drove in two runs.

"We hit it well all day long," he said. After solid contact both days, Barber was happy that Wood was able to get balls to fall in for hits.

Hill pitched her third complete game in two days, striking out six. Amzy Cody was in the circle for her third full game of the series for Camden.

Though all four teams in Region 1 advance to state, it was a bonus for Tift to go in third. From 2016-19, only three of the four teams in the conference qualified. Tift finished fourth during each of those seasons.