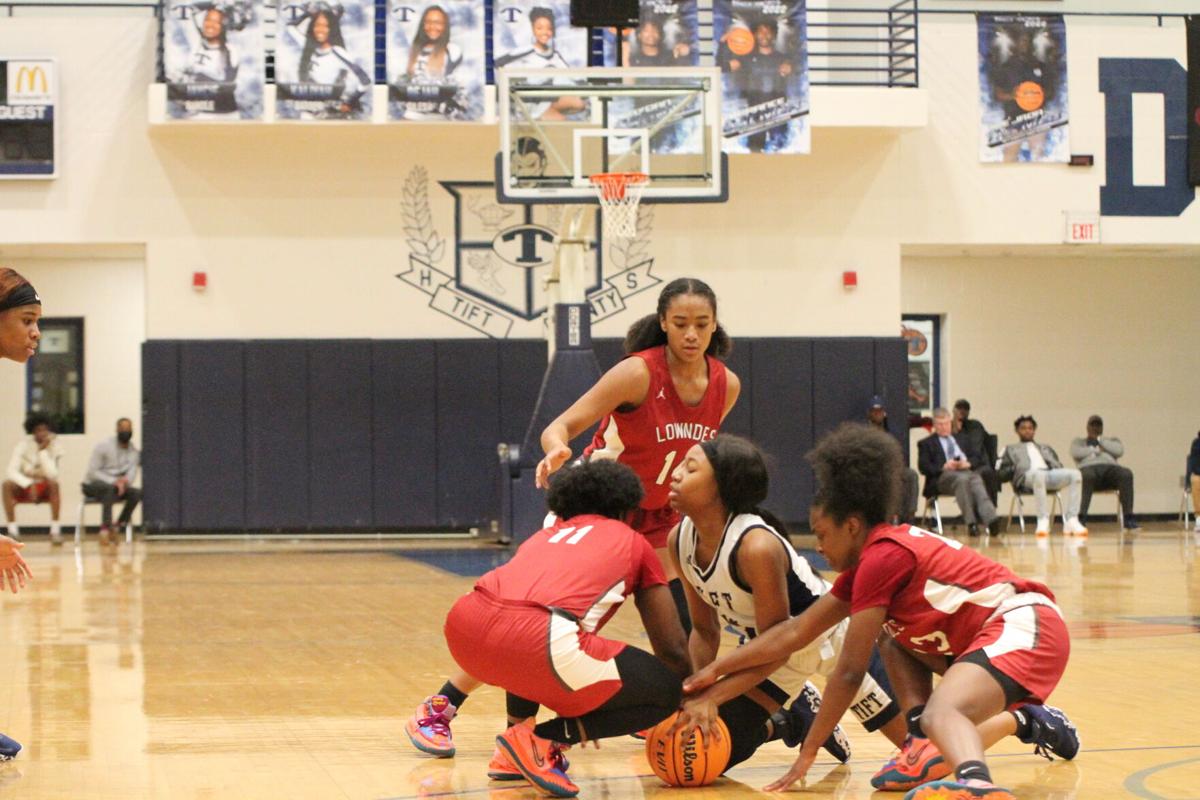 Three Lowndes Vikettes converge on Tift's Caitlyn Burgess, but none can get the ball from her. From her knees, Burgess flipped a pass to Shakiria Chaney who drove in for basket. 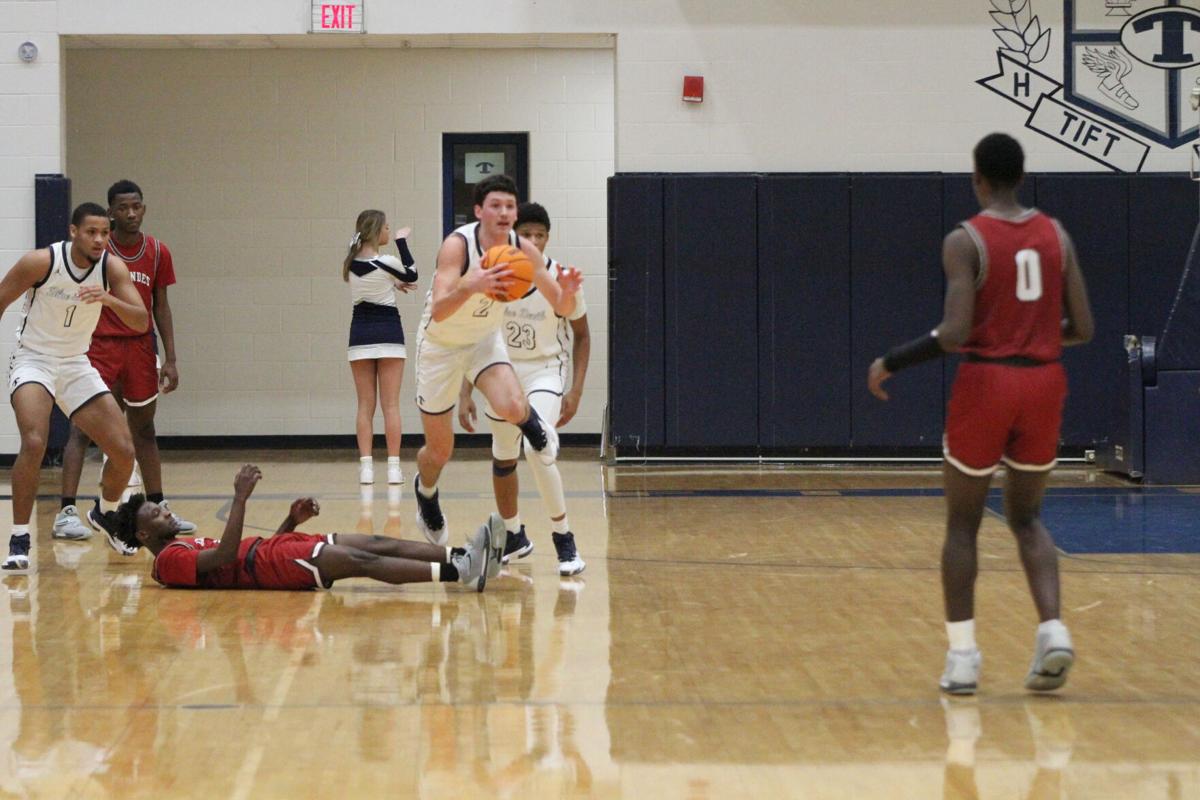 Tift's Henry Gebhart (2) leaps over a Lowndes player to make a pass after picking up a loose ball. 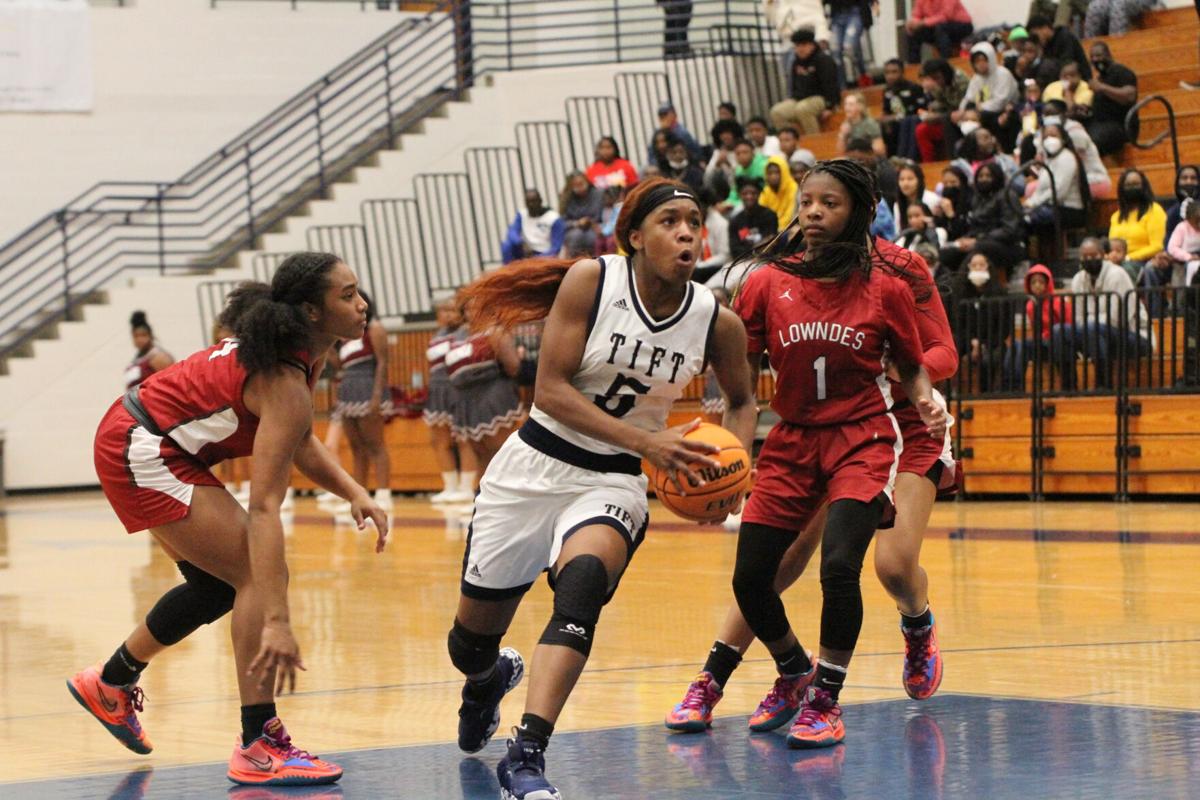 Shakiria Chaney (5) slides into the paint against Lowndes to add two more points to her total.

Three Lowndes Vikettes converge on Tift's Caitlyn Burgess, but none can get the ball from her. From her knees, Burgess flipped a pass to Shakiria Chaney who drove in for basket.

Tift's Henry Gebhart (2) leaps over a Lowndes player to make a pass after picking up a loose ball.

Shakiria Chaney (5) slides into the paint against Lowndes to add two more points to her total.

TIFTON - Tift County and Lowndes opened the 2021-22 Region 1-7A basketball slate with a bang Friday night, splitting a pair of games that might already have major implications.

The Lady Devils defeated Lowndes, 64-52. The two have been predicted to be the top schools in the region. The boys race, more wide open, saw the Vikings defeat Tift, 59-38.

Tift's and Colquitt County's girls are tied at the top of 1-7A as the Lady Packers defeated Camden County Friday in the other region matchup. The Vikings, however, are all alone at the top of the standings; Colquitt's Packers are sidelined with COVID issues and their game with Camden did not take place.

"We had their number," said head coach Julie Conner. She noted that Lowndes had played well all season.

The Lady Devils spotted Lowndes a quick 5-3 lead, courtesy of Otaifo Esenabhalu and Kaci Demps, but were only briefly challenged afterwards.

An outlet pass from Braxton Gipson to Mya Cushion put Tift up to stay at 4:22 and by the end of the period it was 11-5 as they began heating up from distance.

Skye McCrae and Gipson landed first quarter three-pointers. Seven more followed over the course of the game, plus Gipson had an old-fashioned three-point play when she was fouled under the goal early in the second.

Soon after Gipson scored, Caitlyn Burgess flipped a pass from her knees to a Shakiria Chaney that resulted in a basket. At this point, it was 17-8 and not getting any better for the visitors.

Faith Johnson managed a score, but Tift immediately set forth on a 7-0 run, one made even more frustrating for the Vikettes as five of the points came directly off offensive rebounds. Lowndes found it nearly impossible all night to get rebounds, despite having the size advantage.

Chaney put the explanation point on the Lady Devils inside dominance with 25 seconds left in the half when she posted up and scored over the much taller Esenabhalu. They were ahead 30-18 when the teams went to the locker rooms.

Lowndes ended the half with a score. They also started off the third quarter on a run, with a free throw by Amyah Espanol cutting Tift's lead to 30-26 at 6:28.

O'ashia Cushion responded with a three for Tift, equalled by one by Demps for Lowndes. But the Lady Devils had no interest in letting the Vikettes hang around.

Tamyra Carter hit from behind the arc and the Lady Devils were on fire again. Over a span of 90 seconds Tift scored 12 points, eight by Carter and the other four from Faith Hillmon. The four-point lead was long gone, having swelled back to 16 at 45-29.

Espanol helped the Vikettes chip the advantage down to seven points near the end of the frame, but it was Carter again stepping up to stop the bleeding. The lead never dipped below 10 again.

Three by McCrae and Mya Cushion, plus four points from Chaney put Tift ahead by 15, 64-49, with 1:20 left before Espanol made a last three.

Carter lit up the net for 16 points, 13 in the second half. Chaney and McCrae scored 11 each.

Demps paced the Vikettes with 17 points, with Johnson adding 15.

Between games Chaney was honored for scoring her 1,000th career point, which occurred Dec. 28 against Holy Innocents' at the Deep South Classic. Cheerleaders and players formed rows for Chaney to walk through with her family. Head coach Julie Conner presented Chaney with a basketball and plaque for her accomplishments.

Some nights, the basketball refuses to obey gravity and go through a net. This must have felt like one of those nights for the Blue Devils.

Lowndes jumped out to a 9-0 lead Friday before Ty'Quan Mills drove the lane for a basket at 1:09. A second basket, one from Christian Jones, soon followed on a Vikings' goaltending violation.

The lead slowly grew for the Vikings, reaching 10 points for the first time on Samuel Shoptaw's three at 4:08. The Blue Devils came back with baskets from Davis Byrnes and Mills, but a 7-0 streak near the end of the half gave Lowndes a 23-12 advantage at the break.

Tift made its best run in the third, chopping a 13-point Vikings' lead to five.

It back with back-to-back jumpers by Tyler Parker and a three from Henry Gebhart by the Tift cheerleaders. Aaron Williams and DarMarcus Black each made a free throw, but Parker buried a three off an assist by McKyler Horne to make it 31-26.

Lowndes called timeout to gather themselves. It worked.

Black flipped in a shot and later free throws. The Vikings began riding J.C. Riley under the hoop and the big man responded. He scored 8 points in the final two quarters.

Black's free throws were the last in the 9-0 run. At 40-26, Tift now had a much bigger hole to climb out of. Lowndes kept pushing forward in the fourth, scoring eight of the period's first 10 points.

Both coaches emptied their benches in the last half of the fourth frame. Jaden Greene, Jason Cody Morris and TeShun Bryant all had baskets.

J.J. Williams netted a game-high 12 for Lowndes, with Riley following at 10.