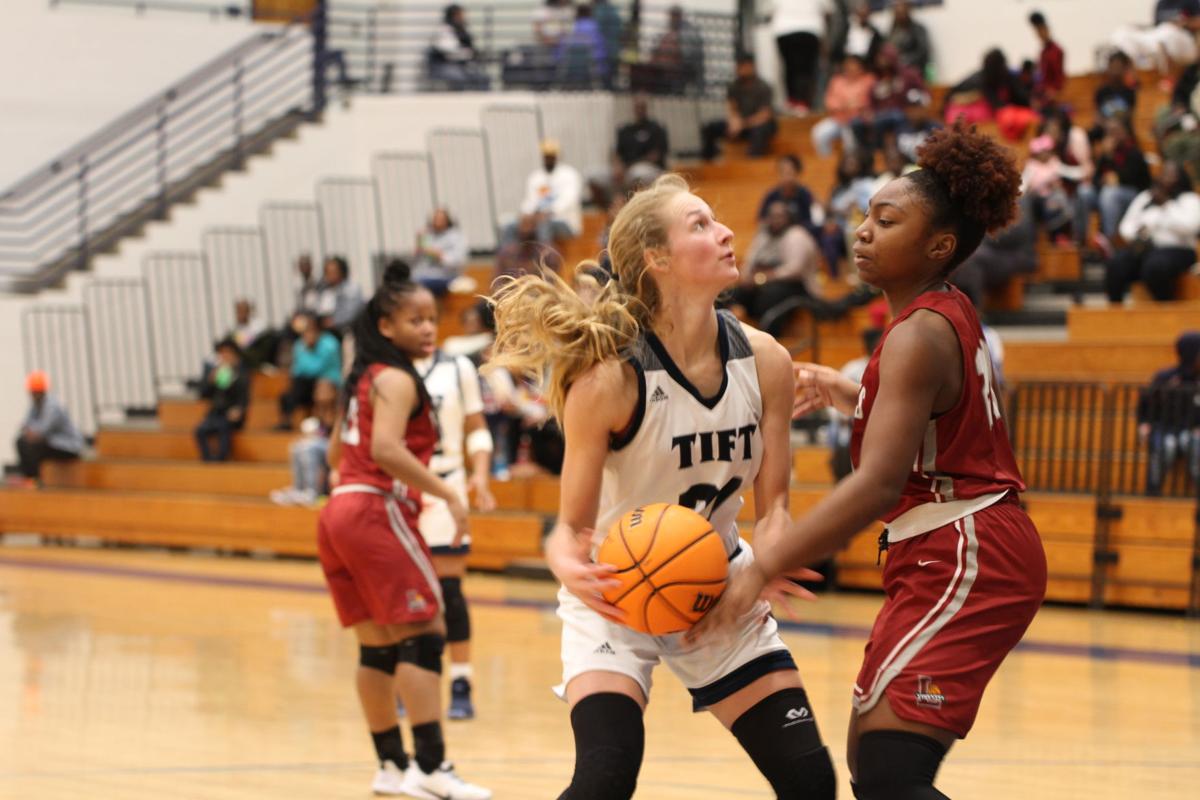 Cali Conner (left) eyes the basket before attempting a shot for Tift against Lowndes earlier this season. Tift’s region champion girls will take on Marietta to open state tonight. 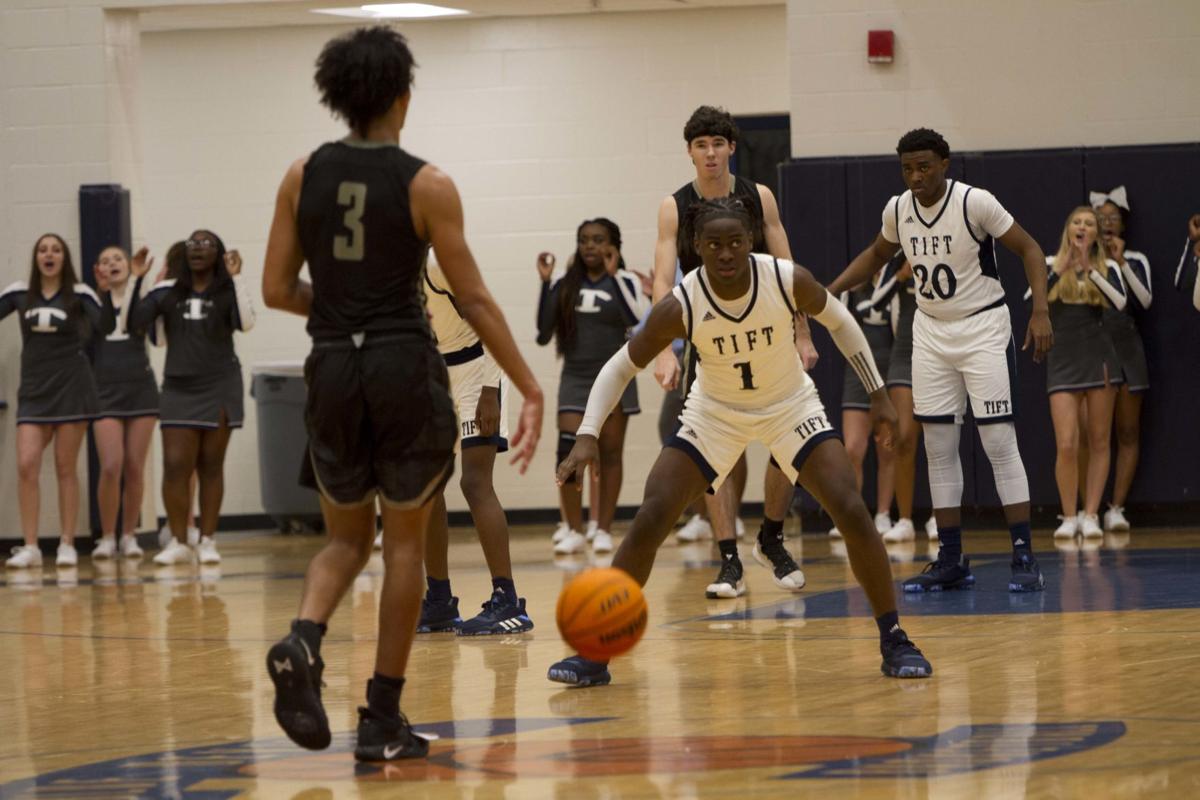 Tift’s Azaria Smith (1) defends against Colquitt, a 43-39 victory for the Blue Devils. Smith has been the second leading scorer on the team this season.

Cali Conner (left) eyes the basket before attempting a shot for Tift against Lowndes earlier this season. Tift’s region champion girls will take on Marietta to open state tonight.

Tift’s Azaria Smith (1) defends against Colquitt, a 43-39 victory for the Blue Devils. Smith has been the second leading scorer on the team this season.

The Lady Devils are home, playing Marietta at 6 p.m. The Blue Devils, however, will be on the road, headed to Acworth to take on North Cobb at 7:30 p.m., after the girls game between North Cobb and Colquitt County. Should either or both win, the next game would be next Wednesday or Thursday.

“It’s in their hands,” said Lady Devils head coach Julie Conner. Tift’s girls are the No. 1 seed from Region 1, having defeated Camden County last Saturday for the title.

The No. 1 versus No. 4 seed usually reads as a certainty in Georgia state tournaments. The powerful region champion taking on the fourth seed, the squeaker, the one that lost in the region semifinal and then in the consolation game.

“They should not be a four seed,” she said.

Marietta split games with McEachern during the regular season. They’ve played perennial powerhouses Holy Innocents’ and Wesleyan. Five of their 13 losses came in a seven-game span in December.

Lauren Walker is Marietta’s leading scorer. She’s 6’2”, but does not play offensively as a center, said Conner, who described Walker as “a slasher.” Walker has attempted the second most three-pointers on the team. On the defensive end, she “hits the boards really hard.”

Alexis Brewster is a bit closer to the traditional role of a tall player under the goal. “She’s a solid post,” said Conner, also highlighting Eva Knox as a point guard.

Marietta mostly plays a man-to-man defense with some pressing.

Conner said the result will boil down to “Whoever comes to play.” A necessity for Tift County will be at the stripe. “We have got to make our free throws,” she said. The Lady Devils have worked at their technique all week.

Tift enters the contest at 20-6 and are ranked seventh in Class AAAAAAA by the Atlanta Journal-Constitution. Nicky Jones leads the squad with 357 points and an average of 13.7 per game. Shakiria Chaney is second at 330, 12.7 per game. Still only a sophomore, Chaney’s next point will be the 550th of her career.

The second round will see the winner play either South Forsyth or Brookwood. Should be it be Tift, the game would also be at home.

This is the first time

since 2009 the Devils opened on the road. That experience worked out well for them — a 68-64 win over Stephenson — and head coach Xavier Holmes is looking for the same this time around.

Despite the difference in records and positions — North Cobb finished second in Region 3 to Tift’s third in Region 1 — they match up very evenly.

“They’re eerily close to what we do,” said Holmes. “Size-wise, they are very similar.”

Holmes described the Warriors as a four-guard lineup. Freddy Woods, Tyler Gorsuch and Justin Coleman were each named all-region. All are guards. The post player, Jared Dejesus, at 6’4” is a hair smaller than Jatarion Warren.

North Cobb went 7-3 during the regular season and defeated Kennesaw Mountain to reach the conference finals. McEachern won a 76-56 decision to send the Warriors to second place.

Tift made state by defeating Lowndes in a play-in game, but fell to Colquitt County in the semifinals. The Devils have the longest active state basketball tournament streak of any GHSA team in Georgia, having made it annually since 1994.

Holmes does have his worries. Beyond the unfamiliar first round road trip, there is the layoff. Tift has not played a game since last Friday. Since January, the games have been at a frequency of 2-3 times per week.

He’s taken the time the recommit the Devils to defense. “We’re making sure we’re sound defensively,” he said.

Offensively, Tift will be led by Warren’s average of 13 points per game. He had a high of 25 in a near upset of Valdosta in the early season. Sophomore Azaria Smith averages 9.5 per contest and has a pair of 20-point games. Torrance Galmer has come on strong lately and Jyamier Beckhom has been a consistent scorer all season long.

Should the boys move on, they will either go to Milton or host Central Gwinnett in the next round.