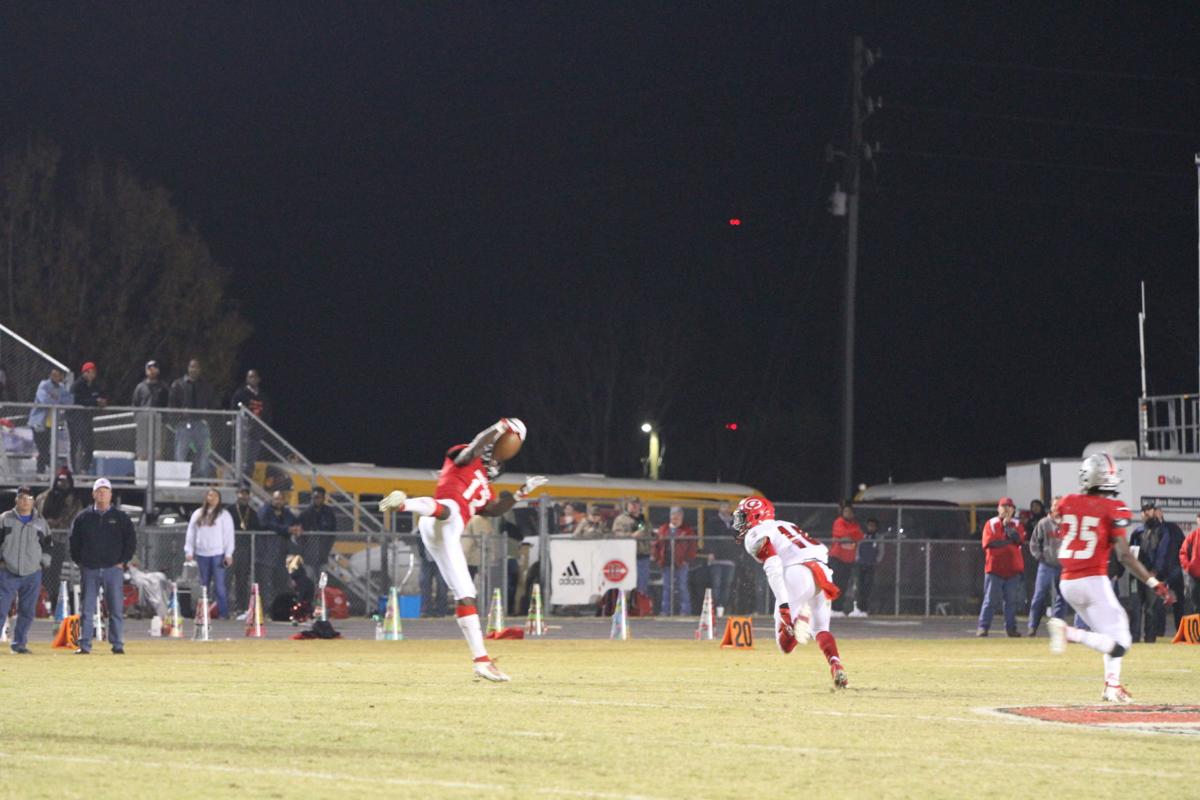 Gabriel Benyard made a sensational one-handed interception against Clinch County last week, which he returned for a 47-yard touchdown. MaxPreps named it one of their Top 10 Football Plays of the Week, a list that spans nationwide. 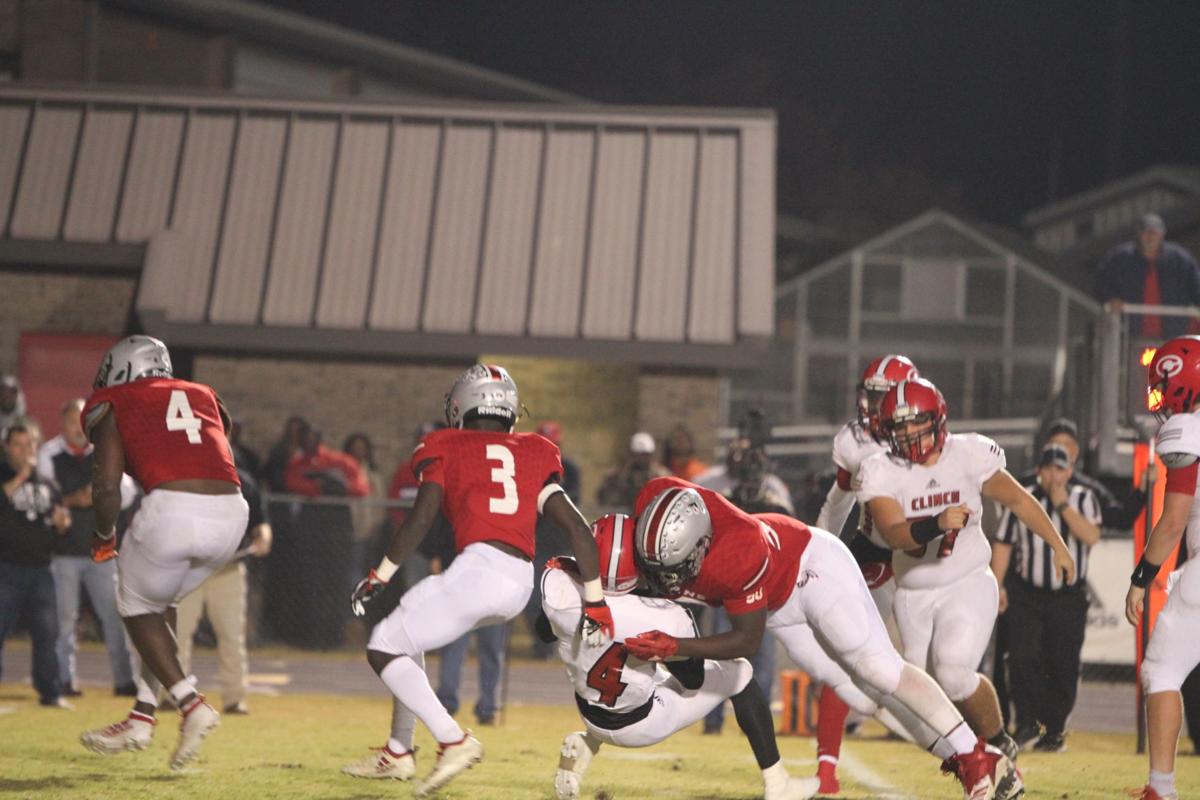 Kevon Carver of Irwin deposits Michael Walker for a loss in last week’s Class A semifinals. Irwin currently has the stingiest defense in the state, allowing a mere 4.7 points per game. They will be challenged Saturday by a passing Marion offense.

Gabriel Benyard made a sensational one-handed interception against Clinch County last week, which he returned for a 47-yard touchdown. MaxPreps named it one of their Top 10 Football Plays of the Week, a list that spans nationwide.

Kevon Carver of Irwin deposits Michael Walker for a loss in last week’s Class A semifinals. Irwin currently has the stingiest defense in the state, allowing a mere 4.7 points per game. They will be challenged Saturday by a passing Marion offense.

Their occupants will be in Atlanta. If not, they’ll be glued to screens that show it. Irwin County’s high school football team is on the cusp of magic and the only obstacle between the 12-0 Indians and a state championship are the Marion County Eagles (11-2). The two kick off for the Class A public title Saturday at 10 a.m.

The game is set to take place at Georgia State Stadium, formerly known as Turner Field. Tickets were offered for $20 in advance at the schools and they are $23 for those buying at the stadium. Parking is an additional $10. Irwin’s game, and the rest of the high school football title contests, will be broadcast live on Georgia Public Broadcasting. More information can be found at ghsa.net.

Atlanta has been a scary place for Irwin. This will be their fourth final in the Peachtree City since 2014. All four, plus another in Ocilla, have ended in defeat.

“We looking to finish the drill,” said defensive coordinator Casey Soliday, who has had a bigger role in running Irwin County’s team after head coach Buddy Nobles was diagnosed with cancer earlier this season.

The Indians may be feeling some momentum. They have already conquered one playoffs demon, eliminating Clinch County in the semifinals, 36-0, last week. Three times in recent seasons had Irwin beaten Clinch in the regular season, only to fall in the finals. Not this time around. “We overcame one obstacle,” said Soliday.

Now, here is Marion. The Eagles are unranked, but carry an 11-2 record. The latest win, last week’s semifinal, saw them surge in the fourth quarter to defeat a one-loss Pelham, 42-25.

Late surges have been Marion’s specialty. In all three previous rounds, they had to come back from a halftime deficit. The second round was a 35-27 win over rival Schley County. In the quarterfinals, they took a 28-21 victory over legendary Lincoln County.

The biggest challenge awaiting the Indians is a very different offense than what they’ve been seeing. Soliday said recent opponents have been run-oriented. Marion can do that, but spreads the ball out much more.

Quarterback Trice McCannon is listed as 5’8” and 160 pounds, which belies everything he does on offense. Stats input by the Eagles on MaxPreps credits him as completing 130 of 210 passes for 2,185 yards. He has thrown 30 touchdowns, or one in seven passes he has attempted. McCannon has been picked off six times.

When McCannon is not throwing the ball, he runs it with skill. Saturday may seem him eclipse 1,000 yards for the season; he’s sitting at 974. McCannon has run for 18 touchdowns. Soliday rates him among the best quarterbacks Irwin sees this year.

Four receivers catch the majority of McCannon’s passes. Jamil King, the largest at 6’2”, has the most yardage, 705. Brandon Thomas, their running back, has scored the most touchdowns at 10. Markevious Kelley and Johnny Walker have five touchdowns each.

“We’re going to have to steal some possessions,” said Soliday, referring to Irwin’s success with turnovers this season. Two were returned for touchdowns last week against Clinch: a 47-yard one-handed interception by Gabriel Benyard and a fumble return by Jordan Payne. Payne recorded an interception earlier in the game and D.J. Lundy landed on another fumble.

Thomas, the running back, is McCannon’s equal in running prowess. He is also on the cusp of a 1,000-yard season at 991. He and McCannon are the essentially the only two runners, as they have 80% of the team’s carries. That stands in sharp contrast to Irwin.

Four backs do the majority of the Indians’ work on the ground. Three — Lundy, Gabriel Benyard and Jamorri Colson — have more than 600 yards listed on Hudl. Lundy, injured at the start of the season, did not have to carry a heavy load until late in the regular season. He’s been on fire since. Against Manchester, Lundy gained 190 yards on seven carries, four of those going for touchdowns.

Most of Kam Ward's totes came while Lundy was sidelined. He does not have the yardage of the other three, but is effective when he does. Ward had a touchdown on 45 yards in the semifinals. Garland Benyard was a fifth running option for Irwin until his injury. And, unlike Marion, quarterback Zach Smith rarely takes off with the football. Irwin stats credit him with four rushes all season.

Smith, always hailed by Nobles as a leader, does not have the passing numbers of McCannon, either, but when he does throw he is usually very effective. Smith had a three-touchdown game against Telfair County during region play. Last week against Clinch was the first time all season he finished a game without any completions. Fortunately, Irwin only needed him to try two passes.

The abilities of both offenses will be challenged by weather conditions. The Georgia State stadium is outdoors. “Elements are going to be a factor,” Soliday said. The Weather Channel is predicting Saturday morning to have a high of 52 degrees and a low of 38. Skies will be partly cloudy and there is a 20% chance of rain. Steady rain is slated tonight.

There are two marks on Marion County’s schedule, consecutive losses to Bleckley County and Manchester. The Manchester contest was particularly unsightly at 43-14. That score would give Irwin hope, especially as the Indians did a 54-12 number on Manchester two weeks ago.

That comparison is not a simple one, said Soliday.

Marion will be matched up against an Irwin County defense that is the best in the state. The Indians allow 4.7 points per game. Savannah’s Jenkins High had an 8.1 average upon elimination by Crisp County last week. The last team in Georgia to give up fewer than five points per game was Lovejoy, which surrendered 4.87 in 2011.

This will be the first meeting between the two schools.

Marion County had a bit of a late start to football. It was a standalone high school until 1975, when it combined with Webster and Schley counties to form Tri-County High. Only then were there enough to students to hit the gridiron and a program started in 1976.

Schley County opted out of Tri-County in 2000. The Tri-County name was retained until 2006 when Webster also split. Marion retained Tri-County’s nickname of Eagles. Tri was not much of a success in football, but Marion has been. This is their 11th straight state tournament appearance and they won a championship in 2013.