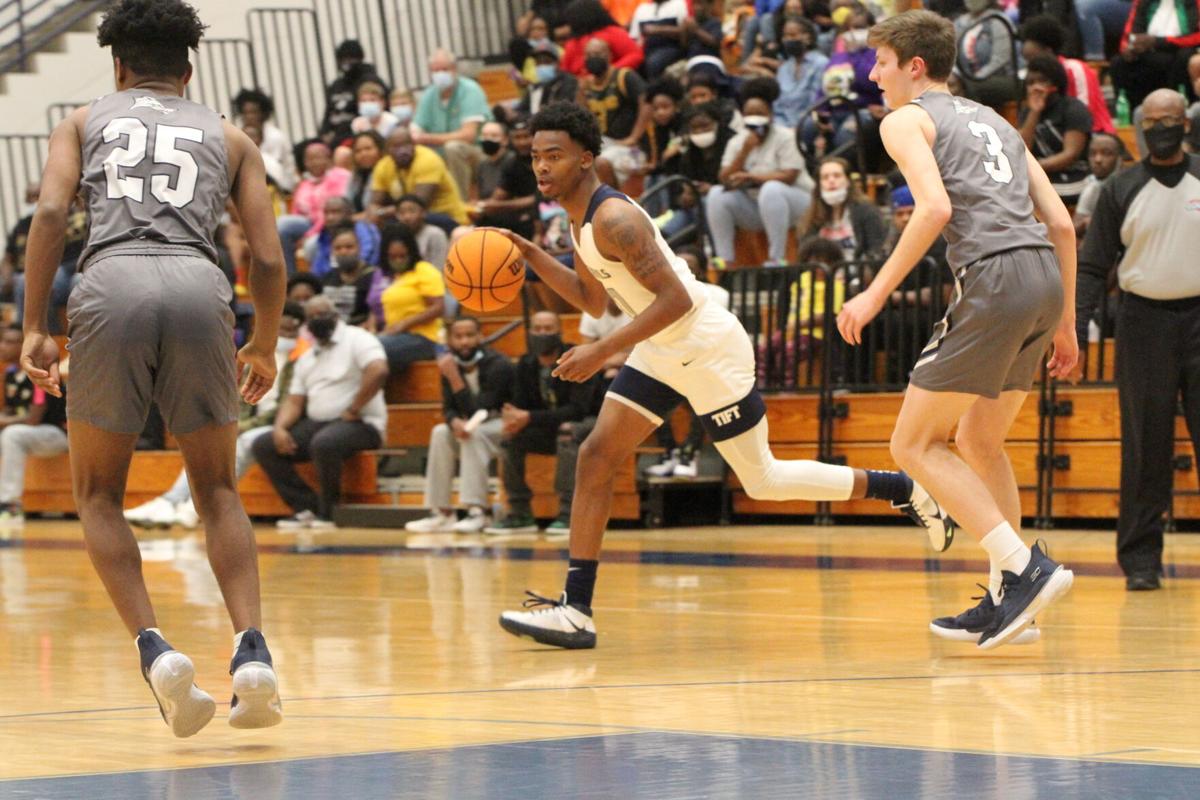 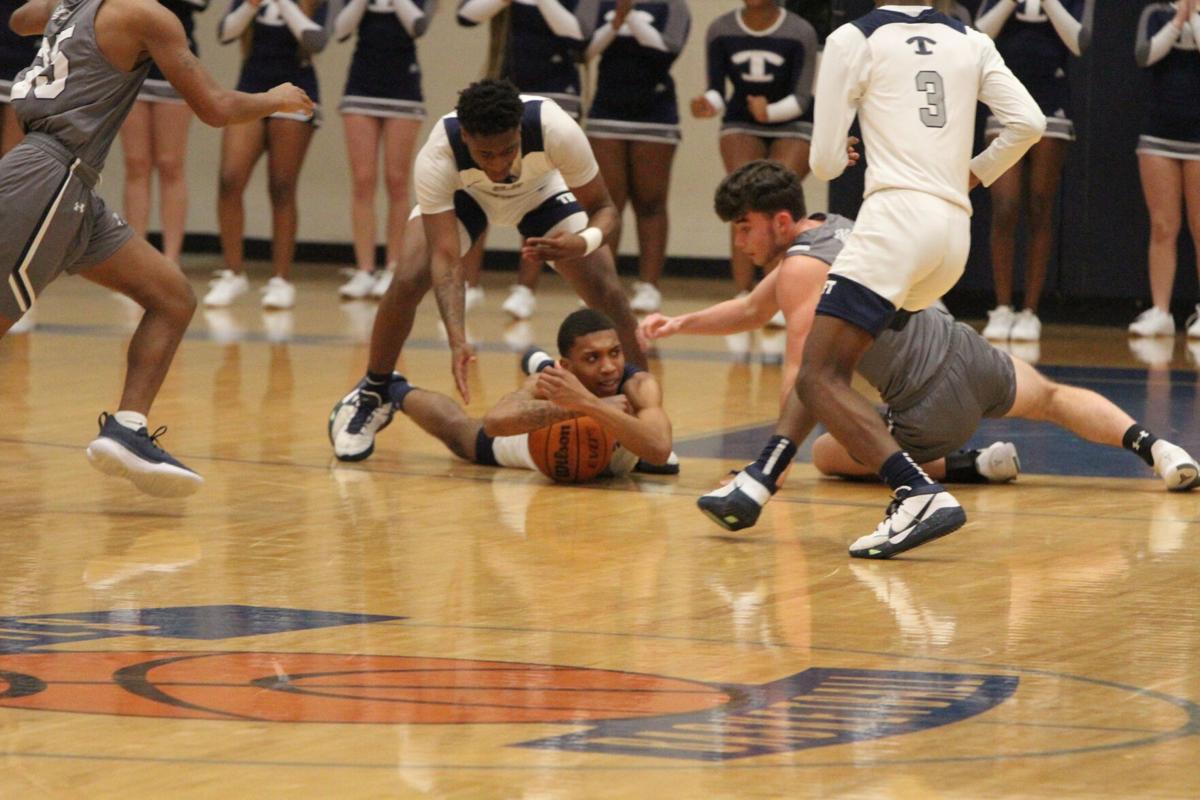 Jyamier Beckhom jumps on a North Paulding turnover he created in the first half. 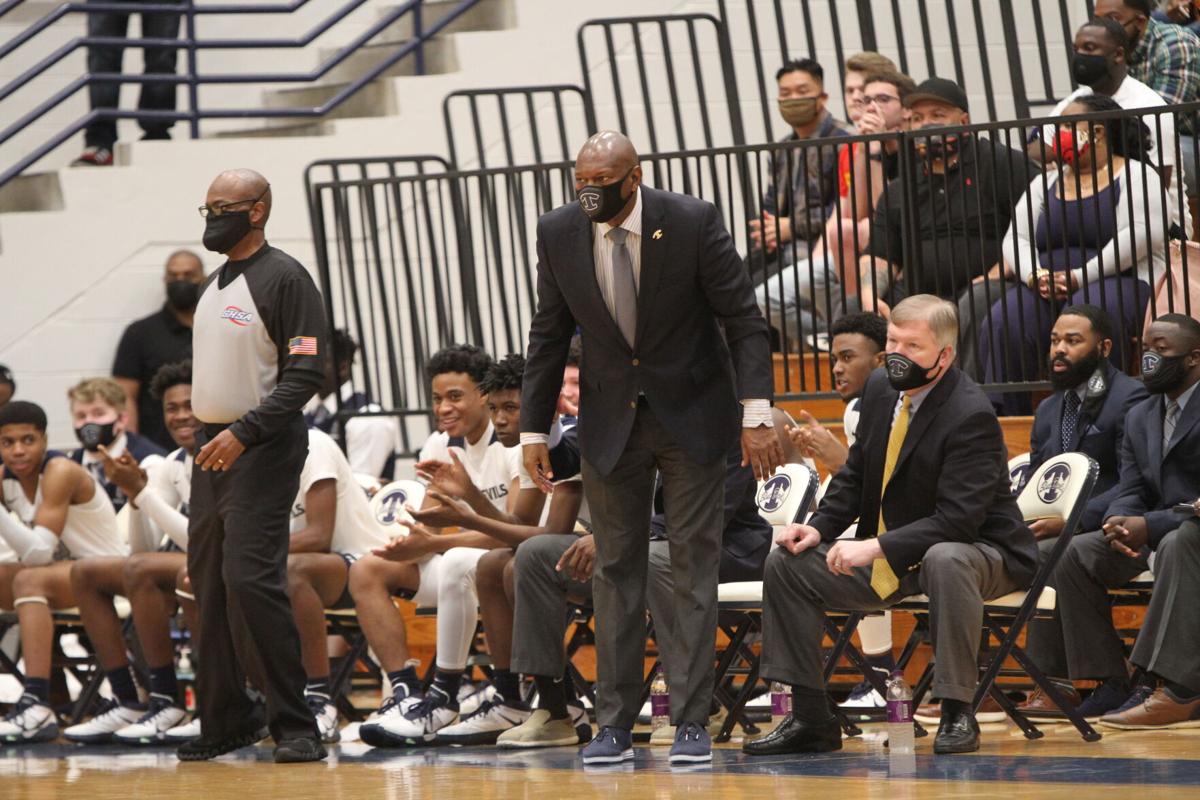 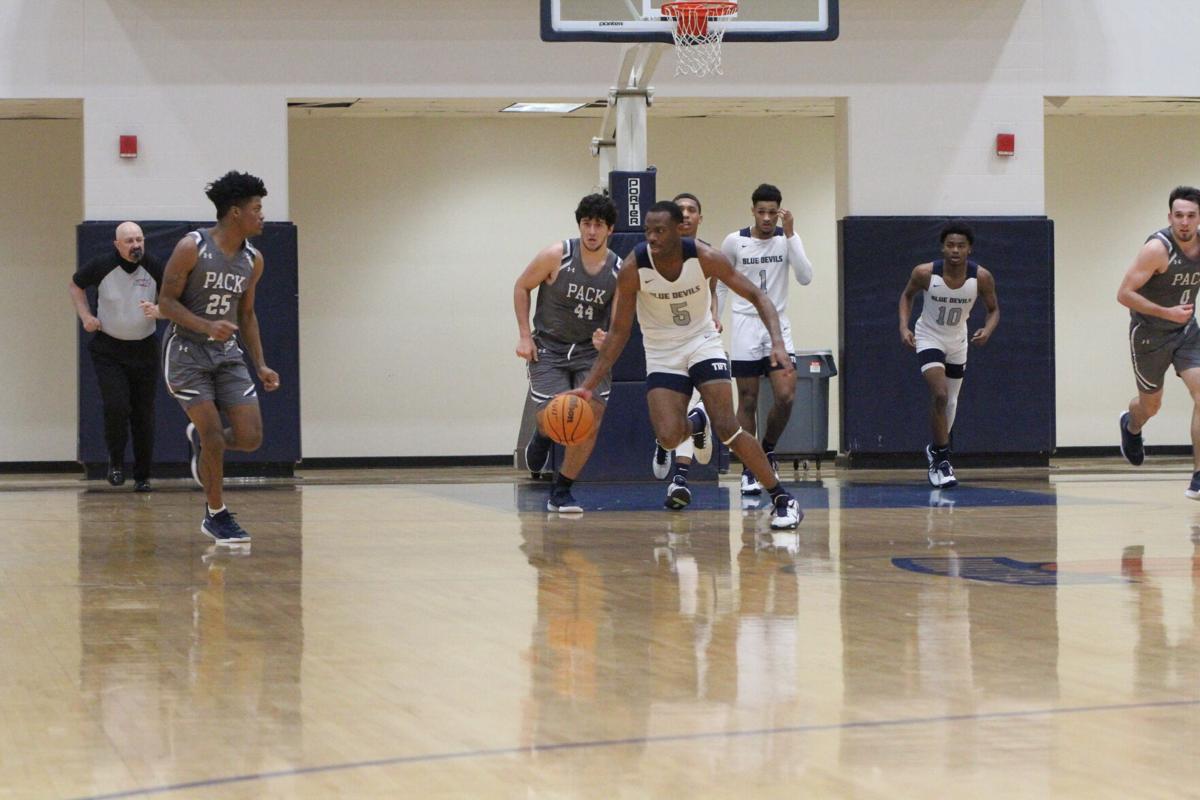 Jatarion Warren takes the ball up the court after a steal.

Jyamier Beckhom jumps on a North Paulding turnover he created in the first half.

Jatarion Warren takes the ball up the court after a steal.

TIFTON - The ball was in.

But the ball didn't stay in.

By some force of nature, the ball came back up and went back out and Tift County held on for a 45-43 victory.

The 15-5 Blue Devils, who are back in the elite eight for the first time in two years, will take on Berkmar at home Wednesday for a chance to advance to the final four.

"It was a pretty clean look," Blackshear said of Thrower's shot. "It got to bouncing around up there."

Why the basketball reversed course and spun out defies science. Blackshear had an answer, however.

"But my best friend, Coach Bateman, tipped it out for me," he said, referring to late longtime assistant coach Anthony Bateman, who died in 2019. "It told the boys he was going to tip one in or tip one out for us."

Tift has dedicated its season to Bateman.

Neither team had clear momentum until the second half.

Tift had back-to-back three-point plays to go ahead 25-20. The visiting Wolfpack responded with 10 straight points, eight by Trey Harris. They led 30-25 going into the final quarter.

Deyonte Dean got the Devils back on the right track. Thirty seconds into the fourth frame, he drove to the basket for an easy two points.

Thrower made a free throw for the Wolfpack, but Wendell McClain connected on a short jumper at 6:50. Twenty seconds later, Hezekiah Jackson posted up, making the basket and the free throw after he was fouled. Tift was back ahead, 32-31.

North Paulding got back on top on Bradley Stilwell's basket, a possession that also saw McClain pick up his fourth foul.

Warren rolled in a short basket, but was unable to connect on a free throw, opening the door for another three-point Wolfpack lead when Griffin Cherry made both of his shots from the line.

But Tift wasn't going to be denied.

Sophomore Tyler Parker, who has been huge all postseason, hit a three by the student section at 3:30. Warren then made both ends of a one-and-one for a 40-38 Tift lead.

Cherry knotted it at 40-all, then McClain fed Warren in the paint at 2:01. Cherry squared it a 42-42, then Warren landed an offensive rebound with 57 seconds left.

This time, there was no answer.

North Paulding missed a one-and-one. They got the rebound and Cherry found himself at the stripe with 38 seconds on the clock. He made the first, but missed the second. A scramble saw the ball go out of bounds, possession to Tift.

The Devils worked the clock down to 21 seconds, when Jyamier Beckhom was fouled. He made the second of two shots.

North Paulding took possession and used two timeouts to set up plays. They went to Cherry, but he couldn't get a shot to fall. Thrower picked up the rebound, but fate saw the ball rim out and the Blue Devils held on.

"They're a really, really solid team," said Blackshear of his opponents. "Their style of play bothered us. Not offensively, but their matchup zone defense that they play made us stand around and kind of frustrated us a little bit to where we couldn't quite get what we wanted."

Blackshear admitted that Warren got tired during the game. "But he sucked it up down the stretch and made a couple of big plays for us."

During the first half, Tift never led by more than two points, at 10-8 and 19-17, the latter being the halftime score. North Paulding twice had leads of three points; 5-2, courtesy of Harris and 15-12, an old-fashioned three-point play by Cherry.

Parker had the hot hand in the opening quarter, hitting three jump shots in two minutes. Tift was ahead at the end of the first, 10-8, when Warren beat the buzzer when he slammed home an offensive rebound.

There were eight lead changes or ties in the second. Every time a team scored it did one or the other. McClain's offensive rebound and score gave Tift its slim halftime advantage.

"Our objective is to have one more point that they do and we pulled that out," Blackshear said.

Behind his five three-pointers, Harris was the game's high scorer at 19 points. Cherry added 14. Only seven of North Paulding's 13 players saw action.

McKyler Horne's name only shows up in minutes for Saturday's game, but the freshman did have a big moment late in the first half.

North Paulding drove to the basket, but Horne stuck to the dribbler, stopping him near the goal and forcing a travel violation.

McClain's defense made a major difference as well, though his coach would prefer if he could keep his fouling to a minimum.