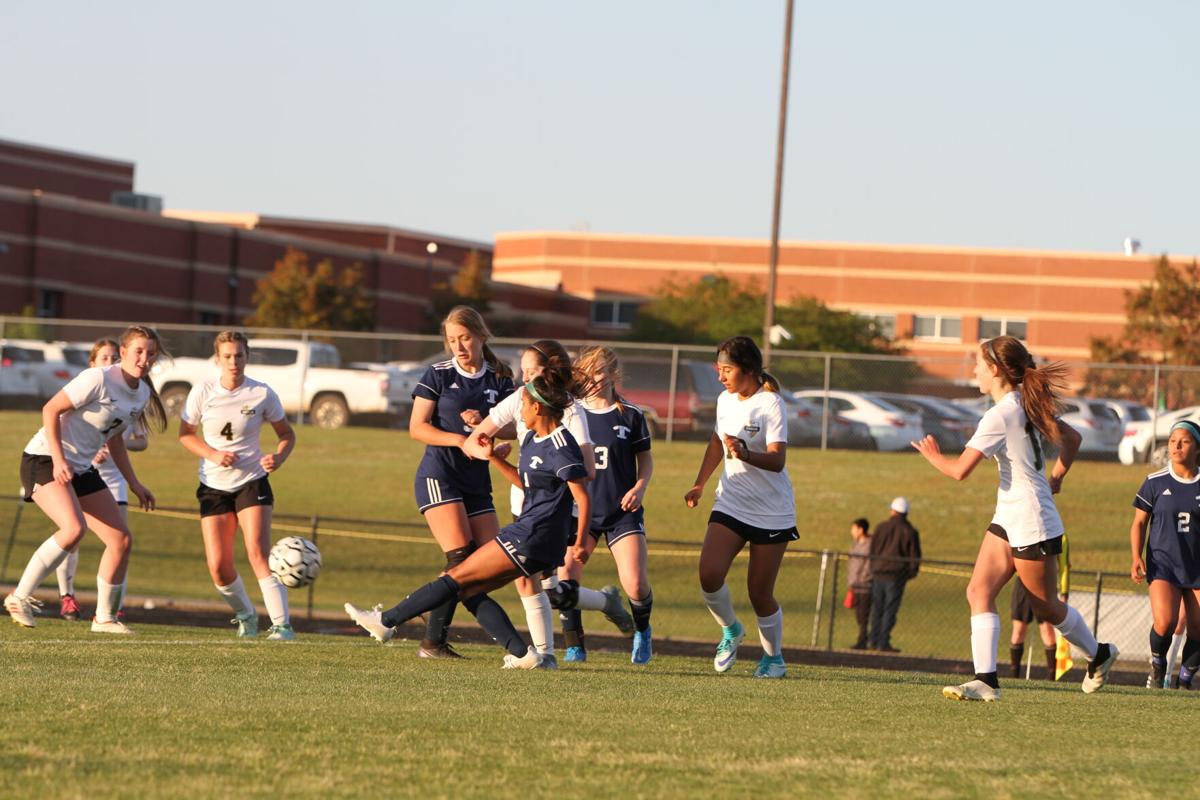 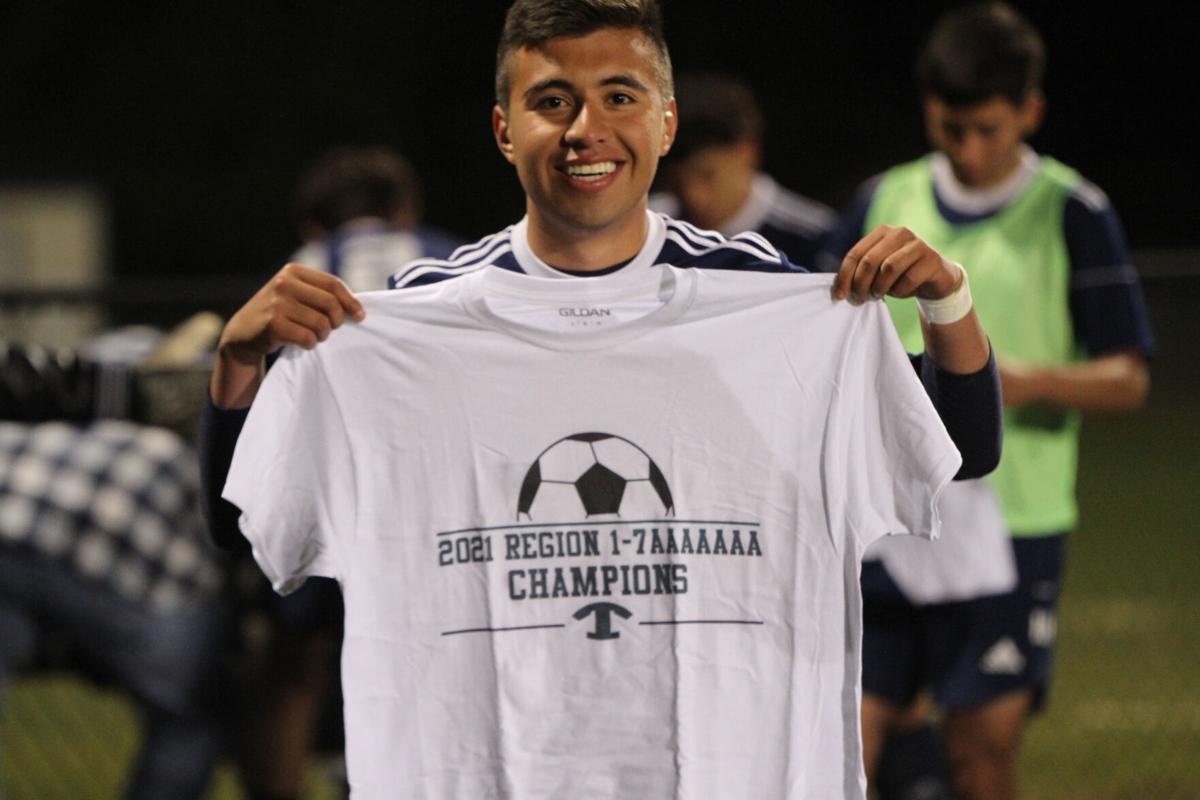 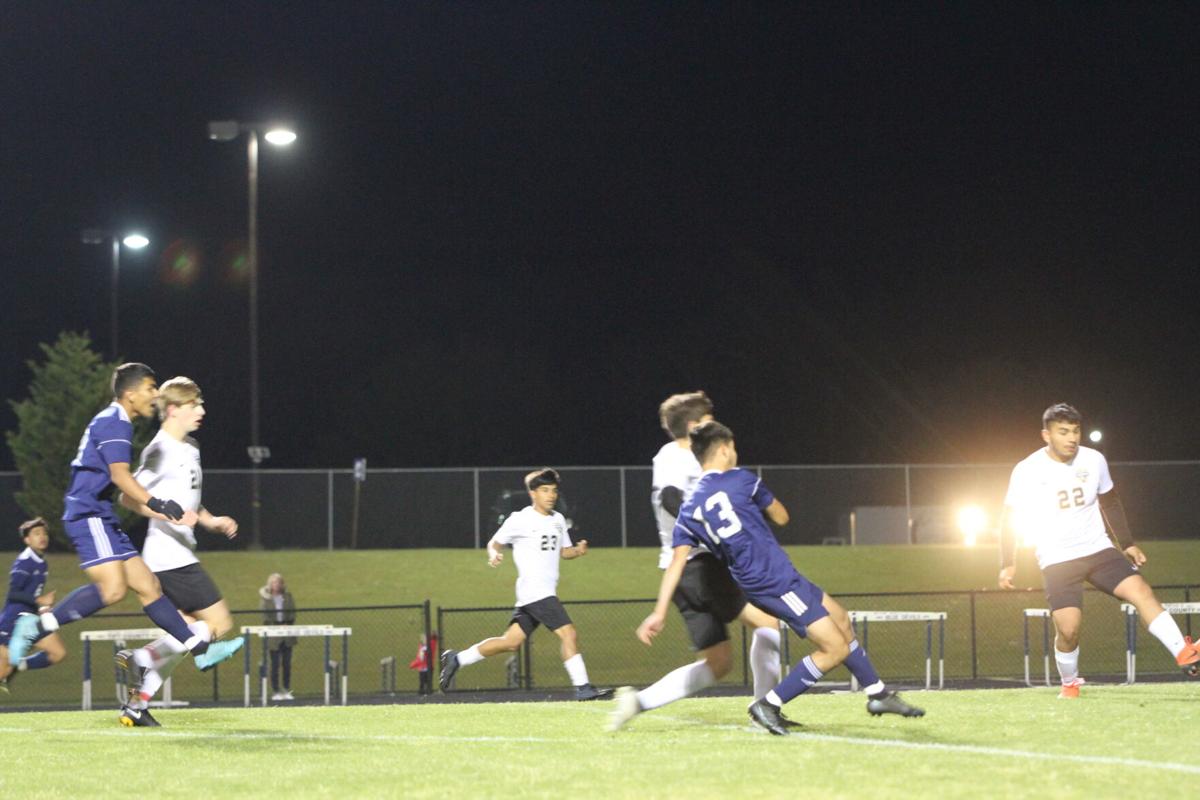 Aaron Gomez (13) fires towards the net, a shot that Cris Banda (11) knew was good as soon as it left Gomez's toe.

Aaron Gomez (13) fires towards the net, a shot that Cris Banda (11) knew was good as soon as it left Gomez's toe.

TIFTON - Tift County soccer finished the Region 1-7A portion of their schedule Friday with a double win, but it was not without an evening of nail biting.

The Lady Devils clinched third in the region by defeating Colquitt County, 2-0. The Blue Devils won by the skin of their teeth, 3-2.

Colquitt became the first and only Region 1-7A team to score on Tift this year. Nearly 34 minutes into the opening period, the Packers slammed in a goal to tie the game at 1-1.

That's not all Colquitt did. The visitors from Moultrie almost pulled off the upset. A free kick at 22:34 gave them a 2-1 lead and, seemingly with it, ended the Devils' chances to go 6-0 in the conference.

As usual, the match was a chippy one between these rivals. Head coach Bobby Earls said nothing was quite right about the game. His team was off and Earls admitted he was off as well.

Down and dismayed, but the home bench was not disheartened. A cry from the sidelines reminded them they still had 20 minutes to play. The rally had begun.

Cris Banda was wide right on a shot three minutes after the Pack's second goal. Banda almost had Elian Calderon alone, but Calderon was whistled offsides.

The heat stayed on.

Colquitt was now on its heels.

Gomez had another shot. Two hard shots were saved within 15 seconds of each other. Gomez, playing his most significant minutes of the season, had a chance at a free kick. It sailed a bit high.

Colquitt got the ball into Tift territory, but it wound up in possession of Jonathan Salazar. With most players from both sides in the area for a potential attack, Salazar had plenty of room on Tift's offensive end.

Salazar saw one of his own men available and he sent a pass deep. Manny Marin, the deep man, sprinted towards the sideline, past a lone defender and chased down Salazar's offering.

The only man to beat was the keeper and Marin popped the ball into the back of the net at 7:17. Tift was in the lead.

The Devils weren't done playing aggressive. Marin bought valuable time when he cornered it after free kicks. Paco Ventura held on as long as he could fielding anything that bounced in his direction. Colquitt only managed one solid attempt on goal in the final seven minutes.

After the final seconds ticked off the clock and the horn sounded, Queen's "We Are the Champions" was cued up over the speakers and the team unboxed their region champion T-shirts.

It took almost 30 minutes into the first half for the Blue Devils to produce their first goal. At 10:47 Banda scored on a rebound after Salazar's shot was saved.

Tift's Lady Devils picked up their third win and second shutout of the year over Colquitt.

The locals had a goal in each half. Kloie Varnadoe deposited the first at 22:33, the play set on a throw in to the middle of the box. From there, Varnadoe did the rest, hitting the upper left corner of the net.

Later in the half, Amber Anderson saw a shot on a breakaway sail a bit wide. Colquitt also had to bear down to block an Anderson attempt after a nice pass from Abby Goddard.

Laura Kate Wright had a shot wide just before intermission.

Tift clung to its solitary goal for some time. Morgen Ray had a trio of saves in the first half, then fended off a brief flurry to start the second.

The Lady Devils bore down again. Anderson, Goddard and Varnadoe kept the keeper busy. Goddard almost connected on a header at 28:15. Anderson had a steal stopped at the last moment.

Tift racked up corner kicks. All were denied, save for one lucky break.

Looking for a goal kick, a slow rolling pass to the keeper nearly went awry. It was left of the net, a good break for Colquitt, but couldn't be corraled in-bounds, a very bad break.

That gave the Lady Devils another corner kick, which landed square in front of the net and with enough room for Gigi Elizalde to unload a clean shot.

Tift ran out the rest of the clock with little pressure.

Head coach Zac Martin confirmed the third place finish after the game. Based on Eurosport's online standings, Tift will likely be headed to Brookwood or Parkview in the first round of state, pending result of an April 14 match between the two.

Between Friday's games, Tift held a special ceremony: Senior Night for the Class of 2020. The teams had not been able to honor those players a year ago because of coronavirus ending the season early.