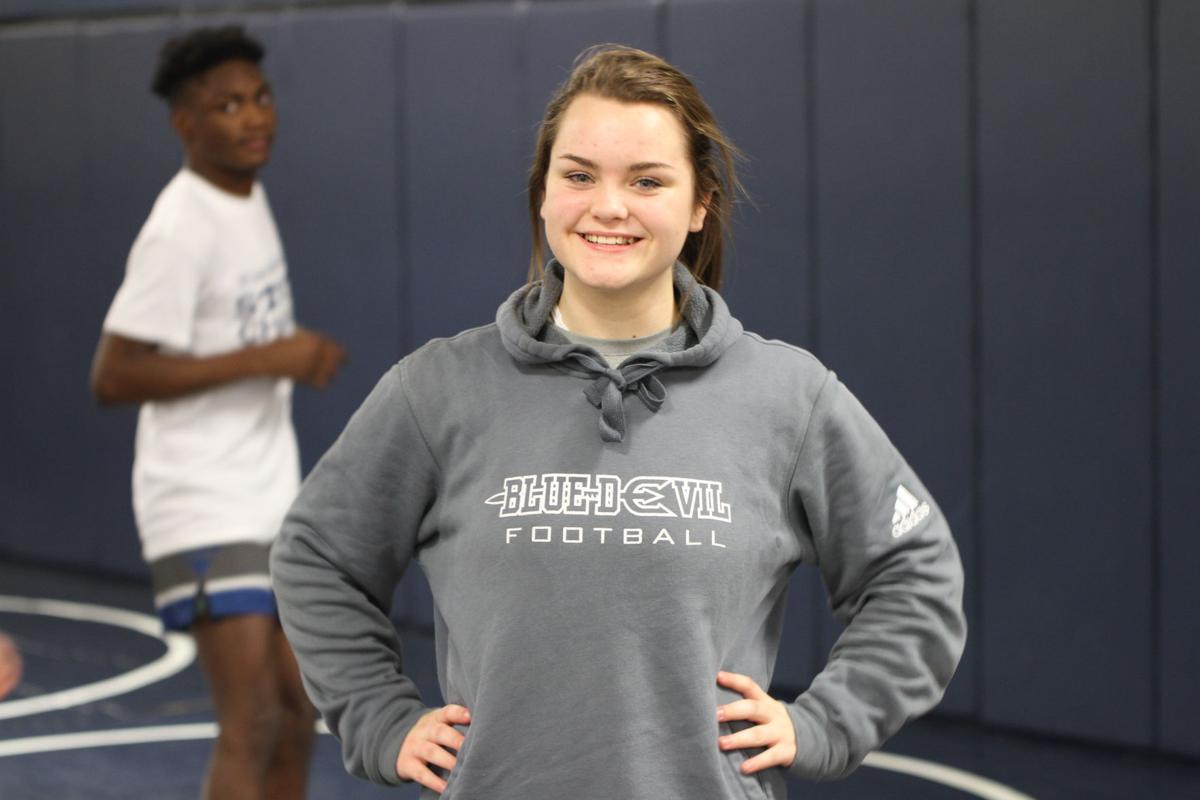 Madison Cox has her sights set on the GHSA state girls wrestling tournament. She attempts to qualify at sectionals today. 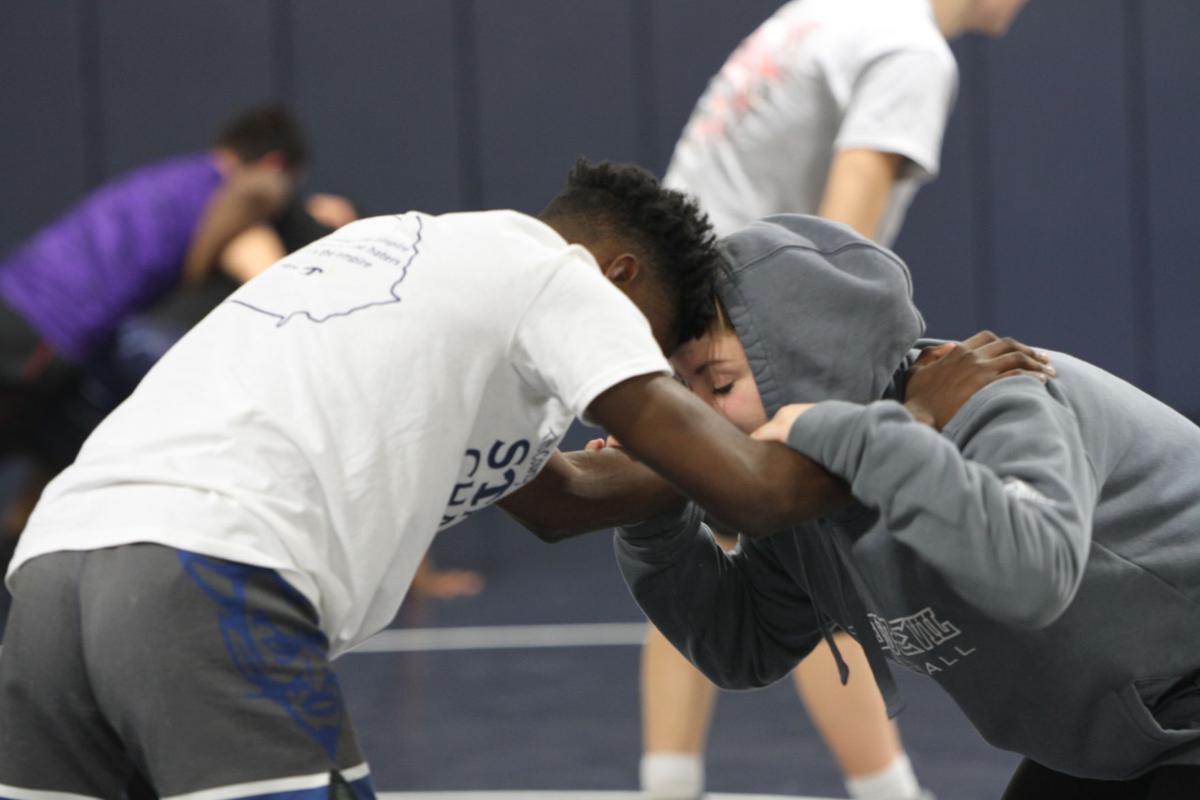 Madison Cox (right) and a Tift County teammate engage in a collar-and-elbow tie-up during a team practice Monday.

Madison Cox has her sights set on the GHSA state girls wrestling tournament. She attempts to qualify at sectionals today.

Madison Cox (right) and a Tift County teammate engage in a collar-and-elbow tie-up during a team practice Monday.

TIFTON — Amateur wrestling is one of the oldest sports to exist. Mongolian cave art from c. 7000 B.C. shows wrestling. It is depicted on Egyptian tombs and was popular among ancient Greeks. Wrestling was one of a small handful of sports at the first modern Olympic Games in 1896.

For nearly all of this history, amateur wrestling has been a strongly male sport, perhaps the epitome of masculinity: two men putting nothing but strength and wits on the line in a battle of superiority.

And now, that is beginning to change. Starting today at Perry, a Tift County wrestler is out to make history. Freshman Madison Cox can become the first ever female wrestler from Tift to make a high school state tournament.

Life has come at Cox quickly.

“It’s crazy,” said Cox. “It’s been a wild ride, but it’s been fun. It’s been really enjoyable. It’s been an unforgettable season, that’s for sure.”

Women’s wrestling is still a bit of a phenomenon in this area, but across the state and America, it is rapidly growing.

The Georgia High School Association acknowledged that growth last year by holding its first ever girls state championships. This came a year after the first ever female placed in a traditional state tournament.

Championships have been even more of a boon to wrestling in the state. The GHSA releases annual reports on athletic participation. In 2017-18, the league reported 239 girls in wrestling at 115 schools. In 2018-19 that rose to 427 at 167 schools.

That’s a far cry from 2011-12, the earliest available on the GHSA website. In that school year, there were a mere 130 girls wrestling at 60 schools.

Cox herself wasn’t even a wrestler until last season, when as an eighth grader she was recruited to the middle school team by coaches Zac Martin and Billy King. At first, Cox wasn’t sure if this was the sport for her, but that soon changed. After a couple of days of practice, her reaction was, “Wow. Hey, I really like this.”

She believes Martin and King approached her because of the growing opportunities for girls in the sport. “They wanted to get more girls out there to try it,” Cox said. Both coaches have worked extensively with female athletes. In addition to wrestling, Martin is the head coach of the Lady Devils varsity soccer high school team. King also works with middle school track.

Cox admits her knowledge about wrestling was a bit limited when she began.

“I knew nothing,” she said. “Absolutely nothing.” The first two weeks were a major learning experience. “It’s weird to look at where I started and where I’m at now. Like, it’s such a dramatic change.”

Cox did well in eighth grade, but said it was an adjustment to high school, not just with the wrestling, but also the weight classes.

“Every weekend I could, I was on the mat,” she said. Only once, though, was it against another female, a wrestler at Bainbridge High.

Cox said she is excited to face other girls at sectionals. “I think it’s going to be fun,” she said, “to see what I really have to work on next year because it is my freshman year.”

“Everything is always an opportunity to grow and get better,” she said.

Brackets have not been released yet for the tournament. Watson expected brackets to be released Thursday.

Cox enjoys being part of the team. She is the only female on the high school squad, but the boys have been welcoming. “The support is crazy that I get from

everybody,” she said. “No matter if I lose a match or if I win, I’m still going to have them in my corner no matter what.”

Watson complimented Cox’s work ethic, as well as the camaraderie she has with the male wrestlers on the team. “She’s worked hard. She fits in with the guys. They take her, they accept her.”

She has gotten comments from male wrestlers from other teams, but said they have been complimentary. They have also offered tips to improve her skills. No one has said anything negative, said Cox.

The match against the Bainbridge wrestler might be her favorite so far. She exclaimed to Watson afterwards, “I beat a girl!”

“She was glowing,” Watson said. “Smiled from ear to ear.”

Watson said it’s been a learning experience for him, too. He’s coached female wrestlers in the past, at Henry County. “Never where it’s been sanctioned,” he said. A few girls have wrestled at Tift County, but he said none have had the commitment of Cox. Even more might join the his program soon. Cox said there are three wrestling at Eighth Street Middle this year.

“It’s starting to be a bigger sport for the girls,” said Watson. “I’m excited for her, just for an opportunity to have that some girls don’t get.” He encourages Cox to keep her head up. Another aspect of the continued acceptance of women in wrestling are guys getting on the mat to wrestle them. Even as recently as last year, a wrestler in a state tournament in Colorado forfeited twice rather than face a female.

“There’s been a couple of times she’s been roughed up a little bit,” he said. Watson thinks wrestling males will give her a boost when she’s facing females, knowing she can hold her own with them. “I hope everything goes well for her,” he said.

Cox thinks it’s cool that she is a potential pioneer.

“I think it gives more girls an opportunity to say, ‘Hey, well she did it. I think I could.’”