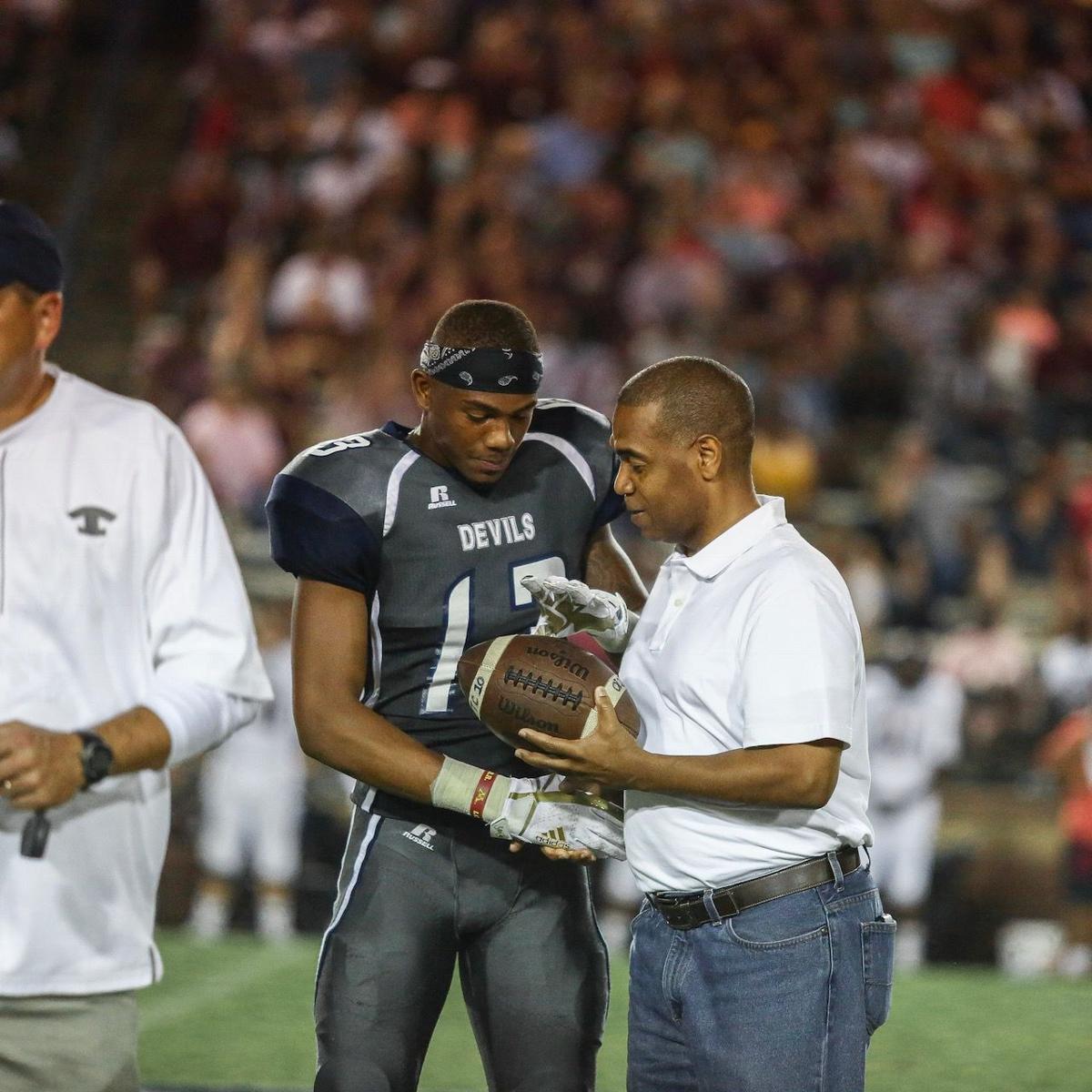 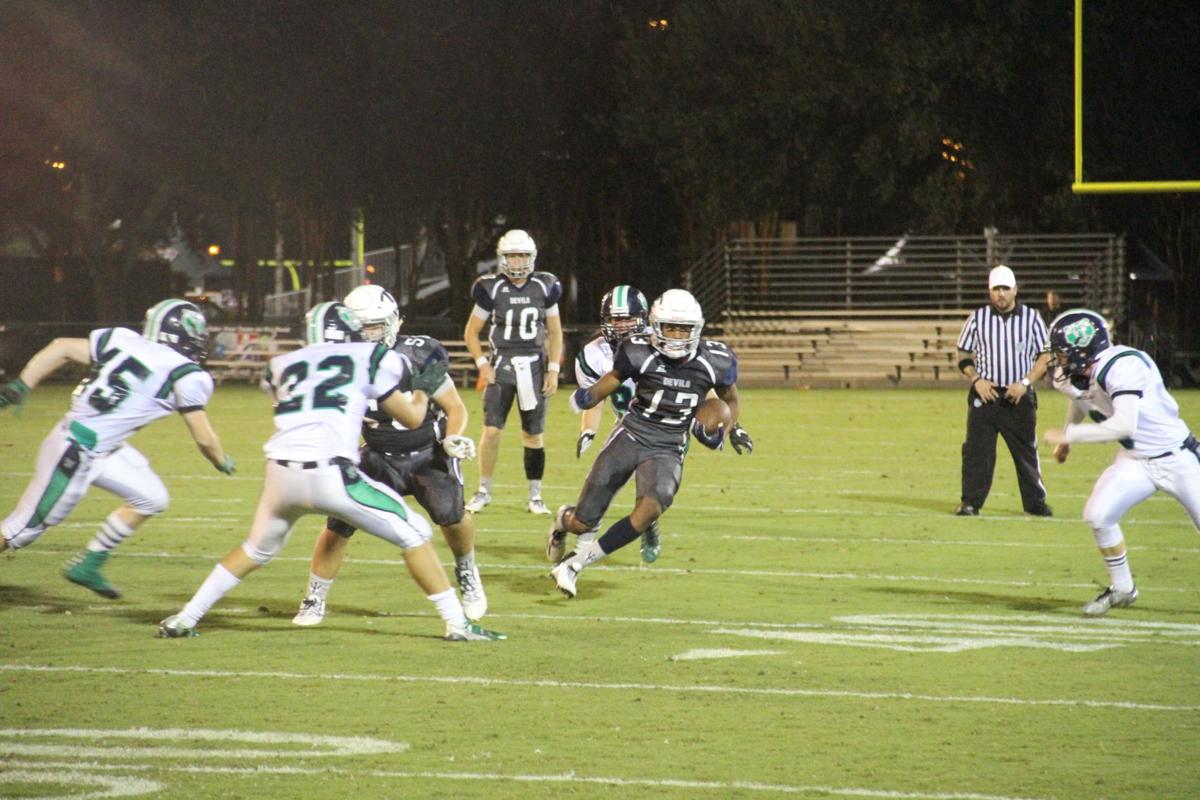 Tift County’s Rashod Bateman (13) finds a crease after a pass from Griffin Collier (10) against ThunderRidge during a 2016 game. 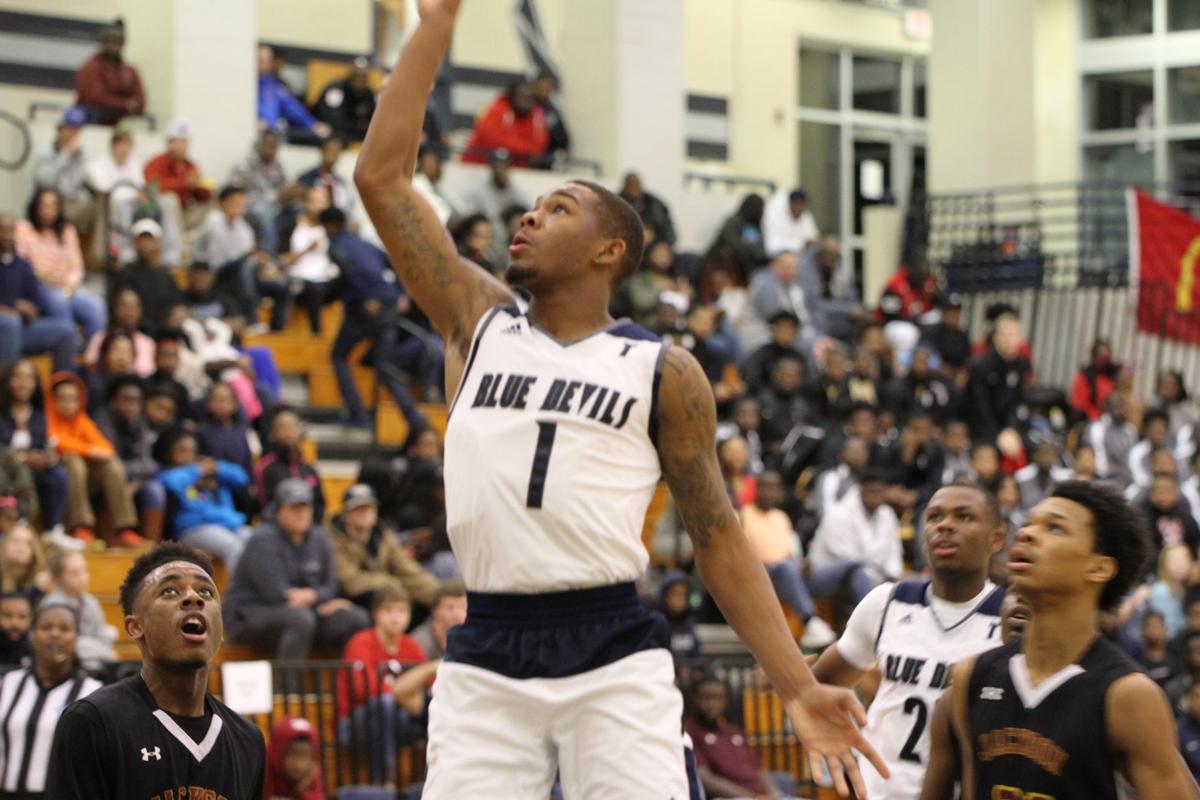 Rashod Bateman drops in a lay-up for Tift County in December 2017. 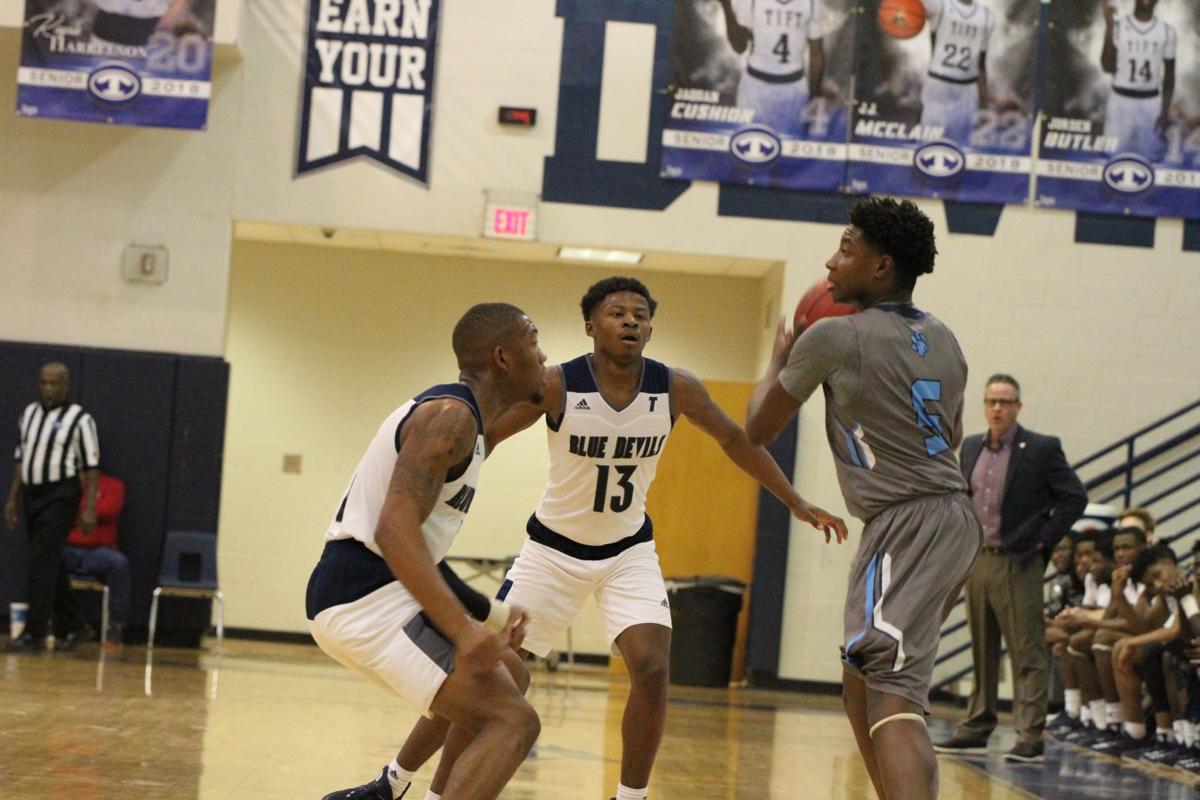 Rashod Bateman (left) and Marquavious Johnson trap a Camden County player in January 2018. Defense has been a major asset for the Blue Devils and a big reason for their region championship last Saturday

Tift County’s Rashod Bateman (13) finds a crease after a pass from Griffin Collier (10) against ThunderRidge during a 2016 game.

Rashod Bateman drops in a lay-up for Tift County in December 2017.

Rashod Bateman (left) and Marquavious Johnson trap a Camden County player in January 2018. Defense has been a major asset for the Blue Devils and a big reason for their region championship last Saturday

TIFTON — Rashod Bateman's selection by the Baltimore Ravens in the first round of last Thursday's NFL Draft drew many congratulations from Tift County and area football fans.

The Draft audience is a large one every year, but the potential of seeing a local player selected drew even more eyes, even if they had to wait until nearly midnight to hear Bateman's name called at No. 27.

Chris Wade, who coached Bateman in basketball at Tift and was his head coach in 2017-18, stayed up past his usual bedtime. "I just wanted to see the moment," he said.

“As a coach, you don’t get that opportunity [very often] … there are a lot of folks who don’t ever have the opportunity to see one of their former players be a first round draft pick,” said Ashley Anders, former Tift County High head football coach who was in charge during Bateman’s two biggest seasons.

“Rashod’s always been a great kid,” said Anders, quickly qualifying that Bateman has aged out of being a kid. “He always worked extremely hard, you get that out of a lot of kids.”

Not just Tift County is thrilled to see him selected.

South Georgia had long had the mentality of being its own separate entity and a fierce rival of Atlanta. During the playoffs, many schools and fans will cheer for teams they detest during the regular season, with the reason being geography.

The talent of Bateman at Minnesota was immediately evident. Getting there was not.

Anders said he began to realize there was something special as Bateman went into his junior season.

As a sophomore, Bateman had scored three touchdowns, two on passes by Griffin Collier in a mid-year blowout of non-region opponent Alcovy. The third was the final score in a not-so-pretty loss to Lowndes. Anders admitted Bateman was more of a “depth guy” than one earning major playing. “We had some pretty good receivers that had more experience.”

An injury to receiver Quay Duggins increased Bateman’s time, earning him valuable minutes. Anders thinks that time made him even hungrier for more.

“His junior year, he started separating himself,” Anders said. “You could definitely see something special about him. The effort that he put in in the offseason in the weight room. You could tell he was going to do good things.”

Those “good things” saw Bateman finish the year with a team-leading 825 yards and 56 receptions, with season highs of 147 yards against South Effingham and nine catches against Parkview.

Arguably, the real revelation was on the basketball court. Bateman was fourth on the team in scoring (212 points) and came alive during the state tournament, with 19 points against Newton and 16 points against Norcross in the final being a major reason Tift won the Class 7A championship.

“That was a pretty good basketball class,” said Wade. “At that time, he was more of a football guy, but several people would come to me and (then head coach Dr. Eric) Holland and say ‘He’s the best basketball player in his class.’ From a very young age, he was projected to be something special.”

Wade also said he noticed Bateman maturing his junior year and training even harder. That work, said Wade, pushed Bateman over the top. “It was pretty apparent he was on his way.”

Preston Horne was the Devils’ leading scorer during the 2016-17 season and signed to play with Virginia Tech. Wade isn’t sure Tift would have raised the trophy without Bateman.

“It would have been tough,” said Wade, adding that Bateman was probably the team’s best offensive weapon during the tournament.

Wade said he was proud to be a “small part” of Bateman’s success.

Some athletes are predicted for greatness from the start.

LeBron James appeared on the cover of Sports Illustrated when he was a high school junior. Owen Pappoe, a linebacker at Auburn, was offered a scholarship by Michigan when he was in eighth grade. Dylan Lonergan, the Brookwood pitcher Tift saw in the state playoffs, reportedly has offers from 20 major Division I schools as a quarterback. He is a sophomore. Similarly, Tiftarea Academy’s Hayden Murphy committed to play baseball for Auburn University as a sophomore.

Bateman was not one of these athletes.

Georgia Southern was the first school to offer him a football scholarship and Bateman initially committed there.

The Eagles have been a landing spot for several Tift County football players and have a long history of success, with multiple national championships. “A great offer,” said Anders. However, very little of that has been on the backs of wide receivers. In his first two years at Minnesota, Bateman’s total receiving yards were more than what any Georgia Southern player has ever achieved in four.

After the 2017 basketball championship, he did get at least two offers in that sport from Division I schools. Wade recalls Penn State and Texas A&M being interested. It took longer for football to come around.

Exposure can sometimes be limited to being regional for players in this section of the state and Anders decided to reach out to one of his contacts, Maurice Linguist, who coached defensive backs at Minnesota. Anders and Linguist have known each other for years and coached together at Valdosta State.

“With him being at Valdosta State, he knew what football was about in South Georgia,” said Anders. He told Linguist he had a player who might be pretty special. Linguist came down to have a look.

An April 26, 2021 profile on Bateman in “The Ringer” said Linguist immediately called Minnesota head coach P.J. Fleck with the reaction, “We found one.”

Fleck made Bateman an offer. In June 2017, he decided to become a Golden Gopher.

That ended up being quite fortunate for Fleck. By mid-September, Bateman was turning heads nationally with a Tift record 248 yards against metro Atlanta power Parkview at the Big Orange Jungle. Three scores gave Bateman nine touchdowns in his first five games.

Now, Bateman was rapidly becoming a very popular man. He finished the year with 1,539 yards and 21 touchdowns, both Blue Devils records. In December 2017 alone, 247 Sports reported that four Southeastern Conference teams made him offers. That included Georgia and Kirby Smart personally made a visit.

“They (other colleges) noticed a little too late,” said Anders. Staying with Minnesota “says a lot for his character.”

Amidst all the hubbub of new offers, visits and All-Star games, Wade said he told Bateman that if he wanted to concentrate on football, he would not be offended if his top returnee did not return.

“He was contemplating not playing. He and I met and I was fine with it. Whatever decision he made — we didn’t try to pressure him to play — I basically told him, ‘Rashod, you do what you think is best for you. We’d love to have you, but if you think it’s better that you concentrate on football, don’t want to risk injuries, whatever the case may be, we support that, too.’”

Bateman gave what he could to basketball as well. Despite missing 11 of 26 games, he was third in scoring. Wade said he appreciated Bateman’s efforts.

Anders said Bateman’s work ethic helped him get into the position he is now.

“Rashod’s extremely intelligent,” he said. “He knew he couldn’t get there on talent alone.”

Upon arriving in Minneapolis, Bateman set freshman records for receptions and yardage, then broke the sophomore marks. He was the Big Ten’s Richter-Howard Receiver of the Year in 2019, third team Associated Press All-American, a Biletnikoff Award finalist and Minnesota’s Most Valuable Player, the Bronko Nagurski Award.

Bateman’s case for being a top draft pick grew louder during the 2020 Draft when longtime ESPN draft guru Mel Kiper started naming some of his favorites. The conversation was about quarterbacks, but Kiper broke in to say “I like Rashod Bateman.”

Bateman was named Preseason All-America, but saw 2020 limited. He caught COVID-19 during the summer and initially opted out of the college season. In late September, Bateman opted back in and had 472 yards and two touchdowns before opting out again in November.

Even though other receivers developed during the year into valuable picks, Bateman’s talent and dedication ensured he was still highly valued.

Anders has watched Bateman mature into the football player he is now. Just as big has been watching him mature as a person.

“You develop football players, you develop kids on the field, but when you help kids become men it’s very fulfilling,” he said. “Any coach will tell you that. When you see players go on to be good people, good husbands and good fathers that’s part of the job also.”