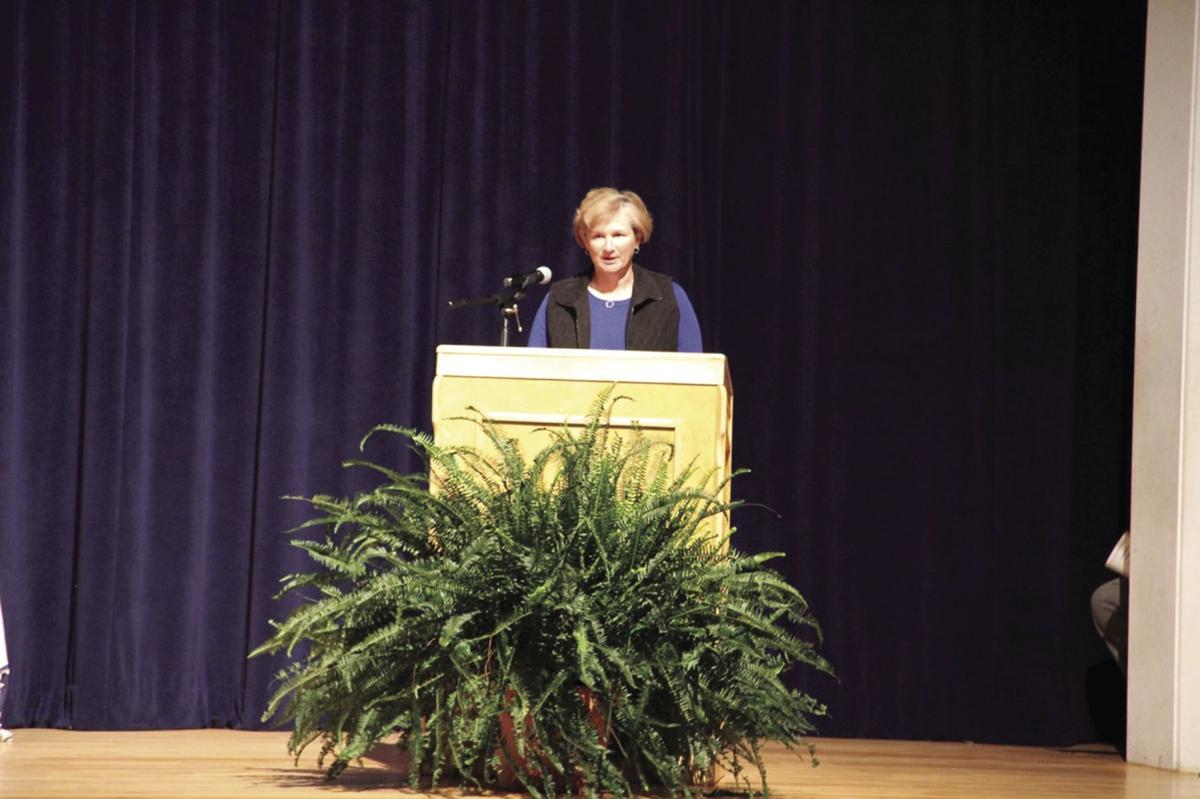 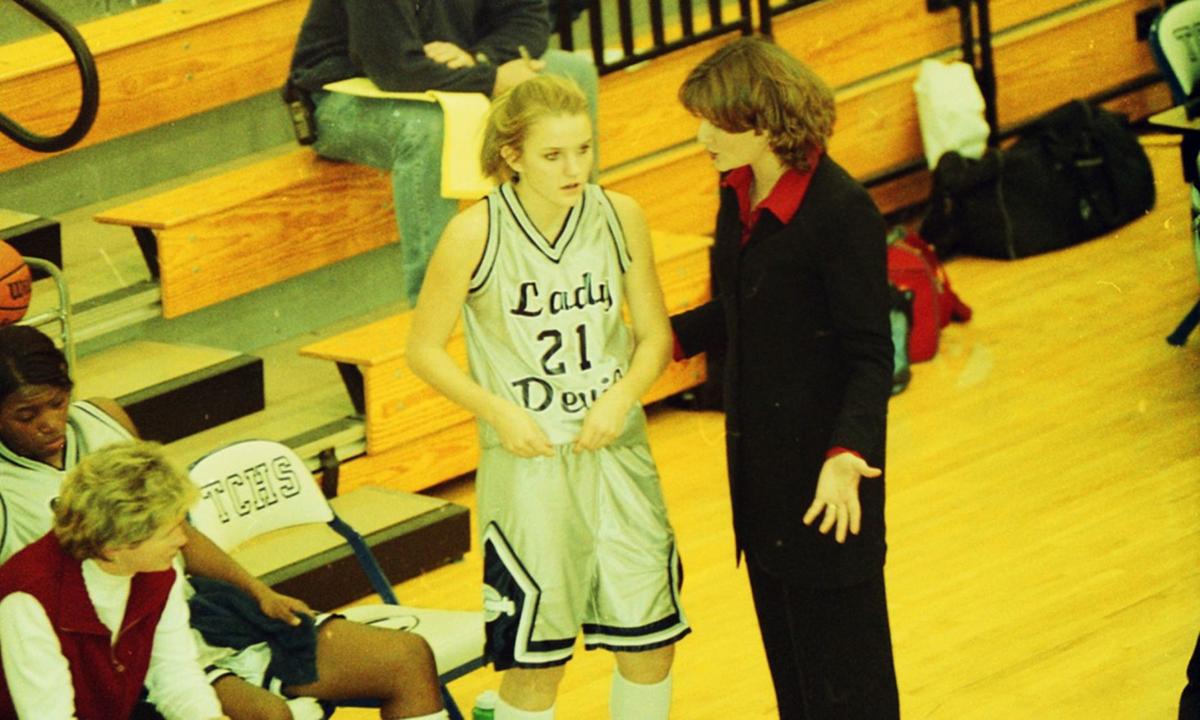 Ivey Vickers (left) assists the Lady Devils on the basketball court in 2002-03. The team was head coached by Michelle Caldwell (right), who is speaking to Shelley Baxter.

Ivey Vickers (left) assists the Lady Devils on the basketball court in 2002-03. The team was head coached by Michelle Caldwell (right), who is speaking to Shelley Baxter.

She was there for state softball titles and for the turnaround of the Lady Devils basketball program. Vickers earned a basketball scholarship to Valdosta State, playing for Charles Cooper and acting as an assistant to Jane Williamson. From there, she moved on to Georgia Southwestern, helping out Kip Drown.

Then came the first opportunity to be a head coach, which allowed her to come back home.

The combination was a good one.

Vickers said she walked into a goldmine at Irwin with its abundance of athletes. Softball was soaring, winning slow-pitch state championships in 1998 against Calhoun and 2000 over Toombs County.

Among the stars of the era was Latoya White. During the 2000 state softball tournament, Vickers told White, an outfielder, to come in closer for one batter. As White moved in, the batter hit a deep ball.  “All you saw was her take off running. She does a Willie Mays, catches it over her head.”

Sometimes they were lucky. In the 1997 playoffs, Abbie Morgan had a flyball pop out of glove. An alert Latoya Moffett, running over to back up the play, caught the ball before it hit the ground.

It was a big group of talent  for a small school that helped turn the athletic fortunes around. There was White, Morgan, Moffett, Takeidra McFadden Jessie Harper, Lauren Hudson, Heather Bayard, Paige Latham and T.J. Hall.

“It’s crazy how many people we had,” she said.

In basketball, Vickers watched Irwin improve steadily. The Lady Indians made two state tournament appearances under her, in 2001 and 2002, their first time qualifying for the tournament since 1984. Both years ended with a loss to East Laurens in the first round of the state tournament.

The Irwin state hoops appearances were in Class AA. They were in Region 2-AA, where the opponents included Cook’s Jazz Covington, who went on to star at Louisville before a long career playing in Europe. A combination of Moffett sticking to Covington and a triangle-and-two defense to contain both Cook shooting stars — the other being Valencia Jones — gave Irwin a few victories in the series.

Perhaps the biggest moment was the upset victory.

Leading into this upset, the Lady Indians had already earned the opportunity to see college basketball by winning a game at home. Vickers took them to see the ABAC Fillies. The next game on the high school schedule was against Montgomery County, then ranked No. 1 in their classification.

The players had a request. If they beat Montgomery, they wanted to go see a bigger college play basketball. They wanted to see Tennessee, who were far and away the best women’s program in the NCAA. Vickers had faith in her team, but admitted she did not think this particular victory would happen. Of course it did.

“We beat Montgomery County in our gym. So I have to figure out where in the world we’re going to watch Tennessee.”

Amidst all the fun were the Christmas tournaments. Irwin hosted a pair, with teams coming in from places such as Echols County, Bacon County and Berrien. “Those were great,” she said. “Something about those little, small tournaments.” The quality of play was high. The Echols girls, in particular, were one of the top-ranked teams in the state.

Vickers stayed at Irwin through the 2001-02 season. If she thought Ocilla was close to home, the next opportunity was even nearer.

The move back here was one Vickers considers “one of the proudest things I’ve ever done.”

She almost didn’t believe the call when she got it.

Vickers was mowing grass one afternoon when her mother came out and simply told her to get off the lawnmower. After pressing for details, Vickers learned that then-Tift County High principal Mike Duck was on the line with a job offer.

It was a blessing to move back home. Her mother, Ellen Vickers suffered a stroke the next year. Ivey’s been able to be around.

“God looks after you. He puts you where you need to be,” she said.

Upon her return to her alma mater, Vickers became softball head coach and assisted basketball.  Appropriately, her first softball game was against Irwin County. Tift won 10-0 in five innings.

Softball transitioned to fast-pitch, a game different than when Vickers was winning slow-pitch state championships as a player at Tift and coach at Irwin. “A lot of teaching,” she said. “Not only for me but for the kids.” Everything had a new approach, from baserunning to pitching. “Strategy-wise, it doesn’t compare.”

Tift went to state as a fast-pitch team in Vickers’ first season, the start of six consecutive years in the tournament. This peaked in 2007, when despite finishing as No. 3 in the Region 1, they advanced all the way to the final four before falling to Lassiter and Peachtree Ridge. Those two teams competed in the finals.

That wasn’t the only transition. With permission from ABAC softball coach, Donna Campbell, Tift County played there in 2002 until the field was ready at TCHS in 2003.

Mullis is responsible for bringing her into swimming.

“Ellen Mullis needed an assistant,” Vickers recalled. “I knew nothing.” But it was a new challenge. She embraced it. “It’s probably the best thing that ever happened to me,” she said. Like Irwin athletics, she considered it walking into a goldmine.

“Great group of kids. I got the best group of assistants I could ever ask for.” McElroy, Walker and Rice are her assistants. McElroy stepped down from head coaching cross country at the end of last season, but she’s sticking around for swimming.

Vickers adores the different mentality of swimming. Instead of being a pure team sport, it’s the athlete against the clock. “The clock tells you how good you are,” she said.

She also likes that everyone gets to participate and rates the state meet atmosphere at Georgia Tech as being the best. That experience has gotten even better over the years. In 2018, her first swimmers made the final day of the state tournament. The Lady Devils finished 15th as a team at the state meet this year and the Blue Devils were 16th. Swimmers made 13 finals and finished in the top 10 in five of the events.

No matter the calendar year, she said she sees no difference in the work ethic. “They work hard,” she said.

Football has been Vickers’ latest sport. John Reid is responsible for her being on the gridiron.

“He kinda talked me into that,” said Vickers of the former Tift head coach. “I figured, ‘Why not?’ Not too many females are involved in football.” She said it was a chance to learn something new. “He taught me a lot. I owe a lot to him.”

Vickers has learned not only how to fix a helmet, but how to do so quickly. She also learned about cold weather. Since she stepped in, two of Tift’s state playoff games have been in near-freezing temperatures.

She thought about going with Reid when he was hired at Rome High, but decided to stay at her alma mater and close to her parents. “Tifton would have been a hard place to leave for me.”

Vickers can’t help but notice the parallels between her parents’ coaching careers and her own. Ellen Vickers coached basketball, softball, tennis and recreation department swimming. Vic coached football and softball.

“I’ve done just about everything my parents have done,” she said. “The only thing that I haven’t done that she’s done is [that] she’s coached cheerleading.”

Football may be the last new adventure for Vickers in the sporting world. It might not be.

“If you’re not learning, you’re just sitting still,” she said.

Sherrie Scarberry Justice, 57, of Tifton passed away Monday at Miller County Nursing Home in Colquitt. Among her survivors is her mother, Ruby Scarberry of Tifton. Arrangements are incomplete and will be announced later by Bowen-Donaldson Home for Funerals.