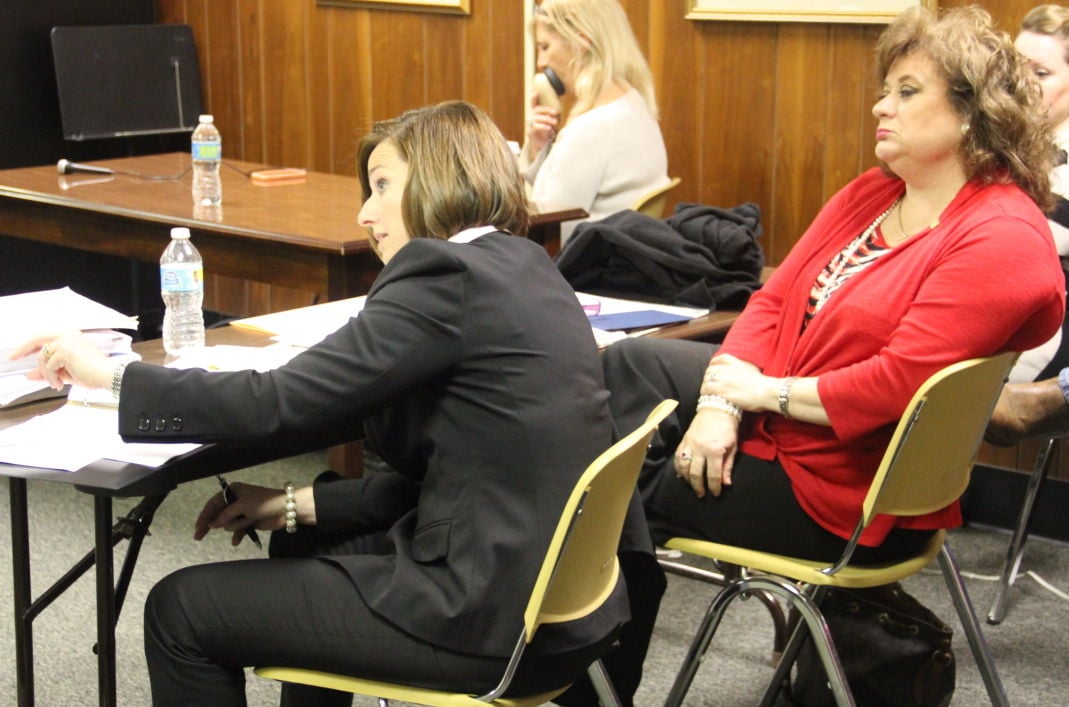 Tift County teacher Kelly Tucker, right, is shown with her attorney, Tina Folsom, during a public hearing at the Tift County Board of Education office Monday morning. 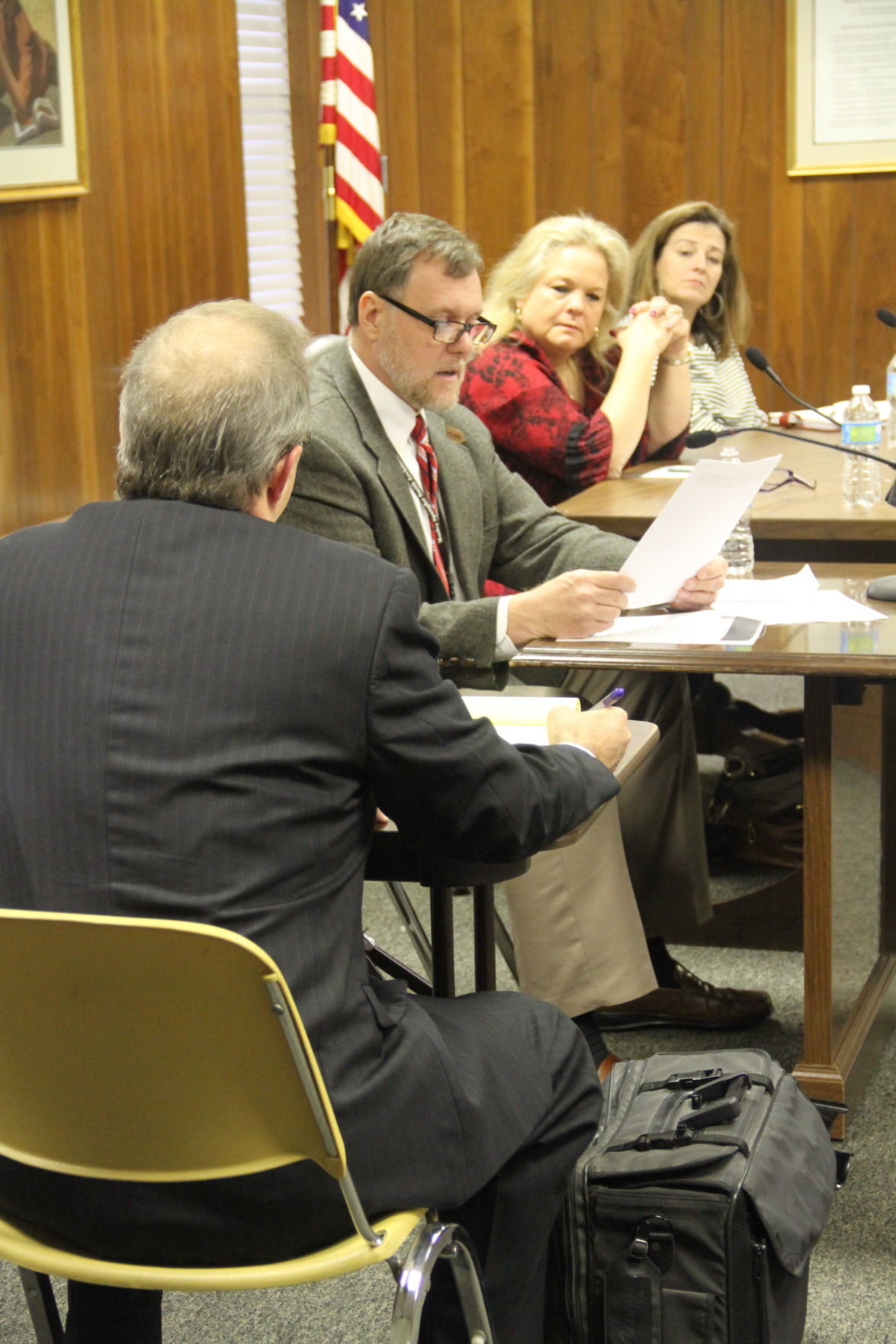 Tift County teacher Kelly Tucker, right, is shown with her attorney, Tina Folsom, during a public hearing at the Tift County Board of Education office Monday morning.

TIFTON — An Eighth Street Middle School teacher is appealing a 10-day suspension without pay following a controversial comment she posted on Facebook in early December.

A public hearing began Monday morning at the Tift County Board of Education office on the matter, which continued into the night, during which many witnesses were questioned throughout the day. A final decision has not yet been made by the board.

Kelly Tucker, who has been employed with the Tift County School System for 25 years, responded to a post on Facebook by Kirsten Underwood of WTIF and WFFM concerning some protesters, who were holding a sign that read "Black Lives Matter" in reference to the ongoing situation in Ferguson, Mo., at the parade during the Hometown Holidays Christmas Celebration on Dec. 6.

Underwood posted a question asking whether or not it was appropriate to have a Ferguson demonstration at the parade. Many responses by people followed, which were pro and con.

"Ms. Tucker made a post that day that we consider offensive, and it has caused problems within the system," said school board attorney Hank Pittman.

He then read the post aloud: "It's turned into a race matter. What about the thugs that beat the father in his vehicle because he didn't slow down? What about the thugs that shot the college baseball player because they were bored? The list can go on and on. If the dude hadn't stolen, he would be alive. I think signs should read, 'Take the hood off your head and pull up your dang pants and quit impregnating everybody.' I'm tired of paying for these sorry (expletive) thugs. I would much rather my hard earned money that the government takes go to people who need it, such as (abuse of) adults and children, not to mention the animals they beat and fight too. That's all I'm saying."

He said as soon as Tucker made the post, it went viral and other people started noticing it and contacted Superintendent Patrick Atwater with complaints. Atwater has heard from local leaders, parents of students in Tucker's class and her colleagues.

"They asked that something be done about it," Pittman said. "The post is a violation of the code of ethics for educators."

According to the Tift County Schools Employee Handbook, "An educator shall demonstrate conduct that follows generally recognized professional standards and preserves the dignity and integrity of the teaching profession. Unethical conduct includes, but is not limited to, any conduct that impairs and/or diminishes the certificate holder's ability to function professionally in his or her employment position, or behavior or conduct that is detrimental to the health, welfare, discipline or morals of students."

"What this post has done is offend a large segment of our society here in Tifton — the African-American community, and it has undermined Ms. Tucker's ability to function in her position as a teacher, especially where you have parents who are calling wanting their students removed from her class," Pittman said.

Atwater issued a charge letter to Tucker, recommending the 10-day suspension. Pittman noted when a teacher is suspended, terminated or their contract is not renewed, they have a right to a hearing.

While being questioned by Pittman, Atwater did comment that Tucker was noticeably upset and regretful when presented with a charge letter.

Atwater said had it not been for Tucker's good teaching record prior to his recommendation of suspension, it could have easily been a termination.

He said he learned of Tucker's post from Tift County Commissioner Melissa Hughes and others, even a former student and current high school student and a parent who asked to have her child removed from Tucker's class due to a loss of trust.

Atwater said after he read Tucker's post, his immediate interpretation was that it was "completely filled with racial overtones/racial stereotypes." He said he instantly believed it was aimed toward blacks and knew he had a situation on his hands.

Tina Folsom, Tucker's attorney, said during Tucker's 25 years of teaching, she has represented a wide variety of students and has impacted a lot of people in the community. She said her colleagues look to her for advice and call her the cheerleader of ESMS.

"She is the role model for the educators there in disciplining students in how they interact with each other. She is a good person," Folsom said.

She explained when Tucker posted on Facebook, it was on a Saturday night and she was in the "comfort of her own home." She said Tucker voiced her opinion and that it was her right to do so, citing the First Amendment.

Folsom said Tucker's post was taken out of context and blown out of proportion. She said it was not directed toward a particular race. She also noted before that post, Tucker posted that "all lives matter."

Folsom said they believe there were a few blacks who were sensitive/offended to the comments made by Tucker. She said offensive words are subjective.

"That is in the eye of the person hearing those words," she said. "For Ms. Tucker not to mention a particular race and for them to take offense to that, that is their opinion and their right under the First Amendment as well."

Folsom said to discipline Tucker for exercising her right because a few people disagreed with it is improper.

"Each day to her is approximately $250. I want you to think about a criminal who has a misdemeanor crime — the maximum penalty there is only a $1,000," she said. "We're judging Ms. Tucker, in my opinion, very harshly for something that was done not while she was teaching, not in the presence of students, not directed toward students and not directed toward a particular race."