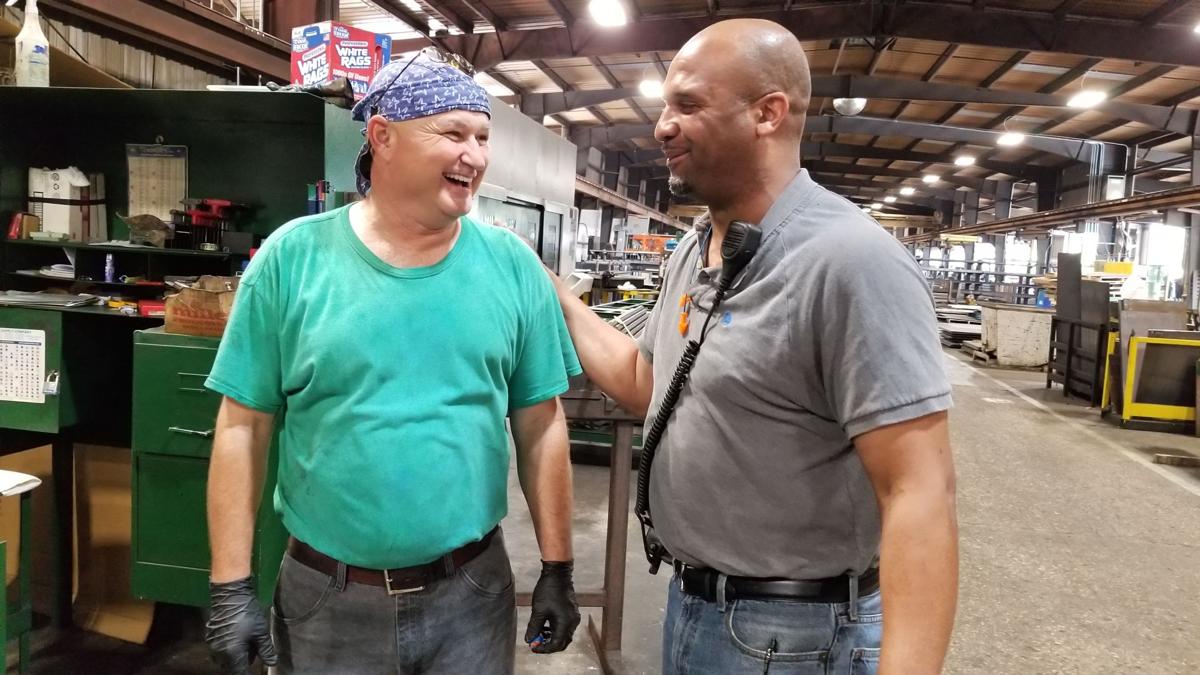 Donnie Carter, right, talks with Dwayne Justice towards the end of the day shift. 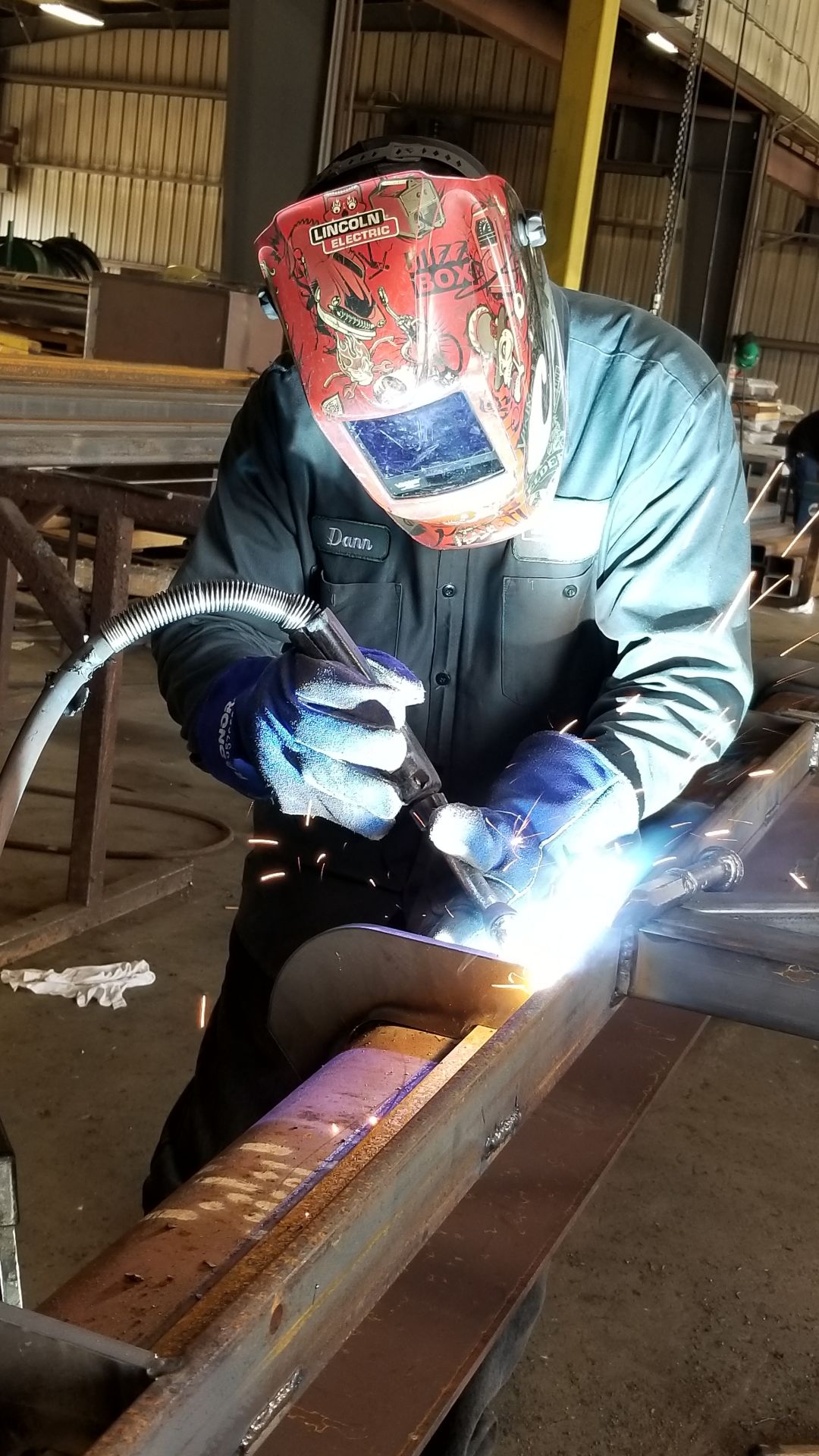 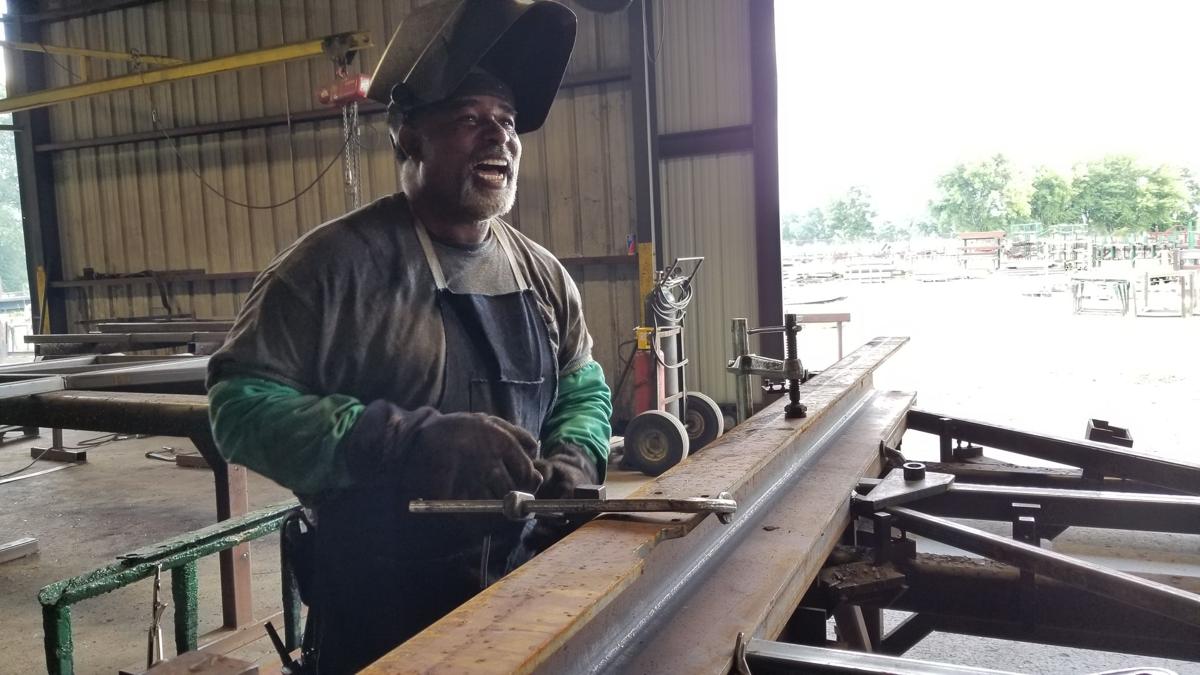 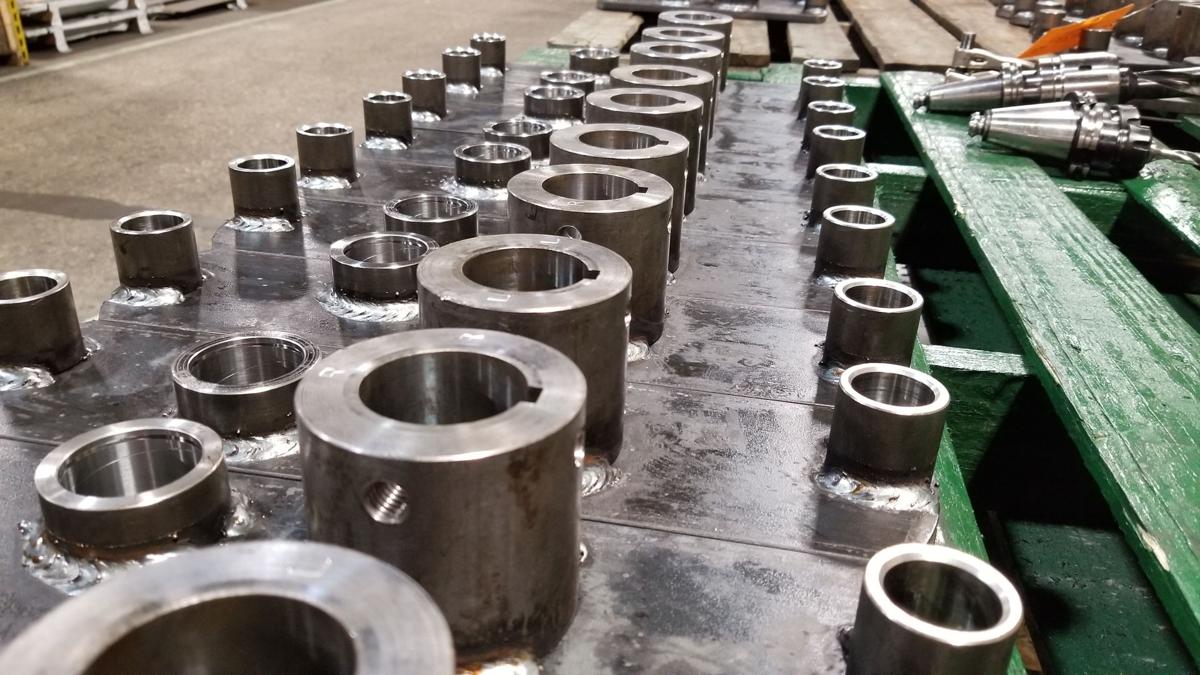 Cut steel that will form part of raker arms for peanut combines.

Donnie Carter, right, talks with Dwayne Justice towards the end of the day shift.

Cut steel that will form part of raker arms for peanut combines.

TIFTON — It starts with coffee.

He gathers around the coffee pot with other employees — welders, builders, painters, engineers, managers — before starting the work of the day.

Carter’s been with KMC for 25 years, starting in the machine shop for five years, then spending 15 years with the saw group. Now, he works as a group leader.

A 25-year stint isn’t unusual for KMC employees, according to Carter.

“Most people stay,” said Carter. “We’ve got guys who’ve been here 30, 40 years because they like it, they like the environment.”

Kelley Manufacturing Company was started in Columbus in 1966 by C.D. Kelley.

In its second year, the company introduced a two-row peanut shaker inverter.

“That’s probably the main product that put the company on the map to start with,” said Lanier Carson, CEO and board chairman.

After a few good years, Kelley wanted to expand, but a clay hill behind the plant make it difficult, Carson said

For room to grow, Kelley looked to Tifton, which he felt was the right place, due in part to its location: right on Interstate 75 with several major highways running through it.

In 1971, they started construction. A year later, they moved in.

In an average year, it can be 50 percent or more of their sales, according to president Bennie Branch.

KMC added on peanut diggers and combines  as the company grew.

A significant development came when they decided to design and create a four-row peanut harvesting combine in 1989. At the time, a two-row combine was standard.

Even for someone who’s never set foot in a peanut field, the advantage of being able to harvest twice as fast is readily apparent.

The standard now, says Branch, is six rows, which KMC introduced in 1993.

While the basic idea of peanut harvesting has stayed the same, the technology has changed through the last few decades.

GPS allows farmers to plot and monitor their fields meticulously, tracking harvests and identifying weak parts of fields. A spot of weak growth in an otherwise healthy field can help point out a nematode infection or other problems.

Farmers can use that information as a planning tool for next year.

Years of research into yield and varieties have helped lead to much greater yields for peanut farmers.

“We have a lot of customers that are harvesting three tons of peanuts per acre,” said Branch.

KMC tries to do as much as possible in house, from welding and machining raw steel down to the other end of the 200,000 square foot building, where peanut equipment receives a bright green paint job before heading out.

All total, they employ around 325 people, according to Branch.

Those jobs range from manufacturing and sales to management and engineering.

Along with peanuts, the company has also diversified throughout the years, adding new products and wading into different agriculture areas.

Poultry equipment is one, with KMC focusing on poultry house cleanup, equipment used to prepare and clean chicken houses in between flocks.

And the changes haven’t just been in equipment.

In the 1990s, Carson led the decision to turn KMC into an employee owned company.

Employees receive stock for every year they’re with the company.

“Our customers are dealers, but our end user is the farmer,” said Jimmy Tomberlin, chief financial officer for KMC.

Those farmers talk with equipment dealers and KMC staff about the issues they’re facing in the fields.

Engineering looks at those problems and figures out if there is a way to alleviate them.

“We’re always trying to find niche products…we can be the best at,” said Tomberlin.

That might lead to a small product or redesign, or, as has been the case recently, prototyping a whole new peanut combine.

For the new combine design, “we started with a blank page,” said Branch.

Engineering started at the root of it: What would a peanut combine look like that considered the challenges of peanut harvesting and worked backwards from there to address those challenges?

Take the size of a harvested peanut, which can range from as small as a fingernail to as large as a finger.

A harvester needs a system to filter out debris without filtering out the light weight peanuts.

Those problems and needs led to a design and a prototype, which KMC has been testing out on its 486-acre test farm.

“You see their combines here and you see them in other foreign countries,” said Spearman. “It’s a great asset. Our peanut industry wouldn’t be where it is today without KMC.”

An early foray into the international market came in 1982.

One day, a Dr. Kahlil came through the front doors of KMC.

He said he was from Saudi Arabia and wanted to talk to someone about peanut harvesting.

Carson sat down with him and talked him through their equipment catalogue, their different products, how they could benefit farmers.

Kahlil thanked him and left.

Carson thought that was that, but two weeks later the phone rang. Kahlil invited him to visit Saudi Arabia.

There, Carson was “asked endless questions about peanut harvesters and yields,” he said.

The international business kept growing from there.

‘You have to get a feel for people’

After coffee, Carter runs through a pull list of the steel and materials his team needs for the day.

From there, it gets cut into beams, bars and different parts for the different equipment that goes out the door, such as rocker arms for peanut combines or dump cart frames.

Carter, who’s raised four daughters in his 25 years with KMC, became a group leader five years ago and it’s a role he takes seriously.

It’s part of the reason he starts the day talking with everyone over coffee.

If he notices someone on his team is in a bad mood that morning or looks like they’re having a tough time, he makes a mental note to check in with them, to try and boost them up if they’re down.

Carter stops to catch up with Dwayne Justice, a CNC machinist, as he walks through the shop towards the end of the day’s shift

Education has long been a part of KMC’s culture.

When Carson came on board in 1972, Kelley needed 22 welders working in the new facility.

He only found seven.

Carson had some welding experience, so he started teaching welding, training up the people they needed to make the place work.

While he’s not teaching welding classes anymore, the company offers to reimburse employees for education expenses.

That’s the case with Justice, who’s taking classes towards an associate’s degree at Wiregrass Technical College in Valdosta.

“If you treat people right, they’ll go above and beyond,” said Carter.