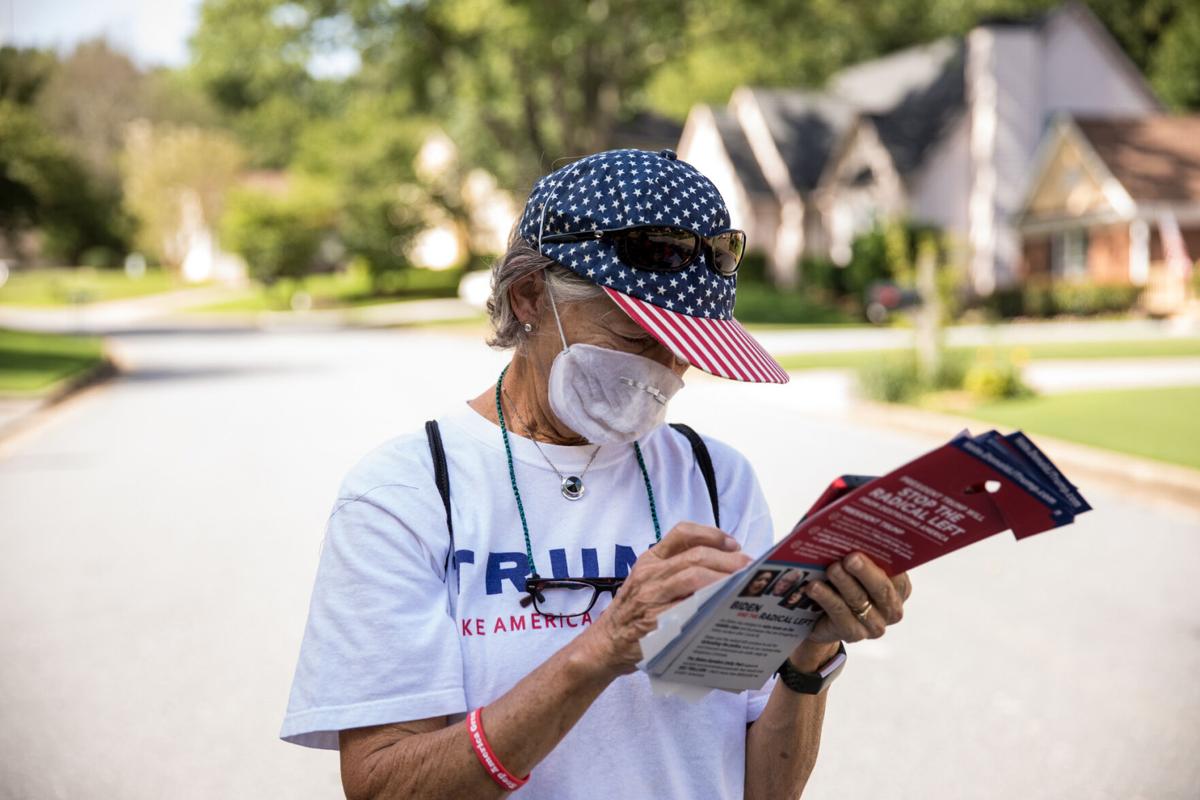 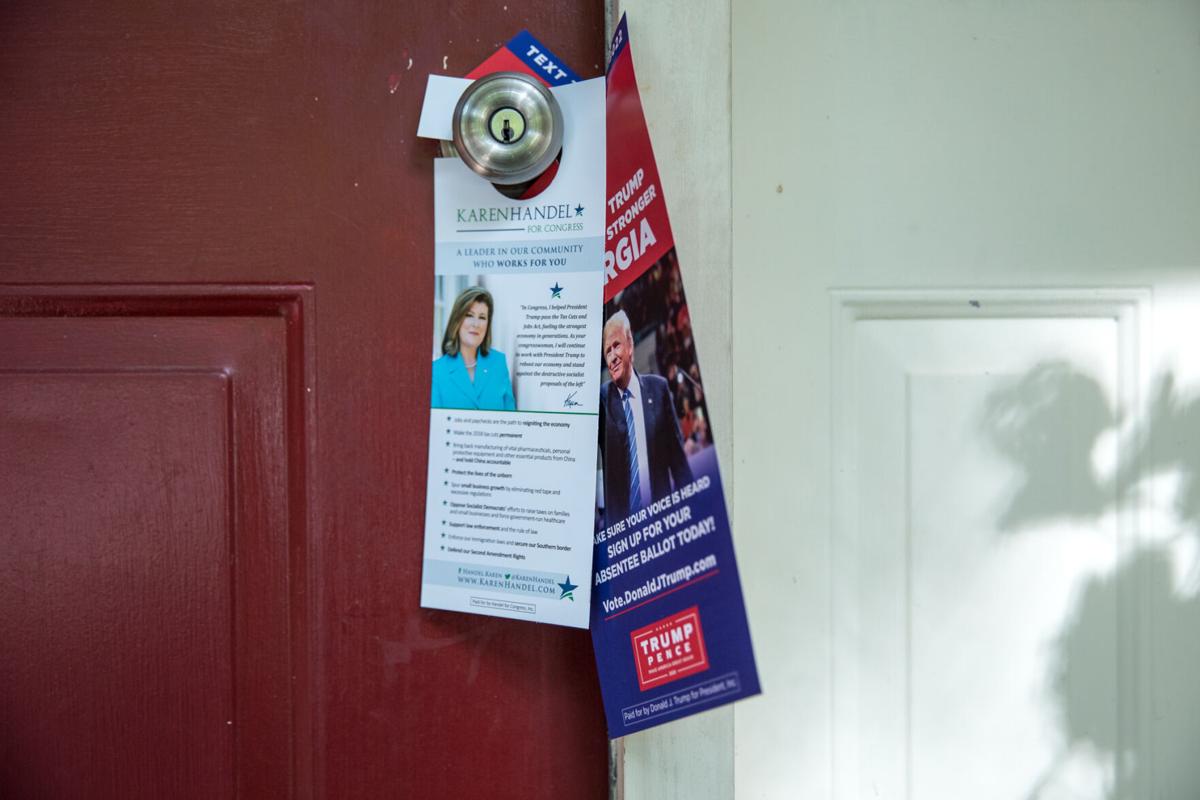 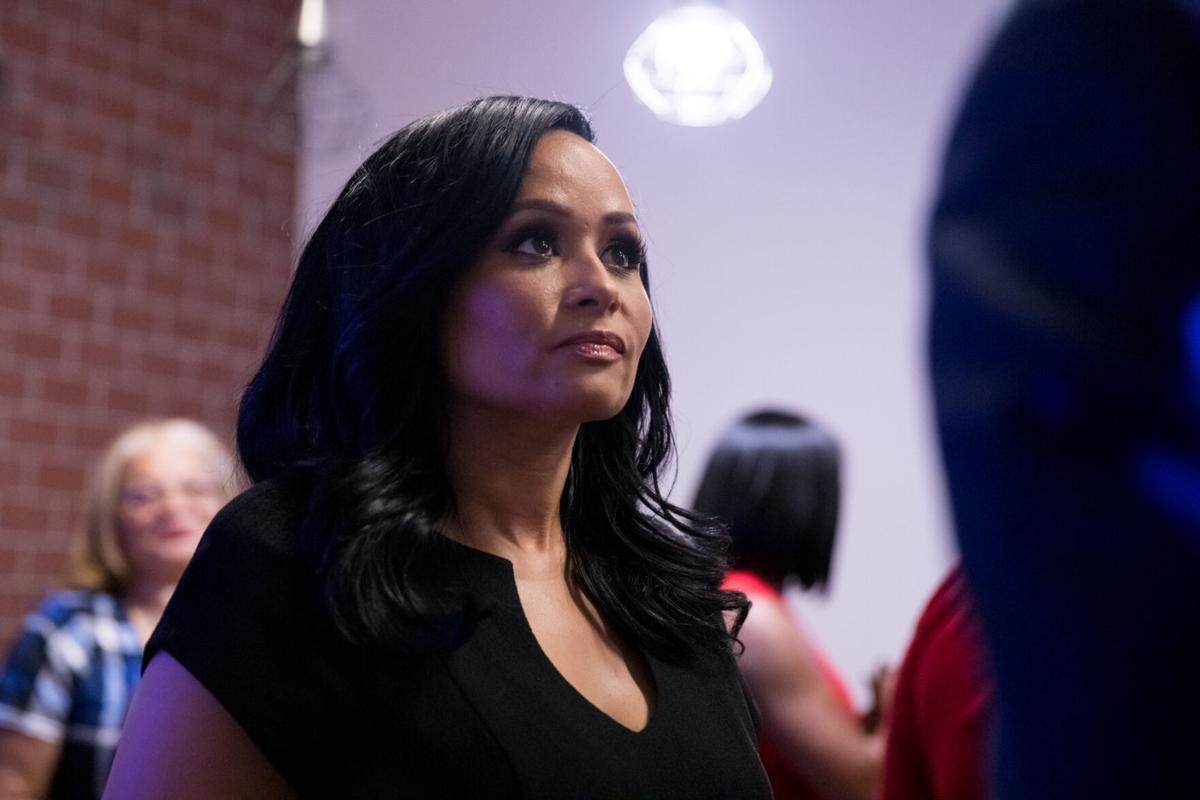 Katrina Pierson, senior advisor to the president, mingles with supporters at the Black Voices for Trump office in Decatur Sept. 10.

ATLANTA — Usually, a house with an American flag in the front yard is a good sign for Trump 2020 door-knockers.

But they don’t need to guess what party a household votes for — through an app, volunteers target Republican, swing, undecided and unregistered voters.

The data-driven strategy is an example of the Trump Victory campaign's mode of operation and gives insight into Republicans aggressive voter outreach ahead of the 2020 election. While the pandemic is still ongoing, volunteers, state Republican candidates and surrogates for the president travel the Peach State to ensure they get face-to-face time with voters.

This cycle, the Trump Victory volunteers have knocked on more than 900,000 doors, according to the campaign, and made of 5.6 million phone calls. A feat that may not have been necessary in Georgia in the last general election.

“We understand that boots on the ground matter,” Brian Barrett, regional political director for the campaign, said. “That can be the difference maker in a campaign."

While time continues to edge closer to what is being hailed on both sides of the aisle as “the most important election of our lifetime,” Republicans have amped up their canvassing in Georgia and other states where they haven’t always had to fight for the vote.

Republicans have been criticized for continuing in-person events and canvassing at the risk of voter health and safety, but remain adamant the decision will give them an edge over Democrats — who have stayed true to an almost entirely virtual platform.

Although Trump hasn’t added a stop in Georgia to his ongoing string of massive rallies, he’s made numerous visits as president and wooed high-profile state politicos. But senior advisors say their strategy to build excitement for the president isn’t always flying him to the Peach State in Air Force One, but dispatching senior advisors and family members as surrogates to reach a larger number of voters at once.

“Whenever these folks come in to the state,” Billy Kirkland, senior advisor to the president, told CNHI, "they help to add to the excitement, to build the excitement and recruit more and more volunteers that in turn, become trained activists for the president.”

On Sept. 10, a group of a couple dozen crowded into the small Black Voices for Trump Office in Decatur. Few wore masks as Katrina Pierson, senior advisor to the president, mingled with and rallied Black voters.

Pierson told CNHI despite the pandemic — that had at the time sickened more than 289,000 Georgians and caused more than 6,200 deaths — the campaign is focused on high visibility among target voters.

“We have to get back to normal. We are following the science or following the guidelines. We can't pretend that we're not human beings anymore,” she told CNHI. “... It's very important that voters hear from the candidates, if they're going to vote for who's going to be in control of your future for the next four years, we can't just pretend like that's not happening.”

Georgia's state Republican candidates have stuck to the same tune, holding dozens of in-person events where temperatures are checked at the door but masks remain optional and the state's limits on large gatherings don't usually apply.

The campaign says volunteers are eager to do the work — however, numbers showing an increase in volunteers from month to month were not provided when requested.

“Trump Victory’s volunteer army has been growing exponentially throughout the cycle, yielding thousands of Georgians who are trained, tested and ready to get out the vote for President Trump and Republicans up and down the ticket," Savannah Viar, campaign spokesperson, said in a statement. "The unbridled enthusiasm behind President Trump and his pro-growth, America-first agenda will keep the Peach State red in November.”

Debbie Norris, a former physical education teacher, donned a mask as she walked a subdivision in Alpharetta. The 71-year-old knocks on doors for the campaign three to four times a week. She consults her Trump 2020 app to pick which houses to target. On her person, she carries absentee ballot applications.

On that particular day, only two voters answered out of about a dozen doors knocked in an hour. But both were Trump supporters. If doors go unopened, Norris leaves leaflets for both the presidential and local campaigns.

“At least they know we’re out here trying,” she said.