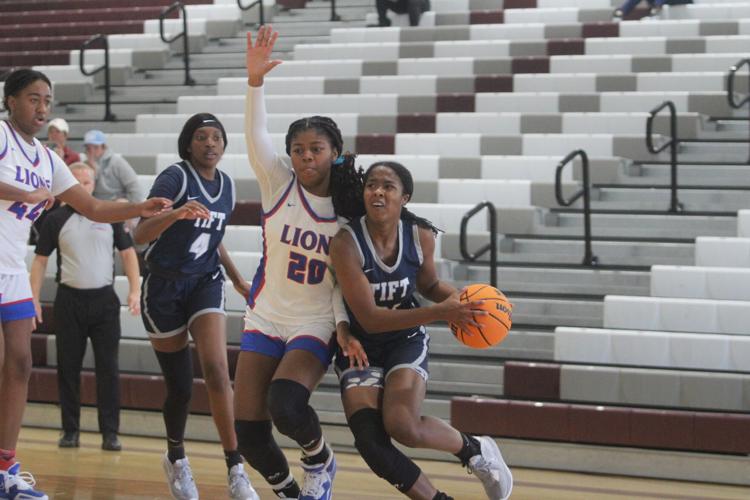 Jalaya Miller attempts to squeeze by Peachtree Ridge on the baseline in the 2nd quarter. She was Tift's high scorer against the Lady Lions, with 11 points. 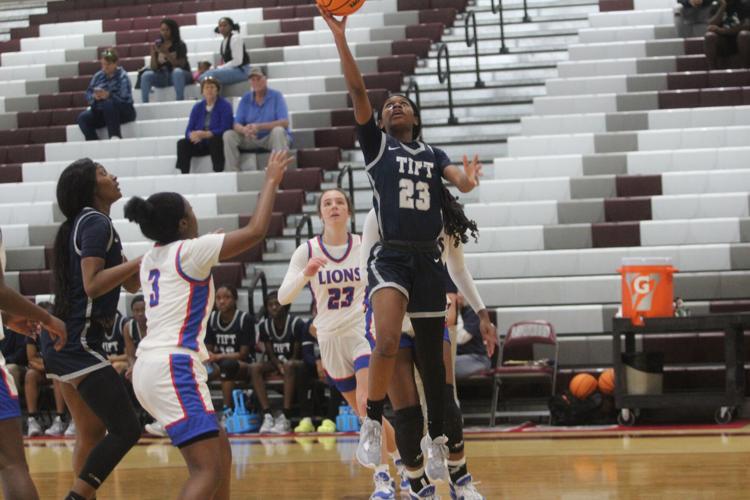 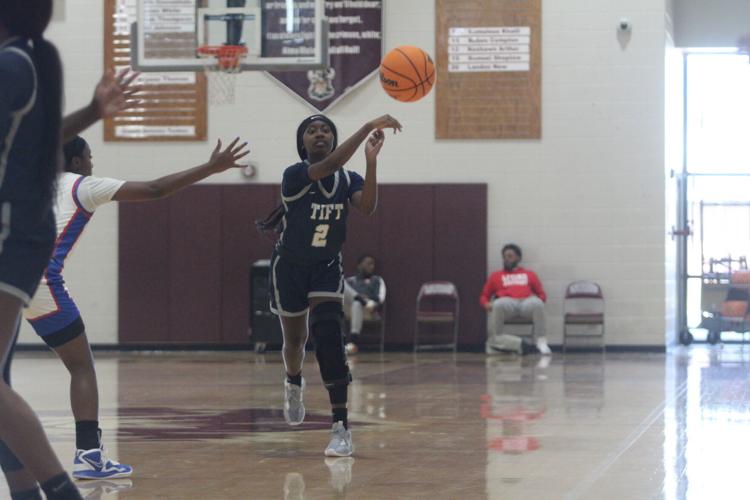 O'ashia Cushion spots an open teammate near the basket during the 2nd half.

Jalaya Miller attempts to squeeze by Peachtree Ridge on the baseline in the 2nd quarter. She was Tift's high scorer against the Lady Lions, with 11 points.

O'ashia Cushion spots an open teammate near the basket during the 2nd half.

VALDOSTA — Tift County was within two points of Peachtree Ridge with 2:45 to go Tuesday afternoon at the Charles Cooper Classic, but the Lady Lions scored on a drive, then slowly expanded on that advantage for a 46-36 victory.

Peachtree Ridge (4-0) is one of the state’s best this season, ranked No. 6 in Class 7A in Score Atlanta’s latest poll. The young Lady Devils gave them a ride all of the way. It was a two-point game at halftime and after Peachtree Ridge looked poised to make it a runaway, Tift went on a 6-0 run over three minutes in the 4th to make a game of it again.

Tift had Peachtree Ridge’s number early. Faith Hillmon opened scoring with a free throw and the Lady Devils forced three turnovers over the first 90 seconds. O’ashia Cushion burned a three-pointer in the corner and it was 4-0.

Six-footers Aaliyah Hunt and Kalyce Williams were Tift’s biggest challenge in the contest. Hunt was the first to strike, scoring all 10 Lady Lion 1st period points. Hunt, deadly in the post, ran that number to 11 before the Lady Devils cut her off.

Jakembre Beckhom scored Tift’s last four 1st quarter points, once off an offensive rebound and other on a miraculous play by Cushion. Driving to the basket, Cushion was rejected on a shot attempt. She caught it mid-air, then flipped to Beckhom under the goal for the points before landing out-of-bounds.

Peachtree Ridge led 10-8 after the quarter, pushing it to 13-8 at 6:31 in the 2nd when someone else on their roster finally scored, this being Sanaa Tripp on a jumper.

Before the Lady Lions could turn on the jets, Tift was right back in it. Hillmon nailed a three-pointer from the top of the key at 5:18. Jalaya Miller inched closer with a free throw 30 seconds later before giving the Lady Devils the lead right back at 15-13 with her own three off an inbounds pass at 4:05.

It stayed close for the rest of the half. Tripp tied it, then Jimmya Cushion put Tift ahead 16-15. Peachtree Ridge was up at 19-16 before Miller made Tift’s third triple of the quarter to knot it again.

In contrast to the seesaw 1st half, the 3rd quarter was almost entirely Peachtree Ridge. They had gone into intermission ahead by two points, courtesy of free throws in the final 30 seconds. That carried over as Tift struggled to find scoring opportunities on their end.

A Hillmon free throw was the only point for nearly all of the frame as Williams joined Hunt for scoring in the paint. Down 30-20, Hillmon assisted O’ashia Cushion to finally shake off the curse with 35 seconds left. They were down 30-22 going into the 4th.

Hunt pushed the lead back up to 10 to begin the final period, then the Lady Devils found their footing again.

Hillmon scored, then Jimmya Cushion connected with Miller on a fast break. Peachtree Ridge scored, then it was the Cushions again. Jimmya drove the baseline for a bucket and O’ashia delivered a three from the northeast corner. Suddenly, it was 34-31.

Tripp broke up the party momentarily, then O’ashia Cushion split the net again from nearly the same spot for a 36-34 contest with 3:36 to go. Tripp and Jimmya Cushion traded baskets before Tripp’s drive pushed it back to four, 40-36 with 2:42 to go.

Momentum hung in the air for a moment. Peachtree Ridge missed the front end of a one-and-one and the Lady Devils snagged the rebound. They fired up a shot but could not get it to fall. The Lady Lions recovered and went into shutdown mode.

Patiently, they wore down the clock and attacked the middle, drawing fouls. Over the minute two minutes the Lady Lions made 4 of 6 from the stripe to keep Tift at bay.

The Lady Devils’ next game with be a doubleheader. On Dec. 2, they and the Blue Devils will be at Cook. This will be the regular season debut for the boys. On Dec. 3, the teams go to Valdosta.