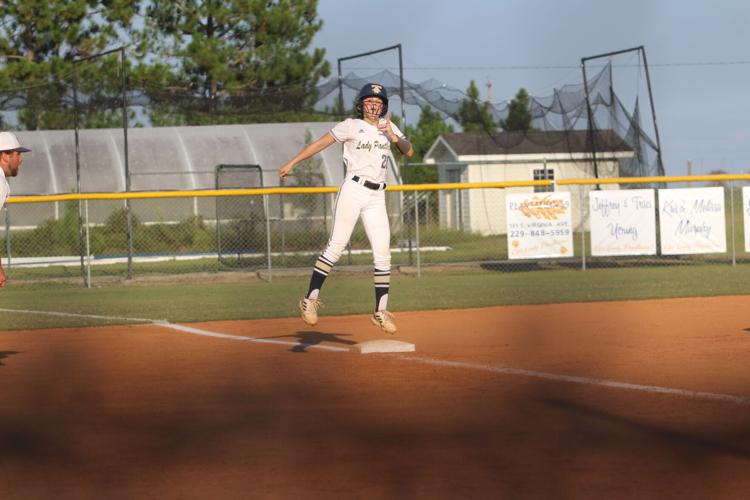 Isabel Fernandez jumps for joy after a 1st inning stand-up triple. She scored one pitch later on a single by Pyper McCard. 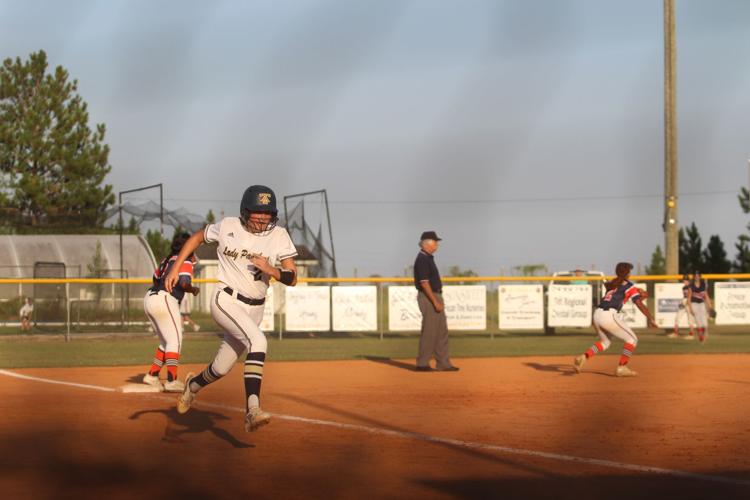 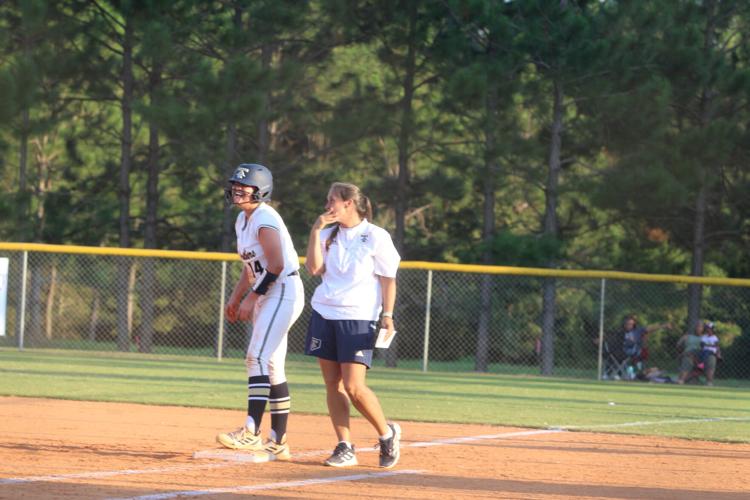 Ali Strenth and Tiftarea assistant coach Cindy Harbort share a giggle at first after Strenth avoided being picked off.

Isabel Fernandez jumps for joy after a 1st inning stand-up triple. She scored one pitch later on a single by Pyper McCard.

Ali Strenth and Tiftarea assistant coach Cindy Harbort share a giggle at first after Strenth avoided being picked off.

CHULA — Tiftarea Academy head coach Rob Flick wanted to get a sacrifice bunt down in the 2nd inning Tuesday, Sept. 20, but had to take it off when two attempts were fouled. Instead, Caroline Heard singled past shortstop and helped spark a five-run rally against rival Valwood.

It was that kind of night for Tiftarea, when everything turned out better than could be imagined. They defeated the Lady Valiants, 8-0, in five innings and have now put themselves in excellent position to retain the GIAA District 3-AAA softball race.

“We hit the ball, we pitched it well, we played good defense,” said Flick. Everyone had good at-bats, he said. On Heard’s hit, he said the bunt calls put her in a tough situation, “But she comes up and has one of her best two-strike at-bats she’s had.”

Valwood won the first game in this year’s series, 11-5. Pyper McCard was not available for the Lady Panthers in that contest and it was McCard who was in the circle in the rematch. She allowed only three hits and one walk while striking out 8. Her presence — and a nifty double play by Mackenzie Matthews and Elli Bryan — ensured that only Tiftarea provided any offense this time around.

McCard struck out two in the 1st inning. Last year’s game in Chula was a pitching duel from both sides, but this one would not be.

With one out in the bottom of the 1st, Isabel Fernandez tripled to deep right field. McCard jumped on the first pitch she saw for a sharp single past shortstop and the Lady Panthers took an early 1-0 lead.

Valwood threatened in the 2nd, with singles from Aahna Mattis and Hall Thomas. The bases then loaded when Annasten Creech reached on an error, but could not break through, with McCard ending the inning with a strikeout. The Lady Panthers then broke through in the bottom half of the 2nd.

Matthews walked. Heard could not get the sacrifice bunt fair, but made up for it with a single. Elaine Mercer singled and Tiftarea filled the bases with no outs.

Bryan bounced a hit past shortstop, scoring Matthews and Heard. McCard doubled in two more before Ali Strenth’s single turned it into a 6-0 contest.

Valwood, desperately needing to find some momentum, attempted to force it in the 3rd.

The Lady Valiants finally had something going, another bases loaded situation and this time with no outs. Madison Watters, Graceigh Booth and Renada Wilson occupied the bases and maybe, finally, McCard would crack and get the visitors back into the game.

But McCard and Tiftarea became even stronger. McCard got a strikeout. One out, bases still full. Valwood popped to deep second and Matthews made an over-the-shoulder catch. The Lady Valiants attempted to tag up and Matthews threw a strike to Bryan at the plate for an inning-ending double play.

“[Matthews] just read it,” said Flick. “A lot of people would just catch the ball and be OK with it because you’re catching it on the infield, but that’s their fastest player at third base. [Matthews] made sure she was on her toes and made a great play.” Tiftarea was ready for it, he said, because it would be the type of sac fly he’d try to score on.

Two more runs by Tiftarea put the game away.

Matthews singled and moved into scoring position on Elaine Mercer’s sac bunt. Bryan hit a fly to no man’s land beyond third base. It dropped and Matthews came around for run No. 7. Fernandez hit a sharp grounder that bounced off an infielder for a double. s xBryan, reading the play all the way, never hesitated around the bases, needing only a nod from Flick at third to round s the bag and score.

“She knew,” said Flick, when Bryan began heading his way. “She saw me nodding.”

Waters retired Tiftarea without damage in the 4th, but without Valwood being able to solve McCard, the mercy rule came into affect after the top of the 5th. She froze her final batter with a strikeout.

McCard and Bryan drove in three runs for Tiftarea on the evening. Those two, as well as Strenth, had two hits each. Before the game, it was announced that Bryan recently picked up her 100th career hit.

The Lady Panthers entered Tuesday with a 4-1 district record to Valwood’s 6-0. Had Valwood won, it would have all but secured the crown for the Lady Valiants. Now, it’s a two-team battle and neither can afford to stumble at all going into the final weeks of the regular season.

Tiftarea returns to action game is Sept. 27 at home against Deerfield-Windsor.