Grace Odom pushes Tiftarea's lead a little further in the second quarter, absorbing a foul on this play. The Lady Panthers took advantage of many free throw opportunities to win against Southland. 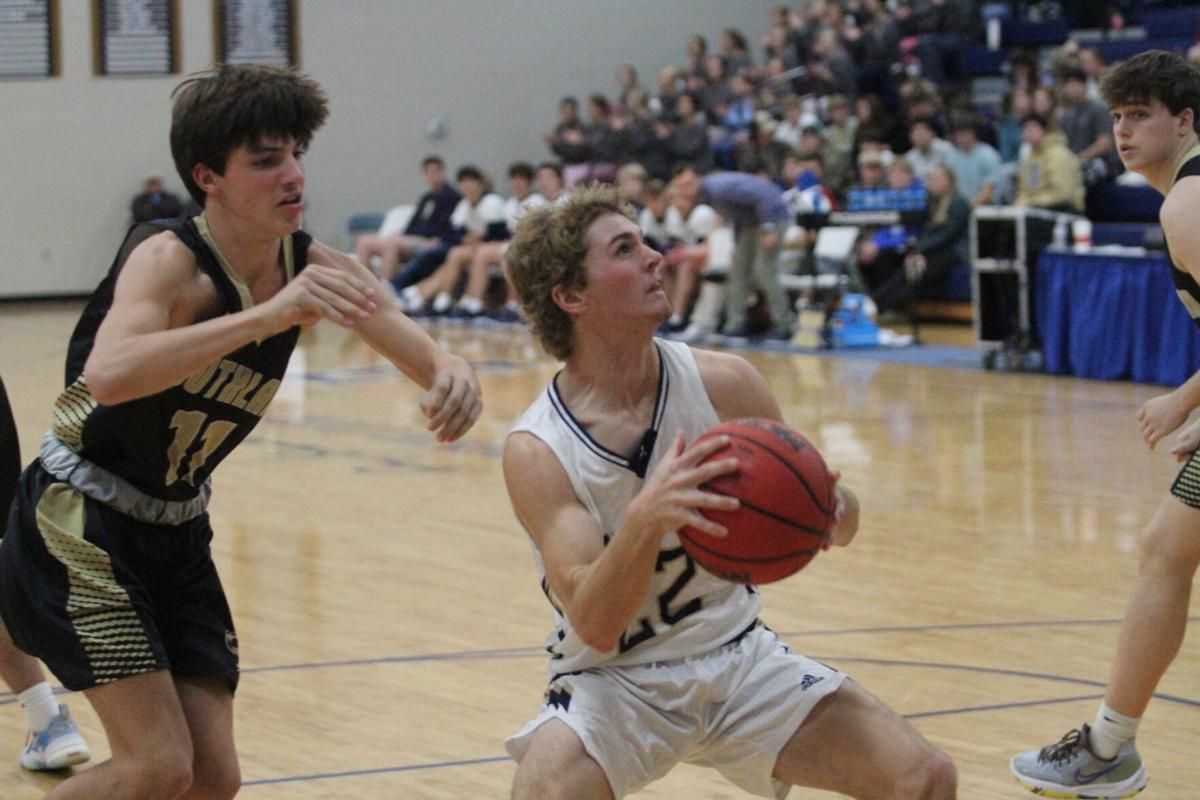 John Austin Lee (22) sizes up an opening under the basket.

Grace Odom pushes Tiftarea's lead a little further in the second quarter, absorbing a foul on this play. The Lady Panthers took advantage of many free throw opportunities to win against Southland.

John Austin Lee (22) sizes up an opening under the basket.

CHULA - One year ago, the Tiftarea Academy Lady Panthers lost by 35 points to Southland Academy in their own gym. Tuesday night, they won with ease.

The night was a split. The boys game, played at a slower pace, took a bit longer to reach its conclusion. Southland won it, 54-19, dropping the Panthers to 0-2 in Region 3-AAA competition.

The start of the Tiftarea-Lady Raiders game seemed to indicate something similar to that of a year before.

Ali Strenth's three-pointer at 2:04 tied the contest at 5-all, but Southland finished the quarter on a 6-0 run, with four points from Mary Easterlin.

The streak extended even further, to 14-5, a minute into the second frame. But the Lady Panthers not only weren't giving in, they found a tender spot in the visitors' defense: The paint.

Tiftarea shot 11 free throws in the second period and made 7 of them. Strenth started the parade to the stripe at 6:14, making both shots. At 3:33, they were shooting their seventh and eight, again with Strenth at the line, and again her sinking both.

Strenth's free shots at 3:33 made the score 14-13. The Lady Panthers were back in it. Thirty-seven seconds later, Livi Mullis put them ahead at 15-14. That turned out to be a lead Tiftarea never relinquished.

Mullis went the length of the floor on a steal to end the half. Tiftarea was ahead, 22-17.

Riley Mitchell briefly interrupted the Lady Panthers' momentum, narrowing the margin to 23-19 at the start of the third, but this was only temporary. Grace Odum slipped behind the Southland defense to catch a long inbounds from halfcourt and turn it into an easy basket.

The lead hovered around 10 points for the last five minutes of the third and the first four of the fourth, then the Lady Raiders gave it one last surge.

Mullis popped in an offensive rebound at 2:33. An Elli Bryan three-pointer and another basket by Mullis relieved the pressure at 51-42 with 80 seconds remaining. Southland hit a bucket at the horn for the final score.

The combination of Mullis, Strenth and Bryan was more than what Southland could withstand. Mullis dropped in 16 points, with Strenth on her heels at 15. Bryan, playing slightly limited minutes after being injured a week ago, finished with 11.

Southland led all the way in this one Tuesday, starting with a three-point shot by Carmelo Volley. Dylan Harbort drove the lane for Tiftarea's first points at 4:54, but the Raiders were up 14-2 after a quarter.

John Austin Lee and Colson Stewart came through with shots with the second canto, but were unable to cut into Southland's lead. The Raiders moved at a snail's pace, with Luke Exley pushing the lead to 15 points on two occasions.

At halftime, Southland was in front 21-6.

Noah Yaeger hit a three in the third, then a basket under the goal off an assist from Lee. The Raiders, rotating their lineup, saw Cedric Smith score the last five of the third, extending the margin to 33-13 at its end.

The Walkers, Fletcher and John Robert, joined Stewart in the scoring column in the fourth.

Yaeger led the Panthers' attack with 5 points. Stewart and Harbort contributed 4 each.

Smith was the only player for either team reaching double figures. He scored 12 for Southland. Carlos Tyson added 9 and Volley finished at 8.

Tiftarea will stay at home to finish the week, hosting Valwood Friday night.