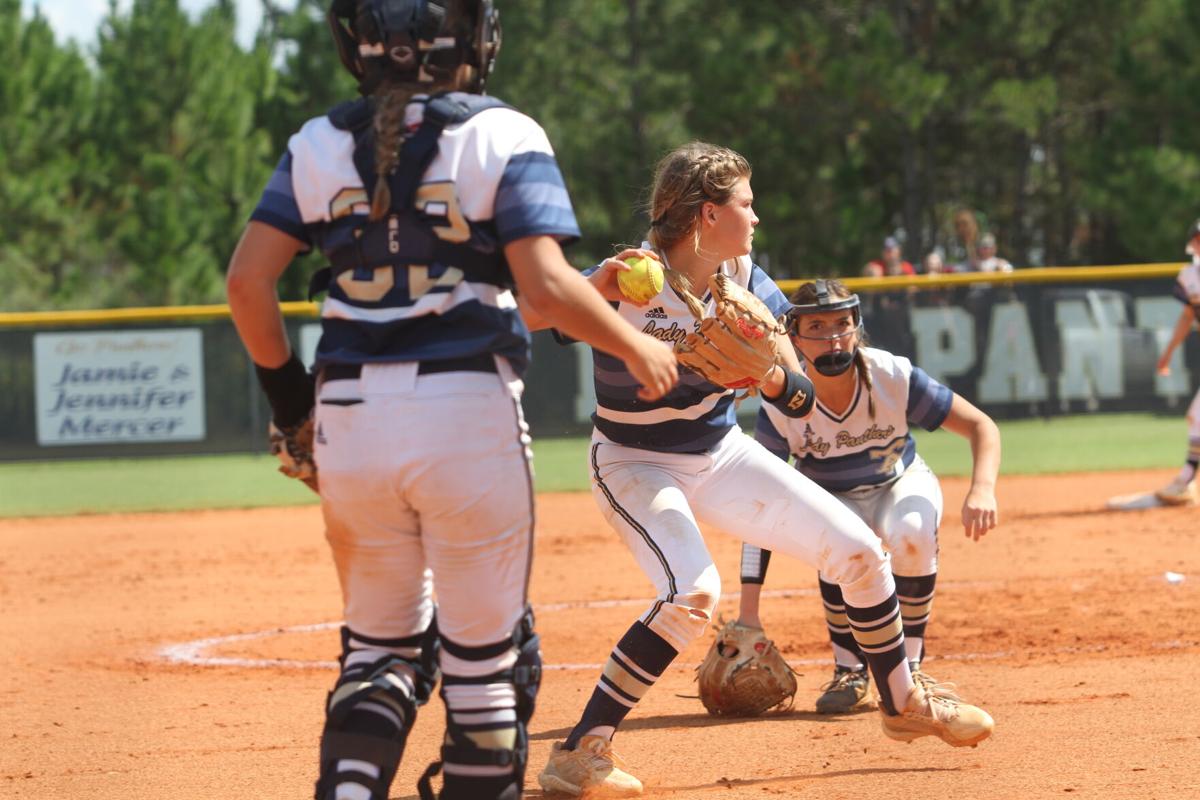 Madi Hartsfield comes in from third to throw out Madison Bashlor on a sacrifice bunt in the second game. 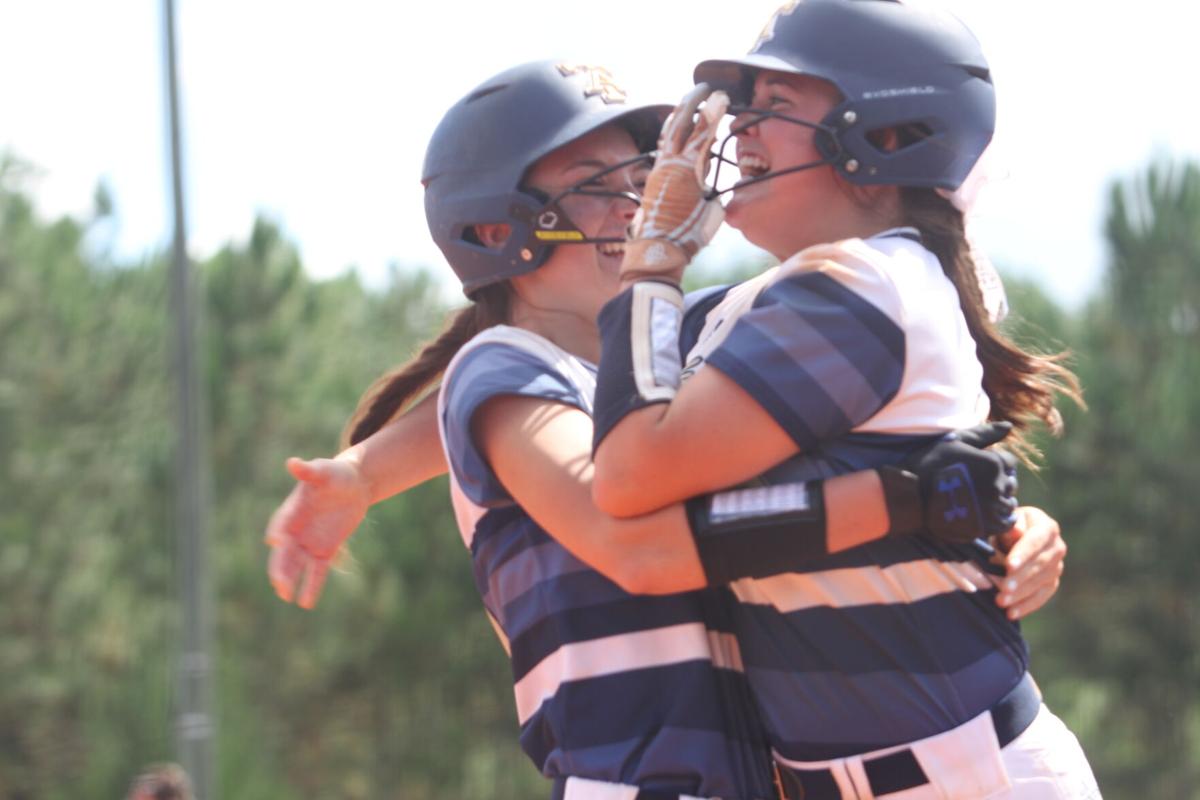 Pyper McCard and Ali Strenth hug after Strenth tripled, then came all the way around after an error. McCard also scored on the play. 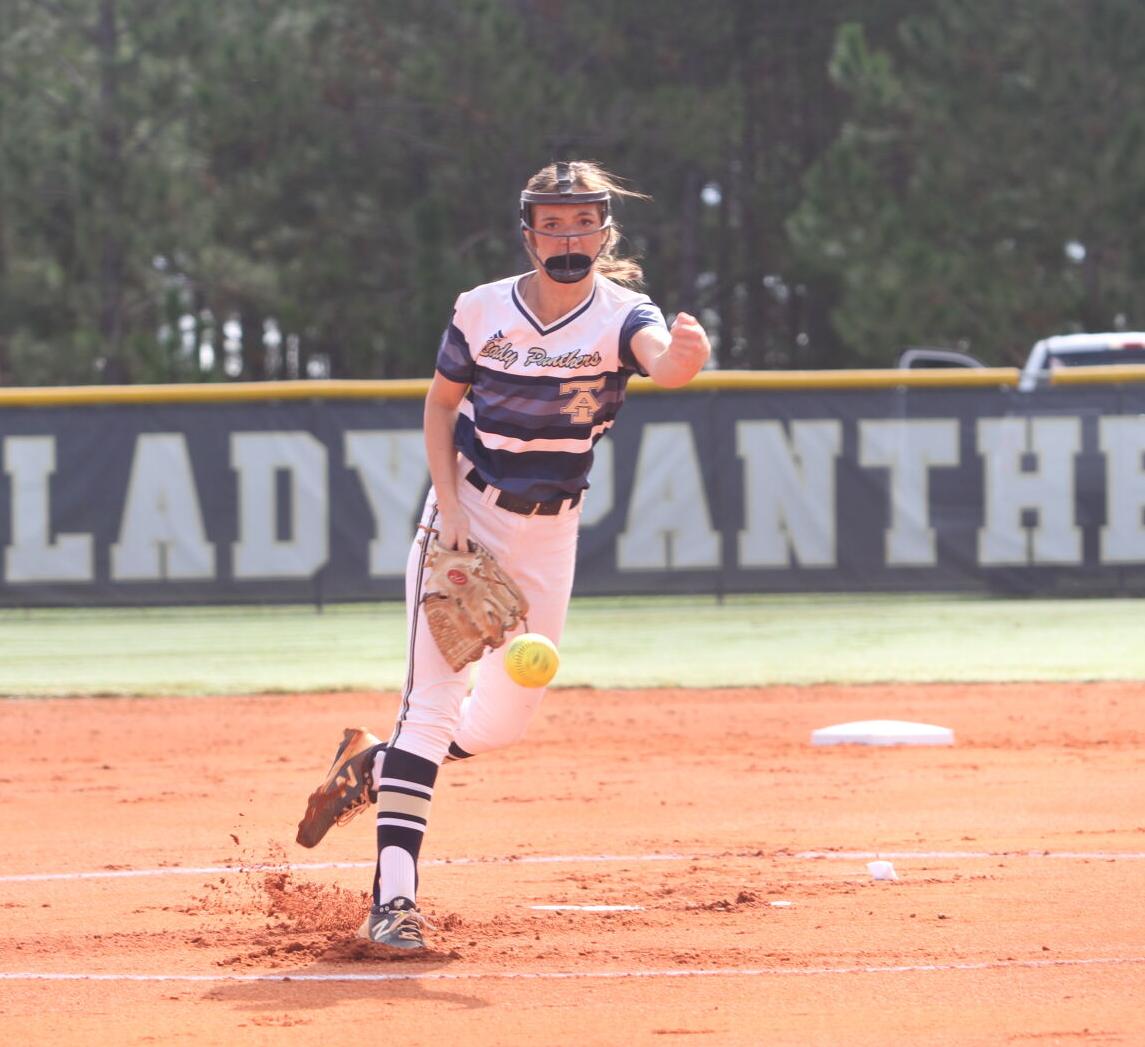 Pyper McCard pitches in the first game against Pinewood. She struck out 10 and allowed three hits in a 5-0 victory.

Madi Hartsfield comes in from third to throw out Madison Bashlor on a sacrifice bunt in the second game.

Pyper McCard and Ali Strenth hug after Strenth tripled, then came all the way around after an error. McCard also scored on the play.

Pyper McCard pitches in the first game against Pinewood. She struck out 10 and allowed three hits in a 5-0 victory.

CHULA - Tiftarea Academy has a happy conundrum coming up in a week: hosting a cross country meet and the final four for the GISA Class AAA state softball tournament. The Lady Panthers put Tiftarea in that spot Saturday by sweeping Pinewood Christian, 5-0 and 15-7.

Head coach Rob Flick called the victories a total team effort for Tiftarea, who has lost just once this year.

Pinewood was unable to keep up with Pyper McCard in the opening contest, one that saw McCard strike out 10. In the second game, the Lady Patriots found a new problem: keeping up with the sheer amount of Tiftarea runs.

The teams were tied at 3-all after two innings before the Lady Panthers' offense went into overdrive.

Elli Bryan started the inning with a triple to center. McCard hit a grounder that was fumbled, scoring Bryan. Ali Strenth belted the second triple in three batters - this one to right - and she followed McCard home after an error on the throw back to the infield.

The bases were now clear, but Tiftarea wasn't done. Laura Ann Jones singled up the middle with one out and, after an error and wild pitch, she and Mackenzie Matthews were at first and third. Caroline Heard grounded out, scoring Jones.

Up 7-3, they got even more comfortable with a three-run fourth.

McCard and Strenth were on base with consecutive singles when Madi Hartsfield stepped to the plate. Hartsfield roped a double past shortstop, driving in both. An error off Jones' bat expanded the lead to 10-3.

Pinewood nibbled at the lead in the fourth and fifth, one run in each.

Any potential for the visitors to make it uncomfortably close, however, evaporated in a five-run sixth.

A Jones single scored Strenth and Hartsfield. Both had gotten on base via errors. Hannah Grace Murphy had a single, scoring Matthews, who had reached base on a walk.

Heard, Murphy and Isabel Fernandez filled the bags shortly after. Bryan kept them loaded after earning an RBI walk. McCard made it a 10-run lead with a sacrifice fly before Pinewood escaped.

The Lady Pats needed three runs to escape the run rule in the bottom of the sixth. Katelin Smith and Middleton socked solo homers to center, but McCard buckled down to get the third out on a strikeout, ending Pinewood's season.

Tiftarea was the road team in the second game, per playoff tradition. Thus, even both teams scored three in the second, the Lady Panthers briefly had a 3-0 lead.

Hartsfield and Jones stood on base when Matthews attempted to sacrifice each up a base. Her bunt was so good Matthews wasn't caught and the bases filled for Heard.

"She's been swinging the ball well all year," said Flick about Matthews. "It just came up, back to back times we had first and second and she had two good bunts and she ended up running them out." (Matthews also laid down a perfect sacrifice in the first game.)

Heard grounded out, scoring Hartsfield for the game's first run. With two down, Fernandez increased it to 3-0 with a two-run single.

Blocker walked with the bases loaded in the bottom half, bringing in Long to get Pinewood on the scoreboard. A fielder's choice and an error tied the score at 3-3.

McCard, finishing up her first full doubleheader of the year, struck out three in the second game. Five of Pinewood's seven runs were earned.

Flick said he had been working on stretching out McCard in recent weeks, pitching her on back-to-back days when possible. "The Westwood game was the closest thing we've had so far," he said. Westwood had been suspended because of weather and had the last innings made up in Chula before the two teams played a game immediately after. "She was ready."

Gracie Fox exited the game for Pinewood in the first inning after taking a pitch off the elbow.

McCard gave up only three runs in the first game to go with her 10 strikeouts.

Pinewood had one serious opportunity to score. Runners were at first and third with no outs in the third, but when Middleton rolled a ball to Strenth at shortstop, Strenth not only chased the runner back to third, but caught up and tagged her for the out.

That play was followed with Fernandez fielding a sure base hit at deep second and throwing out the batter. McCard ended the pressure after the ball was hit softly to her in the circle.

McCard sat down the side in order from the 4th-6th, then the first two of the seventh.

Two Tiftarea runs crossed in the second, one in the third and two more in the fifth.

Hartsfield and Jones started the rally with singles in the second. Matthew joined them on a bunt that mystified Pinewood infielders. Heard picked up a pair of RBIs with a single for the quick 2-0 lead.

A walk to Strenth and double by Hartsfield off the centerfield wall extended the advantage to 3-0.

McCard was well into her groove when she received two further bits of insurance in the fifth.

Fernandez hit an infield single and stole second to lead off the frame. She was nearly left there as the next two hitters made outs.

Strenth gave her company after she was hit by a pitch. Hartsfield followed with a fly to the outfield that was dropped. Both runs scored.

The sweep served as a bit of revenge of sorts for Pinewood's wins over Tiftarea in the state baseball finals last spring and for winning in football a few weeks ago.

"We get one back for football and baseball," said Flick.