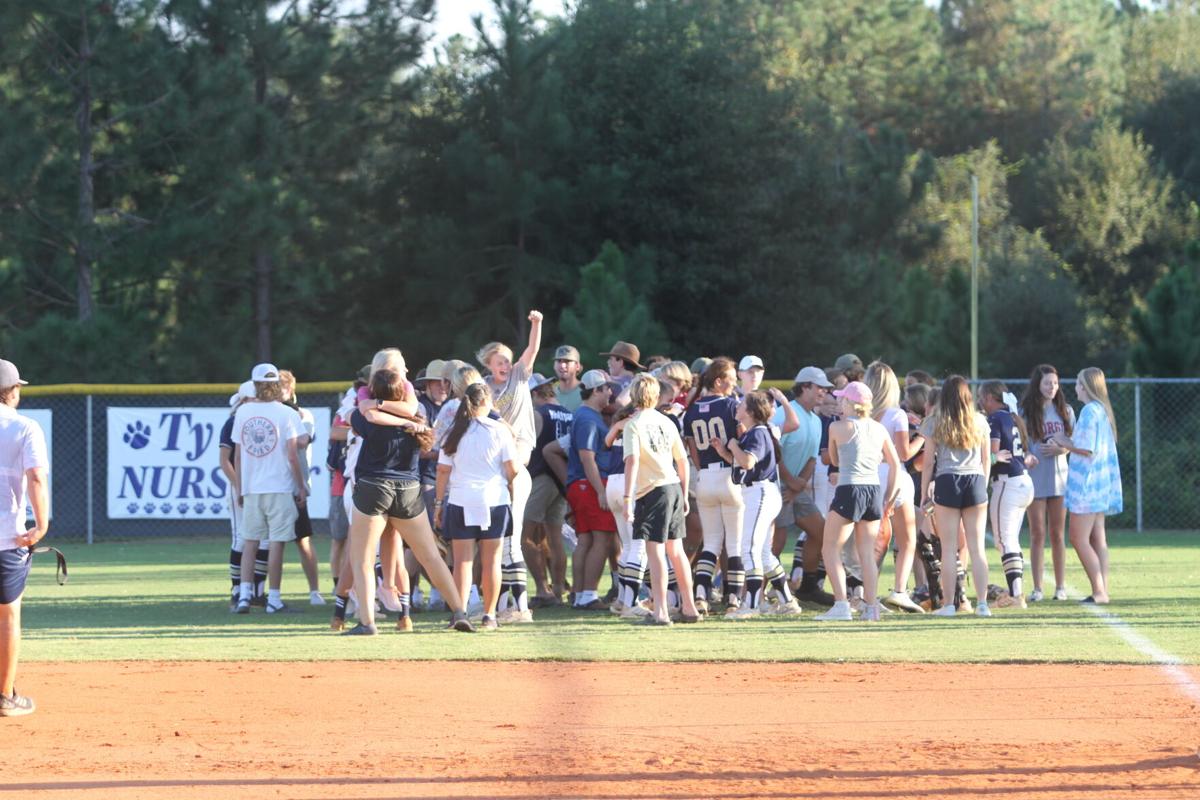 Fans and players celebrate Tiftarea's sweep in the outfield. 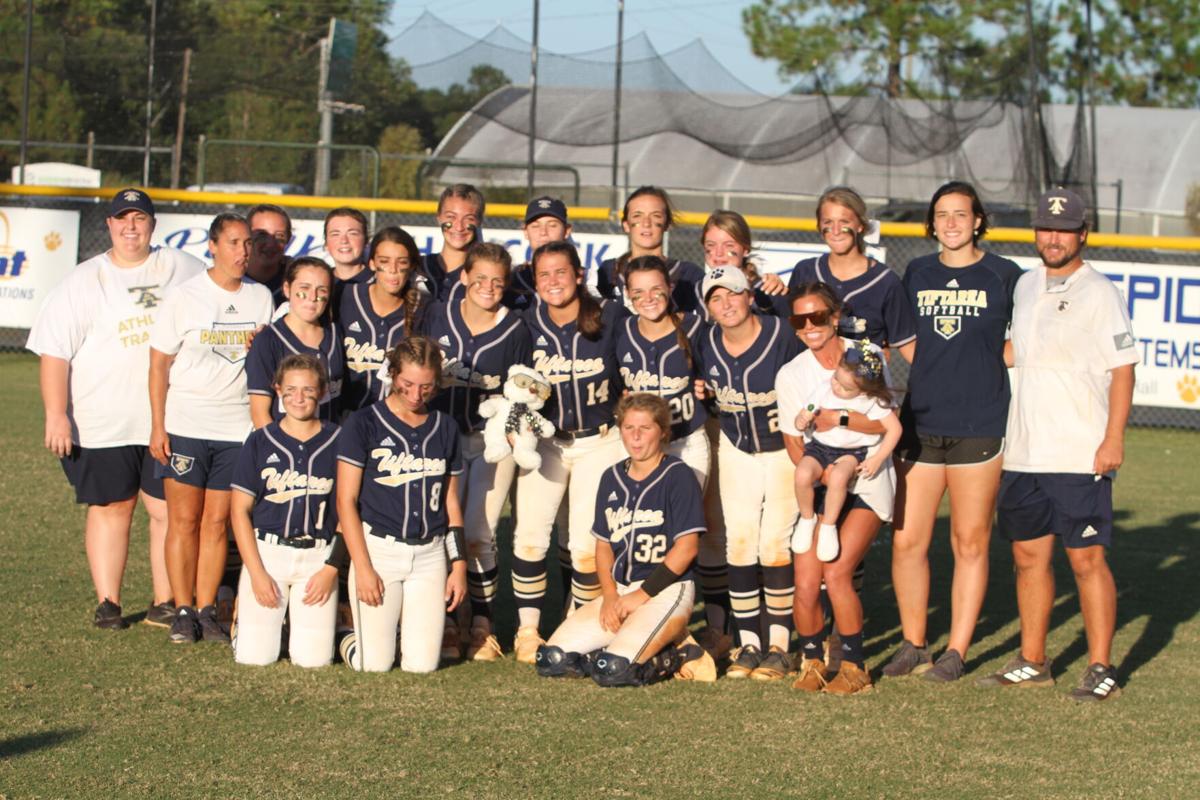 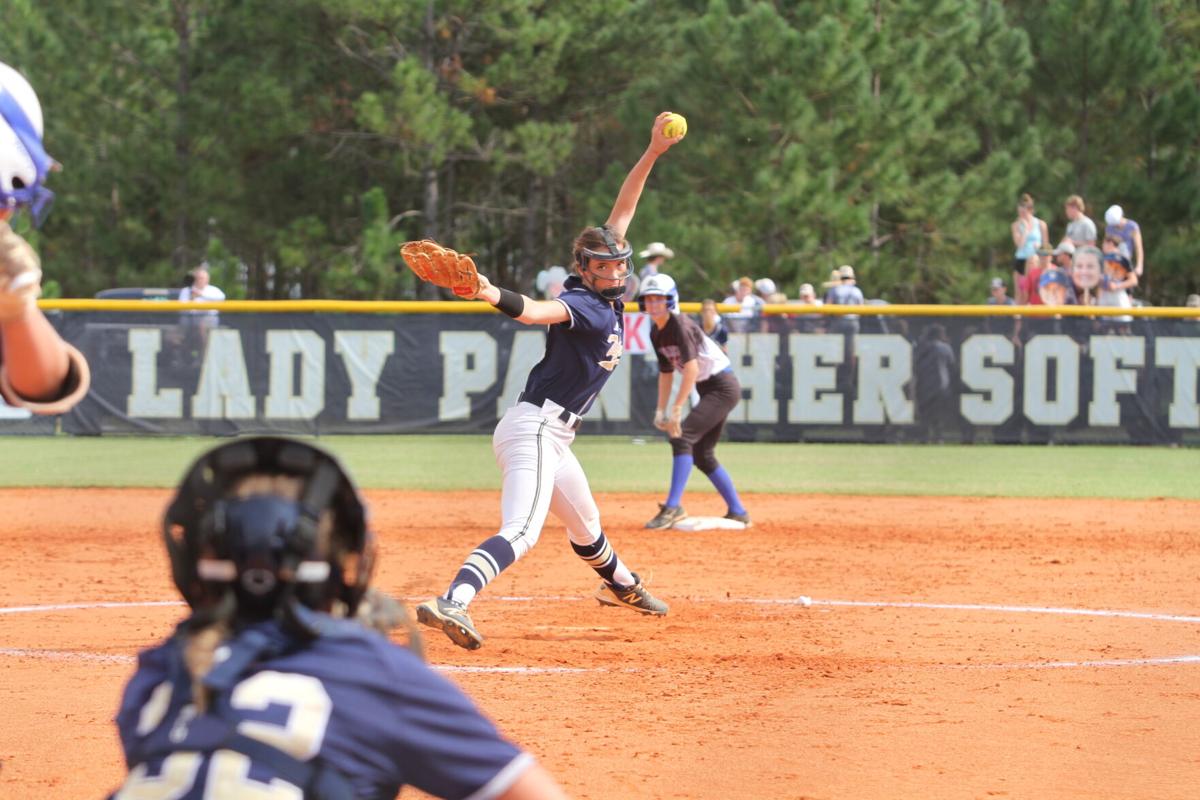 Pyper McCard deals from the circle. 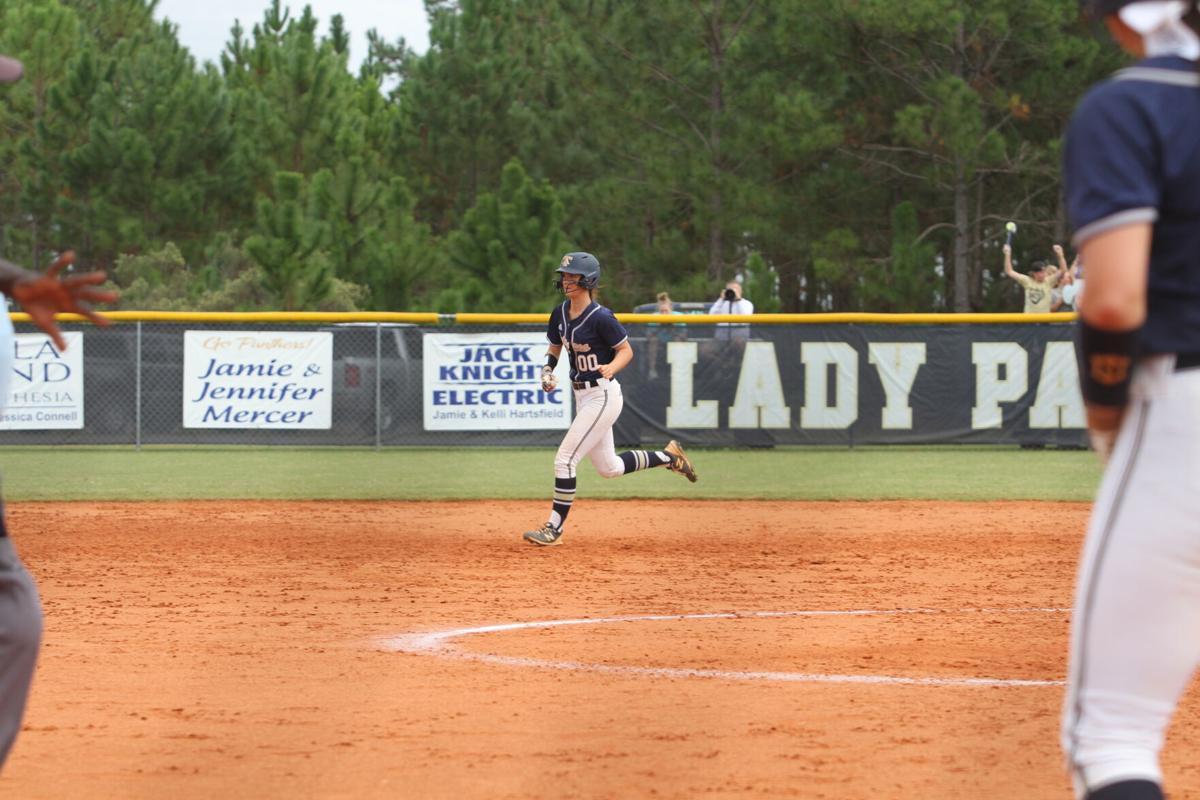 Pyper McCard rounds second following her solo home run against Trinity Christian in the first game. She hit another in the second half of the doubleheader. 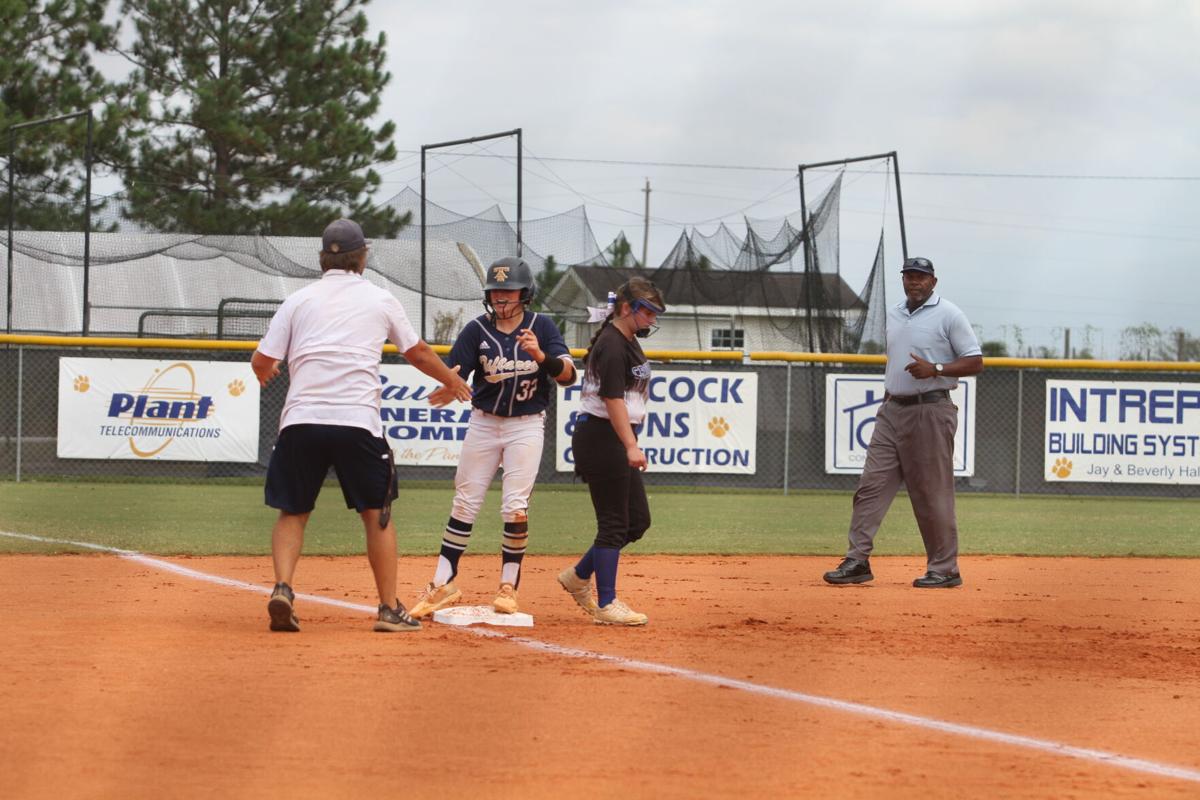 Elli Bryan gets a low-five from head coach Rob Flick following a game one triple.

Fans and players celebrate Tiftarea's sweep in the outfield.

Pyper McCard deals from the circle.

Pyper McCard rounds second following her solo home run against Trinity Christian in the first game. She hit another in the second half of the doubleheader.

Elli Bryan gets a low-five from head coach Rob Flick following a game one triple.

The Lady Panthers (20-1) won 5-4 and 9-1 over Trinity and will play in next Thursday's state championship against Westfield in Dublin.

Head coach Rob Flick agreed it would be hard to imagine a more perfect day for his team, who were outstanding in the circle, on defense and at the plate. Pyper McCard was in total command in the circle, giving up no earned runs and winning both games. She struck out 13 and walked only one Trinity hitter.

McCard homered in each game and Elli Bryan hit her first of the year. Coming into the doubleheader, Tiftarea had only hit four long balls during 2021.

The second game was especially brilliant for the Lady Panthers.

McCard hit a blast to right-center in the first inning and Caroline Heard singled in Madi Hartsfield in the second for a quick 2-0 advantage.

Trinity scored its lone run in the bottom of the third, Isabella Moss reaching on an error, then scoring on a base hit by Madison Lowery. The score was 2-1 at that point and Trinity might have had the opportunity to tie, if not jump ahead, in the fourth, but the hosts' defense shut down that opportunity.

Madison Coleman singled to center start the fourth, but a ground ball went straight to Ali Strenth at shortstop. She touched the bag for one out, then fired across to Hannah Grace Murphy to complete the double play.

Only one more runner for the Lady Crusaders reached base after the double play. By then, the lead expanded considerably.

Tiftarea struck for three in the top of the fifth.

Heard started the rally with a hit to left. After Murphy moved her up with a sacrifice bunt, Isabel Fernandez singled past third to make it 3-1.

The next batter was Bryan and she muscled up on a pitch to send it over the left field fence, scoring Fernandez and herself.

Bryan almost hit another one out later in the game, but Flick said the wind kept the ball in the park.

At 5-1, the game was out of reach, but the Lady Panthers had more scoring to do.

A single by Fernandez and a double by Bryan put runners at second and third with no outs for McCard, who drove both in with a hit of her own. Strenth tripled to left, bringing in Kensie Law, running for McCard. The final tally was Strenth scoring on a wild pitch.

Tiftarea had 12 hits for the game, three from McCard and two each from Fernandez, Bryan and Heard. McCard drove in three runs.

McCard's home run served as the winning RBI and run for the opener. Getting there was a longer journey.

Tiftarea was on the scoreboard first, a two-spot in the second a single tally in the third.

Hartsfield singled and, taking advantage of Trinity not immediately jumping on the ball, slid into second safely. Laura Ann Jones blooped a hit over first to put two runners on base.

A wild pitch scored Hartsfield for the first run and, when Jones was going back to third on a ground out by Heard, a throw from first to the third base bag went wild. Jones trotted home and the lead was 2-0.

Bryan hit a one-out triple to right center in the third and made it 3-0 on McCard's grounder to first.

The Lady Crusaders came back with a fury in the fourth.

Adelaide Moss and Lowery singled. An error off the bat of Ellie Quick followed, loading the bags with no outs. McCard struck out a hitter, but the third strike was wild and Moss scored.

Lowery came in on a second error. When Mollie Hodges singled in Quick and Maci Canady, Trinity went up, 4-3.

Tiftarea tied the came in the bottom of the fourth in a most unusual way: an infield fly.

Hartsfield started with a triple. She had to pause when Jones' pop on the infield was dropped, and then pause again when looked back to third on Heard's squeeze attempt. No throw went to first and a runner was at every base.

Murphy hit a fly behind second. It was also dropped and the runners all moved forward, Hartsfield scoring and Heard scooted to second.

The inning was initially ruled over as the umpires called an infield fly and a force at second, as the fielder and ball beat Heard to that bag. Flick asked the officials to reconsider and, after a lengthy discussion, Hartsfield's run was counted.

The infield fly rule, which is present when there is a force play at third and fewer than two outs, results in the batter being automatically out if an infield fly is called by the umpire and runners stay at their bases. If the ball dropped after that call, runners can move ahead at their own risk and a fielder has to tag a runner for an out, as a force play is no longer present.

Trinity had a scoring opportunity in the top of the fifth when Adelaide Moss got a hit with one out. However, the next batter grounded to McCard. She wheeled around to Strenth at second, who tossed to Murphy at first for the inning-ending double play.

McCard caught up with a Trinity change-up in the bottom of the fifth. It soared over the right field fence. Tiftarea was back on top.

Allie Baggett earned a walk in the top of the seventh with two outs, but McCard got a fly to Strenth to polish off Trinity.

Hartsfield had two hits for the Lady Panthers. McCard had two RBIs.

In Saturday's other semifinal, Westfield no-hit John Milledge Academy 8-0 before exploding to a 13-5 victory in the clincher. Westfield is 24-1 this season.

The Lady Panthers won't be intimidated.

"We both tie our shoes the same way, we both put on our pants one leg at a time," said Flick.

This will be Tiftarea's first appearance in the state finals since 2005.