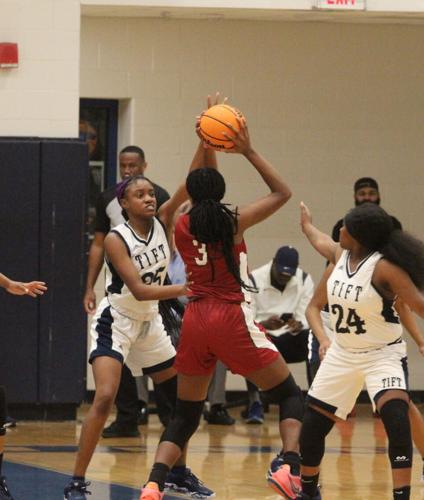 Tift’s Faith Hillmon (25) cuts off Otaifo Esenabhalu’s path to the goal while Braxton Gipson (24) keeps an eye on any potential passes. 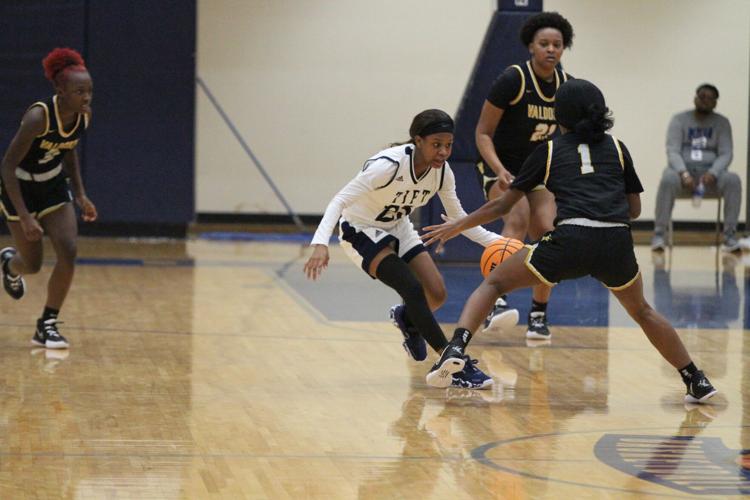 Mya Cushion (23) leads Valdosta one way before dribbling another during the second half.

Tift’s Faith Hillmon (25) cuts off Otaifo Esenabhalu’s path to the goal while Braxton Gipson (24) keeps an eye on any potential passes.

Mya Cushion (23) leads Valdosta one way before dribbling another during the second half.

TIFTON — For those who have missed basketball action, the wait is over. This upcoming weekend is filled with events for the Tift County Blue Devils and Lady Devils.

The Blue Devils host Midnight Madness Nov. 11 at The Palace. The Lady Devils will be going a step further, however. Their first actual game is Dec. 12 at Hillgrove at 3 p.m.

Head coach Julie Conner is reporting outstanding practice sessions for her crew, which is coming off a Sweet 16 bid in 2022. “It’s really been going great,” she said.

The lineup will be similar to that of a year, but with some changes. Shakiria Chaney, a 1,000-point scorer, graduated, as did others. Two players moved to another school system.

The Cushions — O’ashia, Jimeylah and Jimmya — will provide a lot of the Lady Devils’ offense. Jimmya will be the primary point guard, said Conner. She also pointed to Trinity Hill, Faith Hillmon, Jakembre Beckhom, Jalaya Miller and Makala Horne as well. All of these players will help out in the posts.

“Faith and Jakembre are looking so good in the post,” she said. “Like a 1-2 punch.” She said everyone on the roster works well together. “A great team group. Their spirit is wonderful.”

There is hope that Janie Ragsdale can be healthy enough to help out. Ragsdale is tallest Lady Devil at a listed 6-foot-3. Tift will have Makayla Bryant back from injury. She’ll also have Shermaine Sutton on the roster after a lengthy absence. Sutton can contribute speed and defense.

A freshman contributor will bear a familiar name: Jaziyah Johnson. She joins the roster one year after a player with the same name graduated. Conner said Johnson has speed and played well during the summer.

Twelve players make up the varsity roster, a number Conner thinks is almost perfect. It may increase, of course, as junior varsity players show their skills during the year.

While the season is starting, it will be some time before the Blue Devils and Lady Devils play a true home game. After Hillgrove, the Lady Devils will play at Lowndes as part of a tip-off tournament Nov. 21-22. Conner is not sure who they will play yet. Currently, Peachtree Ridge is penciled in on the MaxPreps schedule for Nov. 22.

The boys and girls play for the first time together on Dec. 2 at Cook. They also have a road game at Valdosta Dec. 3. Finally, on Dec. 13, will they be at home for games against Westover. (Tift’s boys will play at home solo against Coffee on Dec. 9.)

Tift will be in a new region this year, Region 1-6A. They will retain one of their former 1-7A opponents on the non-region slate, that being Colquitt County. Tift is not currently scheduled to play Lowndes or Camden County, but it’s possible they will be matched up with Camden in the Lowndes tournament.

The Lady Devils will play in a Christmas tournament at the end of December.

Region gets started Jan. 6 at Veterans. Thomas County Central, Northside of Warner Robins, Houston County and Lee County make up the remainder of 1-6A.