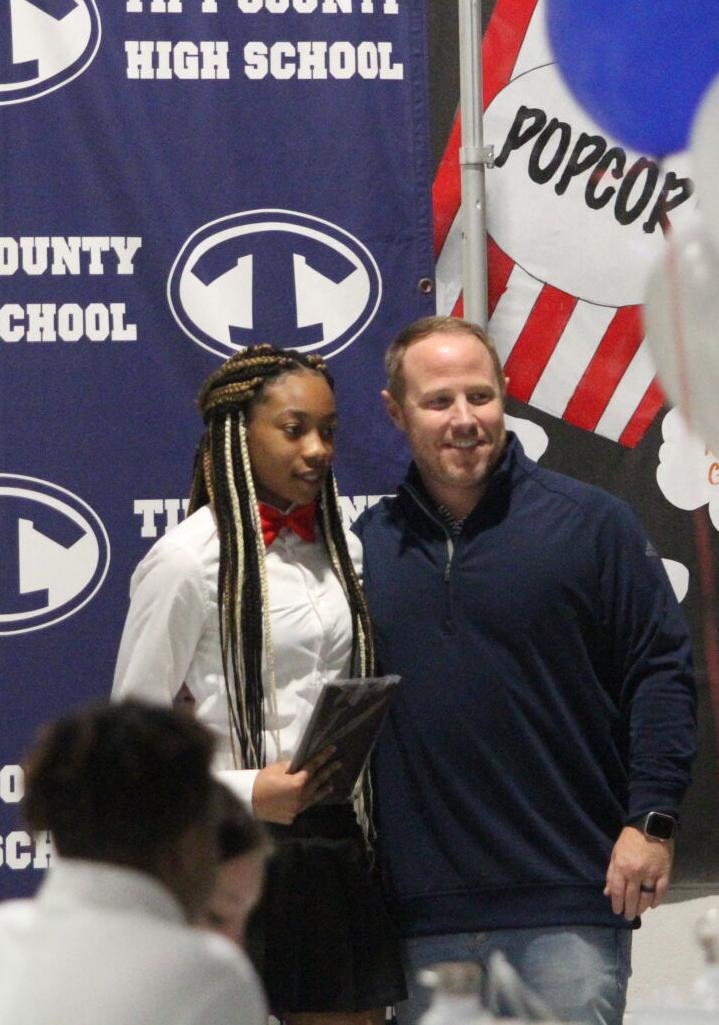 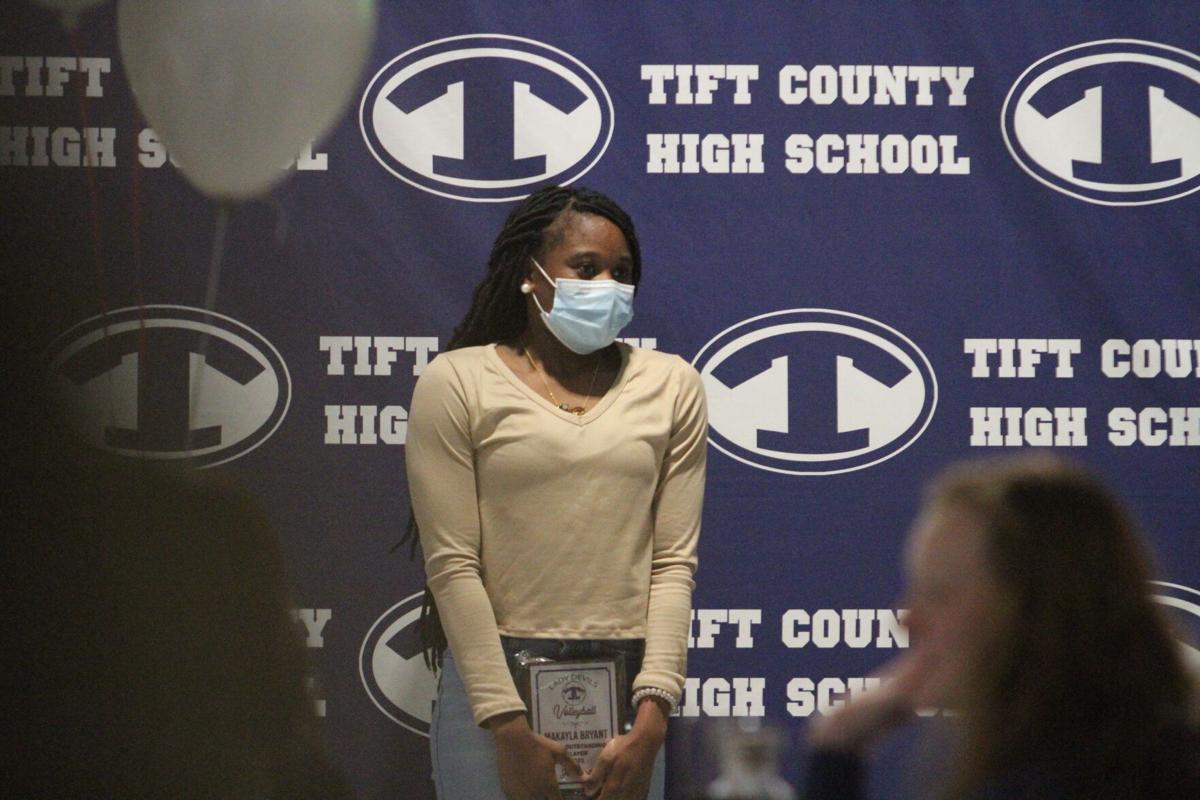 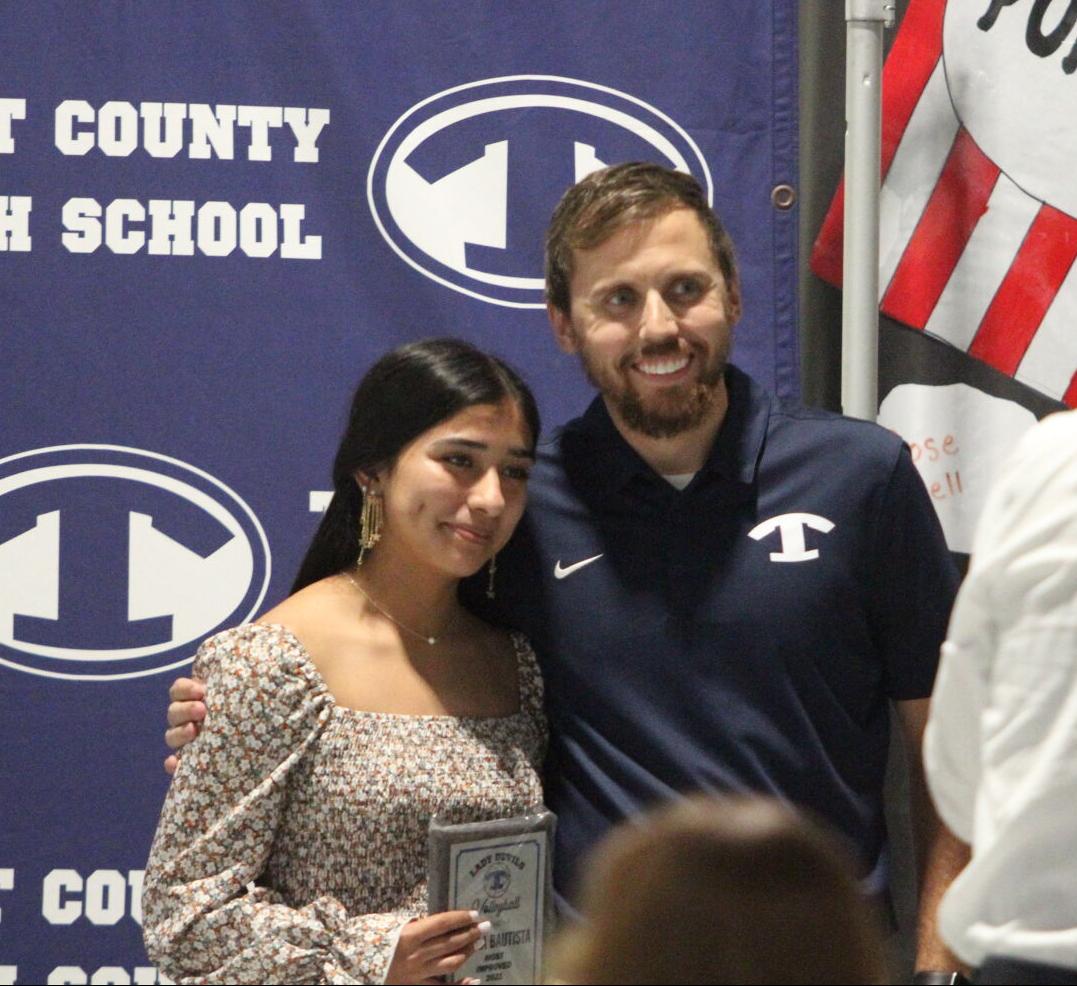 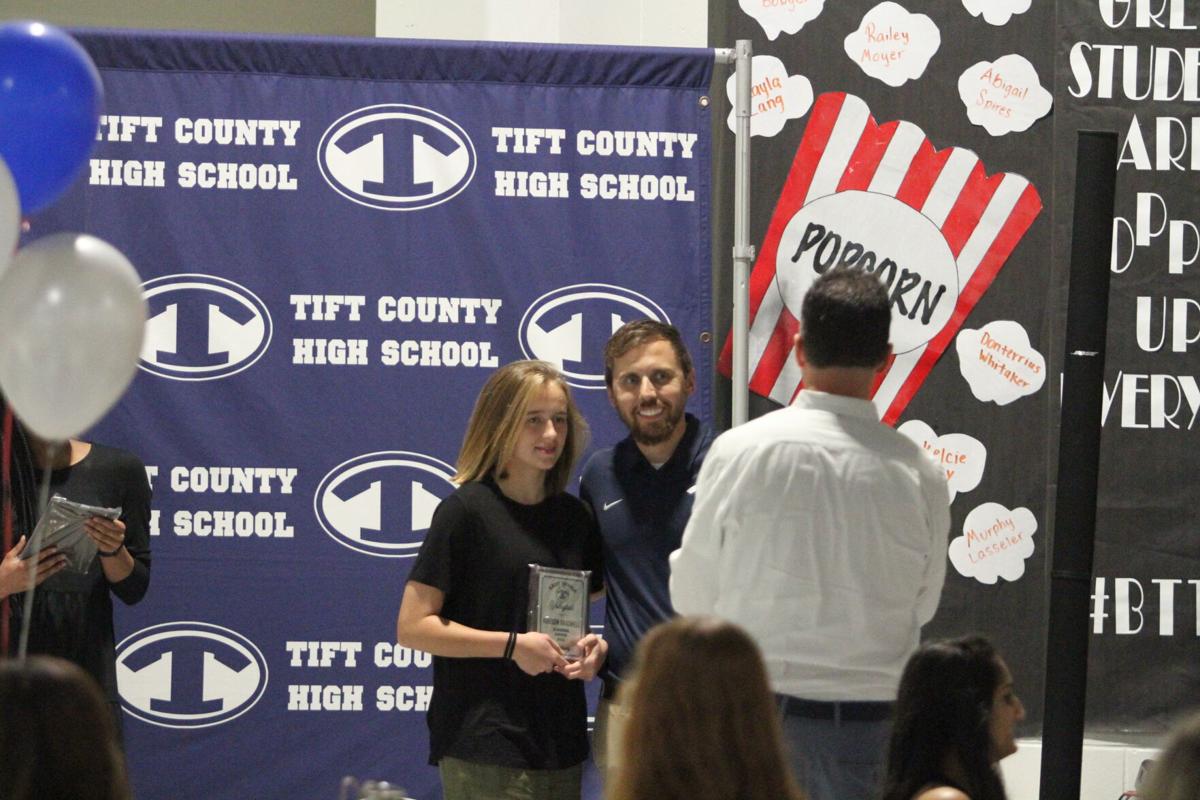 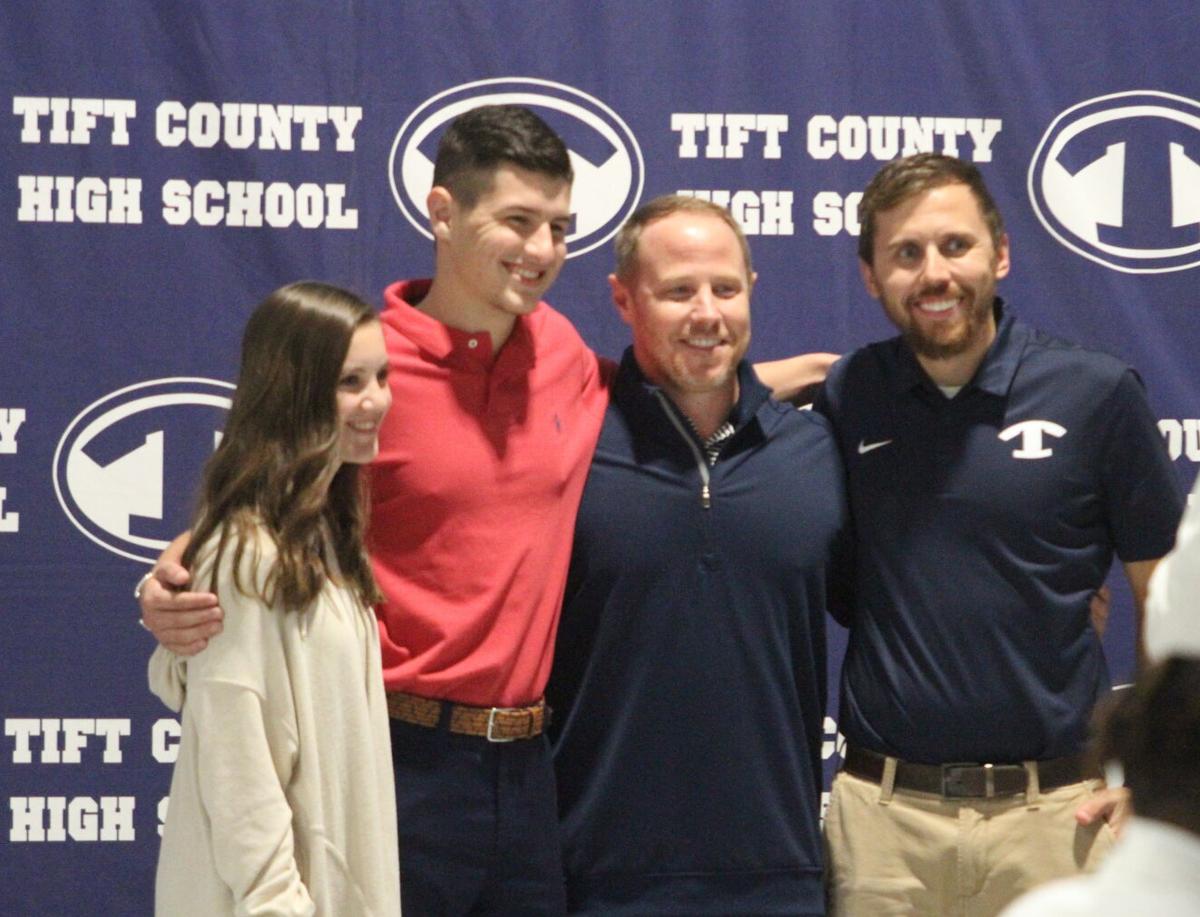 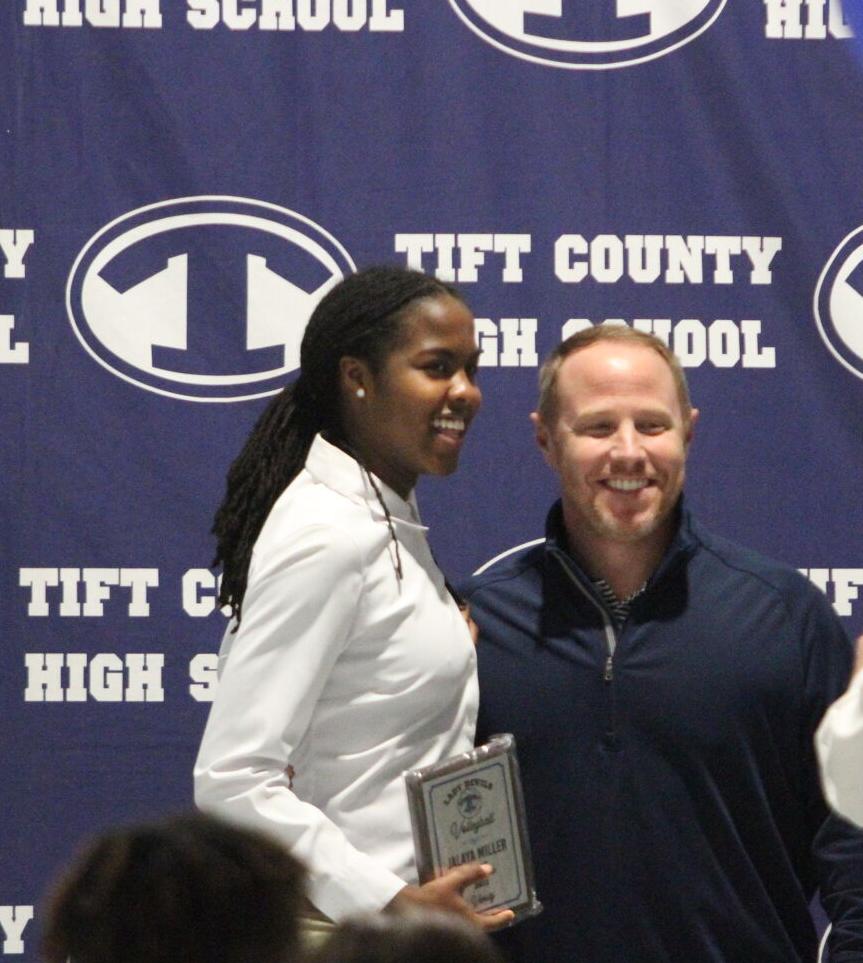 Jalaya Miller, 2021's Most Improved, was the lone freshman to earn a varsity letter this season. 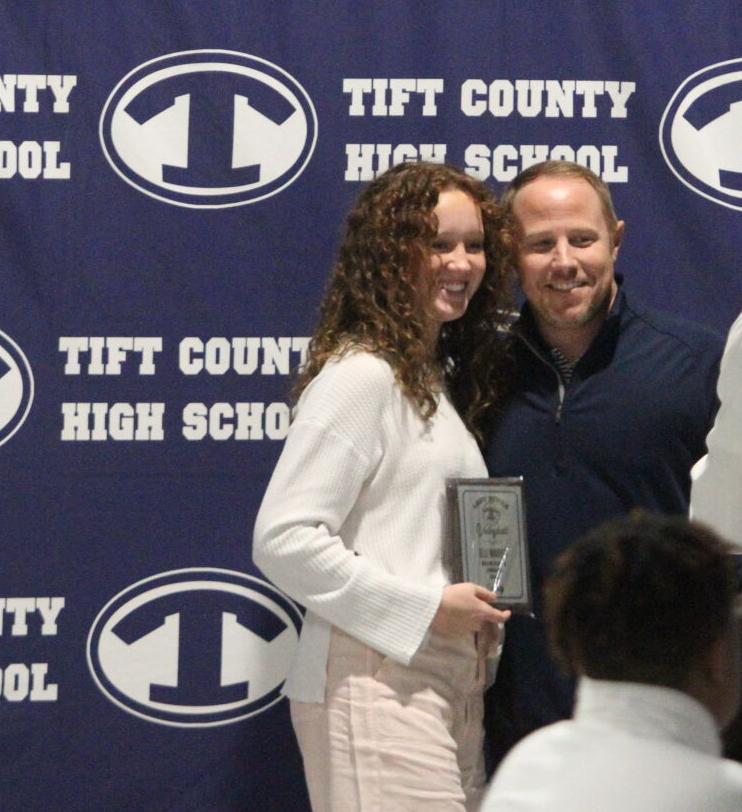 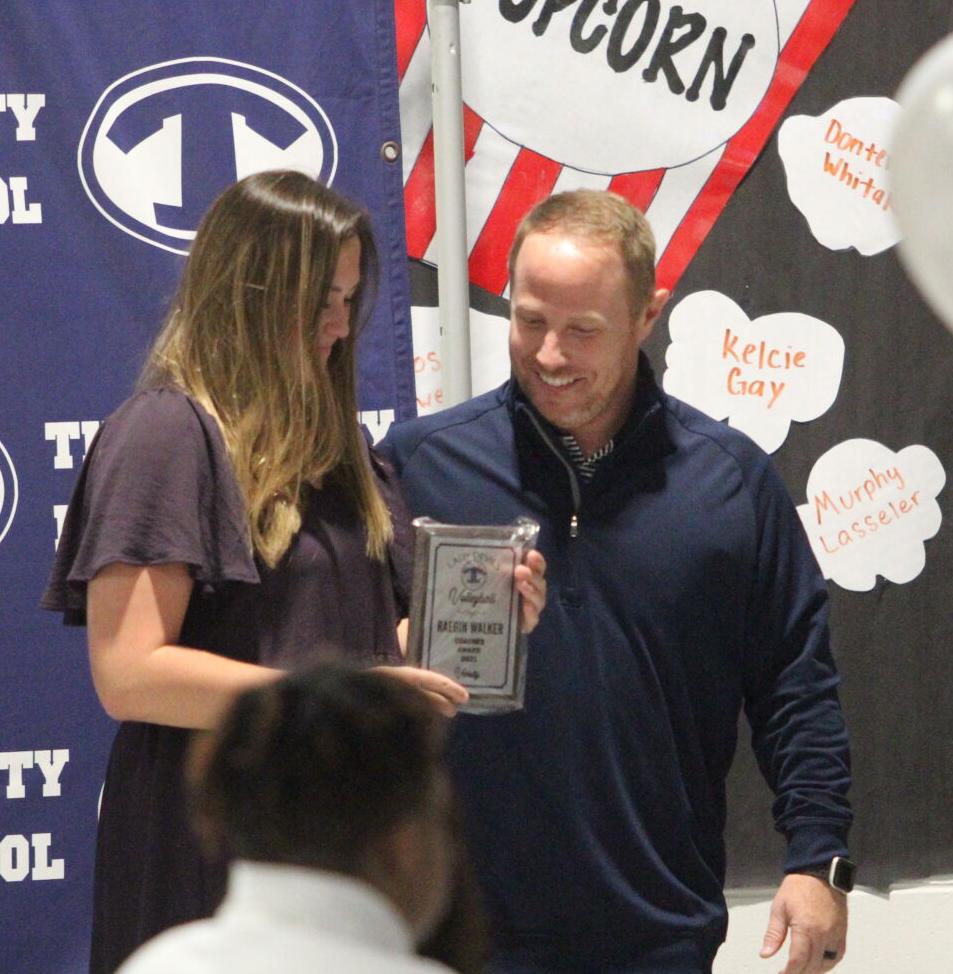 Raegin Walker, the varsity Coaches' Award winner for this year. 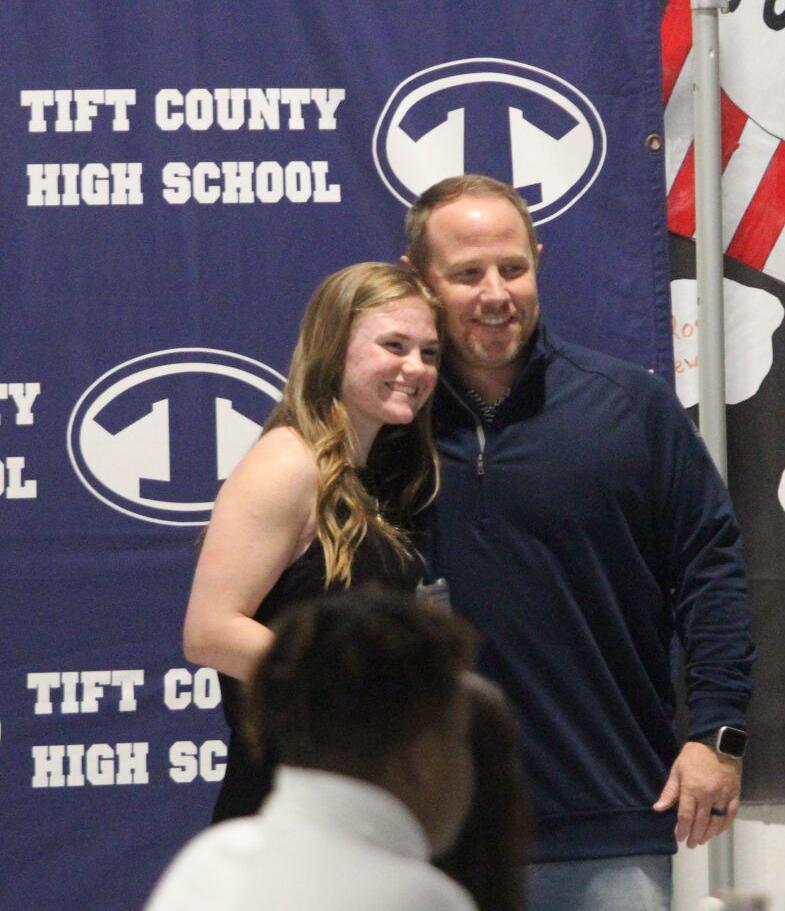 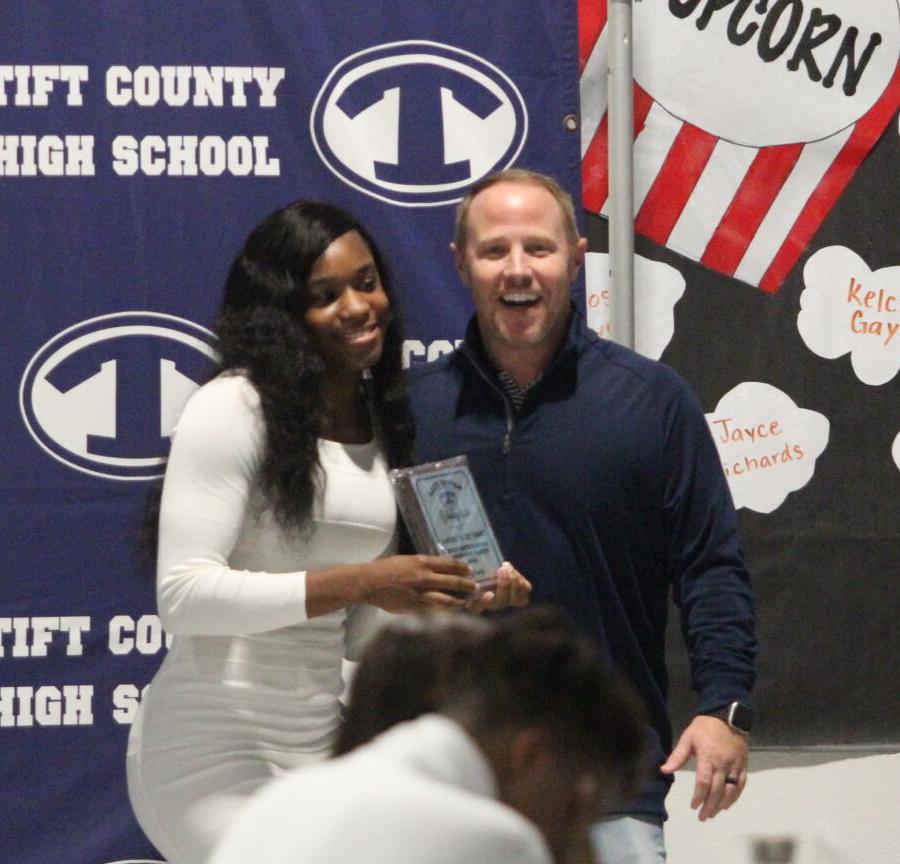 Shakiria Chaney gets down to Caleb Dawson's level after earning the Best Offensive player award. 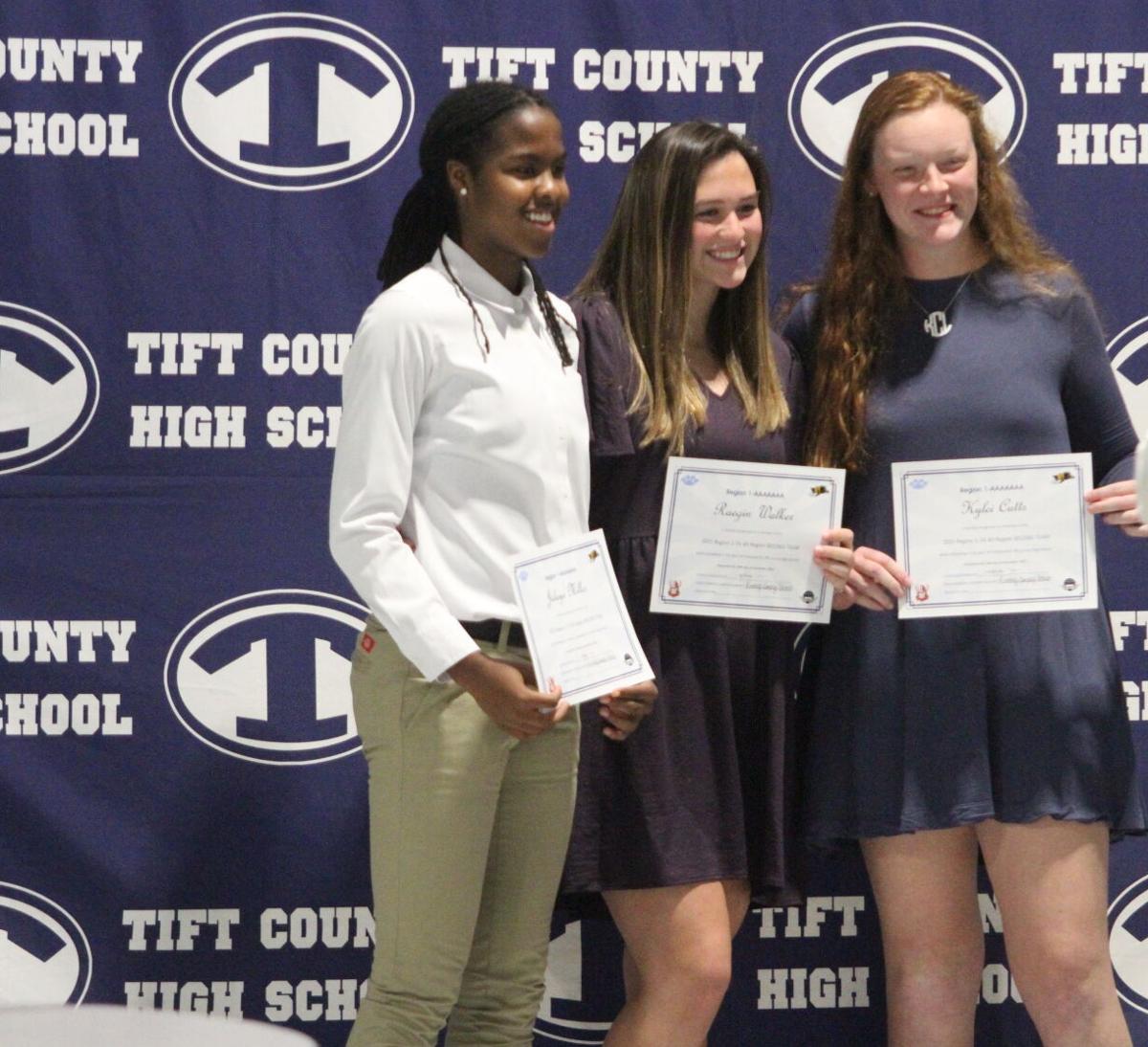 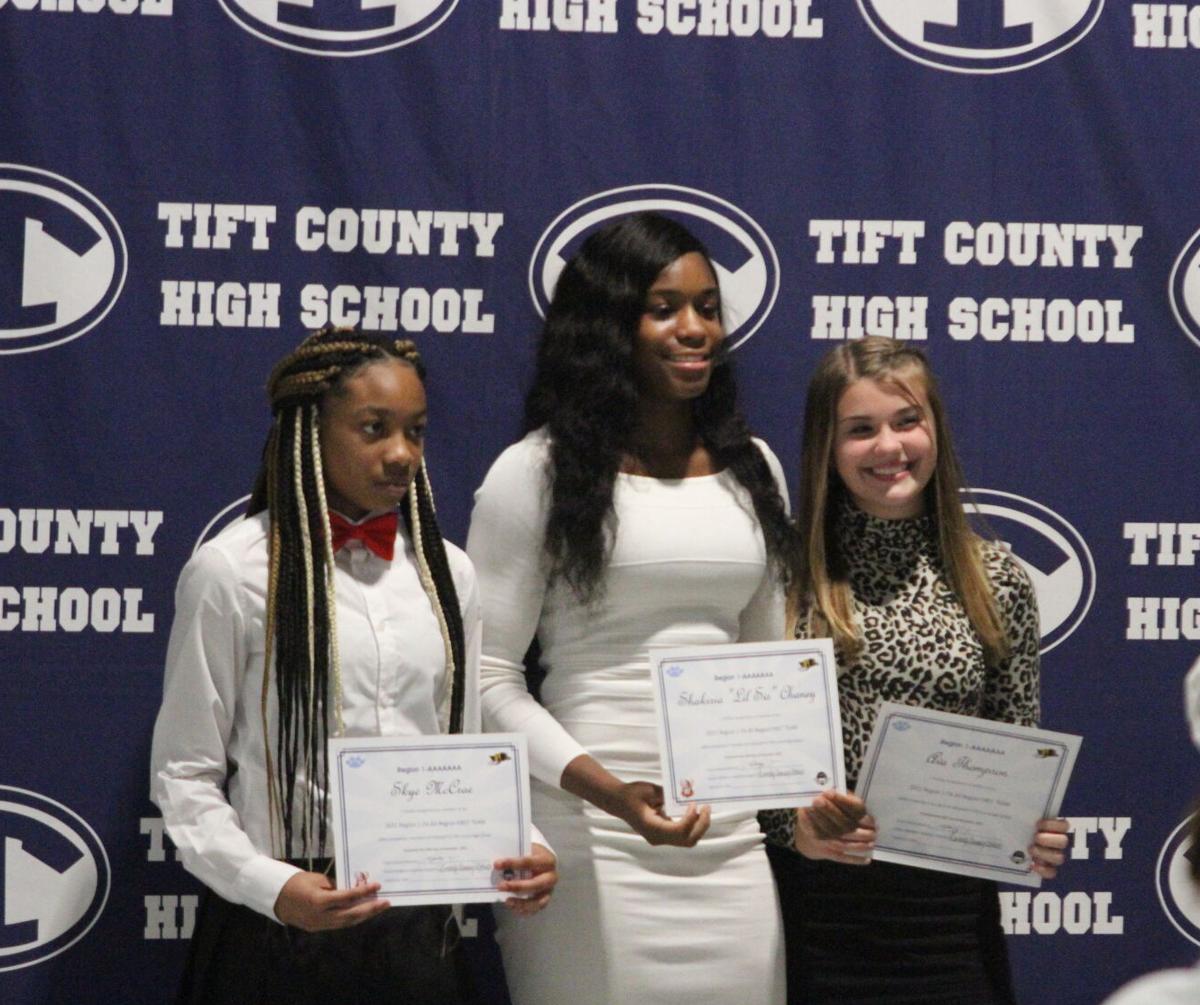 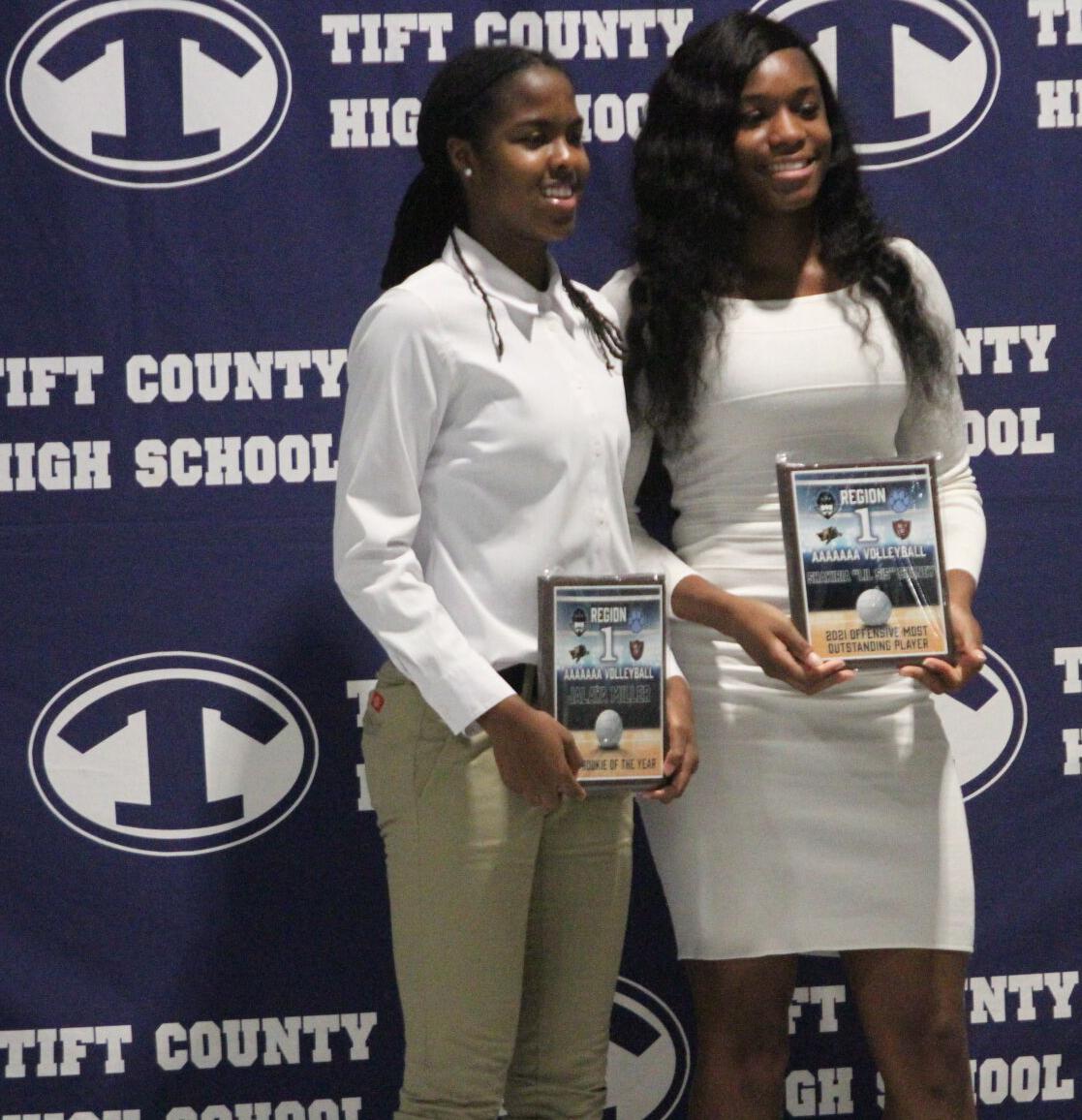 Jalaya Miller and Shakiria Chaney were Region 1-7A Rookie of the Year and Offensive Player of the Year, respectively. 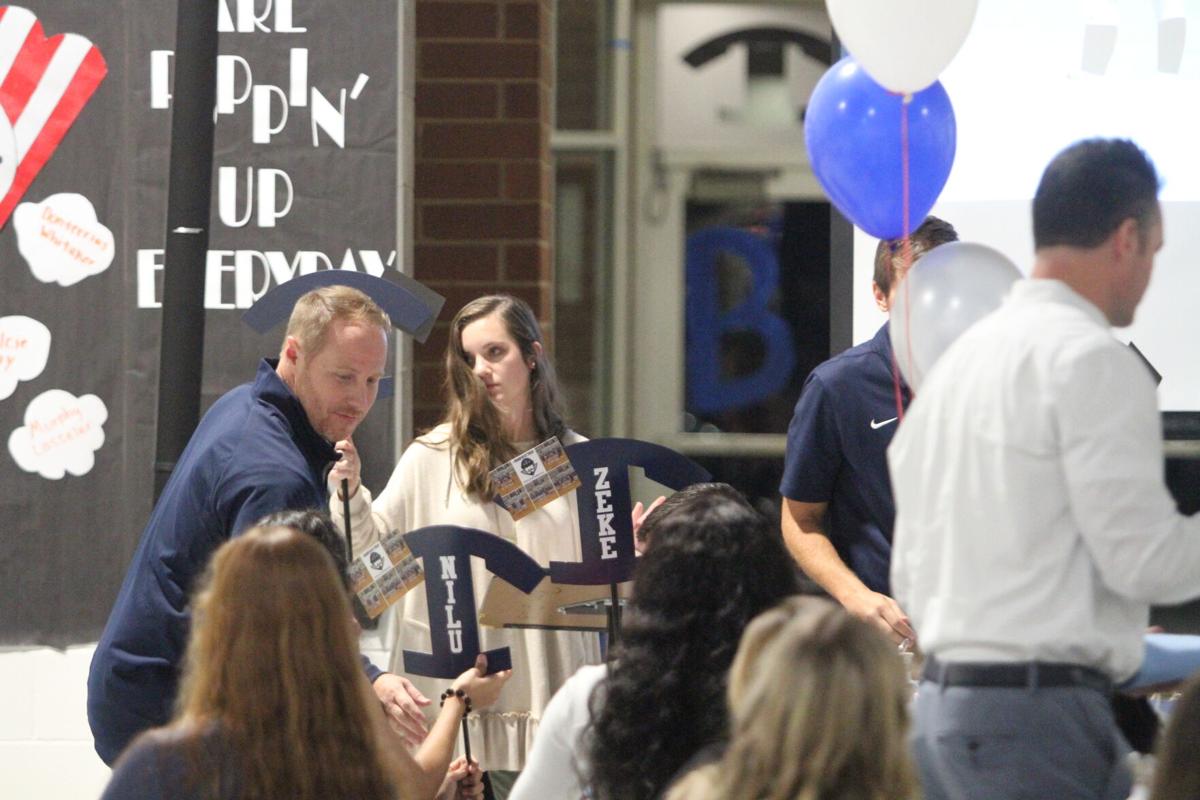 Jalaya Miller, 2021's Most Improved, was the lone freshman to earn a varsity letter this season.

Raegin Walker, the varsity Coaches' Award winner for this year.

Shakiria Chaney gets down to Caleb Dawson's level after earning the Best Offensive player award.

Jalaya Miller and Shakiria Chaney were Region 1-7A Rookie of the Year and Offensive Player of the Year, respectively.

TIFTON — Tift County’s varsity and junior varsity volleyball teams were honored with a banquet on Nov. 17 at the high school.

Head coach Caleb Dawson expressed thanks to his family for their support, as well as to his assistants, Jay York and Kim Dempsey. He also thanked school officials, parents, the booster club and sponsors for their contributions.

Dawson called up Dempsey to give statistics for the year.

Dawson called up players by year in school, finishing up with the three seniors, Sky McCrae, Nilu Patel and Shakiria Chaney.

Before varsity awards were announced, coaches honored Zeke Shivers, the lone high school male involved with the program, as a student manager. Dawson described Shivers’ role nearer to “student assistant coach” and that he trusted Shivers to help run practices. An “incredible, incredible young man,” said Dawson. He said he prayed he own son would be half the young man Shivers is.

Most Improved for the Lady Devils went to Jalaya Miller. “This young lady came a long way,” said Dawson. “She is going to be a superstar for us.” Elli Warren got the Blue Devil Award, which Dawson said was the embodiment of being a Tift County Blue Devil.

The Coaches’ Award was earned by Raegin Walker, a player Dawson said coaches felt was the heart of the team. It was a tough decision, he added, saying he feels every year that multiple players deserve the honor.

Abby Goddard merited Most Outstanding Defensive Player. “I think she did an amazing job,” he said. “She laid it on the line every night for us.” There was no doubt as to whose name would be Most Outstanding Offensive Player — Chaney. “She was incredible for us this year,” also mentioning her fire and determine.

Dawson said that at the beginning of the year, he would not have anticipated the winner of Most Outstanding. “She went from having her worst athletic season last volleyball season to hear teammates voting her Most Outstanding player, Miss Skye McCrae.”

Next up were the region awards. By finishing second in 1-7A, the Lady Devils earned three selections on both the second team and the first team. Second team selections were Miller, Walker and Kylei Cutts. First team honorees were Chaney, McCrae and Ava Thompson.

Dawson talked about the growing pains of the season. “I think I have one timeout left,” he said, joking about the frequency of their use in 2021. “We have a lot of young girls. As much as I would like to win everything right now, I’ve come to find out I can’t win because of a single year,” referring to 2020’s region championship. The team is learning how to win.

“Girls, I challenge you to be better, to get better throughout the year.” Tift is planning on a four-day volleyball camp next June, the Gold Medal Square Camp. In addition, the Lady Devils are planning their first ever youth volleyball camp, for young ladies in 5th-8th grade.

Dawson wrapped his segment with adoration of the seniors and he encouraged them to keep calling.

Assistant York, who leads the junior varsity team, summed up the season with one word: thankful.

York called each junior varsity player to the front, describing each with a different word. With each word, he said, “Together we make Tift volleyball.”

Junior varsity awards saw Makayla Bryant win Most Outstanding Player. “We could always rely on her to come up with a great pass or a great hit,” said York. Most Improved went to Laura Bautista, Cailynn Hammock earned the Blue Devil Award, and the Coaches’ Award went to Addison Braswell.

At the end of the banquet, Laura Cutts presented gifts to the coaches and seniors, as well as awards for who brought in the most sponsorship money in 2021. Those honors went to Heidi Robinson, Lexie Lane and Kylei Cutts.