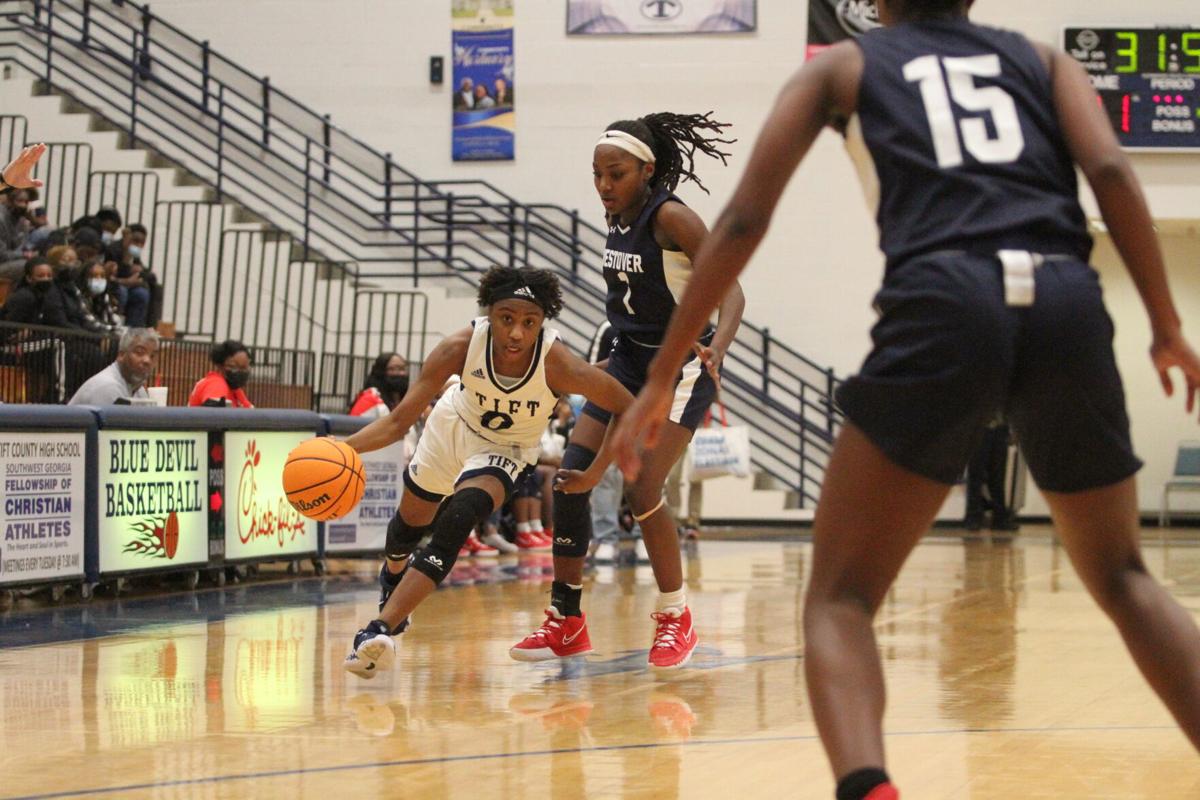 Tamyra Carter (0) races past a Westover guard during Saturday's second half. 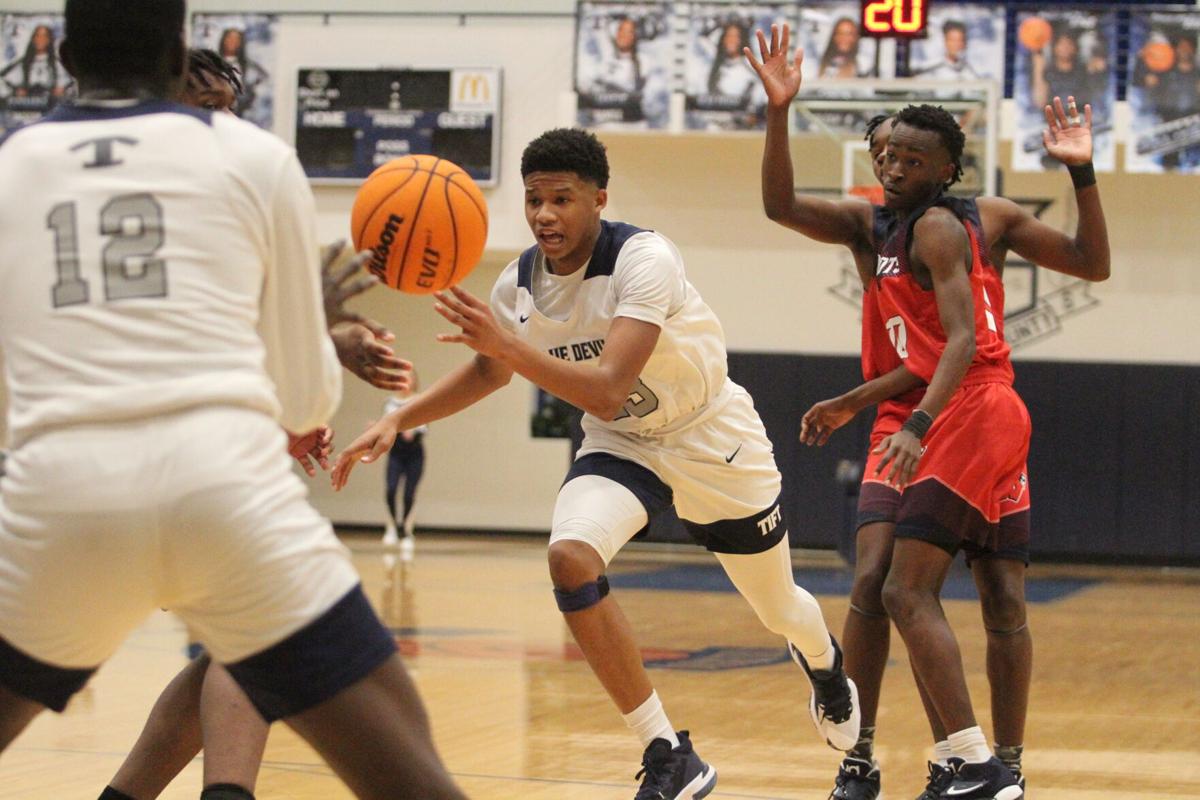 Tift's McKyler Horne (23) pushes a pass ahead to a wide open Christian Jones under the basket for two easy points. 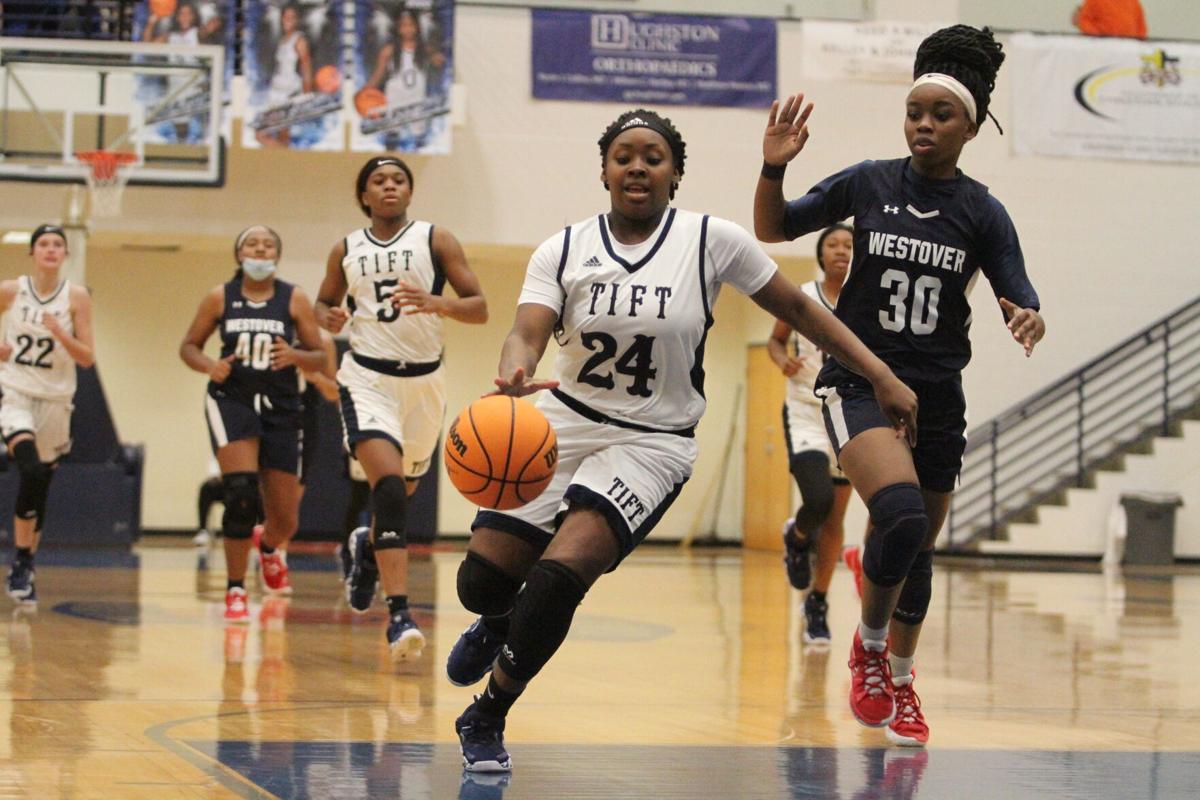 Braxton Gipson (24) prepares to polish off her steal with a layup. 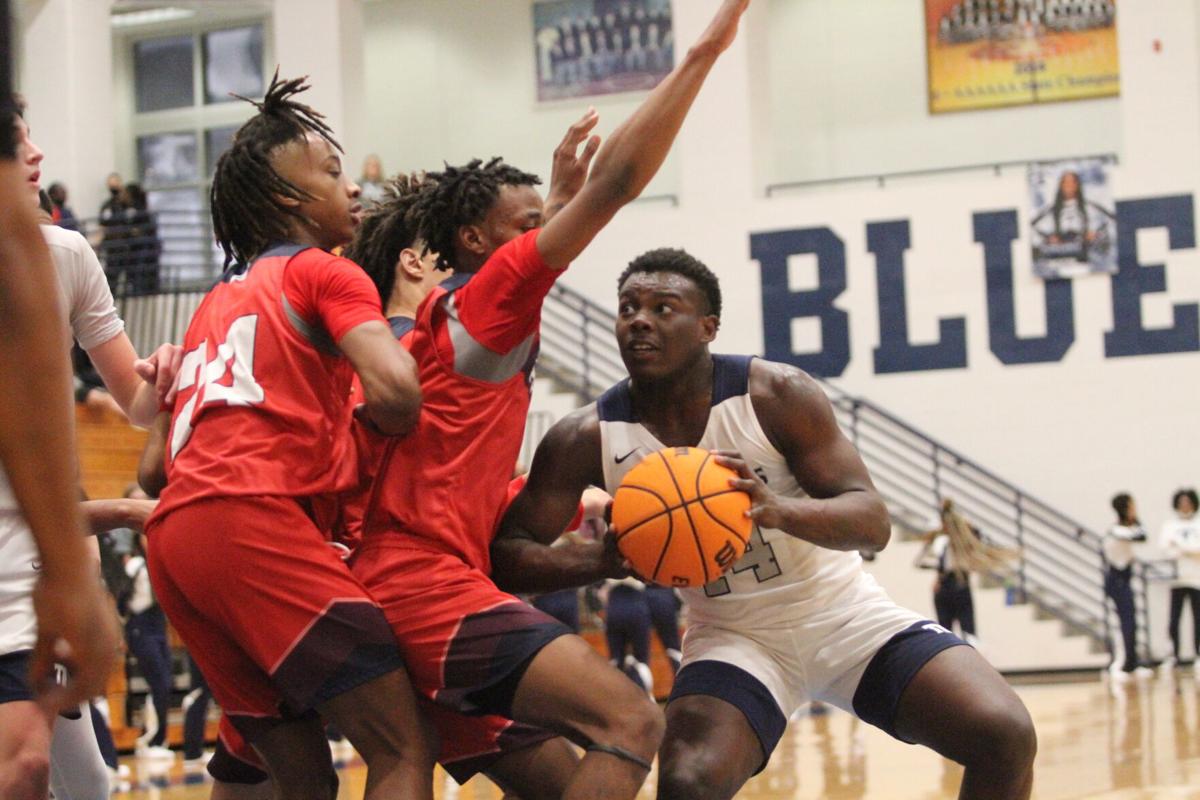 The Blue Devils only suited up six players Saturday, but that did not stop any of them from being aggressive, such as when Bryant Timmons (14) challenged three Patriots in the paint.

Tamyra Carter (0) races past a Westover guard during Saturday's second half.

Tift's McKyler Horne (23) pushes a pass ahead to a wide open Christian Jones under the basket for two easy points.

Braxton Gipson (24) prepares to polish off her steal with a layup.

The Blue Devils only suited up six players Saturday, but that did not stop any of them from being aggressive, such as when Bryant Timmons (14) challenged three Patriots in the paint.

TIFTON - Tift County basketball split a doubleheader Saturday night at The Palace, but both outcomes might be a bit surprising.

The Lady Devils not only conquered the only South Georgia that has defeated them this year, they blew out Westover, 58-29.

Head coach Tommy Blackshear opting to only suit up six players against the No. 4 and undefeated Patriots, fell 54-45 in a score even closer than it appeared.

In December, the Westover Lady Patriots defeated Tift in Albany, 47-44, a game that Tift head coach Julie Conner said was not her team's best.

Saturday's game may not also have been the Lady Devils' best, but it would be hard to imagine many better ones.

The Lady Devils made 12 three-pointers against Westover, which Conner thinks might be a school record. Six of those shots fell in the first quarter. Shakiria Chaney and Braxton Gipson each made two, with Caitlyn Burgess and Skye McCrae hitting one each.

If the rain of threes weren't enough, Faith Hillmon ended the first quarter by scoring off an offensive rebound. The Lady Devils were ahead 18 points, 24-6.

The two sides played the next two quarters evenly, each scoring 17 points.

After Chaney made it a 20-point lead, the Lady Pats scored nine of the next 13 in the game, four from Tejah Lawson to get slightly closer at 30-15.

But any chance the visitors might have had to go into the half with a statement was not to be. It was Tift's night and Tift's statement; Tamyra Carter knocked down a three with 33 seconds left. Westover was right back where they started, down 18, 33-15.

Lawson scored six in the third and again sliced it down to 15 points. Once more, Carter was there to end any potential, nailing a three to close the quarter.

Westover did not have any responses in the fourth. Carter's trey began a 16-0 streak, one that featured two threes from Mya Cushion and nine points from Gipson, which also included a three.

Tift's three-point barrage was led by Gipson, with three. Chaney, Burgess, Cushion and Carter all made two, with McCrae with the other.

During halftime of the girls game, Tift's latest Hall of Fame class was recognized, with Blackshear introducing each inductee.

Westover entered with a 12-0 record, a 58-34 win in Albany, a shot clock and just six bodies on the other side of the floor. It should have been a recipe for disaster. It was not.

Despite all of the disadvantages, the Blue Devils played aggressively throughout. When the fourth quarter rolled around, Tift only had five players available because of a foul out. They finished with four, but only because they had to foul to try to regain possession.

Tift even briefly had the lead.

Christian Jones knocked down a single free throw to go ahead 1-0, then put them ahead 3-2 on an assist from TeShun Bryant.

Westover jumped back ahead and when the Patriots got six points from Keshay Walton during a 9-0 run to go ahead 11-3, it looked like the end result was going to be a runaway.

Though outnumbered, Tift's six weren't on the floor to roll over.

Will Clark started the second with a three off an assist from McKyler Horne. A minute later, Horne fed Jones for a basket under the goal. Westover got a bucket from Kemari Leverette, but Tift had found a rhythm.

Clark made a basket, then Davis Byrnes stepped back to knock down a three by the Westover bench. It was now 18-13 at 5:12.

Walton broke the streak with five more points, but when Bryant connected with a streaking Jones on a give-and-go at 1:01, they had narrowed it down to 25-21.

Kavon Johnson made a fadeaway three at the buzzer to send the Patriots into the break up 28-21. The shot might have served as momentum for a Westover rout in the second half, but the Blue Devils again jumped forward nstead of standing aside.

Byrnes was fouled on an offensive rebound attempt as the third quarter started and he made both free throws. Westover's problems only increased.

Bryant Timmons absorbed a foul when he knocked down a jumper from the free throw line at 6:42. Forty-six seconds later, the Devils had the ball again and cut it even closer after a technical foul was called on Westover.

Clark hit both free throws. Westover's lead was trimmed to 29-28.

Leverette made a three to give the Patriots slightly better footing. Byrnes scored directly on an inbounds pass to stick around at 32-30, but the visitors hit a surge.

Two minutes after Byrnes' basket, Walton made a free throw when he was fouled after stealing the ball. In between, the score had changed to 43-30.

Legs were beginning to tire for the Devils, but it was again not the end of the line. They finished the third on a 6-2 run, all free throws. Unfortunately, two of the free throws were at the expensive of a double foul (and second technical on Westover), one that fouled out Timmons.

Down 45-36, Tift now had only its men on the hardwood for the final eight minutes of the game.

The Patriots were ahead by 11 points 2:30 into the period, but then came a massive block by Horne, then one by Jones.

Clark made a free throw, then a three. Then, after Cameron Cromer scored, Horne dazzled the crowd with a reverse layup before making another two points with 2:14 left for a 51-44 game.

Westover had a turnover, but Tift couldn't capitalize. The clock ticked under a minute and the Devils, so cautious on fouling earlier, now had to do plenty of it quickly in hopes of getting the ball back.

One of these fouls cost them Bryant's fifth foul and the final 11 seconds were played with four men on the court. Walton made a jumper in the closing seconds for the final total.

Clark led the way with 13 points. Jones scored 10, Byrnes had 9, Horne scored 8, Timmons finished with 3 and Bryant with 2.

Tift's next game will be Jan. 14 at Colquitt County. The Blue Devils were originally scheduled to go to Cook Tuesday night, but athletic director Chris Martin said that game has been postponed until Jan. 18. Only the boys will play at Cook.