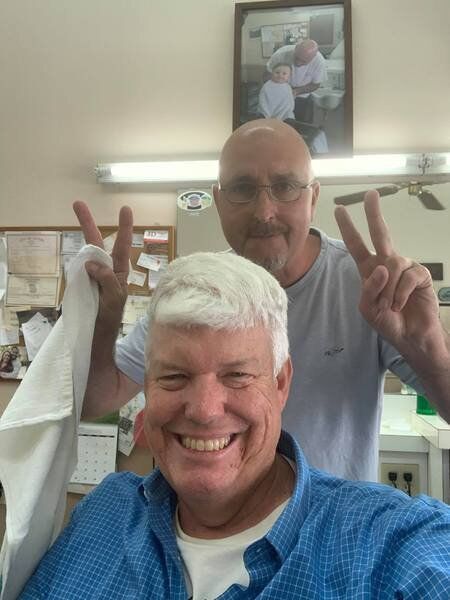 Submitted PhotoBob Kemerait, professor and extension specialist at University of Georgia, gets his hair shaved in support of Ula. 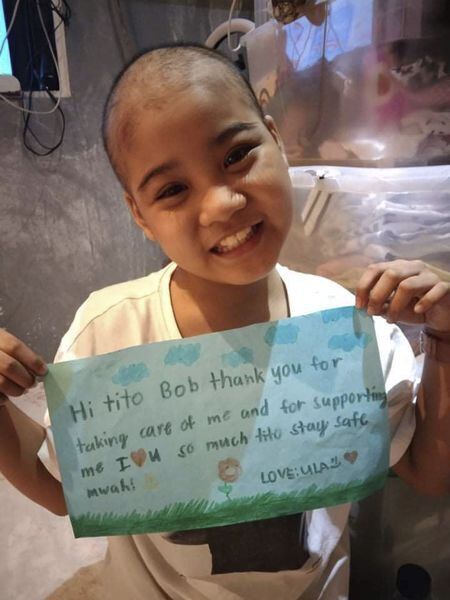 Submitted PhotoUla shares a note thanking Bob Kemerait for his and other South Georgia residents' help. The little girl lives in the Philippines and has been diagnosed with acute lymphoblastic leukemia. 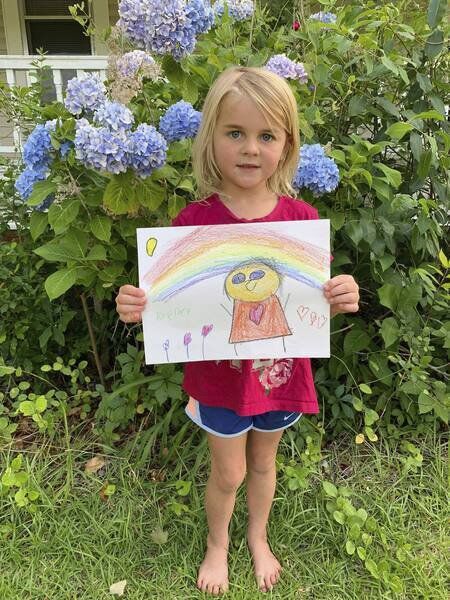 Submitted PhotoReelyn McLean, 6, has been sending drawings of support to Ula.

Submitted PhotoBob Kemerait, professor and extension specialist at University of Georgia, gets his hair shaved in support of Ula.

Submitted PhotoUla shares a note thanking Bob Kemerait for his and other South Georgia residents' help. The little girl lives in the Philippines and has been diagnosed with acute lymphoblastic leukemia.

Submitted PhotoReelyn McLean, 6, has been sending drawings of support to Ula.

TIFTON – A message from the Philippines was sent to Tifton, beginning with “Kuya,” meaning older brother, “I do not understand.”

Bob Kemerait, professor and extension specialist at University of Georgia, received this message from one of his close friends, Rema, at the end of May.

These exchanges are common between them as they learn from one another, but Kemerait knew this time it was different.

Rema’s niece, Rhianna, who goes by Ula, 10, had been taken to a nearby hospital where they live in Navotas Metro-Manila.

That day Ula’s mother, Josiphine, had received a slip of paper with Ula’s diagnosis of acute lymphoblastic leukemia. This type of childhood leukemia is fairly survivable but it requires immediate and frequent treatment, Kermerait said.

However, the doctor informed them Ula couldn’t get treatment in the hospital and they would have to find something else.

Kermerait said this was not done to be uncaring. In a country with no health care system, if you don’t have the funds there is nothing they can do for you. So Ula and her family left the hospital in search of other options.

From Rema’s original message, Kermerait posted on Facebook about the cancer and provided updates about the situation.

Kemerait remembered the last time they visited Rema’s family and as more memories came he realized something had to be done.

Kermerait said he didn’t expect anything to come from this. However, a bing came and he received a message from a high school classmate telling him she had money set aside for Ula.

From there, people started messaging him and commenting on his post: Do you have Venmo, Paypal, Zelle? Can I send a check? Colleagues handed him bills as they passed in the hall. Cash slipped under his office door all with the same message: we want to help.

Kermerait said he never asked for any donations, never expected any, but people continued to reach out.

Sam Gay, owner of Gay’s Food, was one of the first group of people to offer a donation. Gay said he knew Kemerait couldn’t come up with the resources alone and wanted to do whatever he could.

During his time serving as a United States Marine, Gay said he saw children from different parts of the world dying due to the lack of resources and sanitation needs that we have greater access to here.

Seeing Ula’s photo in Kemerait’s posts, Gay said it brought back memories of the children he had seen before her.

“This was an opportunity to be able to help one of those children,” he said. “You can’t help them all but you need to help those that you can.”

Kemerait said they call Ula their starfish, referring to “The Starfish Story” by Loren Eiseley. While there are many starfish – many other children suffering in developing countries, they have the opportunity to help this one.

Nikki Bowman, Kemerait’s neighbor, said she had also been following Kemerait’s post on Facebook. Her daughter, Reelyn McLean, saw the photos of Ula on her screen, asked her who she was, and Bowman told her Ula’s story.

A couple days later, Bowman asked McLean what she wanted for her sixth birthday and McLean replied she wanted her gift to go to Ula.

After talking to Kemerait, they gathered a donation and McLean drew a picture to send to Ula. The drawing inspired Ula and uplifted her after spending days in the hospital, Kemerait said.

Ula replied back with a drawing for McLean and ever since June they have been exchanging artwork with one another.

“She (McLean) was like ‘I have a good friend on the other side of the world,’” Bowman said.

Through the support, Ula was hospitalized for more than a month receiving chemotherapy three times a week. She returned home for outpatient chemotherapy and went back to the hospital July 12 for further treatment.

With her hair starting to fall out, she shaved her head the first week of July and so did Kemerait in solidarity.

“It’s a story that almost makes me cry seeing so many people caring about a little girl that they will never meet,’” he said.