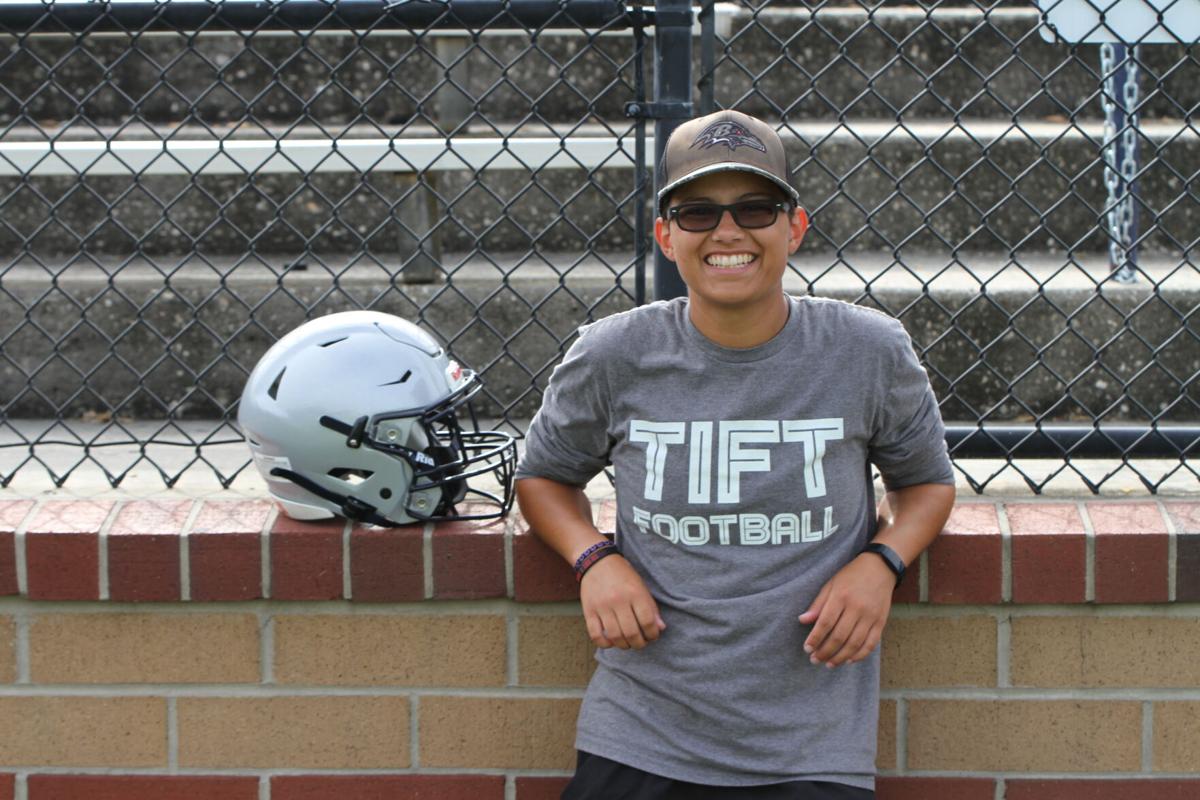 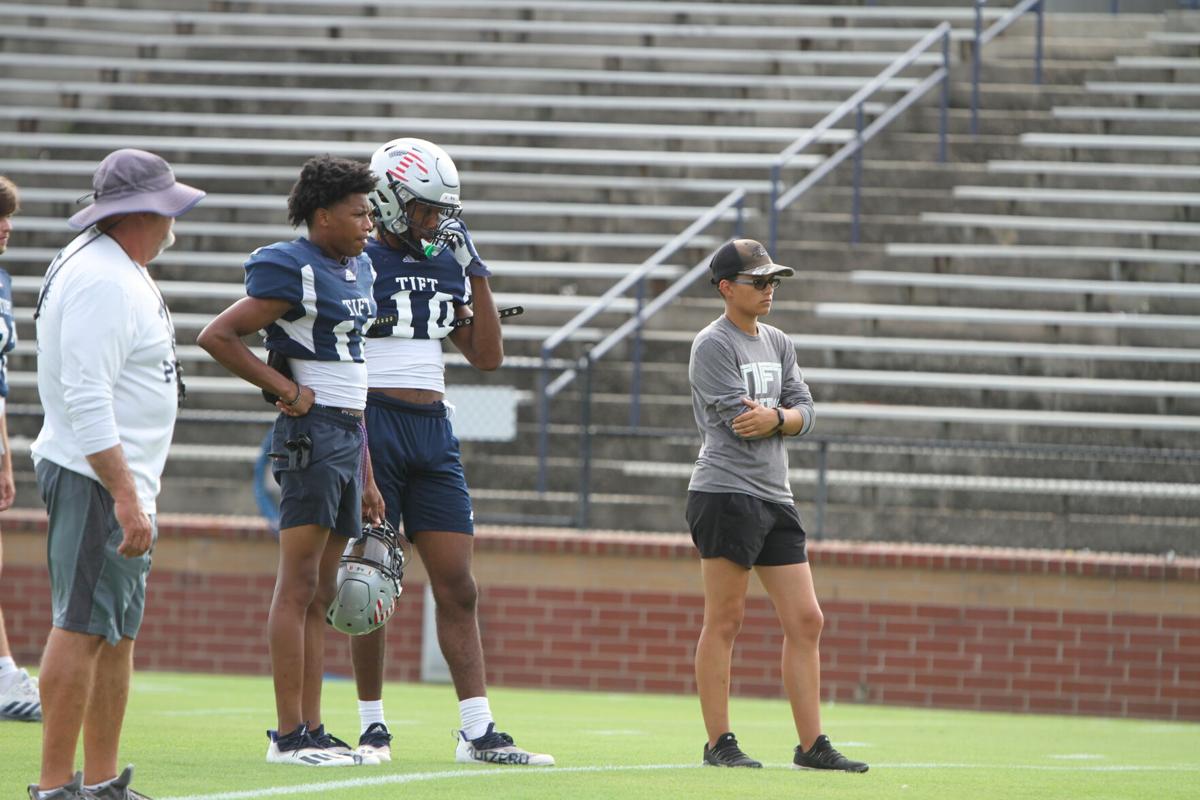 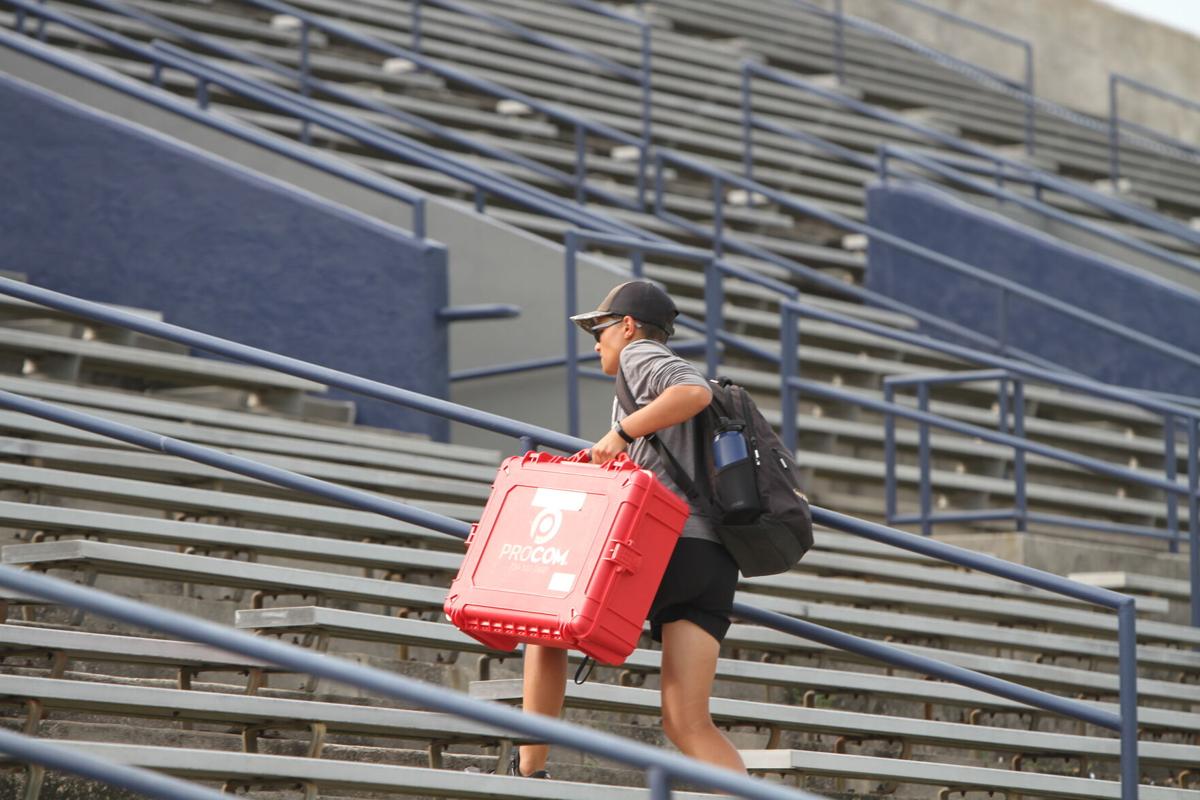 The long haul: Taking communications equipment to the pressbox.

The long haul: Taking communications equipment to the pressbox.

Tift County hired Michigan high school coaching legend Noel Dean to lead its program in January. Plenty of familiar names continue to pace the Blue Devils sidelines, including offensive and defensive coordinators Chris Wade and Mike West, but Dean has brought in new faces as well. One of those is the Director of Football Operations, Sam Mullet.

Mullet hails from Bear Lake, whose township population in Michigan is comparable to that of Omega. Yet, Mullet comes with an impressive background in the sport, one that has led to her receiving national recognition.

There are still things for Mullet to get used to in southern Georgia: Heat, gnats, a lack of snow, not to mention that even if it did snow, there would not be enough for snowboarding. Mullet snowboards and skis. She said she’s trying to come to terms with not being able to do either here.

The director of football operations is a wide-reaching job. She described it as “a lot of logistics” and behind-the-scenes work. Mullet schedules and coordinates events, is in charge of the community outreach for the football program, busing, making sure the players have the equipment they need or even a good meal. Recently, she started tracking quarterback reps in practice.

“I do all the stuff like that so that the coaches can focus on coaching and be on the grass, coaching, and I can do all the off-the-grass kind of stuff.”

Mullet made the big move from Michigan this summer. That’s a big step in mileage, but not a big step in a career path. Mullet has already taken many of those in a short span.

Believe it or not, Sam Mullet’s high school, Bear Lake, did not have a football team when she attended. It kinda did, but not in a way most Georgians would know.

Her high school did a co-op style program for some sports, banding together with other area high schools to have enough for one team in a handful of sports. They did that for football, cross country, soccer and a few other sports. In everything else, including academics, each school kept its own identity.

“It was a way for them to offer all the kids in the area the sports they need more players for.”

Georgia’s had multiple counties band together for a single high school — though Randolph-Clay is the last surviving example — but only a couple of similar co-op situations. Georgia School for the Deaf and Cave Spring were permitted by the GHSA 60 years ago to briefly partner up for football. It’s also similar to how the middle schools in Tift County play football and run cross country.

Though Mullet loves the way her high school in Michigan approached sports, Tift County appeals as well, for the way students are essentially under one banner from youth to graduation.

No shock that Mullet has always been a football fan. She was raised in primarily a Buffalo Bills household, but preferred the college game. Mullet’s family split allegiances between Michigan and Michigan State. High school football, she didn’t always follow.

Bear Lake was in the football co-op, but it was not the home field for it. Mullet, being a typical teen, had other things going on. She saw her cousins play but didn’t make a priority to watch them when she was a student.

Almost as soon as she graduated college, high school football became the center of Mullet’s life.

“I was a December graduate from college,” Mullet began. She came home at about the same time Bear Lake was starting its own eight-man program. “They were putting things in place when I was coming home for Christmas break.”

Mullet’s high school science teacher, John Prokes, had been named the program’s first coach. She had enjoyed Prokes’ classes and the two had chatted about football in the past. Because of their background, Mullet asked Prokes what she could do to help out. She expected to be compiling statistics or watching film. Her role ended up being more than that.

“It took off to where I was calling the plays.”

Prokes’ schedule was full. Besides football, he continued to teach seven different classes each day, she said. The robotics and baseball teams were also under his leadership. “He was kind of swamped,” said Mullet, and asked if she could look more into eight-man.

Bear Lake obtained a partial playbook from another school. Mullet looked over it and began researching further, to the extent she joked she might have researched too much. She watched film online and put together her own playbook on index cards.

Mullet took the research back to Prokes. He was impressed, pushing her, “Why don’t you just keep going? You’ve already done the bulk of it, just keep at it.”

The hard work paid off. Though the overall record reflected a first-year team, Bear Lake scored a touchdown on its first ever play.

Up against an eventual state champion, their first snap saw the quarterback keep the ball and run it for a 65-yard touchdown. “I think that really set the tone for our program going forward, not just for that season, but as a whole,” she said.

Eight-man football is growing in Georgia, but still a new development as it mostly caters to schools with low enrollments. Only this season have the first two public schools — Calhoun County and Stewart County — gotten involved (Baker County has announced it is also starting a program as well). Since the GHSA does not sanction eight-man, the two are playing mostly against GAPPS schools.

Beyond the amount of players on the field at one time, Mullet said the main difference was the size of the field; eight-man’s dimensions are narrower. This puts some limits on edge plays, but she said a talented player could still dominate with speed. Since many players play both sides of the ball, she thinks it promotes a different understanding of football.

Mullet’s work with Bear Lake was quickly noticed, a combination of the newness of the program and Mullet being a female in a rare leading position with a football squad. Newspapers and television stations reported on her. Some of the stories gained a following outside of northwest Michigan.

“They made it to the front office of the NFL,” Mullet said, “and they reached out to me and offered me to apply to go to their Women’s Careers in Football Forum, which they host at the (NFL Draft) combine every year.”

She applied in 2019 and was accepted, earning a trip to Indianapolis, the forum’s location that year. There, Mullet got to rub elbows not only with other women in football, but with front office personnel from around the league.

Mullet notes she was one of the few high school coaches in attendance. She heard Baltimore Ravens coach John Harbaugh speak at a panel and, afterwards, sent him a resume. Harbaugh responded with the offer of an interview.

That led to a conversation with Baltimore offensive coordinator Greg Roman and an invitation from the Ravens to hang out during training camp. She didn’t hesitate in accepting.

“That was the fastest I think I’ve ever replied to an email,” she said.

Mullet speaks highly of her Ravens experience. Harbaugh was always approachable, she said, engaging in conversation during lunch.

“He talked to me personally on the day that I left,” Mullet said, “complimented me on what I had done, and gave me a hug. He was really inclusive and really open to sharing his knowledge.”

The Ravens were inclusive, she said, joking around, answering questions she had. “All of them really great to work with,” Mullet said. “A bunch of great guys.”

Though the Atlanta Falcons probably have the most support of any NFL team in Tifton, she fortunately found herself in Ravens-friendly territory because of Rashod Bateman. The former Blue Devil was a first round selection of Baltimore earlier this year.

Mullet was in Bear Lake when Dean was hired at Tift. She soon heard that he was looking for young coaches who wanted to give South Georgia football a try.

To Tift County residents and their longtime region opponents, the region is the usual grind it’s been for more than 50 years. To outsiders, the region is considered one of the best in the country, despite having only four schools. MaxPreps ranked it No. 6 nationally in 2019. She sees it as a bigger launching pad to the next level than much of Michigan can offer.

Mullet saw Dean’s invitation as an excellent opportunity she would not otherwise get and, after talking with the Bear Lake staff, decided to reach out, not knowing how the conversation might go.

“[Dean] called me back right away,” she said. A few phone calls later, she was on her way.

Leaving Bear Lake was still a tough decision. “I really wanted to be down here and see this, but Bear Lake football is really all I’ve ever known,” she said. “It was a hard decision for me but I was grateful for the opportunity to come down here.”

The transition has been pretty smooth, with Tift’s football staff being very supportive. There was one major difference right away: More players.

Michigan-Football.com lists Bear Lake’s 2021 enrollment as 97. That’s about 40 less than what Tift suits up from grades 9-12.

There is no difference, though, in high school boys nationwide.

“They like to joke, they like to build that relationship with you,” Mullet said. She and the Tift players have already established a rapport. “They’re easy to coach, they’re easy to be around, they’re eager for information.” She’s even noticed that they have her back in situations.

The big question is: How long will she stay?

“I don’t know yet,” Mullet said. “Every time I talk to Coach Dean about how long I’ll stay, the number changes.”

South Georgia is growing on her. And, who knows, Sam Mullet may be mud bogging instead of snowmobiling.