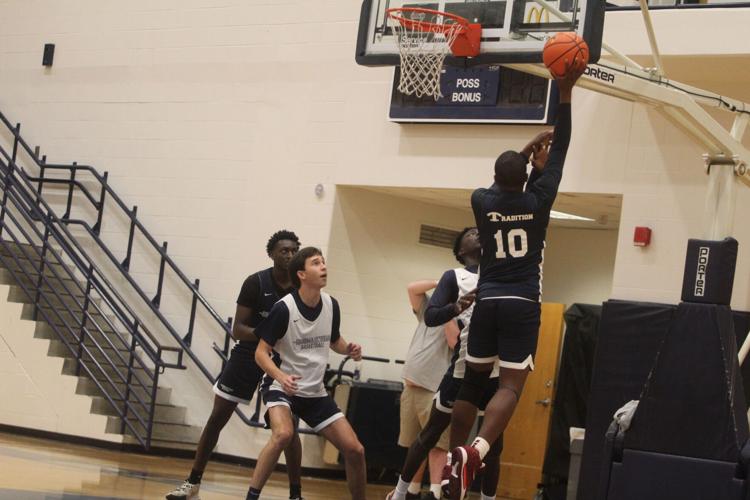 E.J. Office (10) glides to the hoop during the release drill, part of Midnight Madness. 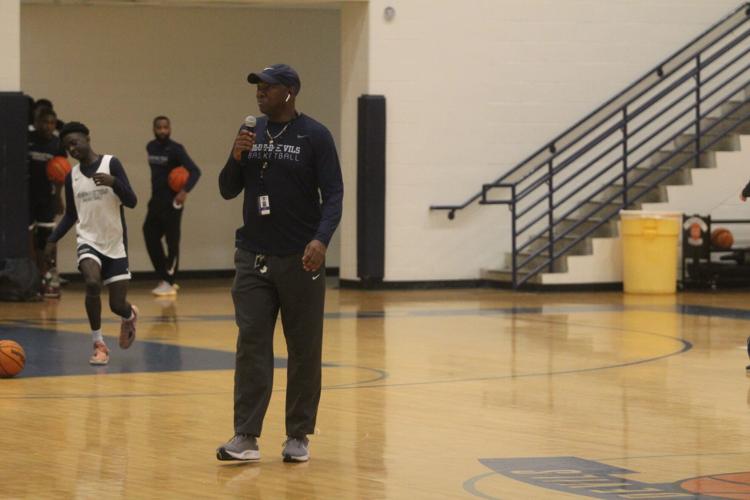 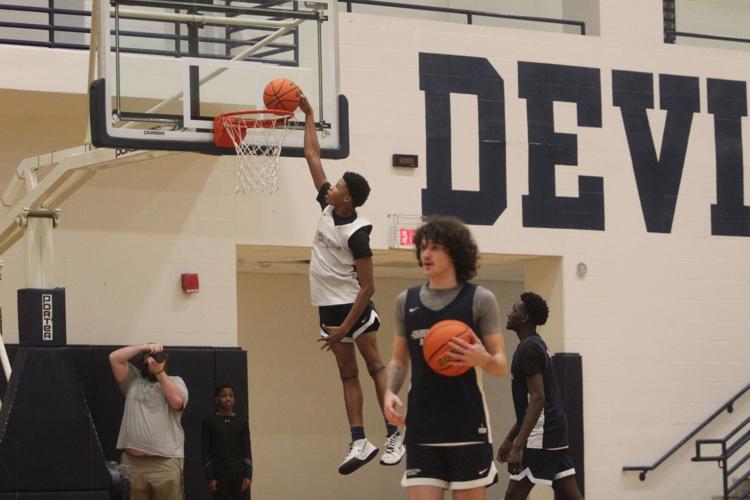 McKyler Horne goes above the rim during the dunking display. 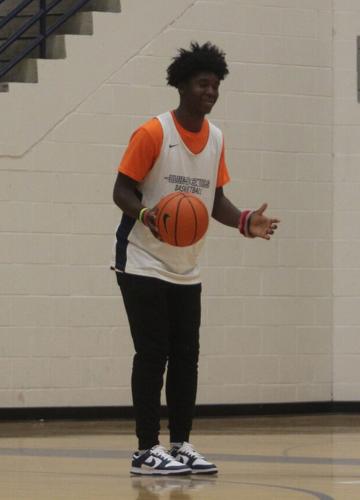 Tristan Boone reacts to Tommy Blackshear kidding him about running faster in football than basketball. 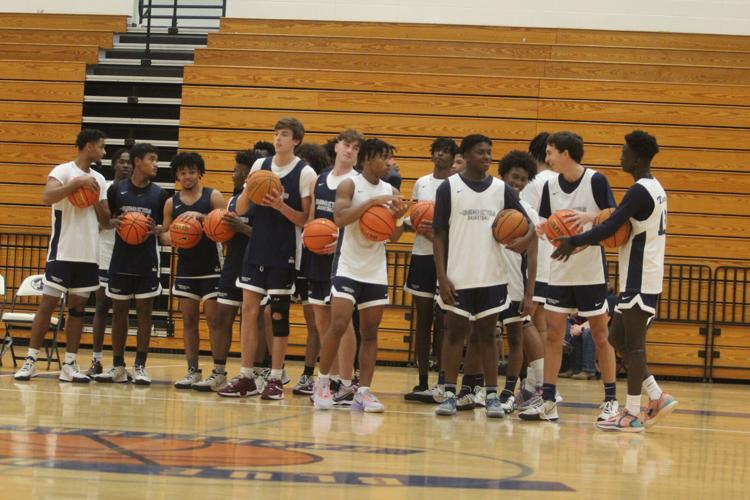 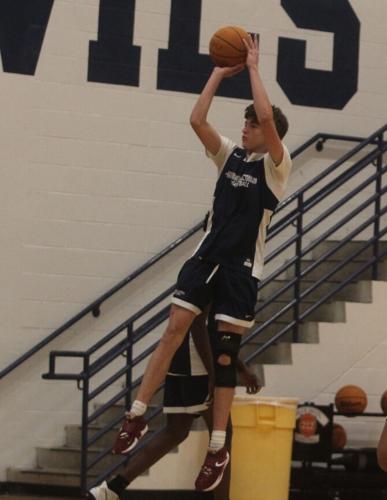 Davis Byrnes fires up a jumper during warm-ups. 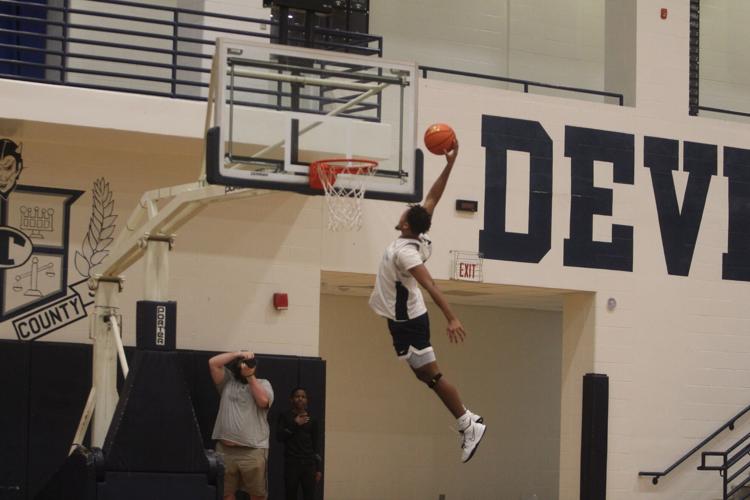 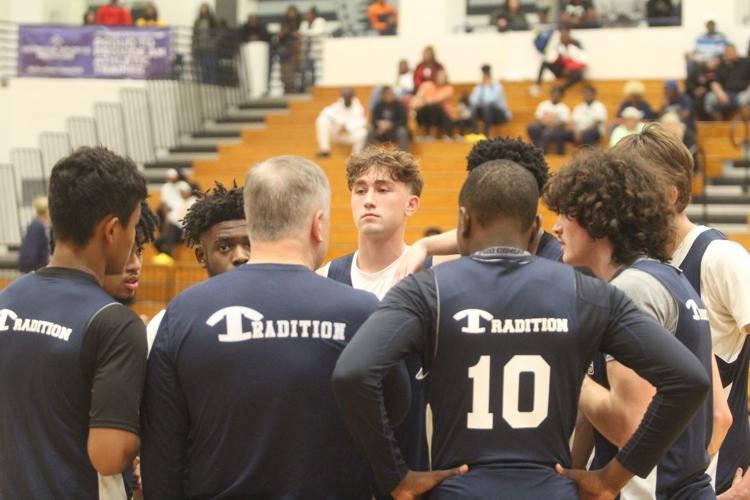 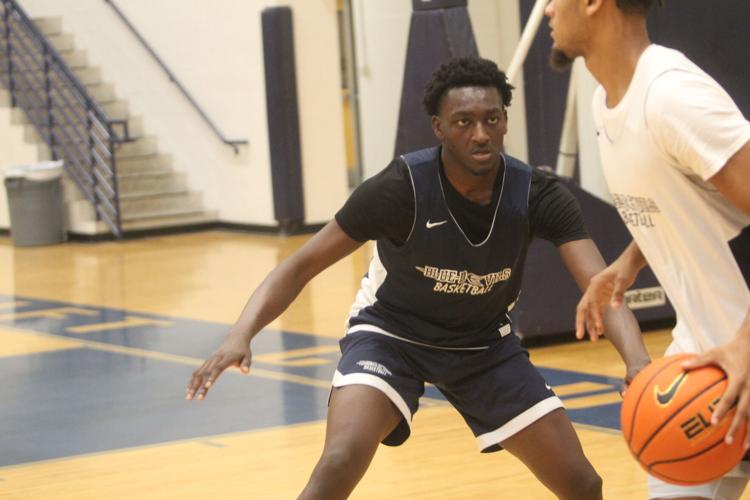 E.J. Office (10) glides to the hoop during the release drill, part of Midnight Madness.

McKyler Horne goes above the rim during the dunking display.

Tristan Boone reacts to Tommy Blackshear kidding him about running faster in football than basketball.

Davis Byrnes fires up a jumper during warm-ups.

The event started with player introductions from head coach Tommy Blackshear and showed off the Blue Devils in a variety of ways. Tift performed drills, had skills competitions and scrimmaged itself for 30 minutes. At the end, Blackshear invited the families and fans in attendance to meet the coaches and players.

At midnight, the fans went home and the players spent the night in the gym. They were to spend most of Saturday together as well, Blackshear describing the schedule as “Practice all day long. Practice and eat, practice and eat.”

Football season ended only a week ago. Tift’s first boys basketball game of the season is set for Dec. 2 at Cook. They will play Dec. 3 at Valdosta before their first home game Dec. 9 against Coffee, the latter of which will be boys only and not feature a girls game.

Player introductions were by grade, starting with five freshmen. These are not all the freshmen in the program, but those who have a chance for varsity, Blackshear said. Two sophomores had their names called, five juniors and eight seniors. All of the seniors and three of the juniors played significant minutes a year ago.

The Devils finished 12-14 last season and finished third in Region 1-7A. Mindful of the squad’s long history of excellence, coaches and players were not satisfied with how 2021-22 ended.

“We loaned our region championship banners for one year,” said Blackshear of the team’s postseason attitude for this season.

They’ll have a new group to conquer. Reclassification shifted Tift from Class 7A to 6A. For the next two years, they will be in a region with Thomas County Central, Lee County, Houston County, Veterans and Northside of Warner Robins. Colquitt County and Valdosta are on the non-region slate, giving Tift a connection to their former conference.

Shooting accuracy was on display in the two skills competitions, three-pointers and free throws.

Semifinals for three-pointers were Te’Shun Bryant versus Mills and Gebhart versus Parker. Gebhart won his side of the bracket with seven triples to Parker’s two. Bryant and Mills tied at six each, setting up an overtime, won by Bryant. Bryant continued his hot streak in the finals, knocking down nine threes.

Free throws needed another extra session before the finals. This time, any momentum it built was for naught: Clark was on fire.

Clark nailed all 10 in the semifinals, then the next 10 in the championship to defeat Farrie. “Pretty doggone good,” said Blackshear. Clark added one more in the scrimmage to finish a perfect 21-of-21. Morris and Gebhart were the other Tift competitors.

The slam dunk session gave everyone a chance at the goal and as often as they wanted during that time. A few surprised even their coaches by reaching the rim. Traditional slams, windmills and alley-oops were all attempted.

In the scrimmage, which was game length, but nonstop, Blue defeated White, 42-33. Blackshear promised the Blue Devils would be even smoother when the season began.

Beyond the fan support — admission was cash, detergent or sports drinks — Tift’s drumline was in attendance to provide more hype.