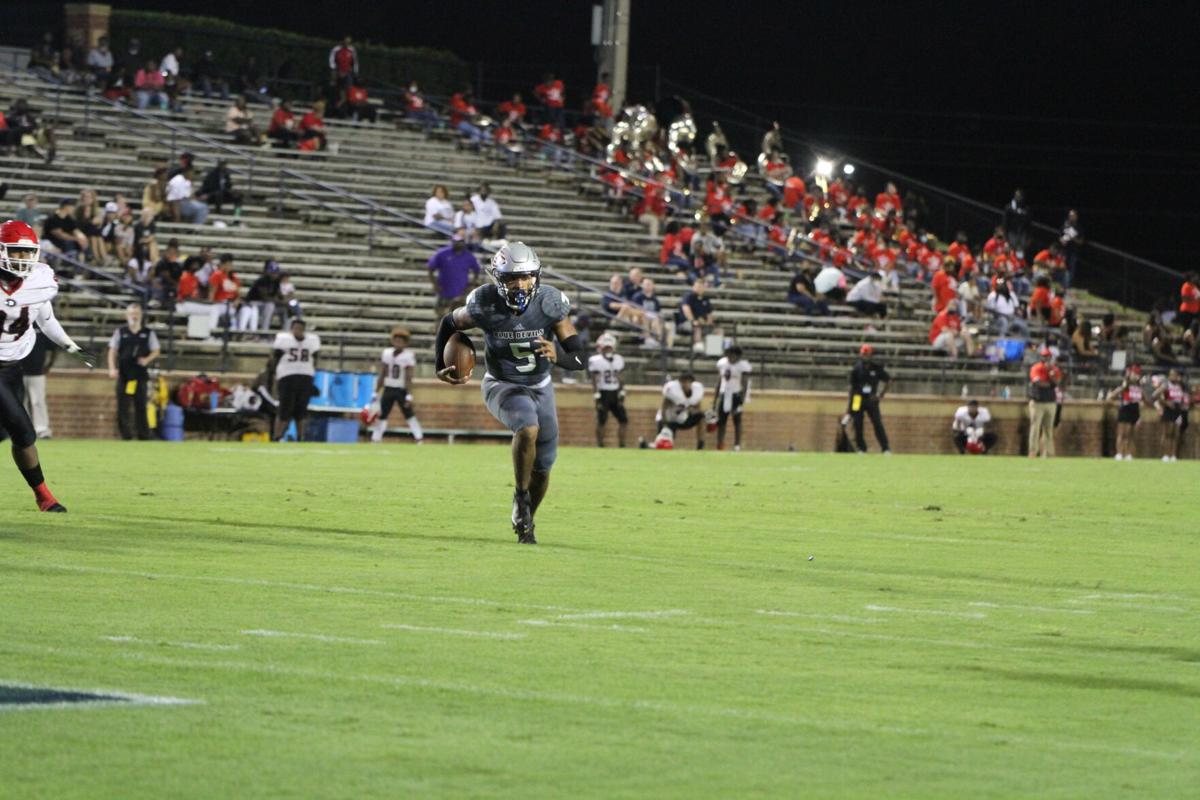 Tyler Parker spots the opening that allowed him to run 10 yards for Tift County's first touchdown against Dutchtown. 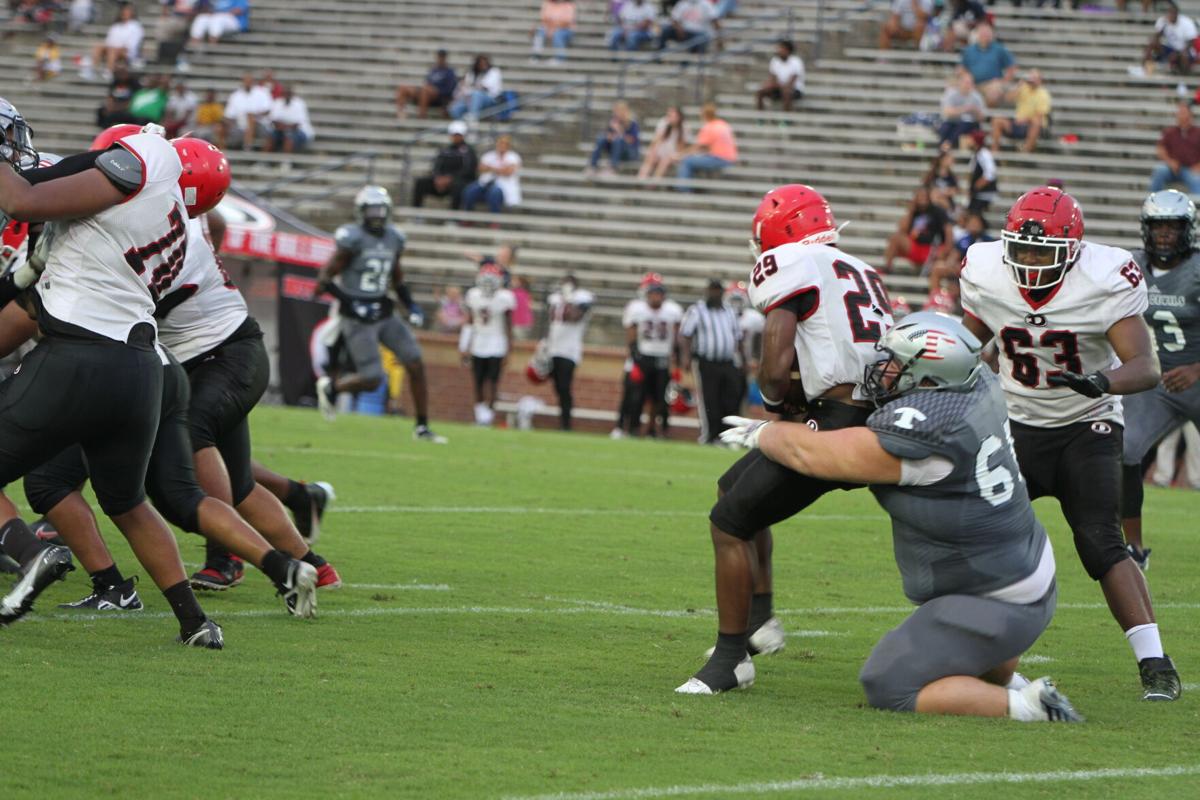 Tift's Clinton Farmer (65) twists down Amarion Yarbough for a loss.

Tyler Parker spots the opening that allowed him to run 10 yards for Tift County's first touchdown against Dutchtown.

Tift's Clinton Farmer (65) twists down Amarion Yarbough for a loss.

TIFTON - Twenty-two seconds. That's all it took Friday to turn a tie football game into Tift County domination and, ultimately, a rout. The Blue Devils defeated Dutchtown, 23-7, on Senior Night.

"It was a great team effort," said Tift head coach Noel Dean. The Blue Devils improved to 2-0, their best start in four years. "We came out the second half and did what we wanted to do."

The score was 7-7 when Antonio Gomez booted a 31-yard field with nine seconds remaining in the third quarter.

Dutchtown got the ball back for a single play to end the period, one that saw Bernard Tindall demolish a receiver for no gain. The enthusiasm carried into the fourth.

After an incompletion on second down, Za'morian Brown jumped the receiver's route and zipped down the visiting sideline for a 25-yard score at 11:47. Gomez was true on the kick. Now, at 17-7, Tift's victory was not just hopeful but inevitable.

It didn't take long for the hole to grow deeper for Dutchtown.

Their first play from scrimmage after the touchdown was a strip sack, with Jonta Strozier falling on the football at the Bulldogs' 6.

Tyler Parker nearly punched it in on the next play, but the Devils had to wait until third down for Zach Carter to burrow his way into the end zone. The kick bounced off the upright, but the score was 23-7.

With 10:21 left in the game, all the Devils had to do was wait. Dutchtown didn't make them bite their nails.

Bryce Clavon threw up a desperation pass to Michael Howard for 36 yards, but it was the lone first down of the second half for the Bulldogs. It was also one of only four plays in the second half to gain positive yardage.

Carter had a 46-yard run to get Tift away from its own goalposts later in the fourth. The rest of their snaps burned clock and lots of it.

Friday's first half was somewhat of a different tune for both teams. Dutchtown scored, Jamal Bing going in with 2:38 to in the half.

The yellow flags gained as much as the two teams on the field. The teams combined for 100 yards in penalty yardage. Neither team individually had as much in total yardage.

Tift got a first down on its first drive on a run by Parker. Dutchtown had two on its third drive, the big gain being 33 yards by Clavon to Tift's 40.

Any hopes for an early score by Dutchtown were dashed, however, by a Bubba Ellis sack. The drive ended in a punt.

The Blue Devils had a lone first down in the second quarter and two punts. The last punt saw Dutchtown start at at the 49. One play later, Bing ran to the 8.

The Bulldogs got three yards from Amarion Yarbough and shook off a false start before Bing angled his way for a touchdown at 2:38. No. 38 provided the extra point.

Dutchtown's lead held to halftime and almost half of the third quarter.

At first, it seemed as if the Bulldogs might actually double their lead.

Bing had a strong punt return to land Dutchtown at Tift's 22. Their confidence would have only grown stronger when the first play from there went to the 19.

Then it all fell apart.

A hold, an incompletion and a completion for negative yards meant they were on the 33. Too far for a field goal try, so Dutchtown punted. The kick went straight up in the air and was downed after a mere eight yards.

The tide, so thoroughly in Dutchtown's favor a minute earlier, abruptly shifted course.

Parker burst for 51 yards on a keeper. He was tackled at the 26, Tift's best penetration yet.

Carter gained four and, on third down, Parker got enough to move the sticks.

From the 10, Parker rolled left, then made a run for the pylon. He stretched the ball as far as he could and made it by a hair at 4:57. Gomez's kick sailed through the uprights and Tift had a tie.

Twenty-two seconds sealed the game for the Devils at the end of the third and beginning of the fourth quarters. In between Parker's touchdown and that span was another huge play.

The dreaded penalty monster took the Bulldogs from third down and a yard to go to third and 11 at their own 30.

Clavon dropped back to pass, but ran into Shawn Lindsey, who forced a fumble. Strozier scooped it up and ran it back to the 11.

Dutchtown held Tift to a field goal on the possession, but time and energy had ceased being in their favor.

Dean said his team started a bit slow, which he said was the fault of coaching decisions.

"We went in at halftime and made some adjustments," he said. Dean said both sides of the ball did a good job in the second half.

Tift forced three turnovers in the second half. Two were fumbles recovered by Strozier, his third fumble pick-up in two games. Brown's interception touchdown gave the Devils two defensive touchdowns for 2021, double their number for 2020.

On offense, Parker ran for an unofficial 105 yards and a touchdown on 14 carries. Carter added 91 yards and a score on 12 attempts. Parker completed three of nine pass attempts.

The Blue Devils will play Banneker at Brodie Field next week. Banneker (1-1) fell at Denmark in their latest game, 20-14.