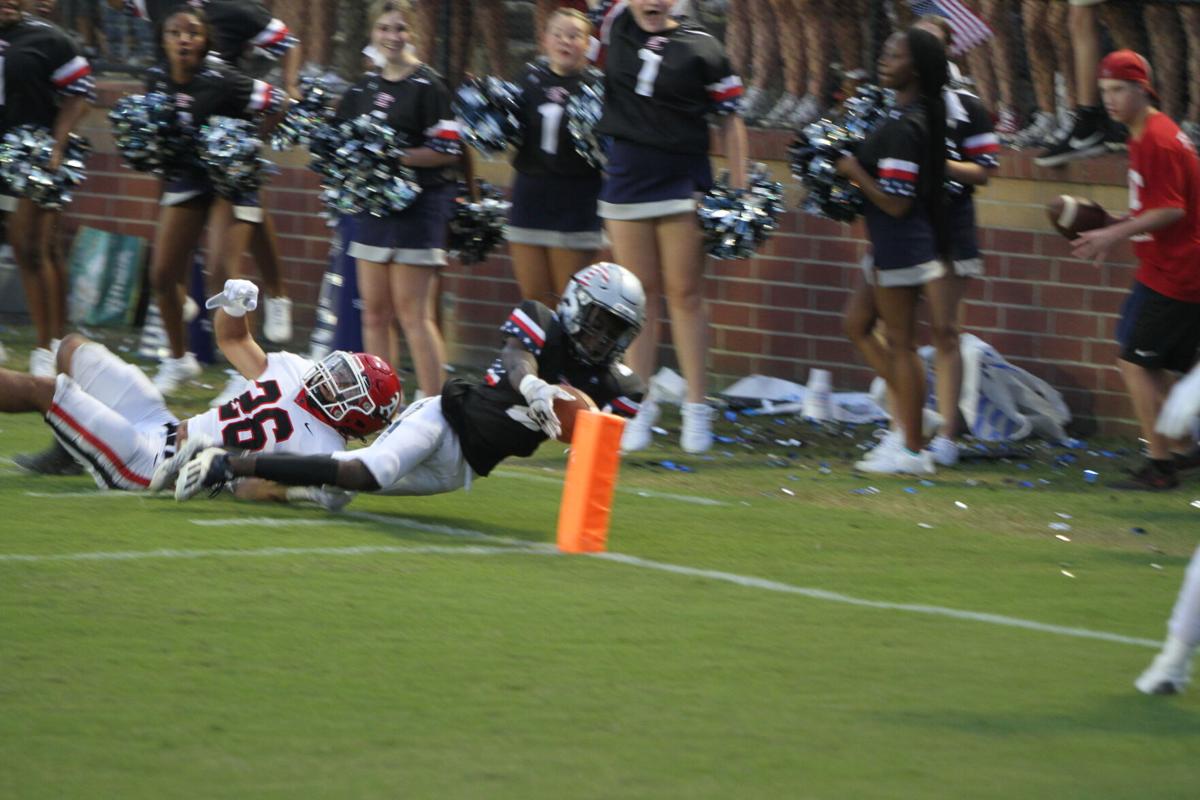 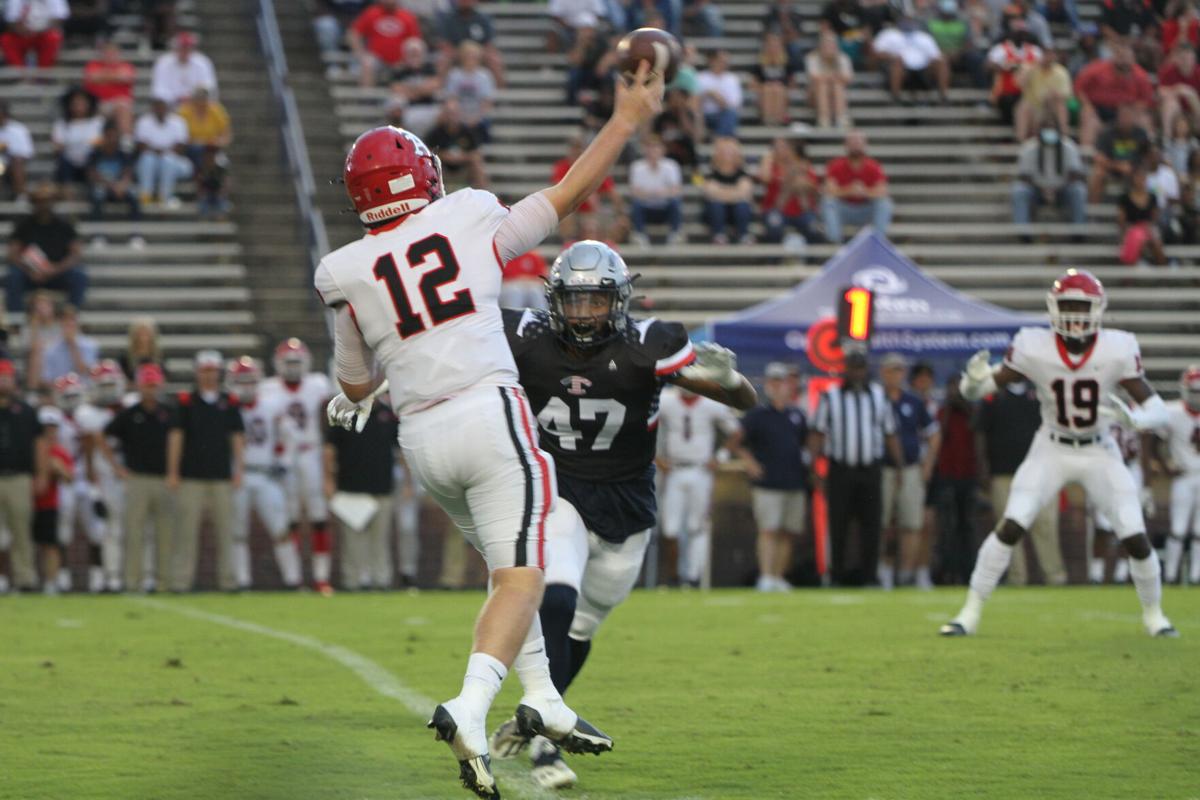 Appling quarterback Dayson Griffis gets a pass off in the nick of time from a charging Shawn Lindsey.

Appling quarterback Dayson Griffis gets a pass off in the nick of time from a charging Shawn Lindsey.

TIFTON - Appling County employed a bevy of running backs Friday and stopped Tift County's winning streak in its tracks. The Pirates came up with 17 second half points after a 7-7 tie at halftime.

Tift forced four turnovers in the game, bringing their season total to 13. However, an injury-riddled offensive line struggled to move against a staunch Appling defense.

With both teams preferring to do their work on the ground, the initial series for each side saw their biggest plays through the air.

The Blue Devils were hit with an illegal formation penalty immediately after kickoff. Not positioned on his own 22, Tyler Parker hit a wide open C.J. Henley in stride, with the receiver blazing down the field for 59 yards until he was caught at the 19.

Parker ran for a first down at the 9, then gave to Timothy Wright. Wright ran around left end, and Appling defenders, reaching over the pylon for a touchdown at 9:23.

Antonio Gomez kicked the extra point and it was a quick 7-0 lead.

The first play from the Pirates saw Dayson Griffis complete to Jamori Wright for for a short completion. Dennis Mims picked a first down and though Appling was hit with a dead ball personal foul, they steadily kept moving.

Taylen Crosby picked up 18 on a catch, then it was Jarvis Mims running for another. Having inched their way to the 1, Mims carried it the final yard at 3:17. Alex Garcia knotted the score with the point-after kick.

After that, both defenses settled in for the remainder of the half.

The second quarter saw four turnovers between the two teams, three by Tift.

Za'Morian Brown picked off a pass lofted into the end zone, resulting a touchback. Appling soon forced a punt, but gave it back immediately when a swarm of Devils forced a fumble at their own 39.

Crosby came away with an interception in Tift territory, but the Bucs handed it over yet again after a single snap, Bernard Tindall poaching an Appling pass at the Devils' 37.

The Blue Devils went on the move again after the pick, Zach Carter running six straight times, going from the 39 to the Pirate 20.

Appling held firm here and Parker just missed a pass to a receiver near the goal line on fourth down.

Tift caught a break at the start of the third when a personal foul nullified part of Crosby's 66-yard kickoff return. Pushed back to the hosts' 44, the Pirates began a technique that worked well in the second half: steadily inching along.

It took nine snaps for them to reach the 12, where they finally bogged down. Garcia put Appling ahead for the first time on a 29-yard field goal at 8:20.

Near the end of the third, the Pirates ran 11 plays in a 58-yard drive, finishing with a three-yard run by Mims at 1:43.

Only two plays on the drive covered more than four yards, the big one a 20-yard pass from Patrick Crosby to Taylen Crosby.

Appling recovered a fumble in the fourth and almost scored again before Lezarious Jackson covered a fumble at the 1. Taylen Crosby added a final Pirates touchdown when he took advantage of a loaded Tift box to burst for 45 yards.

Wright closed the book on turnovers with a final pick for Appling.

The game was Red, White and Blue Devils night. Being one day removed from the 20th anniversary of the Sept. 11 terrorist attacks, the game was a patriotic experience.

Veterans joined the football team for the Devil Walk and Tift played in special uniforms with military members' names and insignia printed on them. Rep. Austin Scott was the guest of honor coin flipper and, prior to kickoff, Georgia Gov. Brian Kemp had a special personalized message about the nature of the contest.

Fireworks lit up the skies after the final horn.

Tift suffered its first loss the season and are now 3-1. The Pirates, No. 7 in the Georgia High School Football Daily rankings for Class AAA, move to 4-0.

The Devils will host Irwin County next week. Irwin, getting a last-minute home game from Wilkinson County, rolled in the contest, 63-0.