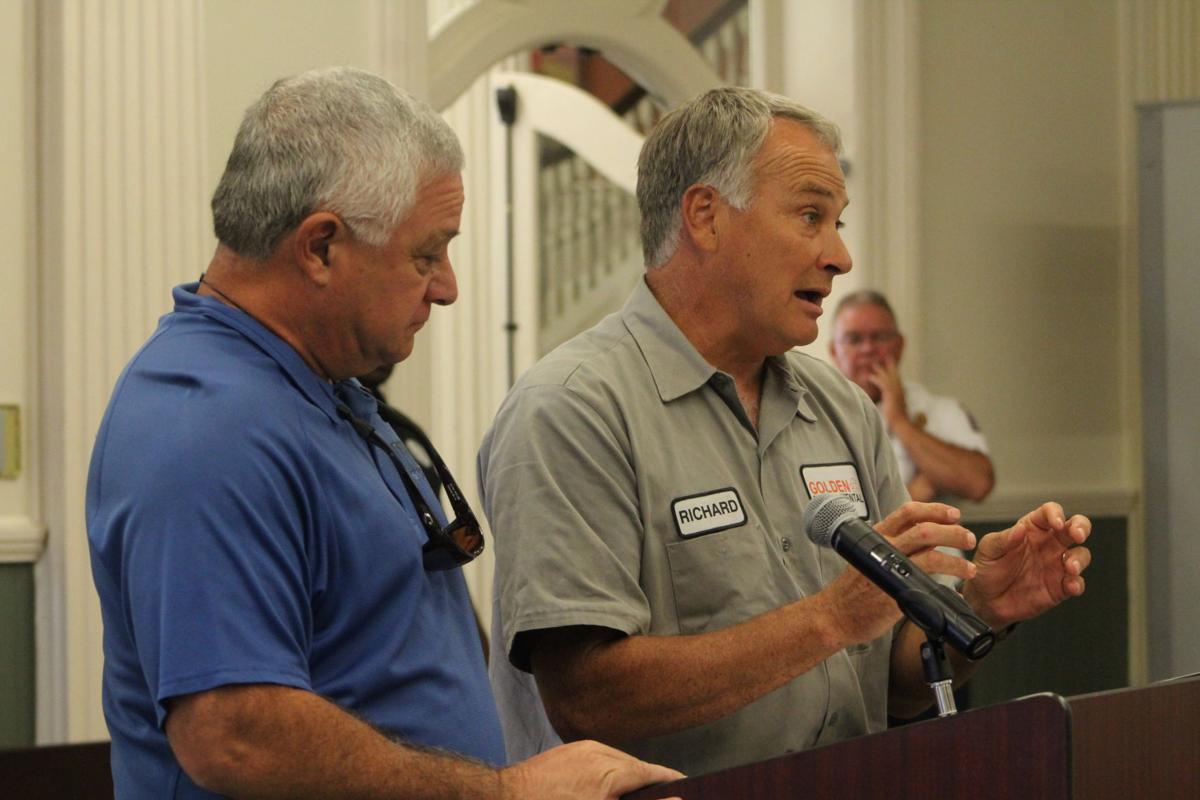 Richard Golden answers questions about revisions to the city’s agreement for trash pickup with Golden Environmental. 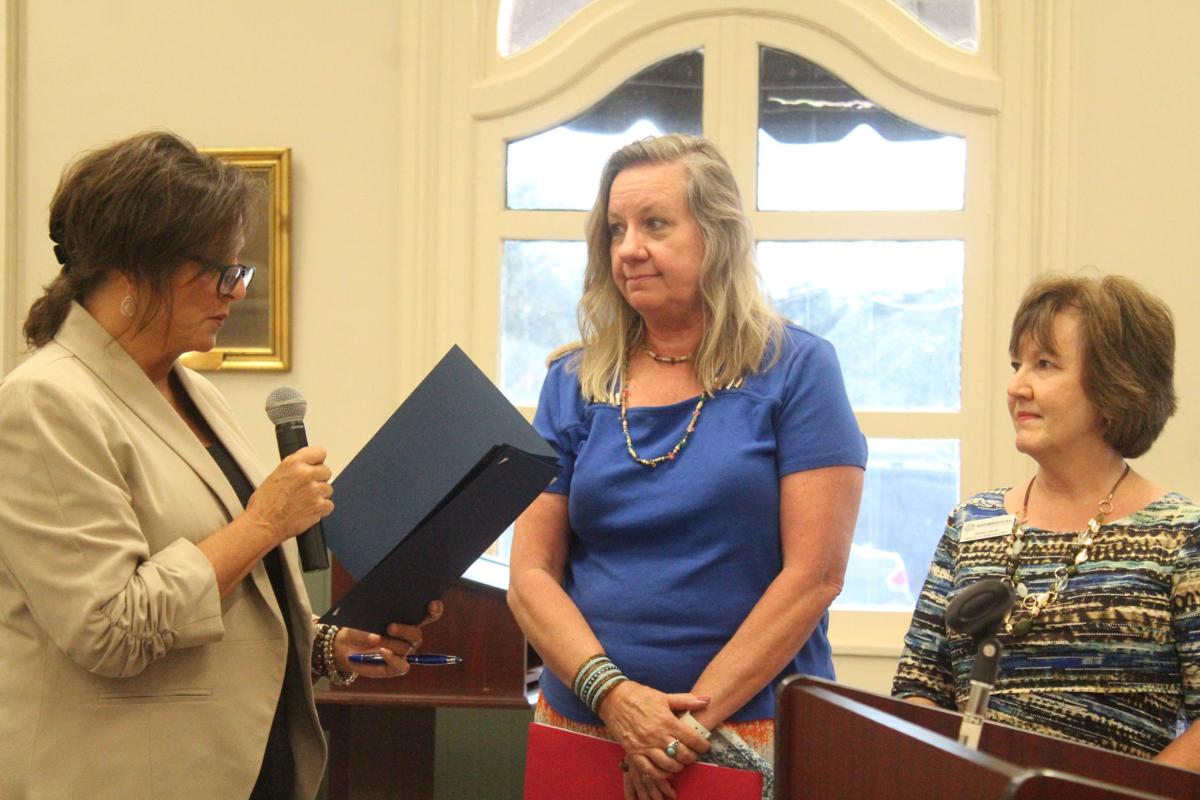 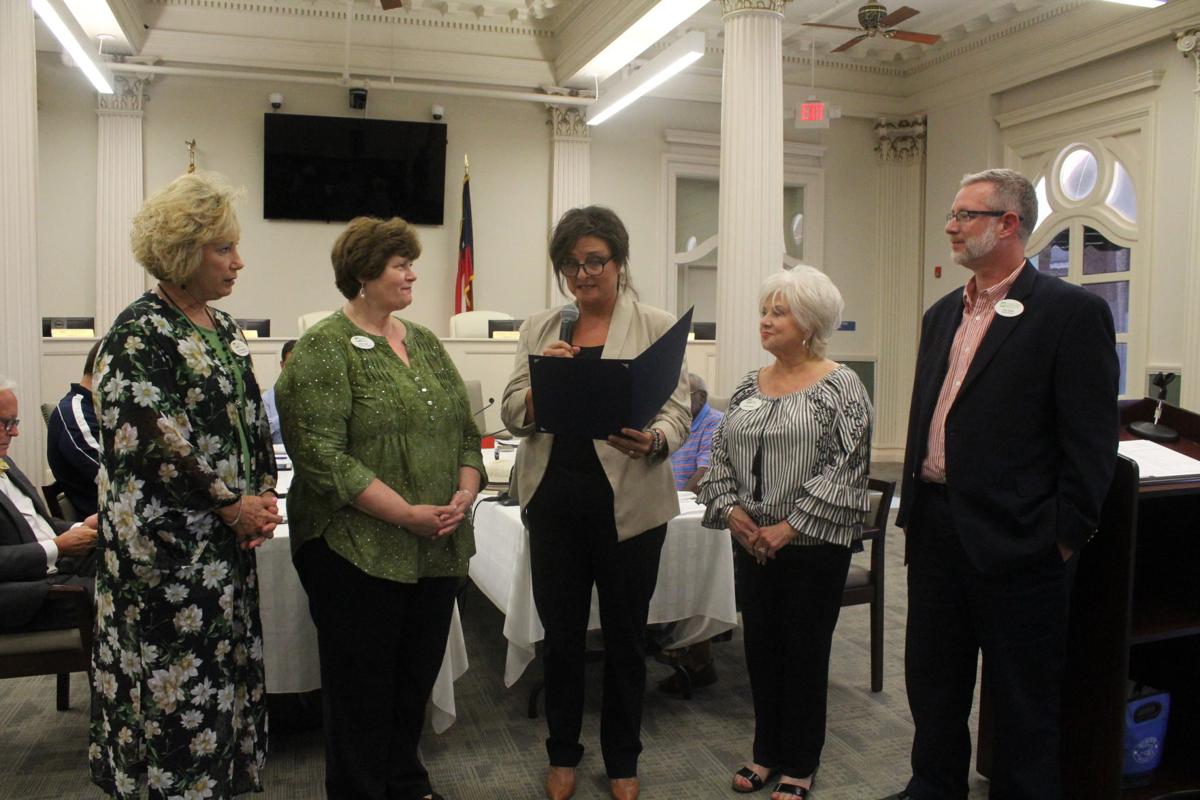 Richard Golden answers questions about revisions to the city’s agreement for trash pickup with Golden Environmental.

City Manager Pete Pyrzenski reviewed the changes to the contract that were made to clear up any grey areas and address ongoing problems.

These changes include adding a pilot program for once a week yard waste and bulk item pickup, as well as defining what counts as bulk waste, which is included in each customer’s monthly bill, and what must be billed as a special pick-up.

Richard Golden, owner of Golden Environmental, said that the special pick-up is meant to solve the problem of landlords evicting tenants and putting an entire apartment or house’s worth of furniture and belongings on the curb.

The council discussed details about the amendments for nearly 40 minutes. Other changes to the contract address leaking trucks and spills, customer service complaints and customer education.

Golden said that he has hired someone to focus solely on customer complaints and resolve them in a timely fashion.

Council member Frank Sayles said that the service has improved recently and he hasn’t received as many complaints as in the past.

Brandon Howard, City of Tifton liaison, presented findings from a look at how the city bills utility customers and deals with late payments.

Council member Wes Ehlers has previously raised the question of how late fees and reconnect fees for utilities are levied and if the city can do anything to help those who are consistently late on making payments.

Ehlers suggested other mechanisms to prevent service cut-offs such as a budget billing option, where a customer pays a flat rate every month based on the yearly average water use, and allowing a 10 day grace period before a late fee is assessed.

“I’m just trying to think of different ideas, think outside the box,” he said.

He said that he compared Tifton’s cut-off numbers to surrounding areas and found the percentage was much higher.

“For example, looking at Albany, which has 37,000 accounts and they’re cutting off the same amount of people as we are,” Howard said. “We’re only dealing with about 6,400 residential accounts. So we have a high, high percentage rate when it comes to disconnections.”

“It’s disturbing,” council member Jack Folk said. “They’re not not paying the bill because they’ve got all the money and they just don’t want to pay it. They don’t have the money. So then it gets cut off and there’s $50 that they didn’t have in the first place to pay the bill, because if they’d had it they’d have paid their darn bill and they never catch up. How do we get some of these people out of this?”

“I’m not going to call them ‘offenders’ because they’re probably doing the best they can do, and we just add insult to injury,” he added.

Howard informed the council that the customer service department has various mechanisms to help customers make their payment. The department makes courtesy calls to every customer who has not paid before the date for service cut off and customers have the opportunity at that time to let the city know when they think they may be able to make a payment. Each customer also has the right to request an extension once per year.

Seniors and disabled veterans who receive benefits may also show the city paperwork indicating when their benefits are dispersed and are allowed to make their utility payment on that day. No other customer has the ability to select their billing date, which is based on when they started their service.

Howard advised updating the current policy, which he said hasn’t been looked at since 2012 and was drafted based on a computer program the city no longer uses.

Pyrzenski suggested looking at the repeat accounts and asking if there are any other billing cycles, such as Georgia Power or cable companies, to see if there are several things hitting all at once.

“If you have your utility bill, your electric bill and something else hit all at the same time, it can cause monthly hardship for one check families,” he said. “That’s an idea to look at.”

• ESG Project Manager Jeff West presented a review of an amendment to the city’s agreement with ESG, which Pyrzenski said is an increase of $65,000.

• Pyrzenski said that the city needs to draft a small cell ordinance so they can exercise some local control over 5G network extender boxes going up within the city limits. State and federal regulations are making it easier to put these boxes up to support 5G networks, but cities do have some limited local control regulating them in historic districts so long as the city has such an ordinance on the books 30 days before an applicant seeks to install a box.

• City Clerk Jessica White presented recommended changes to the transient merchant ordinance, which regulates merchants setting up temporary stalls to sell items. Currently the ordinance requires a merchant to request a permit each time they wish to set up. White proposed requiring a one-time yearly permit.

• White presented a recommendation regulating brown-bagging in local establishments who wish to allow that. She mentioned arts and crafts shops that host paint and sip activities where customers bring their own wine or beer as an example.

• White asked the council to consider making changes to the mobile food unit ordinance, saying that while there has been interest expressed in food trucks, the local ordinance is so restrictive it effectively blocks the trucks from setting up.

The workshop is a non-voting meeting where the city council and mayor meet to discuss ideas and review proposals before voting at the regular meeting, which will be Sept. 16 at 5:30 p.m. at Tifton City Hall.